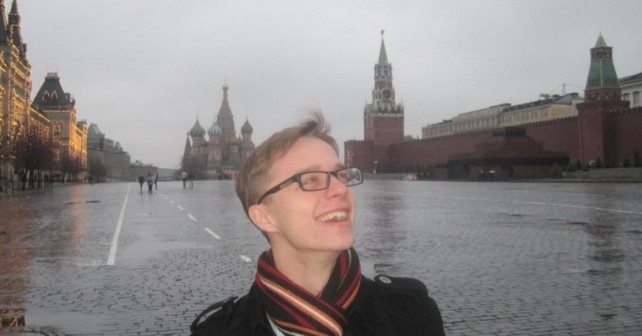 The author is a digital-specialist Alexey Minakov, ‘Novoe Vremia’ [New Time]. The photo above shows Alexey Minakov on the Red Square in Moscow. This photo is from his own archive of 2013.

We were so wrong thinking that, after the last year stories about the crucified boy in the Sloviansk city and two slaves for National Guard soldiers, Russians ‘hit rock bottom’! As it turned out it was only the beginning of the series of nonsense ‘masterpieces’. Moreover, the distribution of the meaningless information achieved some results – the Russian people swallowed it with pleasure. In contrast to their neighbors, the Ukrainians observe the nonsense of the Russian news media in order to improve their mood. Below you can find the summary of the most striking fakes from the last year, which got in the shame and decay history of the Russian journalism for ever.

1) The drunken black soldiers in Debaltseve dancing on the tanks and poking people with rifles.

LifeNews TV channel issued news with the incredible story starring a ‘Debaltseve resident’: “The armored vehicle is moving along the street with drunken negroes who are dancing on it and pointing their rifles at people… The grandmother goes together with her granddaughter, and they pointed the automatic weapon at her, grandmother falls on the ground and soldiers are standing and laughing”. I hope that recently announced staff reductions of 30% will damp ardour of this ‘Goebbels’ TV channel at least a bit.

2) The tourist flow to the Crimea is dramatically increasing.

The propagandists filmed the video ‘In short, heading the Crimea’, and afterwards started to manipulate the figures, so ‘NTV’ channel informed about the increasing of tourists flow for 70–80% as compared with 2014. Unfortunately, they forgot to mention about the almost complete absence of tourists on the peninsula the last year because of the annexation. Therefore, the holiday season failed in Crimea the last year, and no improvements are expected the next year due to the energy blockade.

The ‘Komsomolskaya Pravda’ [Komsomol Truth] publishing house posted staged video from the cabin of the ‘Buk’ anti-aircraft missile system, which had to prove that the Ukrainians were implicated to the Boeing aircraft downing in summer of 2014. However, the fabricated record does not look as bright as the last year’s version that all passengers of the plane were already dead

4) Yatsenyuk warred in Chechnya and participated in the torture and shooting of the Russian captives.

The head of the Investigate Committee of the Russian Federation in his interview accused Arseniy Yatsenyuk the intelligent Prime Minister of Ukraine of fantastic atrocities. Afterwards even Ramzan Kadyrov, the head of Chechnya, disclaimed this idiotic statement.

5) Saakashvili had a sex with an underage mistress-transvestite.

The ‘NTV’ TV channel showed almost a one hour story called ‘In bed with Saakashvili’, in which it shocked the viewers by the revelations of the so-called secret mistress of governor of Odesa Oblast. It is not a secret that pretty young ladies join the team of Mikheil Saakashvili, but having a sex with an underage blonde, who appears to be a male, this is really too much, and the secretary of the Mikho did not even bother to comment this.

6) Drunk Poroshenko who wanted to get to Putin was removed from the flight Kyiv – Moscow.

‘Moskovskiy Komsomolets’, ‘Rent-TV’ and other Russian media distributed the ‘canard’ that the President of Ukraine was caught drunk at the airport and wanted to fly to Moscow urgently. The representatives of the German broadcasting company, which was mentioned as the source, disproved this nonsense.

7) The Distraught by the Russophobia Ukrainian-Nazis demolished the ‘Mother Motherland’ monument savagely.

A post appeared in the ‘Odnoklassniki’ social network where the ‘Mother Motherland’ monument was shown without the head and with an inscription ‘have you jumped enough?’. Many pro-Russian societies in the social networks reposted this ‘sensation’ with pleasure. In reality, this photo was taken during the construction of the monument in 1980.

8) The Ukraine became one of 60 countries-enemies of ISIS.

There was a video footage made allegedly by the ISIS, which listed the organization’s enemies including Ukraine and other peaceful countries. The experts noticed that author’s stylistic is similar to other products of Russian ‘My Duck’s Vision’ studio, which became famous for its virus videos about the deposits of iPhones on the ocean floor and about the network of McDonald’s secret bunkers.

9) Thousands of the Ukrainians rejoice to the crash of a plane with the Russians in Egypt.

The army of the Russian trolls, pretending being the Ukrainian users, posted cynical comments in various internet resources and social networks as if celebrating the disaster. The loud statements immediately appeared in the Russian mass media saying that the Ukrainians are soulless although many Ukrainian politicians expressed their condolences, and ordinary people brought flowers to the Russian embassy.

The blatant Russian fake was spread by many Ukrainian periodicals but it couldn’t become a breaking news because the General Staff of the Ukrainian Armed Forces promptly reacted on this stovepiping and posted in Facebook the following: ‘Santa Claus will not visit the people who spread rumors and unverified information’.

Moreover, we did not mention a huge amount of hypocrisy that sounded from the ‘Kremlin megaphone’ infamous broadcasters – Vladimir Solovyov, Dmitry Kiselyov, Petr Tolstoy. There is no doubt that Russia will continue to distribute more and more low quality stovepiping using their state monopoly on mass media, but it will just create another occasion for laughter in Ukraine. Really, aren’t the Russian people tired to listen these fairytales?