Donetsk Christian University Has Been ‘Transformed’ Into A Russian Military Base 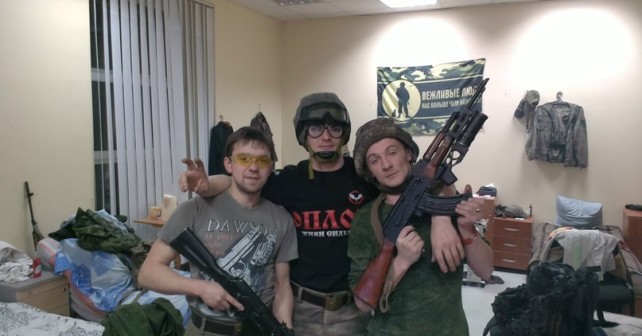 Our InformNapalm international volunteer community has identified another military base of the Russian occupation army: this time it is based in the Donetsk Christian University (DCU) territory; all relevant pictures are enclosed.

The territory of the University was occupied by the Russian terrorist groups back in 2014. Mikhail Cherenkov, a former rector and Protestant theologist wrote on his Facebook page (ipres.ua): “July 9, 2014; the terrorists have intruded the University and announced ‘the order’: based on martial law the Donetsk People’s Republic (DPR) enforces its authority over the DCU – its property and equipment including”.

“Today we were allowed to take PCs, documentation, and personal belongings. Even this limited opportunity made people happy. The territory of faith has been transformed into the one of hate; a house of prayer is a criminal hideout,” – Cherenkov wrote in 2014.

Today the DCU is a Russian military base equipped with the video cameras and firing points along the fence line, which provide necessary security in case of the Ukraine’s army attack.

A so-called ‘elite division of the DPR army’ is based here; it is a Russian terrorist ‘2nd storm company of the DPR Republican Guard special forces brigade’.

Here is some additional reference material. A significant number of terrorists have been observed at the base including the representatives of ‘Pyatnashka’, ‘Cheburashka’, ‘Buratino’, and other detachments. We’d like to explain the following: the Russian hostile military forces try to create a variety of the ‘companies’ and ‘battalions’ consisted of 2-3 individuals, so there is no sense in any attempts to understand a structure or an order of these Kremlin-backed terrorist groups. It looks like there will be more ‘names’ of such groups in Donbas than the mercenaries themselves. While Ukrainians do not believe in the continuous changes of the military organization, easily-scared Europe can be mislead and frightened expressing deep concern over an increased number of the Russian military forces in Donbas. But this is a usual way the Kremlin operates here trying to confuse and misinform the public. 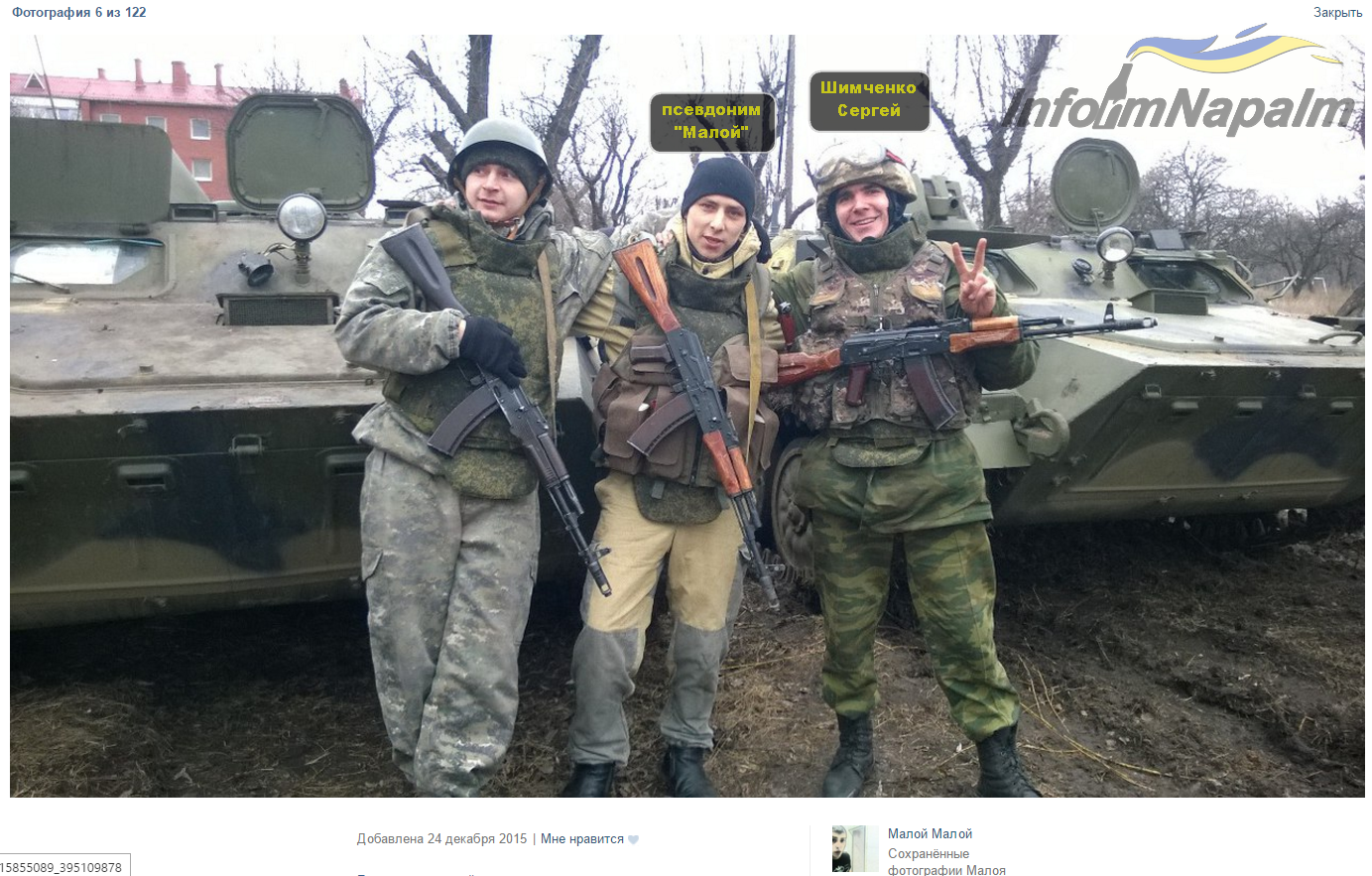 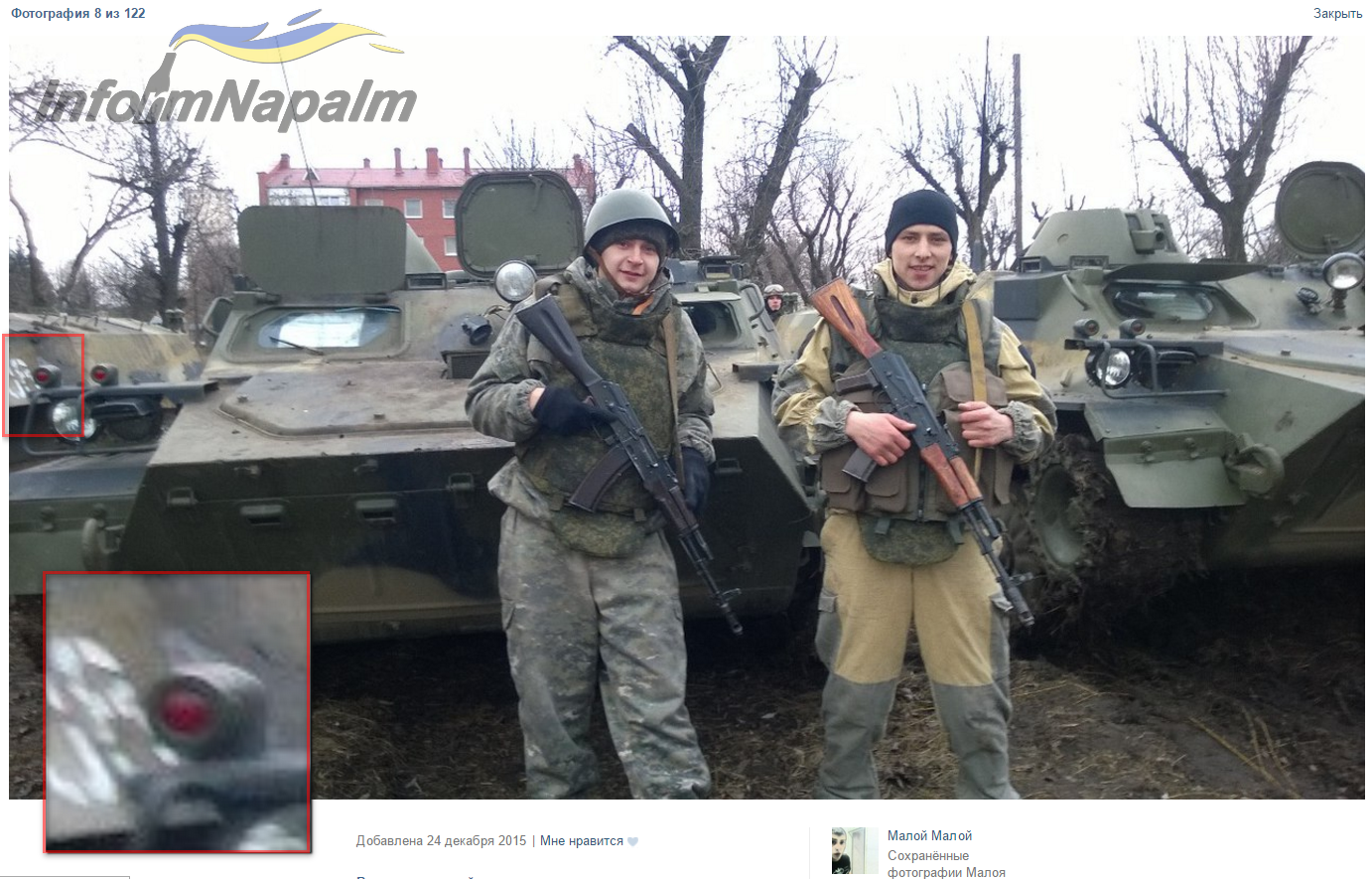 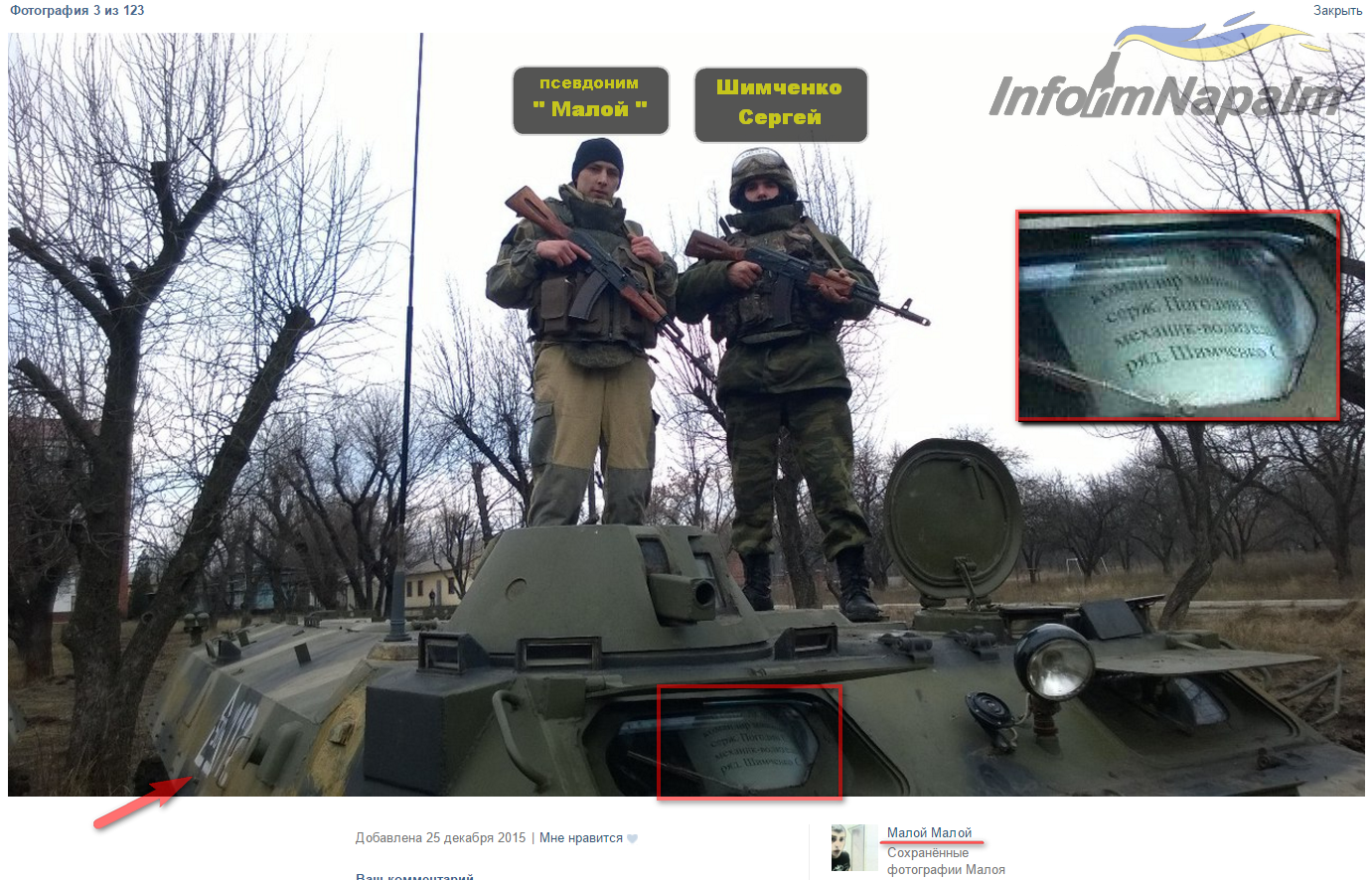 Here a ‘50 in a triangle’ tactical sign is visible and on the previous picture a partial image of the ‘diamond ‘, i.e. military equipment with the original and changed insignia is placed together. The total number of the weaponry has been not changed but ‘the virtual’ number has been increased – the situation, which we have described above.

Below there are the pictures, which also demonstrate how insignia is replaced in Donbas – ‘5 in a diamond’ has been changed into the ‘55 in a triangle’.

This photo is not connected to the current material; we would like to demonstrate the insignia replacement.

Photo of the military equipment on a map. 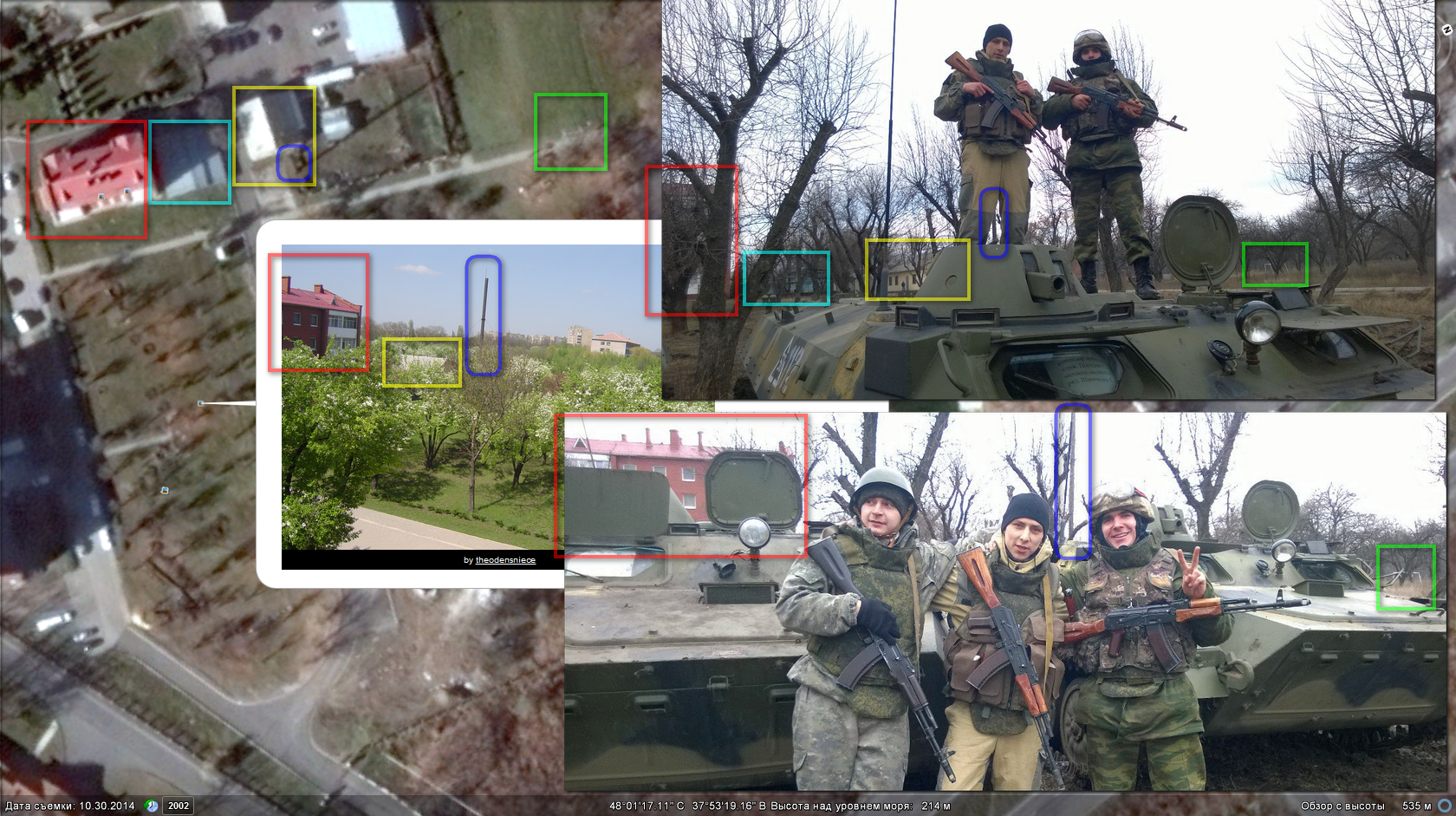 A group photo (1, 2) made in the territory of the Donetsk Christian University. 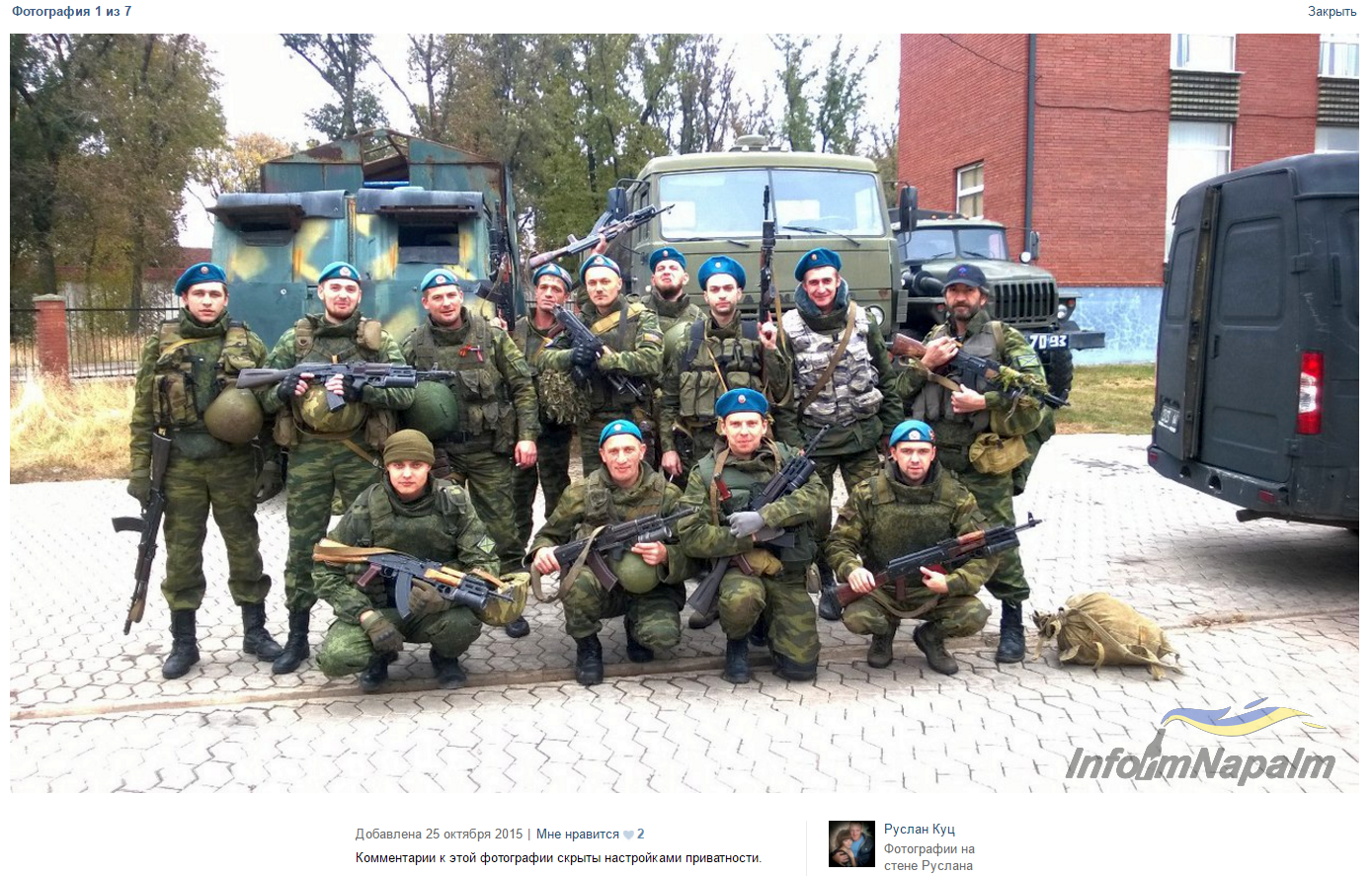 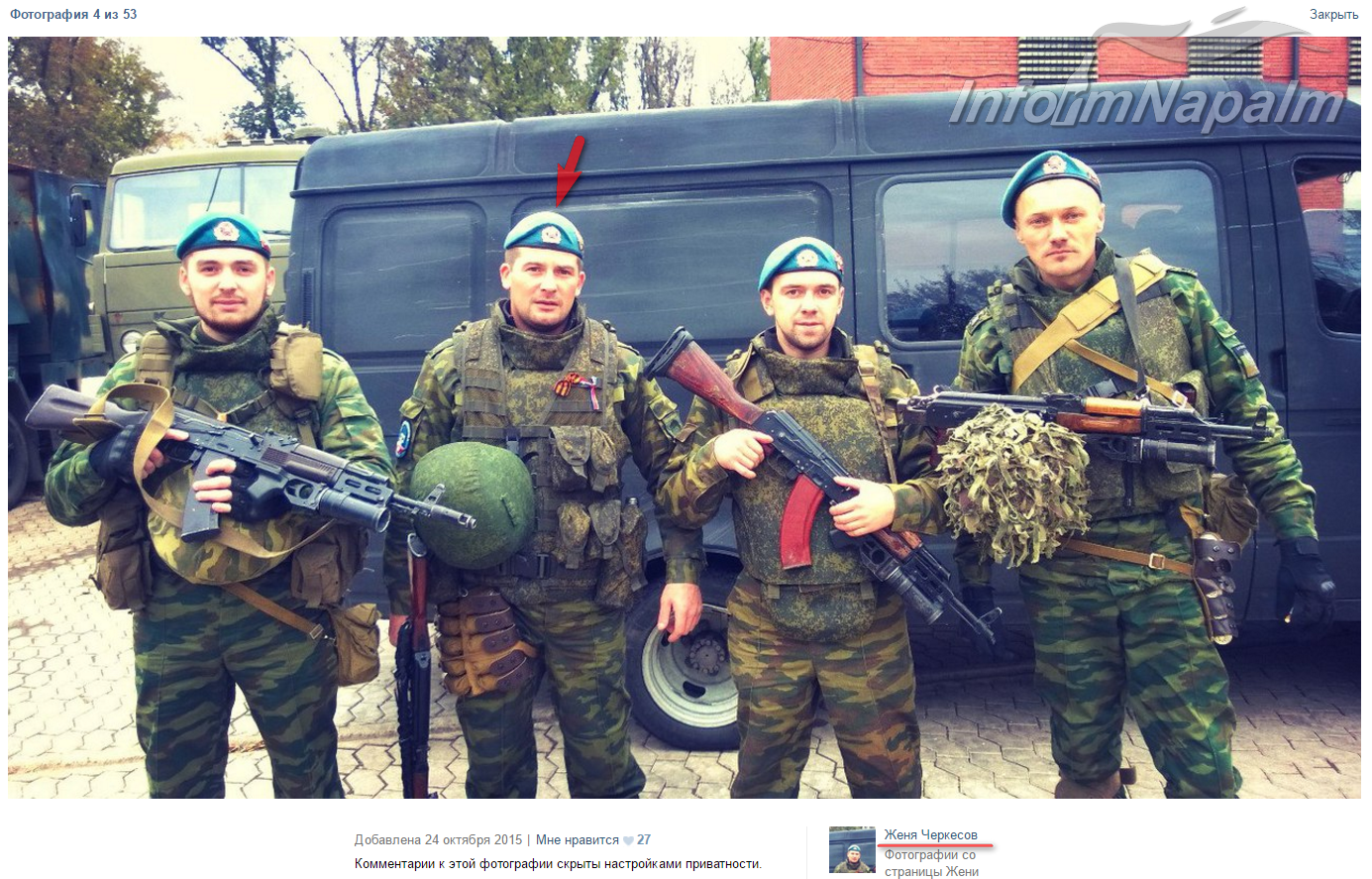 This place is visible just perfectly on the Google Maps. 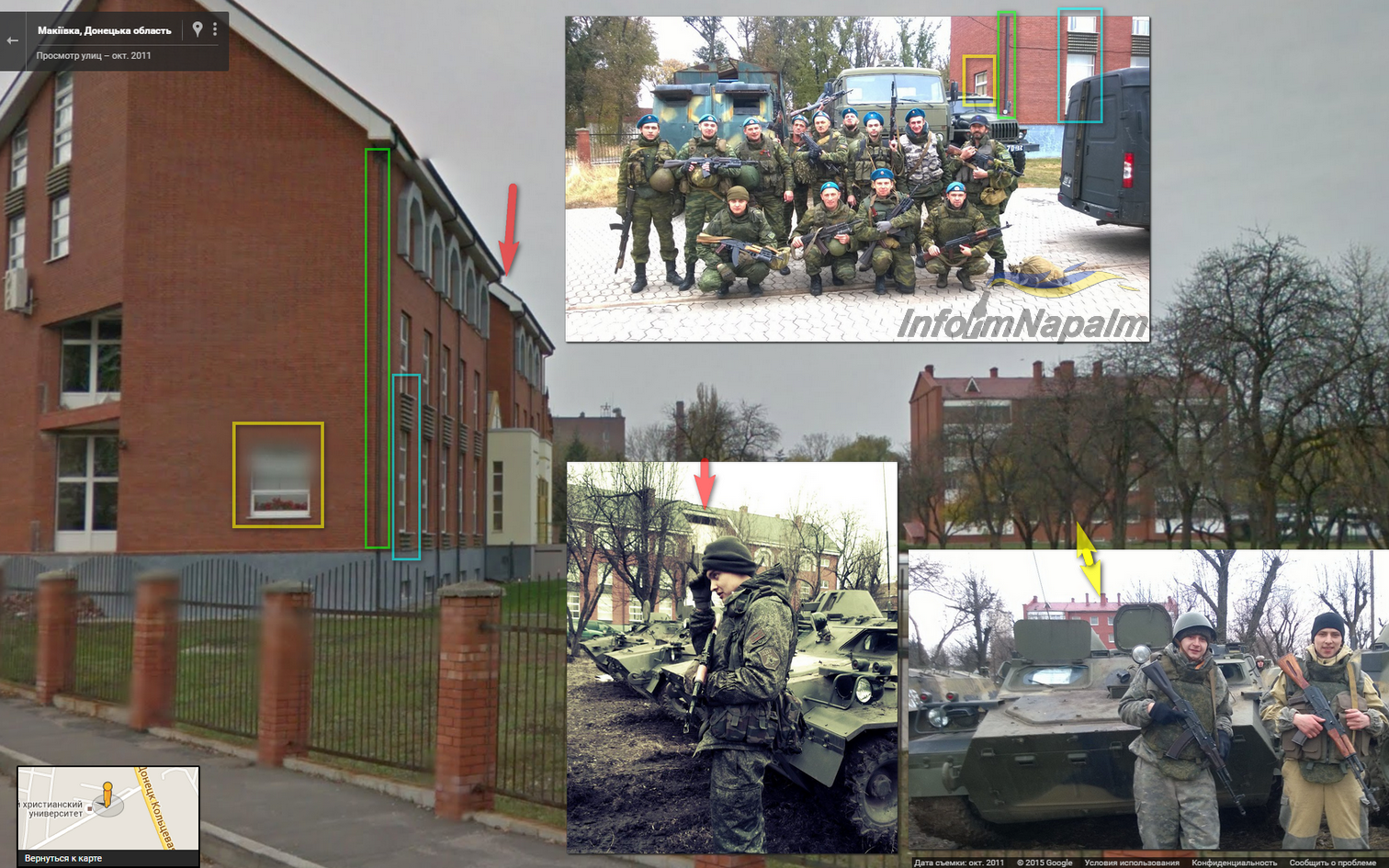 Here are more group photos of this division in Donetsk (1, 2); a video showing the entire division is also available on the Net: “Donetsk: official ceremony of the military colour’s transfer to the elite DPR division”.

Video cameras and firing points along the perimeter are perfectly visible on the below pictures (1, 2). 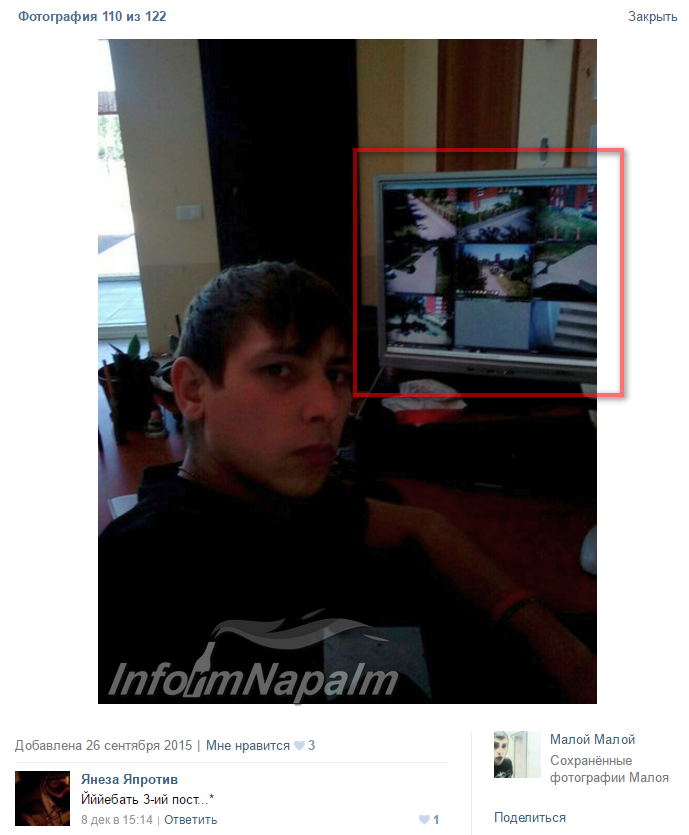 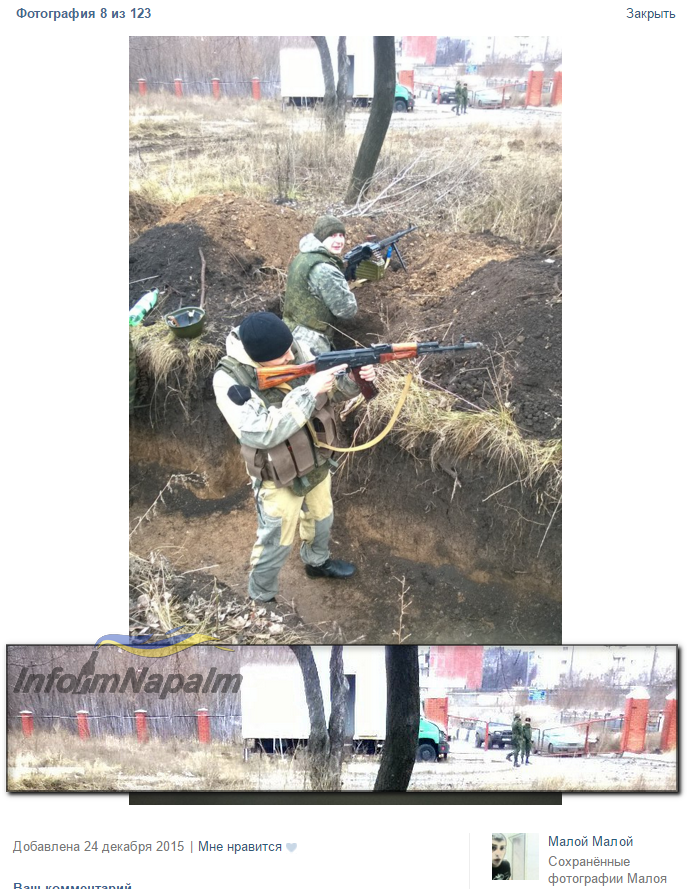 And here are some funny pictures (1, 2, 3, 4, 5) made in the DCU, where the barracks of the Russian-terrorists forces currently are situated. 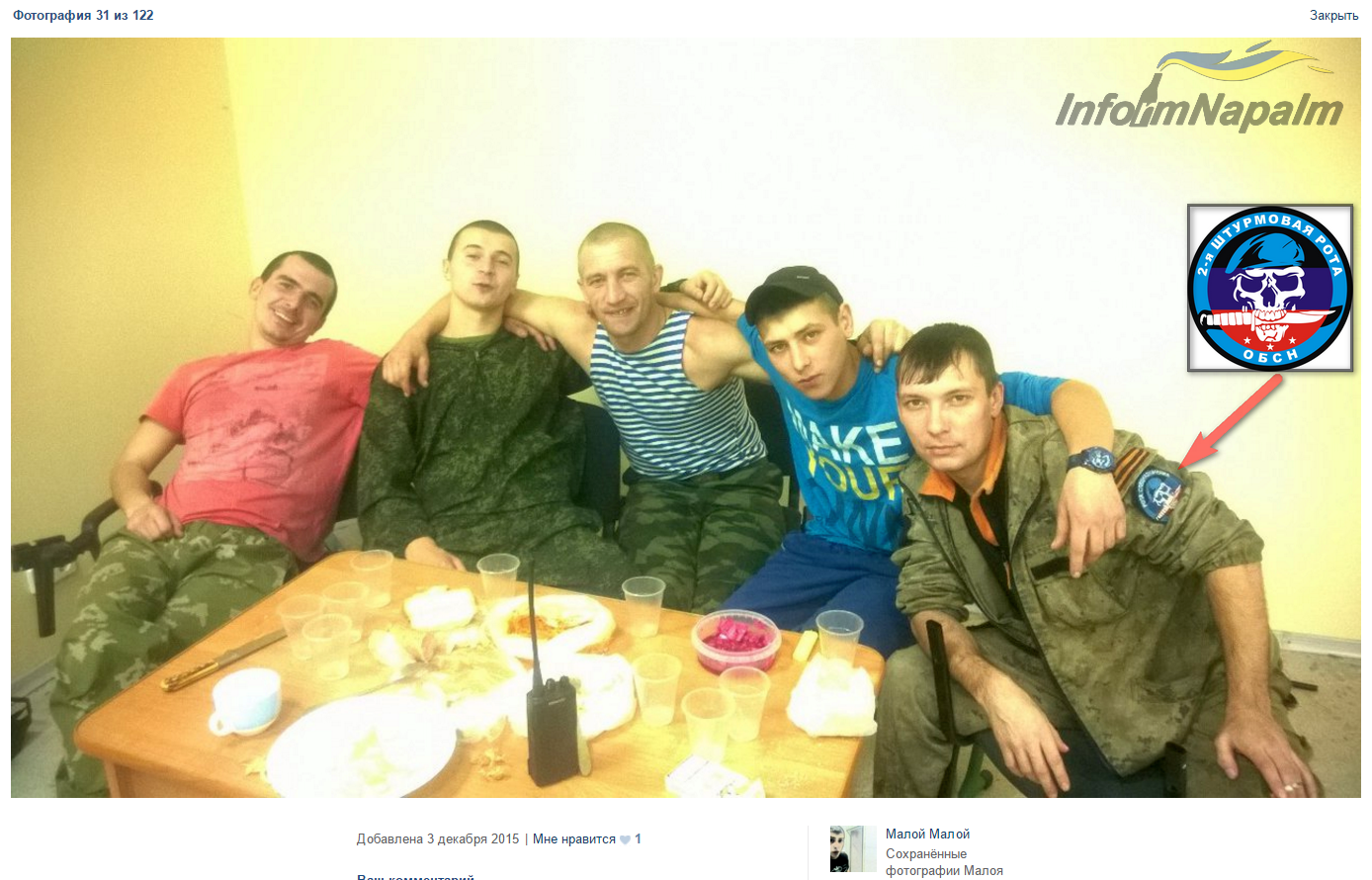 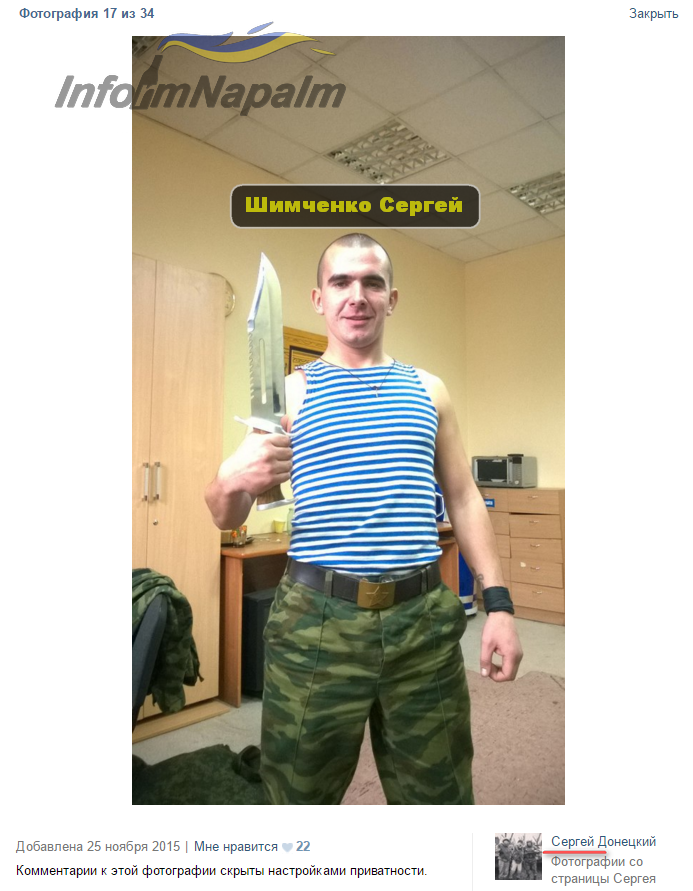 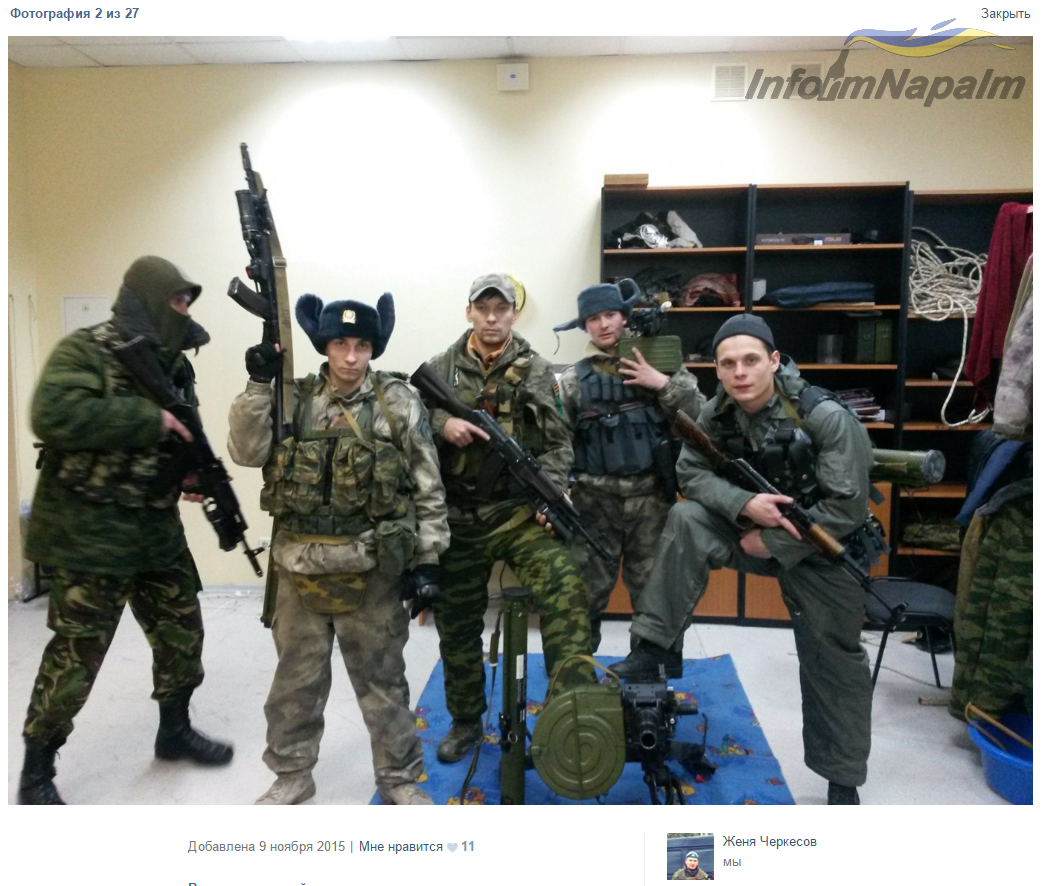 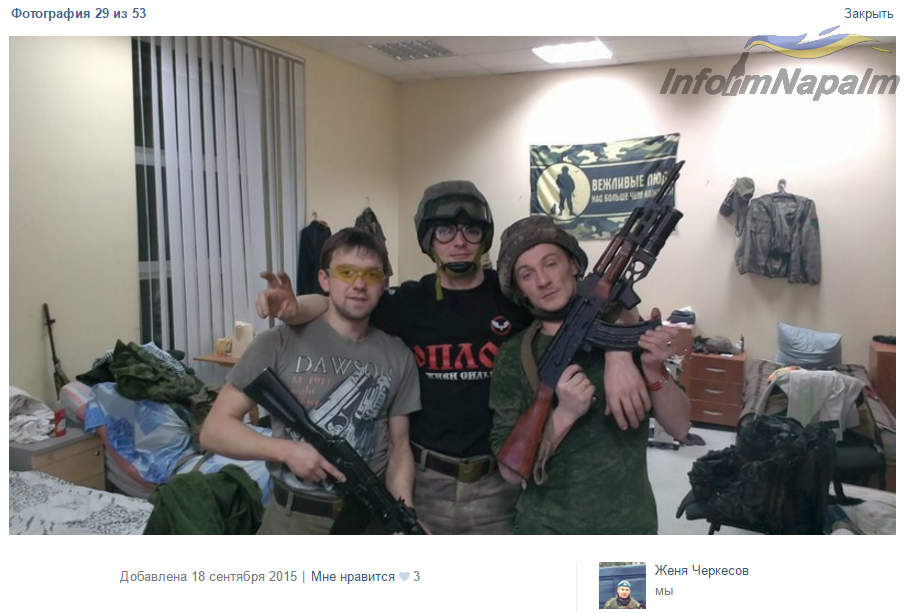 Shaikhutdinov Adel is a mercenary-terrorist, a Russian citizen, lived in Kazan, currently fights in the occupied territory of Donbas killing the Ukrainian citizens.

Archive of the his personal photos: 1 and 2. 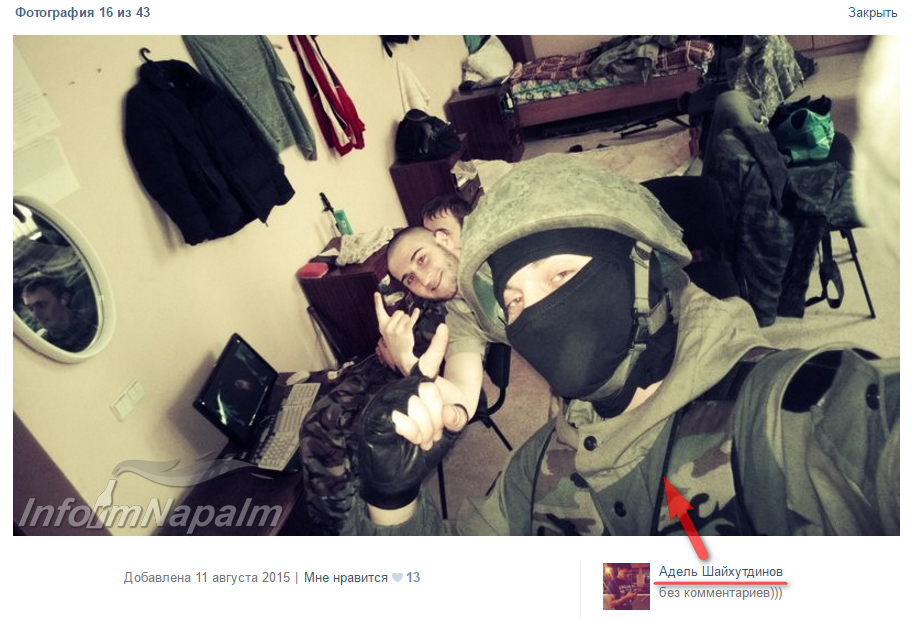 Russian soldier Iskander Garipov (the Russian 22nd special brigade of the Main Intelligence Directorate (‘GRU’)) is listed among the ‘Friends’ of Adel; he has already been identified by our team back in June 2015. He also lived in Kazan. What a nice coincidence!

We would like to pay attention to another Russian soldier of fortune with a nickname ‘Maloy’; he has provided our team with the majority portion of the photo proofs. We hope everything is OK with him and looking forward for new and interesting pictures.

It was his pictures, which allowed us to find heavy weapons being located in the industrial zone 1.5 km from the military base and which terrorists tried to hide from the OSCE mission.

Military equipment (photo: 1, 2, 3) near the plant of the reinforced concrete manufacturing; can you imagine what is hidden inside the plant’s buildings?!

On the tank it is possible to see one of the first tactical signs – ‘polygon with the Roman numeral VII’ – which Russia used to mark the military equipment moved to Donbas; and there is also a tank marked with ‘26 in the diamond’ sign. Further a gas tanker is visible (with sign covered in green color and new sign ‘diamond’) and another gas tanker with a strange number ‘10286ЕВ’.

The picture with the equipment on the map. 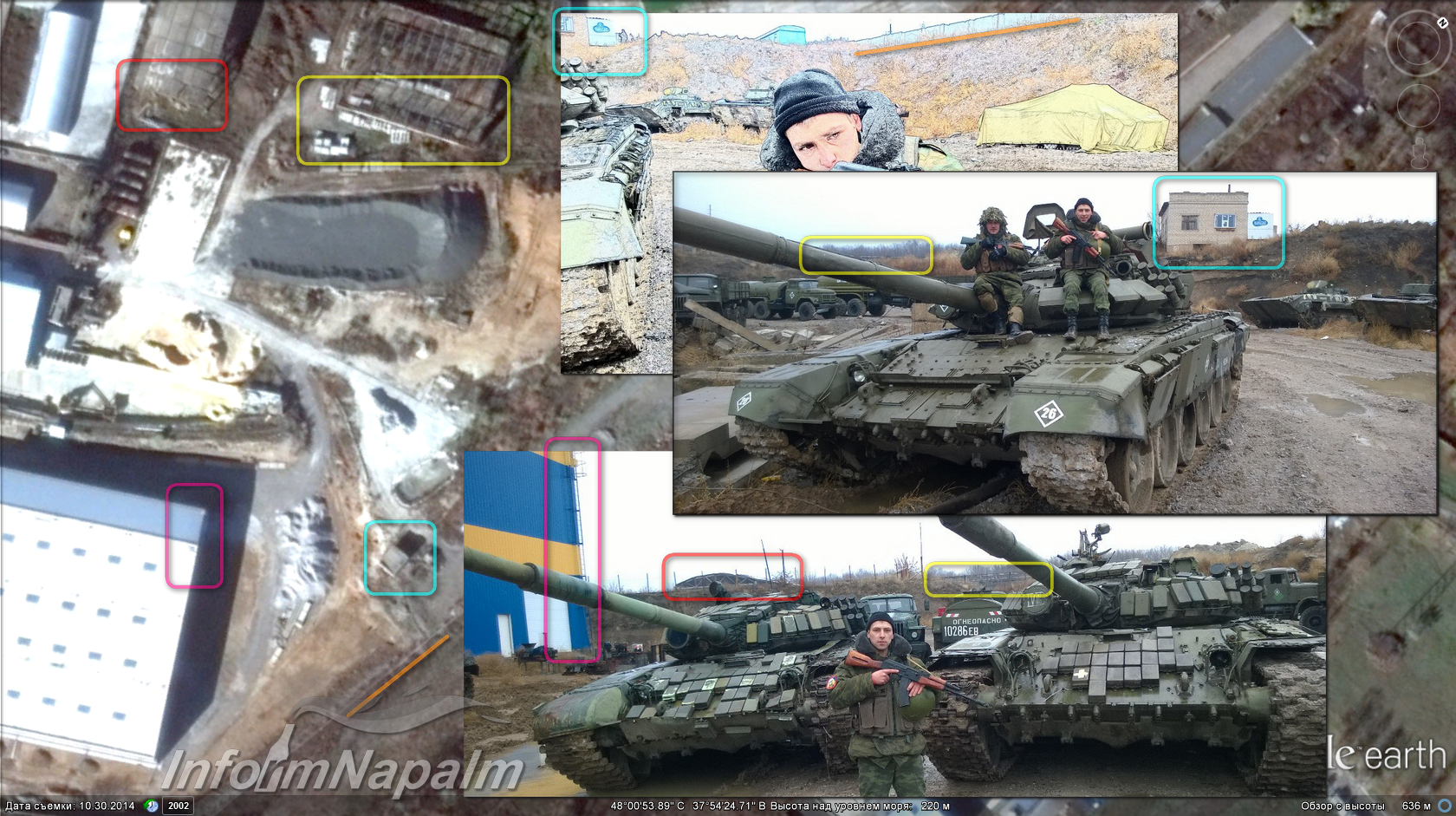 Russian soldier of the 49th machine gun artillery regiment Yury Isaev is listed among the ‘Friends’ of ‘Maloy’. He lives in Kazan. It looks like the Russians from the same cities go to Ukraine in groups wishing to earn war money. You may read more about Isaev here.

One can see names of the crew on the first pictures with the light multi-purpose armoured towing vehicles (MTLB). We were able to read two names and then identify the soldiers. They are Sergei Vasilievich Shimchenko and Sergei Valerievich Pogodin. Our colleagues from the site ‘Myrotvorets’ [Peacemaker] have already published their pictures, so we would not duplicate the efforts.

We are publishing information on another terrorist who called himself ‘Andrei Abdalaziz‘ including his pictures from the Donetsk airport (1, 2, 3). 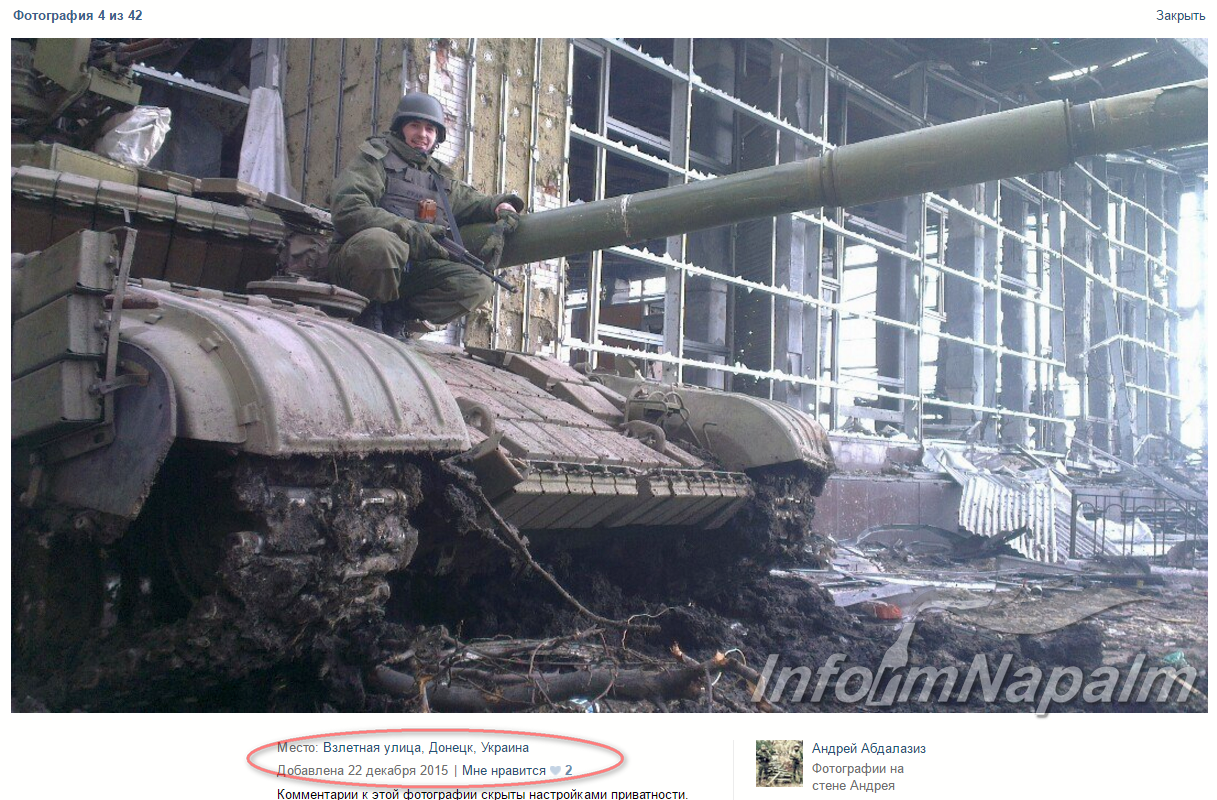 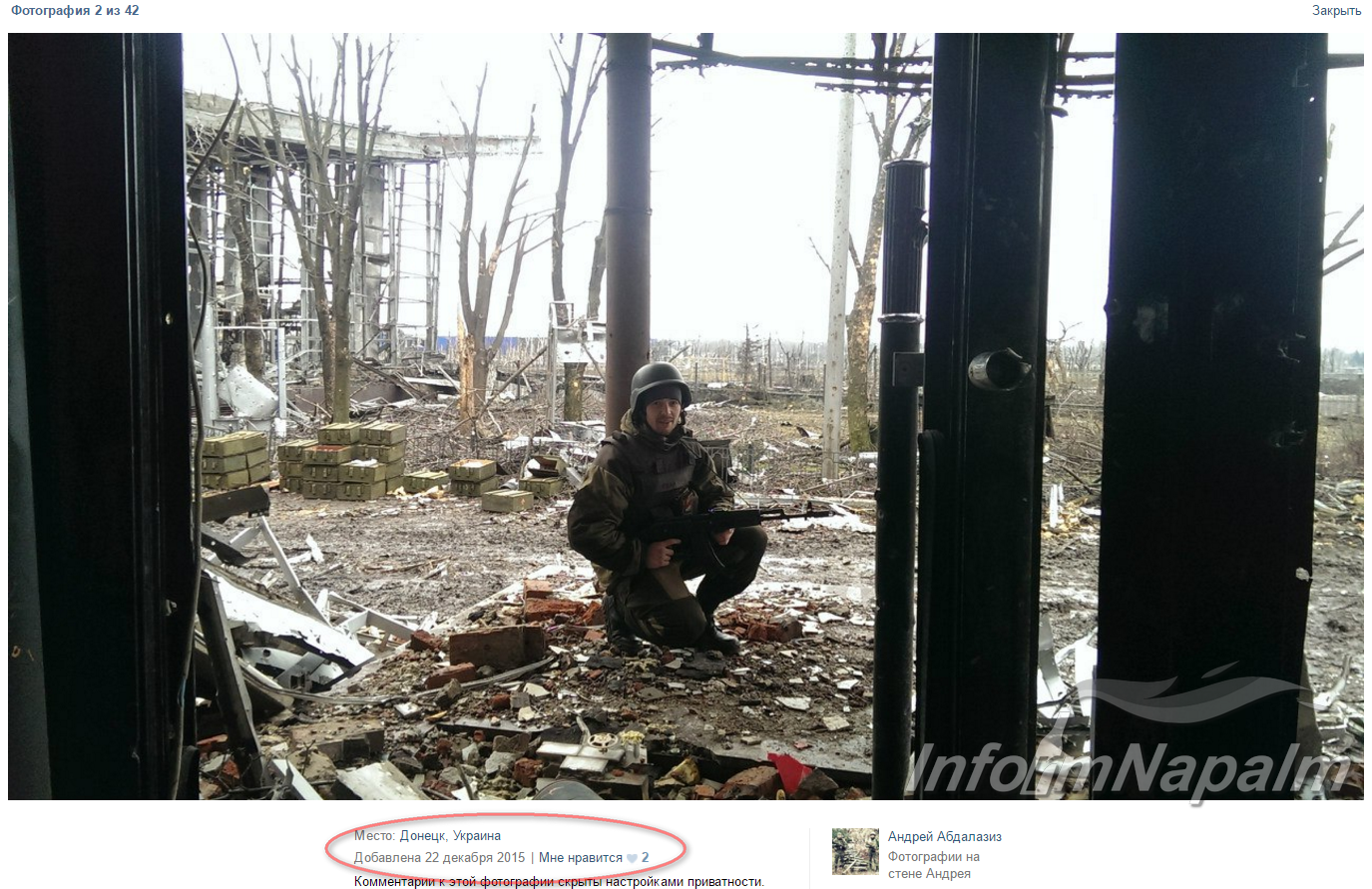 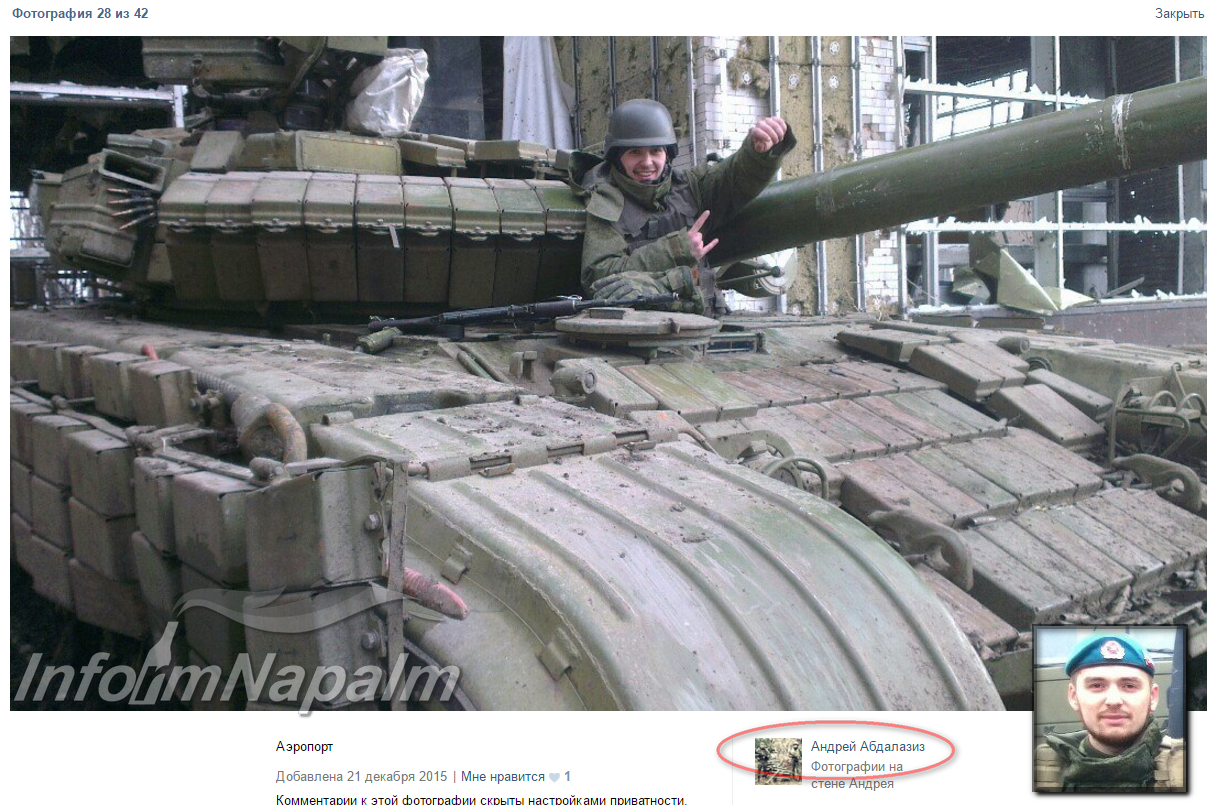 We could publish many pictures and names of this ‘elite’ company but we prefer to make public only those, which can be considered as more informative and interesting ones.