Soldier of the Russian 49th Artillery Regiment Was Seen in Donbas 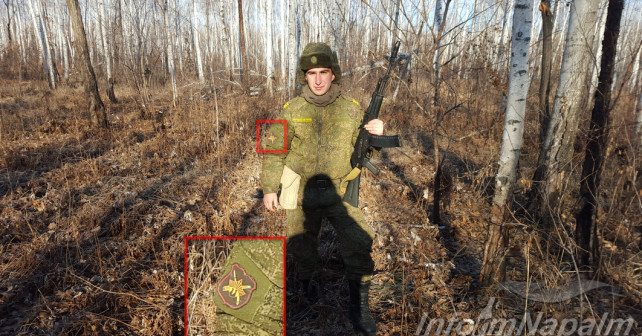 During identification of the concentration areas of the military equipment belonging to the Russian Federation’s occupation forces, InformNapalm international volunteer community discovered several photos that prove that Donetsk Christian University became a Russian military base (more information can be found in the corresponding article).

Analyzing numerous social profiles of the Russian militants and finding the connections between them, we discovered another war criminal – Russian serviceman Yuri Isaev. Due to the huge amount of information in the previous article, we’d like to talk about him in a separate story.

Yuri Isaev. Date of birth: May 30, 1992. Place of birth: Volzhsk, not far from Kazan city (that is why he specified it as the native town). 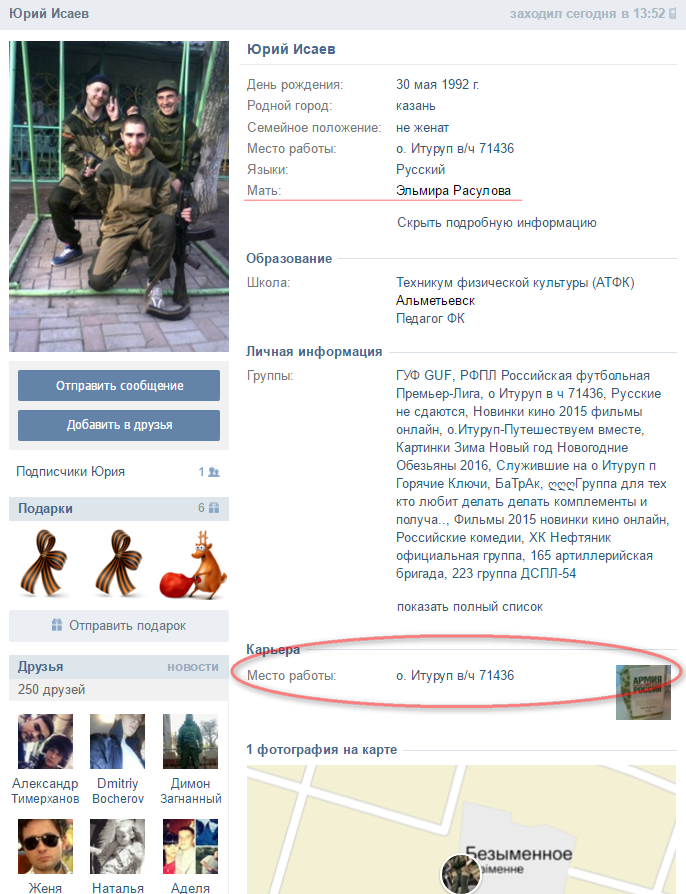 By the way, the information about Yuri’s place of residence and last name (the same as his brother’s one) is confirmed by the data on the mother’s page. Besides that, here is how Isaev comments his own picture: “My heart and soul belongs to ‘CSKA’ [soccer team]! And I support ‘Rubin’ because I live here”. For your reference: ‘Rubin’ is a Russian soccer team from Kazan. 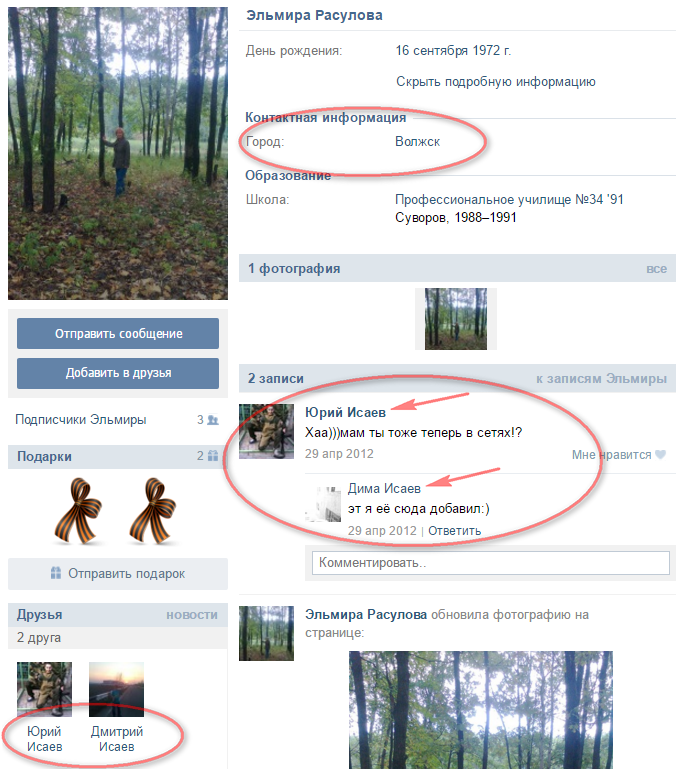 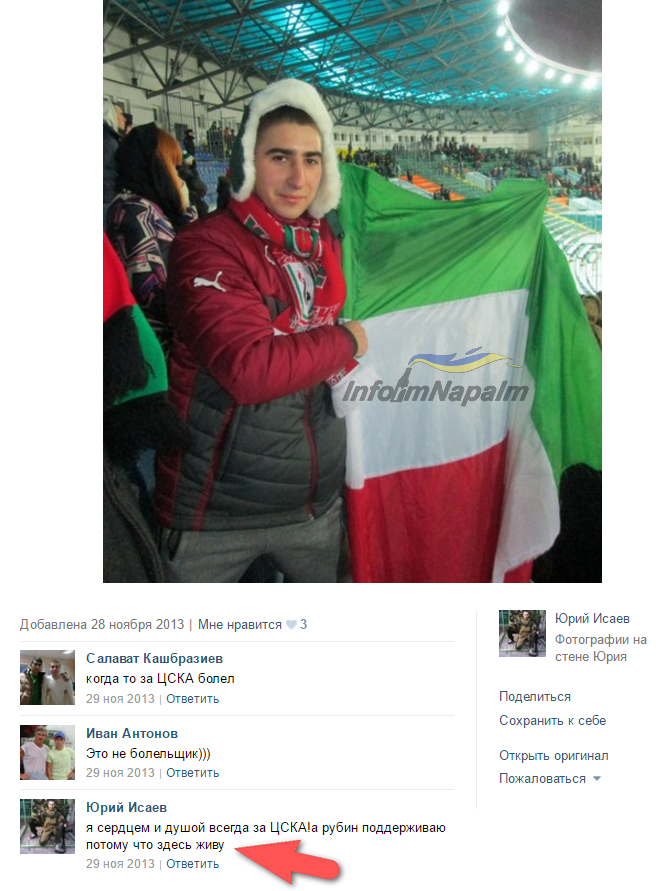 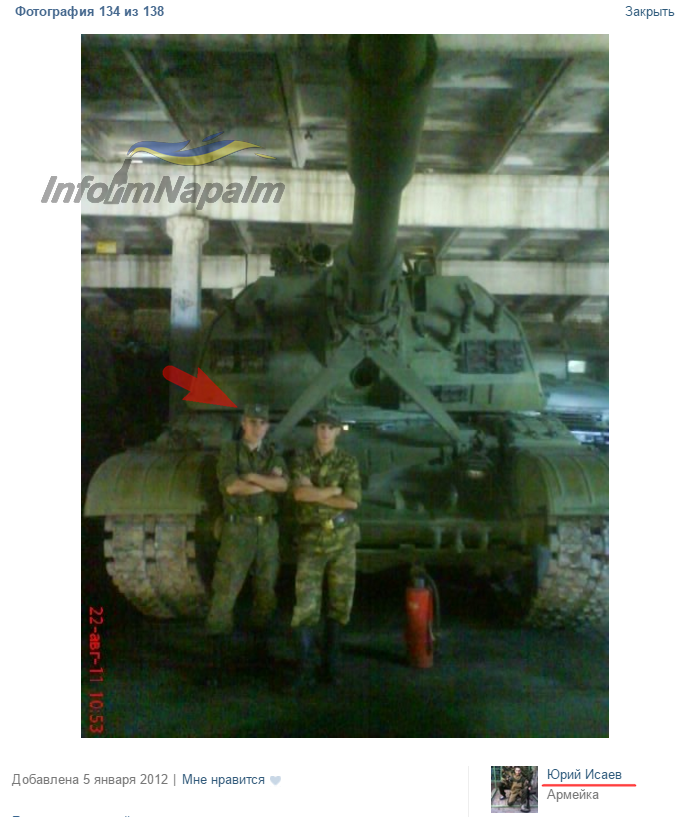 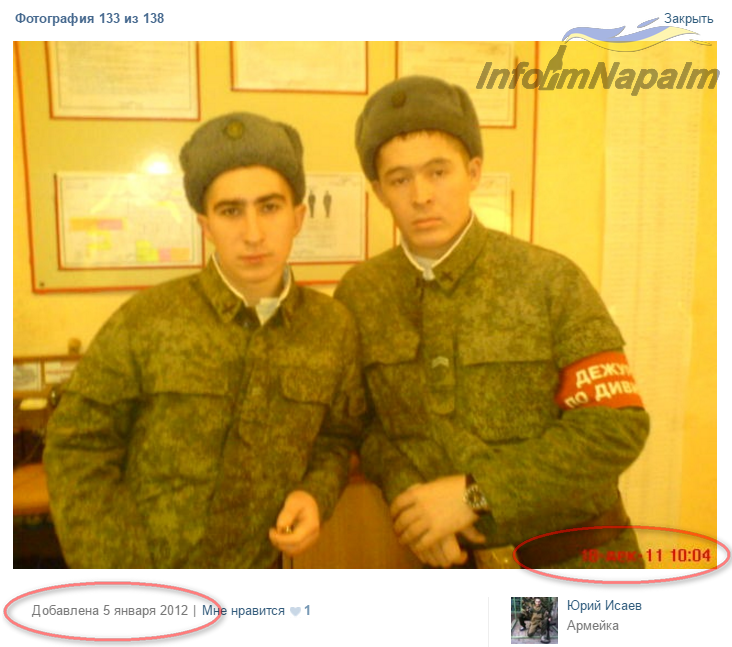 Currently, Yuri Isaev is a contract serviceman of the 49th machine gun-artillery regiment (military unit No. 71436) of the Russian armed forces.

The group photo showing Isaev together with his brothers-in-arms was published on December 6, 2015. The picture was taken somewhere in the fields, in a temporary shelter made of birch stems. The same day a comment ‘You are not beaten there [, aren’t you?]’ was left under the photo – and this proves that the photo is fresh. 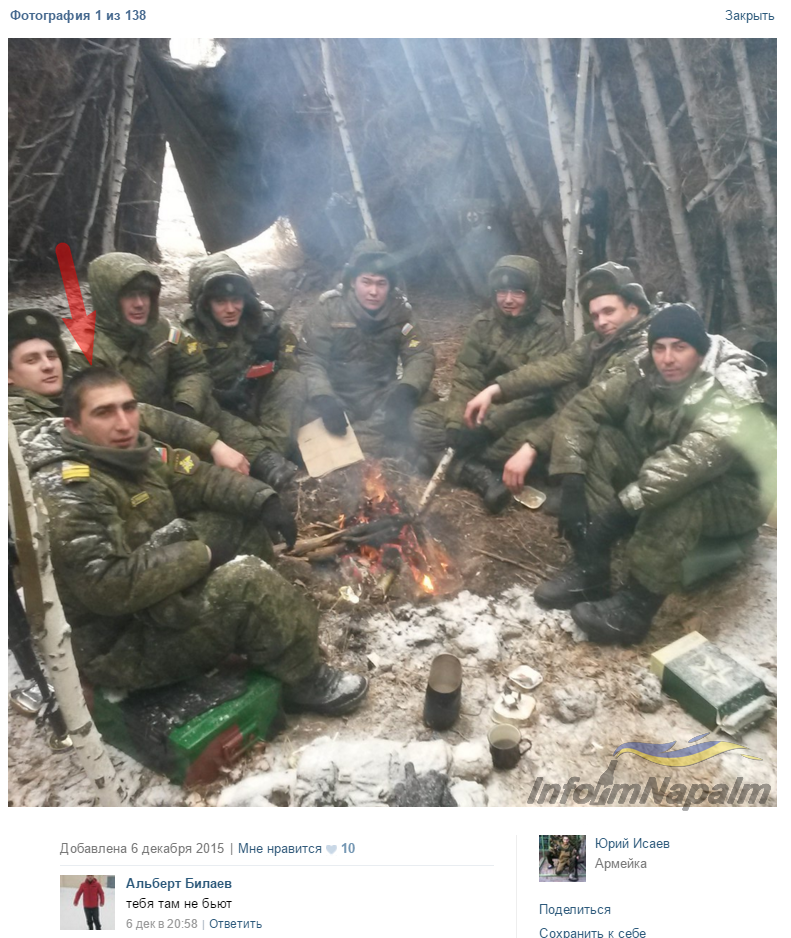 This is another photo of Isaev in the woods (high-res). There is an arm badge of the Russian 49th machine gun-artillery regiment on the serviceman’s uniform. 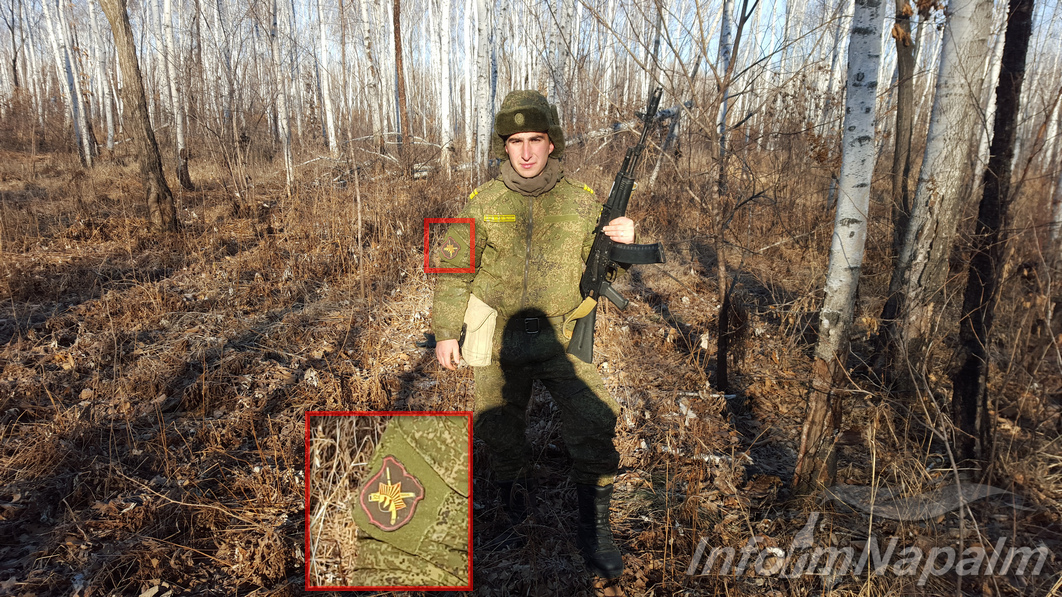 The more detailed investigation of the picture’s EXIF data done with the help of http://regex.info website resulted in finding the exact date of the shooting (November 20, 2015) and the camera model (Samsung SM-G920F).

Samsung SM-G920F is the 6th generation smartphone from Galaxy S product line. It was announced by Samsung Electronics on March 1, 2015, and the sales started on April 15 of the same year. This is another proof that it was not possible to take this photo somewhen earlier. 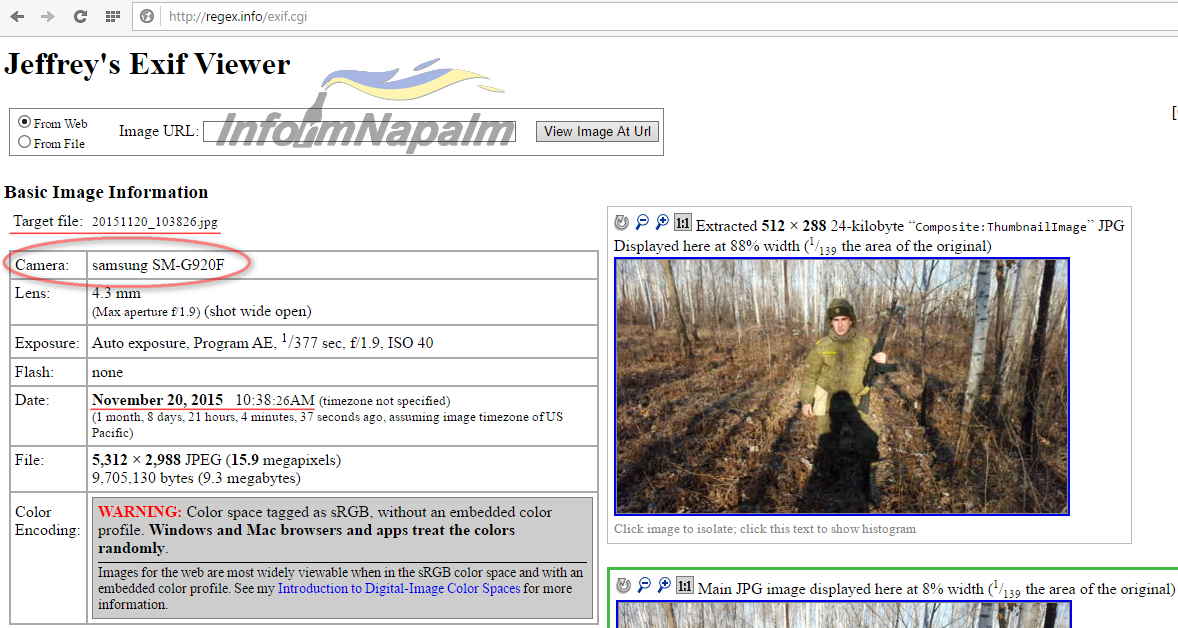 The georeferencing information is missing in the file and we cannot find the exact place where it was made – was it Ukraine, Russia, or somewhere in between. 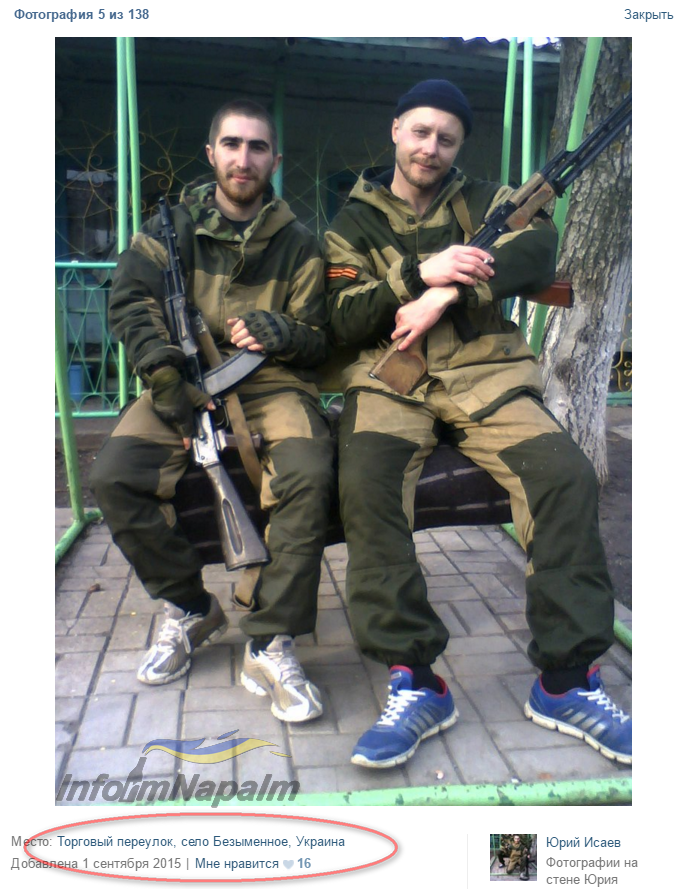 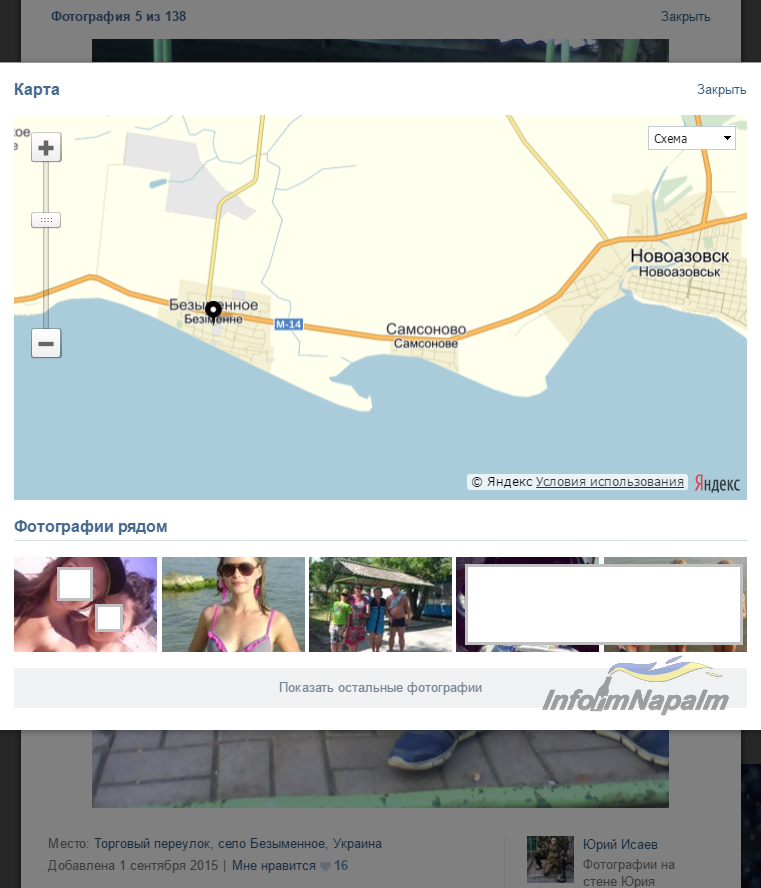 Yuri’s account stores a group photo of him together with another terrorist known as ‘Maloy’ at a checkpoint near Shyrokyne – this person has been already described in “Donetsk Christian University Has Been ‘Transformed’ Into A Russian Military Base” article. 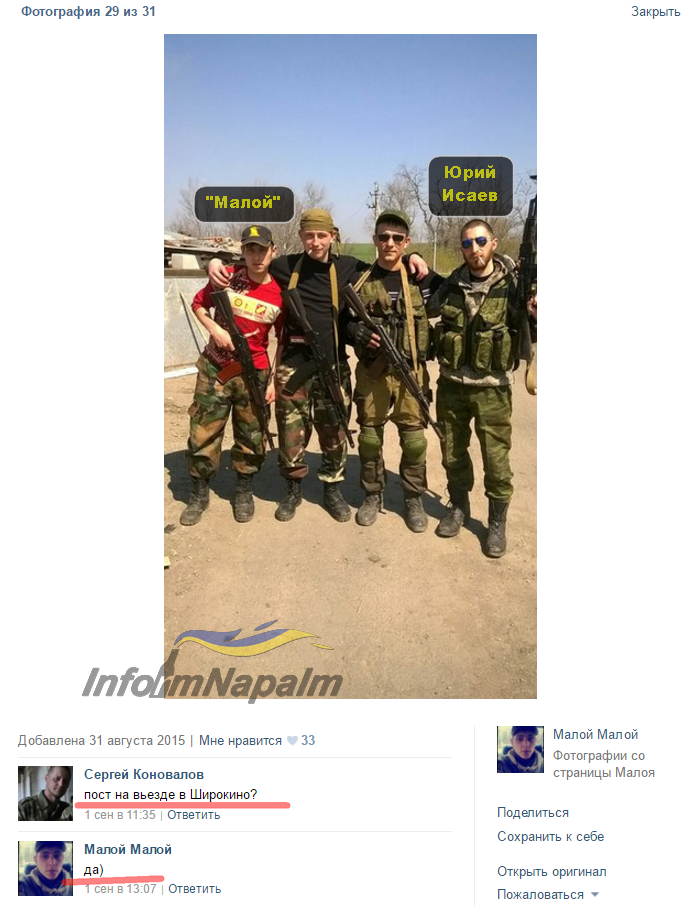 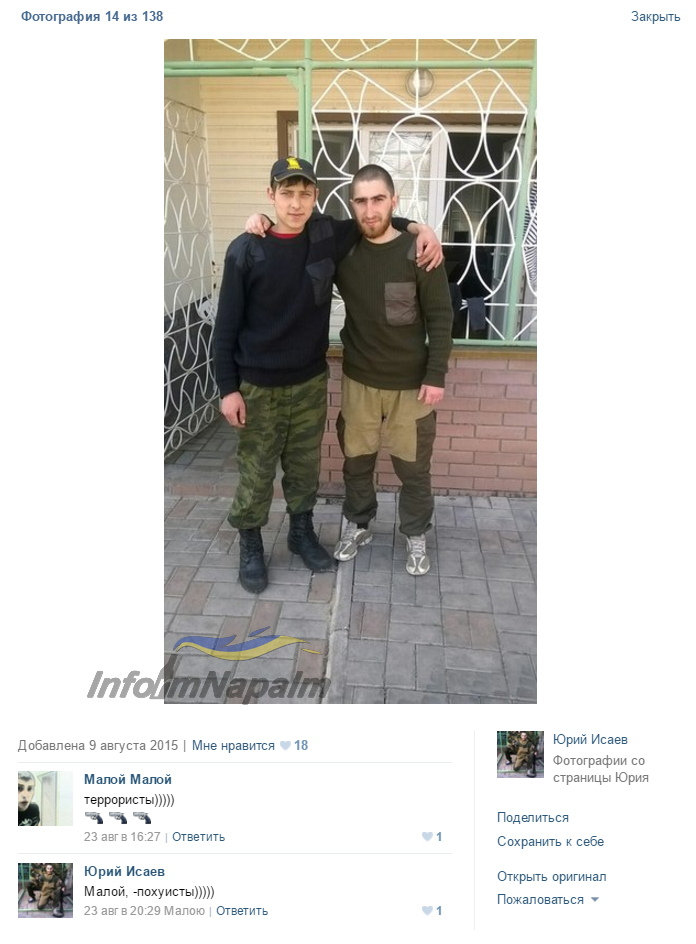 It is interesting that both the local separatists and the Russian mercenaries very often call themselves ‘terrorists’. And the whole world knows how Europe and US treats terrorists. Ukraine is the only country who negotiates with them for 2 years already. The Anti-Terrorist Operation (ATO) can be applied for a Guinness Record as the long-lasting one.