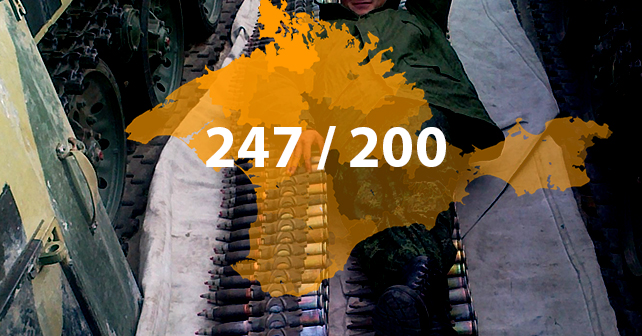 In early August, during massive military maneuvers of the Russian Army in Crimea, an emergency situation occurred – several servicemen committed a serious crime and deserted.

“Five persons are wanted for committing a serious crime in Armyansk. They can either be driving a car or be on foot. All of them are dressed in camouflage bearing an insignia with the flag of the Russian Federation and a rhombus in its bottom part.” –this APB was distributed to every police department in Crimea on August 7, 2016 (archive). 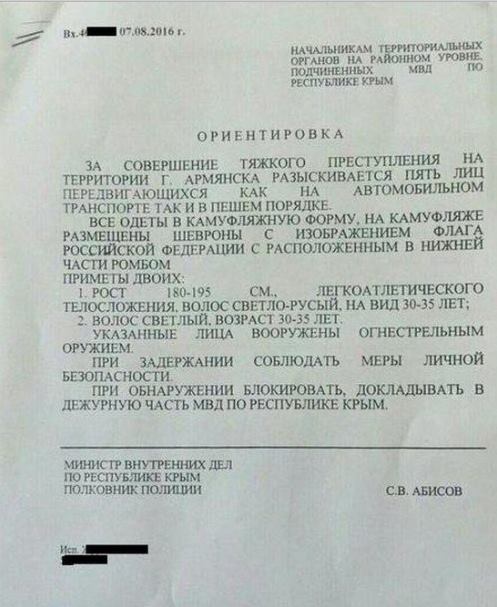 Subordinate to the Ministry of Internal Affairs

for the Republic of Crimea

Five persons are wanted for committing a grave crime in Armyansk. They can either BE drivING a car or be on foot. All of them are dressed in camouflage bearing an insignia with the flag of the Russian Federation and a rhombus in the bottom part.

Description of two of the wanted persons:

The above-mentioned persons are armed.

Personal precautions are to be taken during apprehension.

When identified, the wanted persons are to be blocked, the police call center of the Ministry of Internal Affairs for the Republic of Crimea is to be alerted.

for  the Republic of Crimea

The description in the APB – the insignia, rhombus and the flag of the Russian Federation – resembles the current insignia of the Russian Airborne Forces (archive). 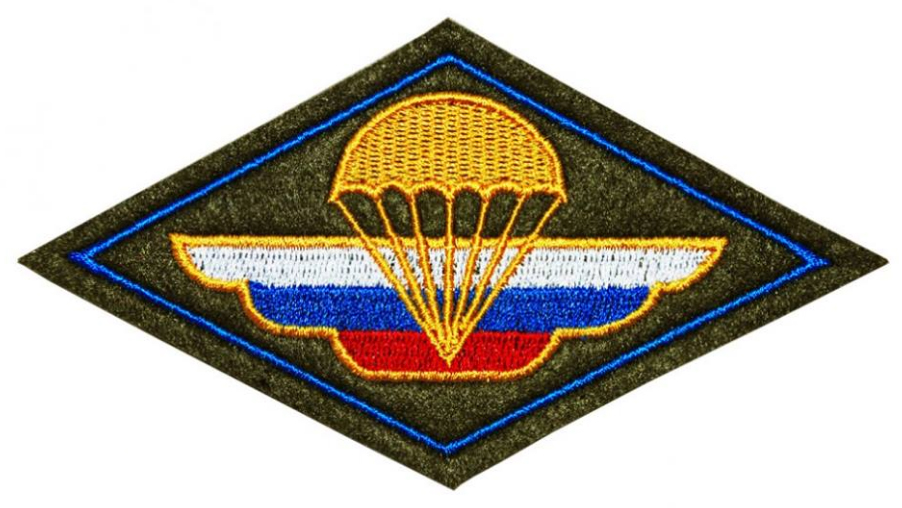 At the same time, the August muscle flexing which Russia was so keen to display in Crimea attracted international attention. Proof of poor discipline in the occupant army where paratroopers leave their stations in groups would be an extremely painful blow to its image, so the information on the deserters is promptly hidden, Internet access was switched off in Northern Crimea (to prevent additional leaks) and Ukraine is being accused  of planning terrorist attacks. The aggressor describing the “saboteur” substitutes the “tall athletic young men” (see the APB by the Ministry of Internal Affairs) with a 140-kilogram citizen of Zaporizhia Oblast who was appointed to the role of “terrorist”, thus covering up an outrageous emergency in the army during the “anti-terror” maneuvers. However, the version intended to kill two birds with one stone, started to come apart as soon as new data began to appear on the Internet. 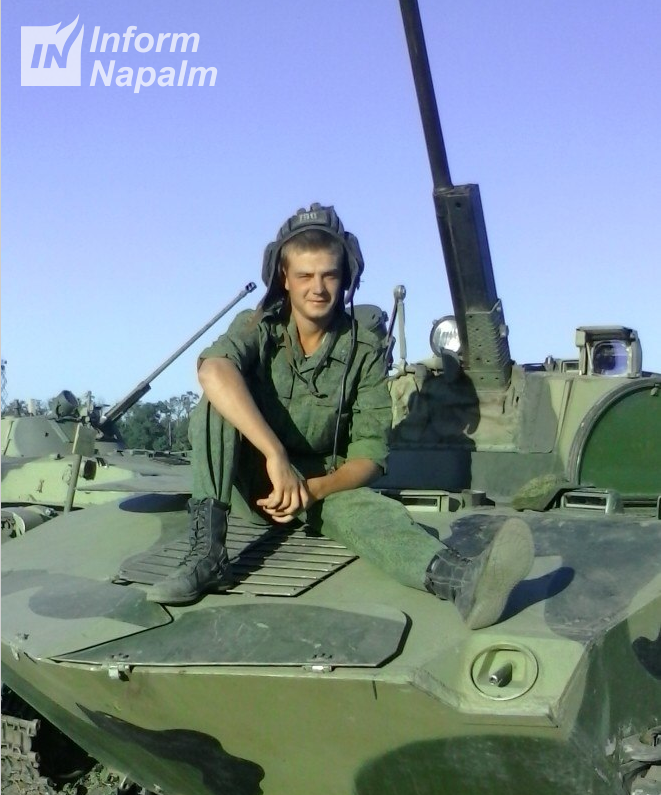 Moscow’s official stance on this matter is strange enough, too. The paratrooper was not awarded posthumously which is indirect proof of the fact that he did not die a “heroic death” from a bullet of a “Ukrainian special forces unit” but was injured in an internal conflict. In view of the fact that the Russian military authorities are quick to award even Russian servicemen secretly acting in Syria and on the Donbas for distinguished service, Sychev could very likely be one of the deserters wounded during apprehension.

The situation with the killed member of Special Forces of the Russian Security Service is equally strange. Allegedly, his name is Roman Kamenev. An official statement by Russian authorities, as well as his award as a “defender of the Fatherland”, is yet to come, despite huge public reaction to this event stirred up by the media.

Obviously, this case of desertion and death of two servicemen involves criminal negligence by Russian military command at different levels. Solidarity, allowing the cover up of crimes can be tracked from direct commanders and officers of the 247th Air Assault Regiment of Airborne Forces to top brass who decided to turn an “anti-terror maneuvers” emergency into an event which could trigger a full-scale war.

An independent journalist investigation and search for insiders in the 247th Air Assault Regiment of Airborne Forces could shed some light on the strange deaths of the servicemen.

We would like to remind you that the participation of the 247th Air Assault Regiment of Airborne Forces in the Donbas war has been exposed by InformNapalm investigations on more than one occasion.

Prepared by Mikhail Kuznetsov and Roman Burko specially for informNapalm.org

(CC BY 4.0) This information has been specially prepared forInformNapalm.org, an active link to the authors and our project is obligatory for any reprint or further public use of the material.