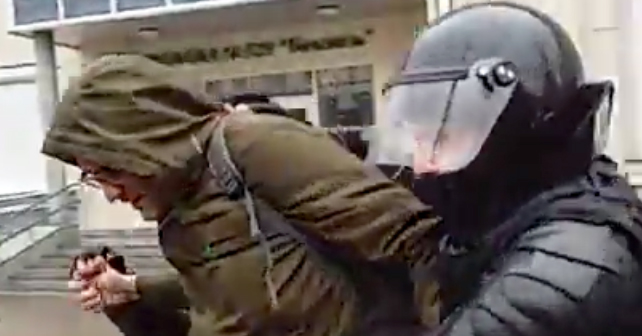 According to the Belarusian Journalists Association, trials of journalists detained during the Freedom Day will take place today, on March 27, in Minsk, Vitsebsk and Polatsk. The Association published lists of correspondents and journalists whose administrative trials had been scheduled.

The trial of Dzianis Ivashin, editor of the Belarusian version of InformNapalm, was supposed to take place in the Frunzenski District Court (1/2 Vulitsa Dunina-Martsynkevicha) today. The journalist was detained during the crackdown on Freedom Day protests in Minsk. Mr. Ivashin has been accused of having violated Article 23.34 “Violating Procedure of Organizing or Holding Mass Events” of the Administrative Violations Code; he is held in custody in Akrestsina Detainment Center.

However, Dzianis Ivashin was not transported to Frunzenski District Court this morning. The attorney and lawyers of the Belarusian Journalists Association are still in the search for Dzianis Ivashin!

A man looking like Dzianis Ivashin can be seen pushed  into the police van in this March 25 video starting from 03:36; he is seen making several attempts to explain to OMON riot police that he is a journalist but the police officers ignore his words and keep using force.

UPD: Dzianis Ivashin has been found in court. He gave a short video interview about his detention and signs of falsifying of the documents in a cooked criminal case against him.

UPD2: Dzianis has been sentenced to 5 days in jail, despite the fact that he was performing his professional duty as a journalist. There were other journalists who received longer arrest terms, as reported by Maryia Sadouskaya-Komlach

We call on human rights activists and the international community that they urge authorities to release the journalist from custody and refrain from the political persecution in connection with his professional activity.