History of Ukraine: The rise of nationalism in 19th century. 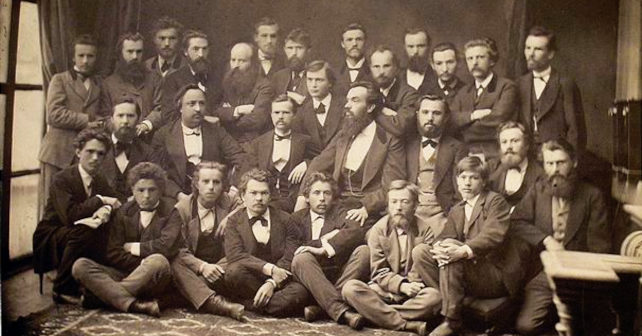 Some trivia about Ukraine on the 29th anniversary of country’s Independence by George V.Pinchuk. The rise of nationalism in 19th century or two Ukrainian nationalisms. Part 5.

The second half of the 19th century in the “Russian” part of Ukraine was marked by a vicious attack on the Ukrainian language by the Russian imperial government. In 1863, after a failed revolt in Poland, the Minister of Education of the Russian Empire count Valuev issued a decree that made the use of the Ukrainian language illegal. The decree denied the Ukrainian language even the status of a dialect. It said, “There is no way a separate Small Russian dialect can even exist.” The language of Kotlyarevsky and Shevchenko was humiliated all the way to being defined as a “spoiled,” illiterate, substandard Russian. The Valuev decree criminalized printing of any literature in this “spoiled” language, as well as all theatrical performances in it. (Later, an exception was made for one-act folk comedies, which were declared legal if preceded by “serious” drama in Russian.) In 1876, Tzar Alexander II (the most liberal of all Russian monarchs, the one who abolished serfdom in 1861 and started a radical judicial reform in the 1870s!) signed what became known as the Ems Ukaz, making the Valuev decree the law of the Russian Empire. In addition, the Ems document forced two popular Ukrainian public figures (M. Drahomanov and P. Chubynsky) to emigrate to Western Europe.

These draconian measures, of course, were met with tough resistance. First, the Ukrainian patriots established friendship with writers, artists, and civic activists of the Ukrainian origin in the Austrian Empire, where publishing in Ukrainian was legal. Over there, in the Hapsburg-ruled conglomerate of nations, some Ukrainians reached high positions, becoming members of the Austrian Parliament. Ivan Franko, himself a genial poet and prosaic, one of the most colorful figures in the Ukrainian literature – a son of a poor peasant in the Carpathian Mountains – became one of the MPs. Together with his friend M. Pavlyk, Franko helped Ukraine to become a nation with a degree of self-awareness by coordinating the publication of tons of literature in Ukrainian, and the transportation of this literature between the “Russian” and the “Austrian” parts of the country. So, the “Austrian” Ukrainians became aware of the works of Shevchenko, Lesya Ukrayinka, Panas Myrnyy, and others; and the “Russian” Ukrainians became able to read Franko, V. Stefanyk, M. Shashkevych and other writers of the Western parts of Ukraine. The Ukrainian theater continued to develop, too, in spite of all the persecution, with its playwrights like M. Starytsky and actors like M. Sadovsky, P. Saksahansky, I. Karpenko-Karyy and Maria Zankovetska. The Ukrainian music acquired its classics, Mykola Lysenko and (later) Levko Revutsky (my distant relative).

In the late 1800s, the broad and complex movement known as the Ukrainian Nationalism was formed. Perhaps its roots can be traced to the literary magazine “Osnova” (The Foundation), which, in the 1840s and 50s, published works of the previously mentioned members of the Stt. Cyril and Methodius Brotherhood M. Kostomarov, P. Kulish, and T. Shevchenko. In 1859, a historian V. Antonovych founded in Kyiv a society known as “Hromada” (The Community”). The society included a famous writer and playwright M. Starytsky, a prominent historian M. Drahomanov, a scientist (biologist) V. Kovalevsky (the husband of the renowned mathematician Sofia Kovalevska), a popular writer I. Nechuy-Levytsky, a young poet P. Chubynsky (the author of the current National Anthem of Ukraine), and others. While the Hromada’s founder Antonovych saw the task of the organization primarily as bridging of the gap between intellectuals and the peasantry, others – notably, Drahomanov – viewed it as a tool for awakening the self-awareness of all social strata of Ukrainians as Ukrainians, members of the one particular nation regardless of their social status, education, profession, and even citizenship. After the Ems law, of course, the Hromada was declared a criminal, separatist, subversive organization, but it continued to work either in the underground, or in emigration. It educated and inspired many thousands of followers, among them the future leaders of the first Ukrainian independent non-Communist state, the Ukrainian People’s Republic (M. Hrushevsky, V. Vynnychenko, S. Petlyura).

While Hromada represented a more or less “left wing” or “democratic” Nationalism, a different, right-wing trend in the Nationalist movement developed. Its leader was Dmytro Dontsov, a prolific writer-historian and a philosopher. Originally from Eastern Ukraine (Tavriya), Dontsov became a Social Democrat and, after two arrests and imprisonments by the Tzarist government, emigrated to Austria in 1908. There, paradoxically, he severed all ties with Social Democrats with their “Internationalism,” graduated with a doctoral degree in law from the Vienna University and began to develop his own teaching, which today’s critics qualify as a kind of “Integral Nationalism.” Essentially, Dontsov taught that a true Nationalist is NOT an intellectual, because he or she is directed by instincts of “blood” rather than by any social theory. The true Nationalist’s ONLY goal in life is the prosperity of his or her nation. Ukrainians should recognize each other instinctively and be absolutely loyal to each other because of their “blood relation.” There should be no classes, no particular political views, no affiliation to any group other than one’s ethnic “brotherhood.” Any form of cooperation with people of other ethnicities is, in Dontsov’s opinion, absurd because different ethnicities fight each other for survival and prosperity. “Humanism” is an illusion, a self-deluding road to nowhere.

Of course, by today’s standards, Dontsov’s version of Nationalism might seem crude, somewhat Nietzschean, and even resembling the teachings of the Italian Fascism and of the German Nazism. However, Dontsov did not divide nations into “superior” and “inferior” – his only point was that for A PERSON, there exists his or her nation as the only real object of his or her care, and “other” nations that are competitors to be treated as such. In this regard, he certainly was not a Nazi. Also, in the 1910s-1920s, the followers of Dontsov did a remarkable job of consolidating Ukrainians both in the east and in the west of what is now Ukraine, and in other countries (Poland, Czechoslovakia, Romania, Hungary, Germany). General V. Zelinsky in Germany and Longin Tsehelsky in Austria (both “integral Nationalists”) helped organize the first modern Ukrainian army based on battalions of ethnic Ukrainian soldiers captured during the WW1. Mykola Mikhnovsky, a radical right-wing politician, the founder of the anti-Socialist “Union of Land-Owning Grain Growers” (“Союз хліборобів-землевласників”) helped Hetman Pavlo Skoropadsky to seize power and to implement many wonderful reforms in 1918.

In the last years of his life (he died in Canada in 1973), Dontsov somewhat evolved toward Christian traditionalism and asceticism. Yet, he remained deeply devoted to Ukraine, and sincerely believed that one day, his native land will be independent and free of ideological oppression. Although I, personally, am more of a “Humanist” and “to the left” from Dontsov, I do very, very much appreciate his keen sense of “us versus them,” “ours vs. theirs” – the sense that when attacked by a clear-cut enemy who wants to destroy them, Ukrainians should unite regardless of their particular points of view on the political “issues.” Today, when Ukraine is at war with Russia, I think Dontsov’s heritage is very relevant. Also, regardless of my personal take on issues, I regret that there are no right-wing political parties in today’s Ukraine. Not belonging to the right wing, I still believe that the truth can only be found in free discussions between people of differing ideological positions.

3.History of Ukraine: The Russian Captivity

No Responses to “History of Ukraine: The rise of nationalism in 19th century.”