Identification of persons involved in extra judicial killing near Debaltseve. 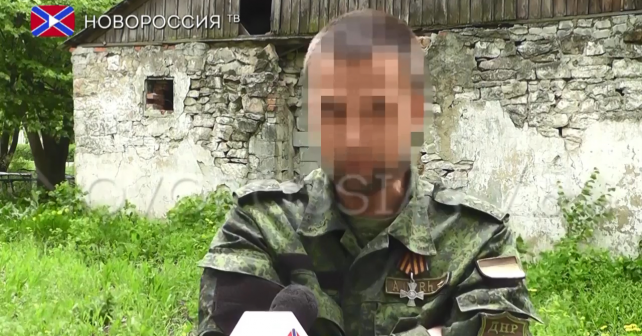 On February 9, 2015 two trucks of 30th Guards Mechanized Infantry Brigade (30th GMIB) got under fire in an ambush close to Lohvynove, a village in the upper part of Debaltseve salient, on the highway between Debaltseve and Bakhmut (formerly Artemivsk) in Donetsk Oblast of Ukraine. Five servicemen were going to Slovyansk for ammunition and ran into an ambush of the militants on the road.

Later, a video appeared on the web of militants manhandling three Ukrainian servicemen. Relatives identified Oleksandr Berdes on this video. Together with him, other 30th GMIB servicemen, Vasyl Demchuk and Pavlo Platsynskyy, were captured.

As it became known later, on February 9, 2015 Russian militants executed the wounded POW’s  Oleksandr Berdes, Vasyl Demchuk and Pavlo Platsynskyy. Their bodies were buried in a shallow grave in the forest belt close to Lohvynove. Later, the bodies were found by volunteers of the Patriot volunteer group

On February 11, 2015 Roman Aleksandrovich Nazarov  posted on his social page a video that shows him and other Russian militants manhandling three Ukrainian servicemen.

Screenshot of the social network page. The title of the video shows that it was filmed on February 9, 2015 at 9:39 a.m. 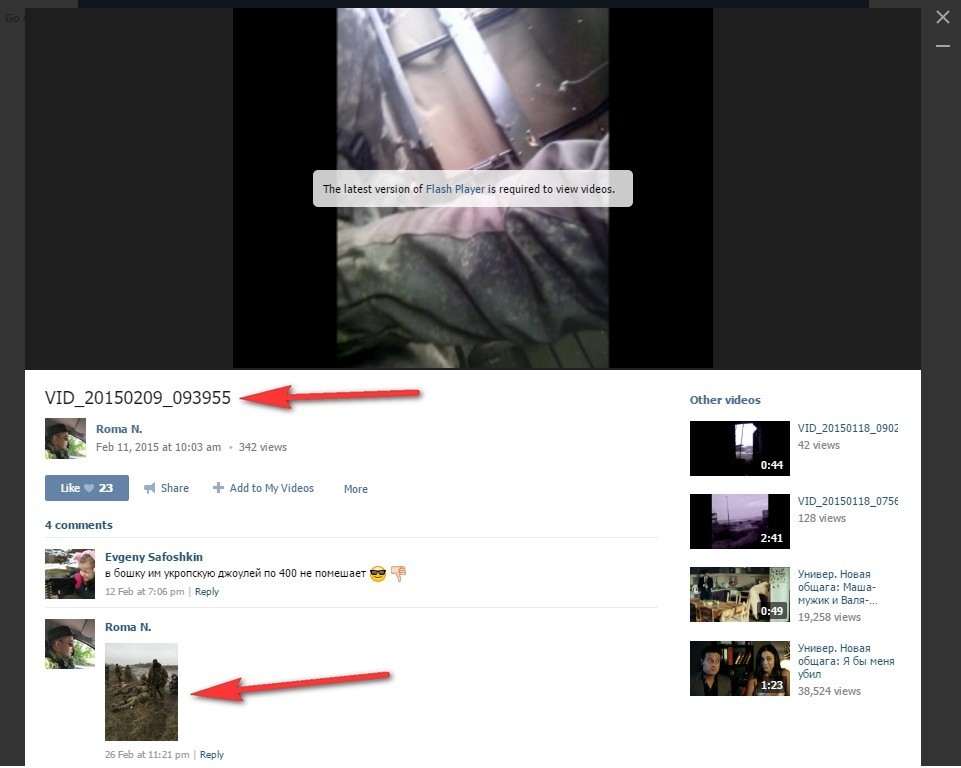 On February 26, 2015 Roman Nazarov added a picture where he and four other Russian occupants were taking photos with four Ukrainian servicemen lying on the ground. 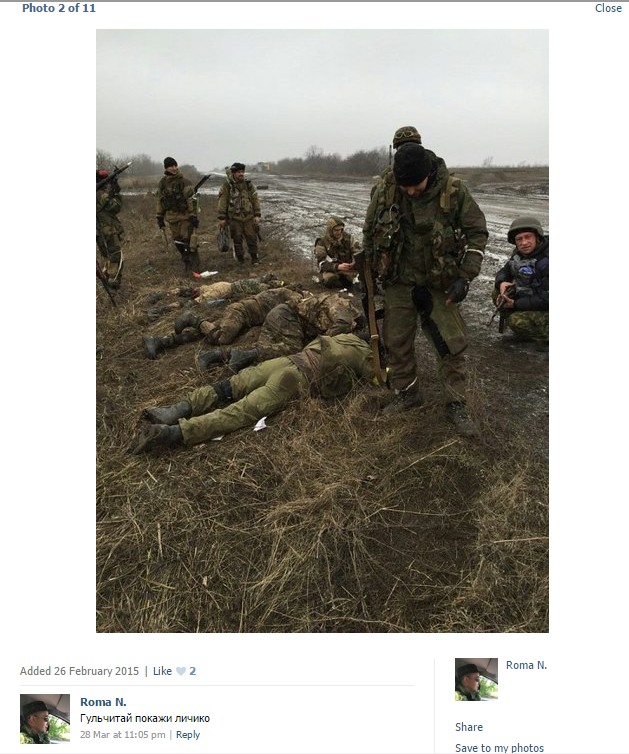 Also Nazarov added pictures with his face easily identifiable. Comparing these two pictures we can see that one Ukrainian serviceman changed his position and other three remained motionless. 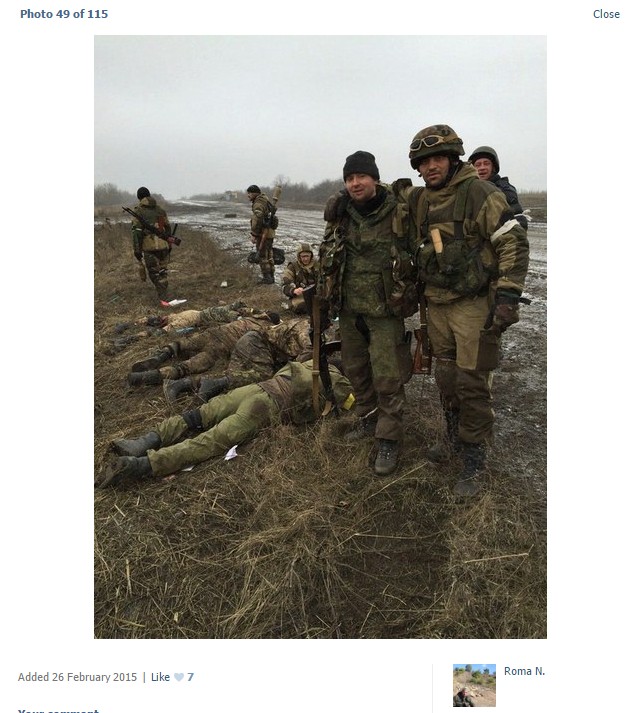 On April 1,2015 Igor Tagirov, a comrade-in-arms of Nazarov from so-called Legion battalion of the Russian hybrid army, reposted Nazarov’s video from February 9, 2015. His comment to the video: “Marauding – is in our genes)))” 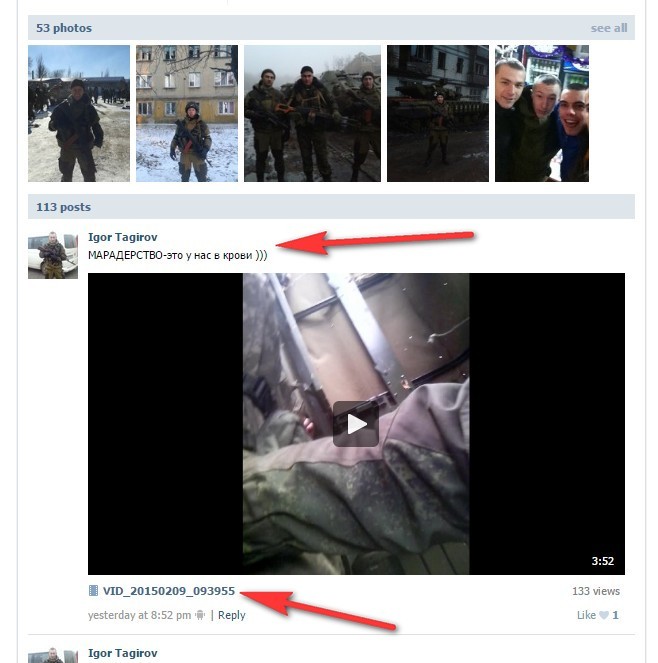 Copy of the video from February 9, 2015 where three Ukrainian servicemen were still alive.

A number of Russian sites providing so-called current updates from the war zone in Donbas published in their “Novorossia war chronicles” of February 10, 2015 a picture with caption “6:29 p.m. Militia footage. Ukrainian servicemen captured near Shyrokyne on February 10, 2015”.  In March 2015 people in the truck were identified by their relatives. 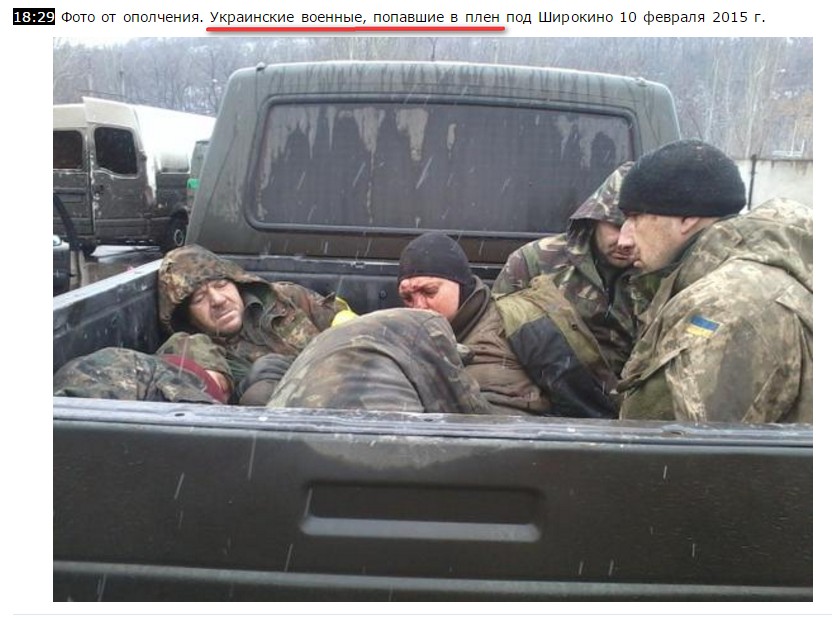 They became POW once they were disarmed and stopped any resistance to enemy. Who took picture of Ukrainian servicemen in truck at this moment?

On May 7, 2016 on Russian Youtube channel NovorossiaTV, appeared a video titled “Heroic deed of the Legion” with different militants telling about their “heroic deeds and achievements” during the time of so called “Debaltseve pocket” operation, bragging about thousands of captured and disarmed Ukrainian servicemen. One of the key moments of this mission was the battle of Lohvynove.

Militants marked or captioned in the video: Sergei Zavdoveev, callsign Frantsuz, commander of the Legion battalion; callsign Kazakh; callsign Leva; callsign Tatarin; callsign Nazar – only his face was covered in the video. He is the one giving the details of the battle and the capture of the Ukrainian servicemen on the highway between Debaltseve and Bakhmut (formerly Artemivsk). The interview of Nazar was illustrated with the footage of the capture and search of Ukrainian servicemen. He tells that “documents were taken from the POW’s and they were sent to Vuhlehirsk with Olkhon’s group”.

Video also contained slides of events from February 9, 2015. All the pictures have been found and will be analyzed below.

Let us continue identification of the person who filmed the truck.

We picked the video titled “Heroic deed of the Legion” for our analysis, rather than the video from VK social network, for its better quality.

White band on the lower part of the right leg is marked red. Dark green color of the “gorka” uniform is marked yellow. Left trouser-leg torn on the inner part is marked blue. The features of the clothes mentioned above are identical to what we can see on video frames and pictures from Nazarov’s album where he and other Russian occupants are taking pictures with four Ukrainian servicemen lying on the ground. 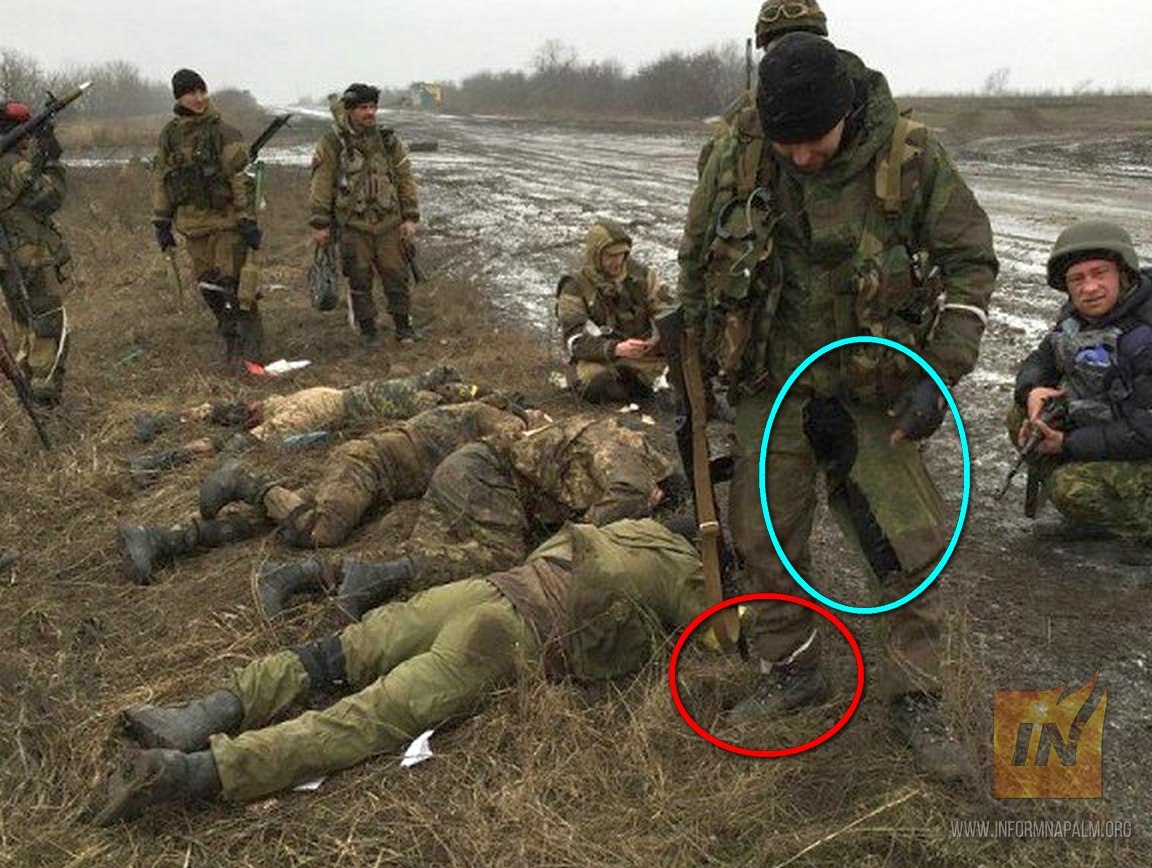 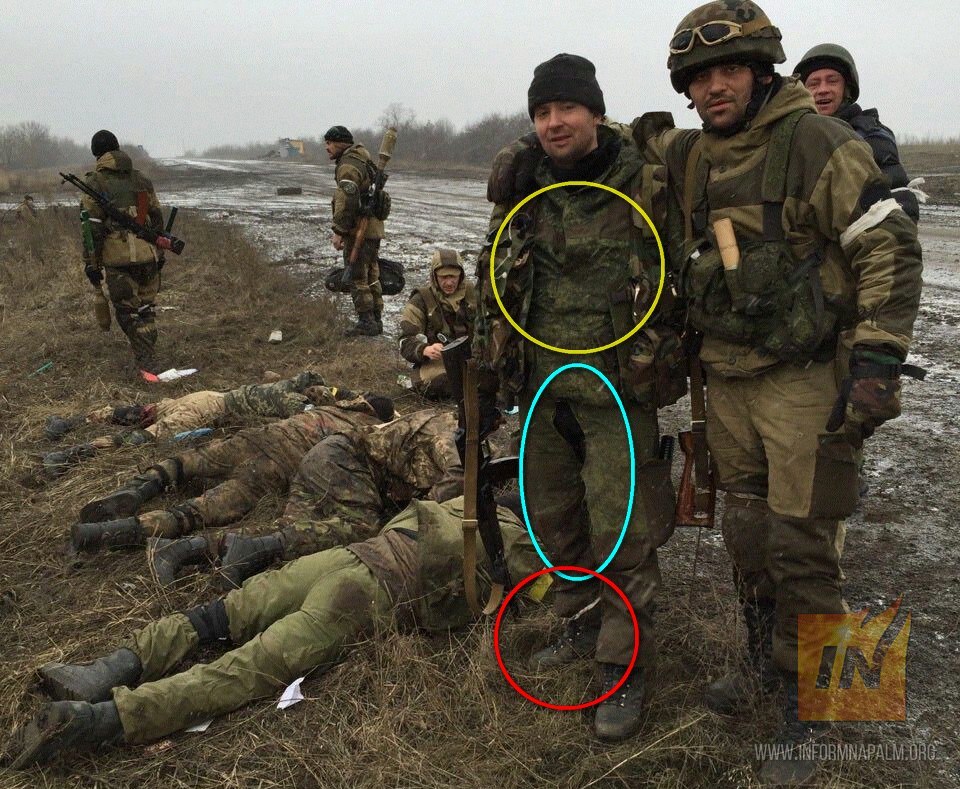 Frames from the video: White band on the lower part of the right leg: 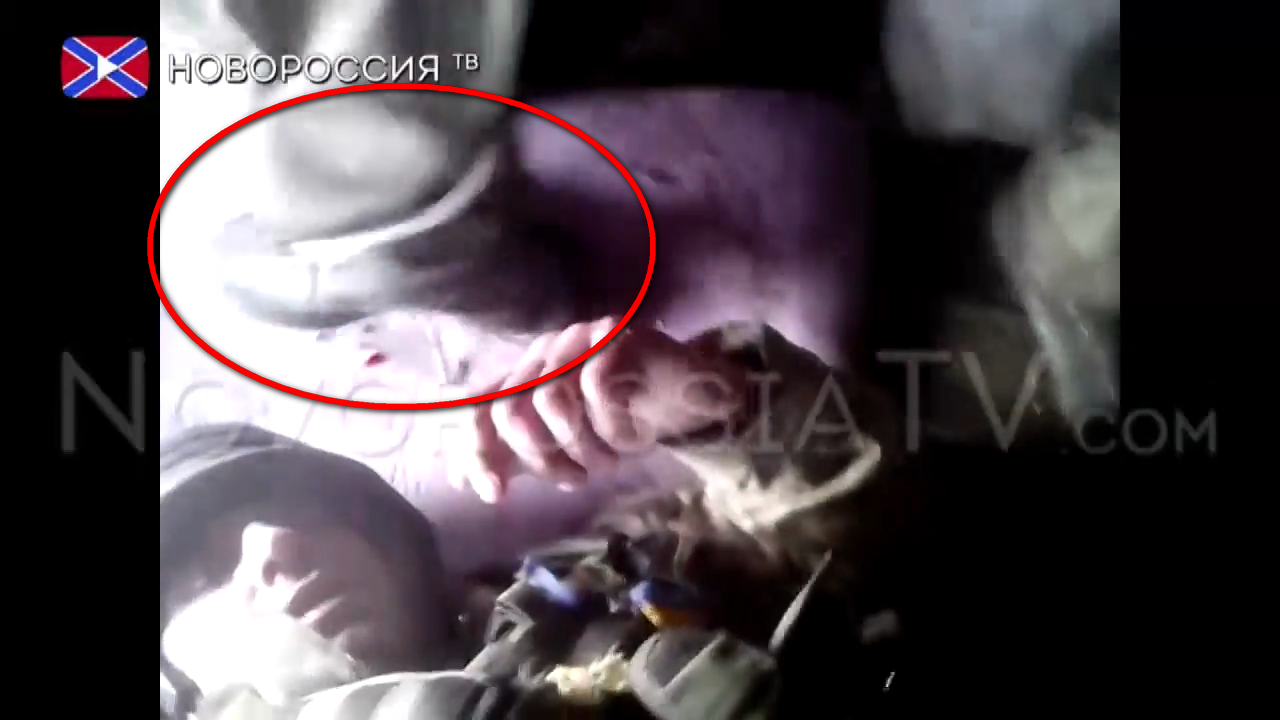 Frames from the video: Dark-green color of the “gorka” uniform: 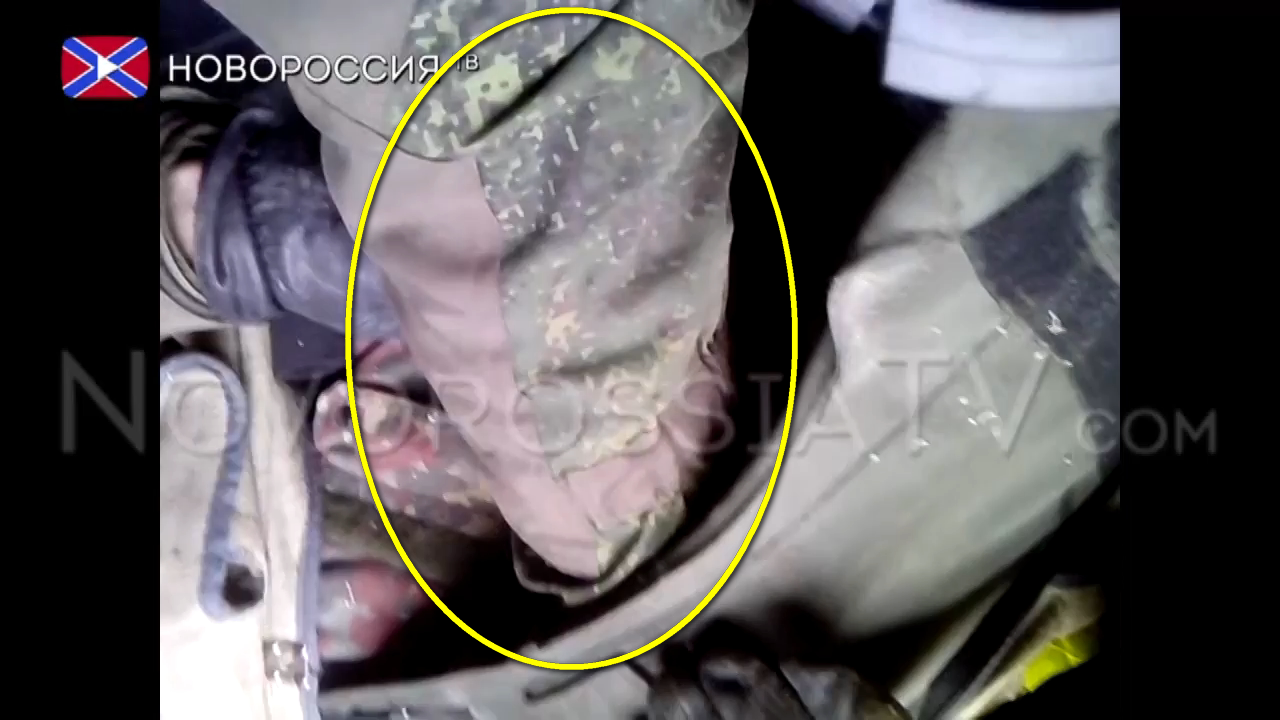 Frames from the video: Left trouser-leg torn on the inner part: 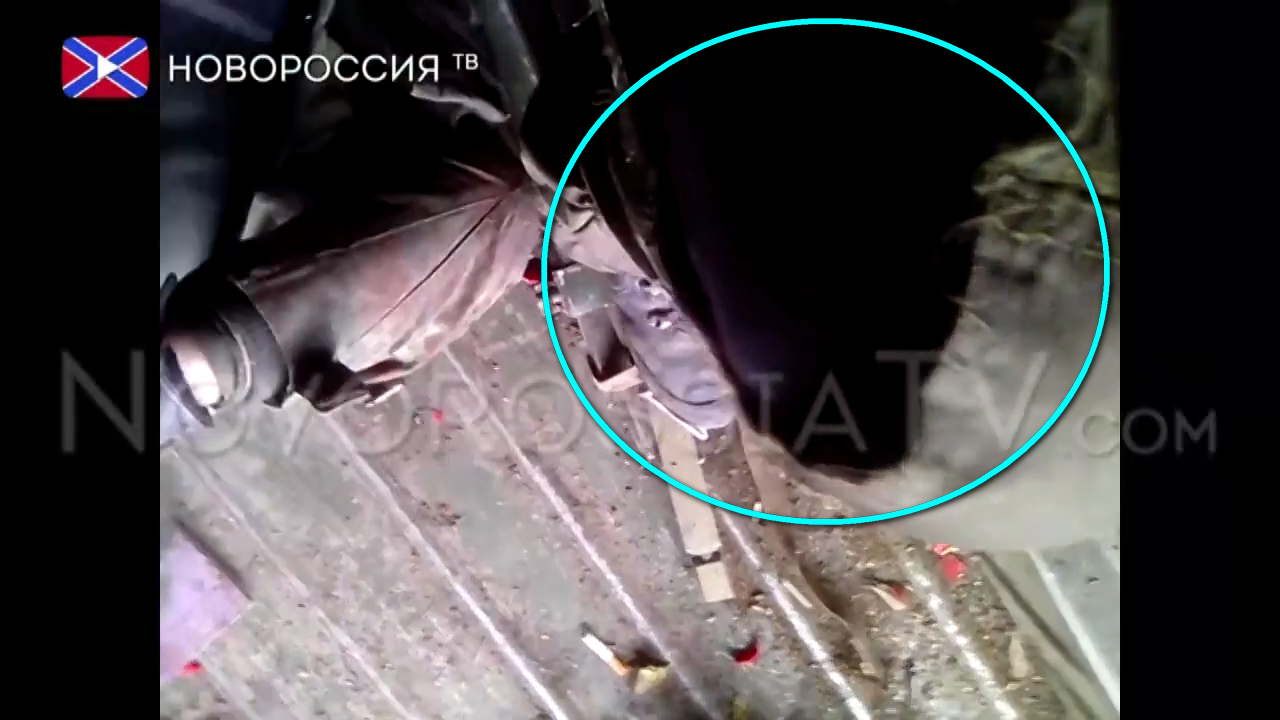 For the sake of comparison with militant, callsign Nazar, interviewed above, we are publishing here a recent picture of Roman Nazarov from the album of his wife from Donetsk. 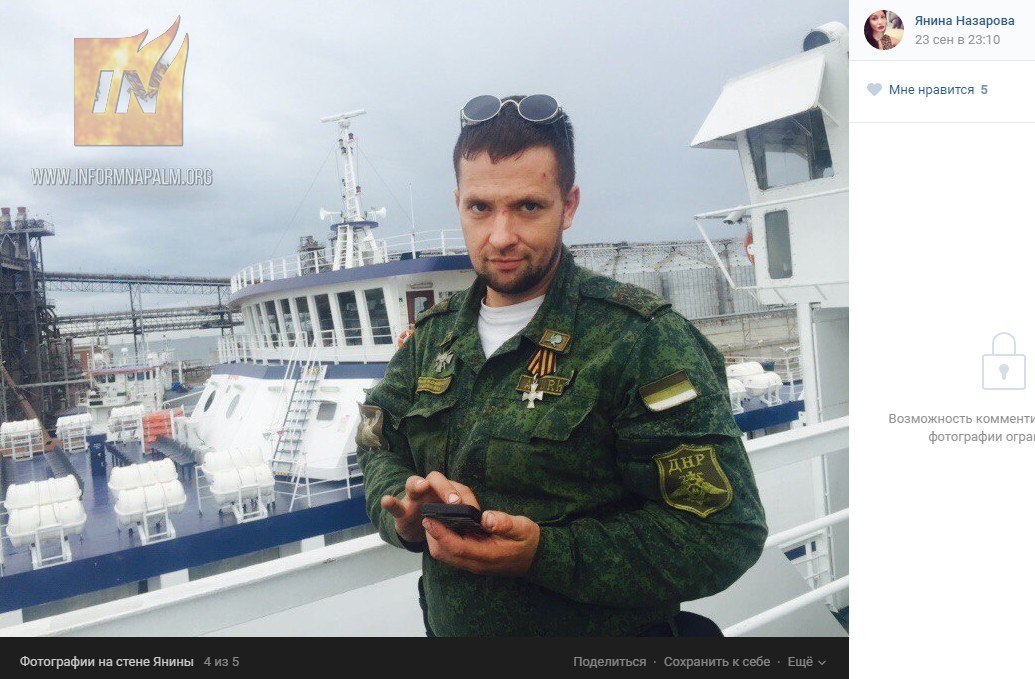 Pictures of militants’ interview shown in the video are connected to the events of February 9, 2015 discussed here.

All pictures were taken from different camera angles at the same place. They show moments of the tragic events of February 2015. 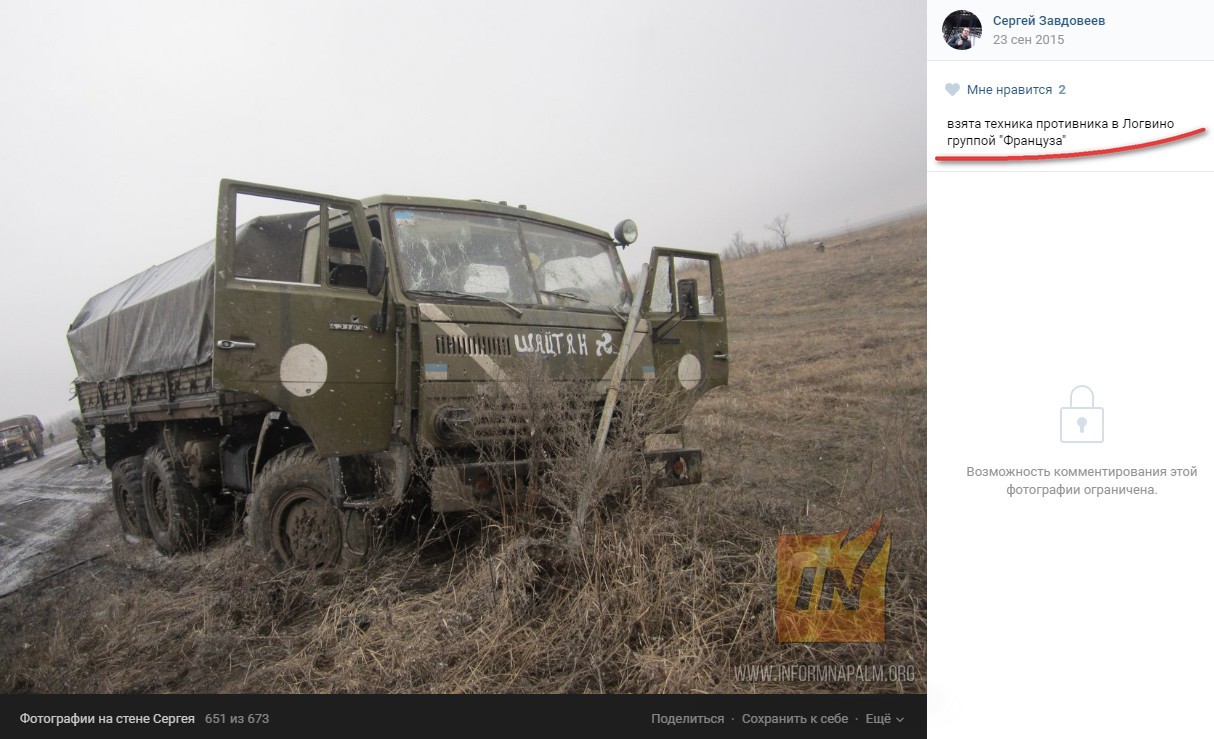 Part of the group led by Frantsuz 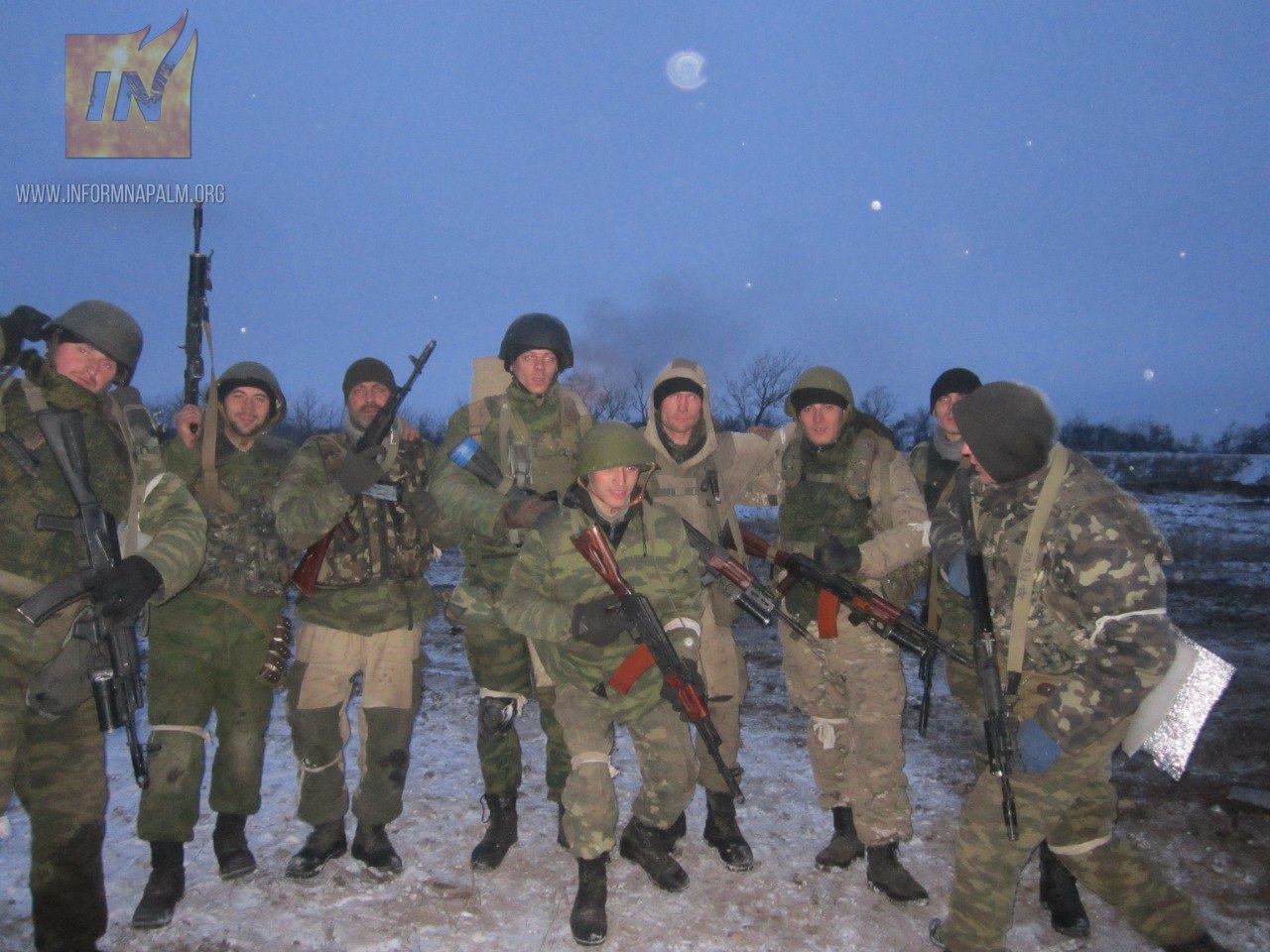 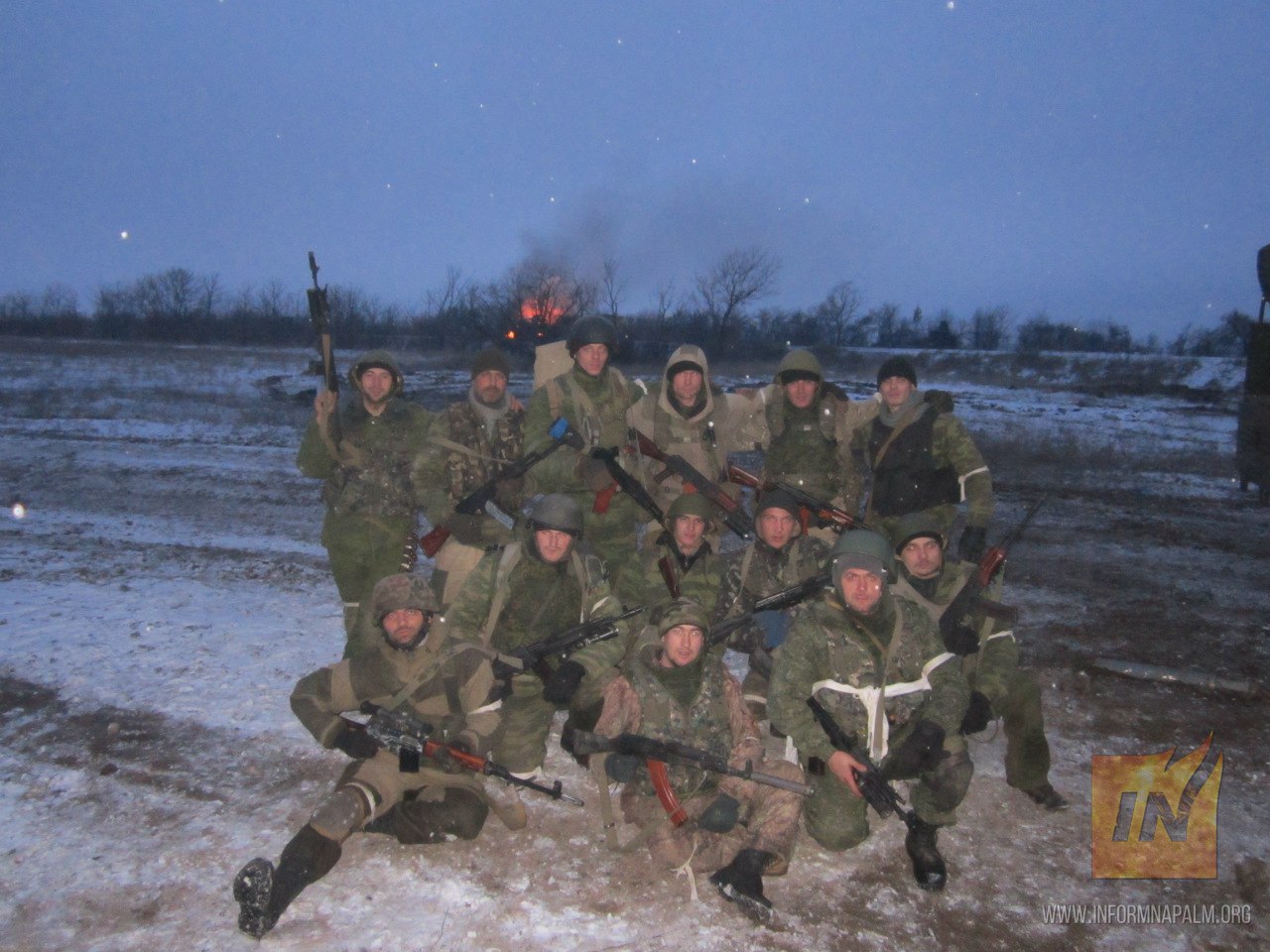 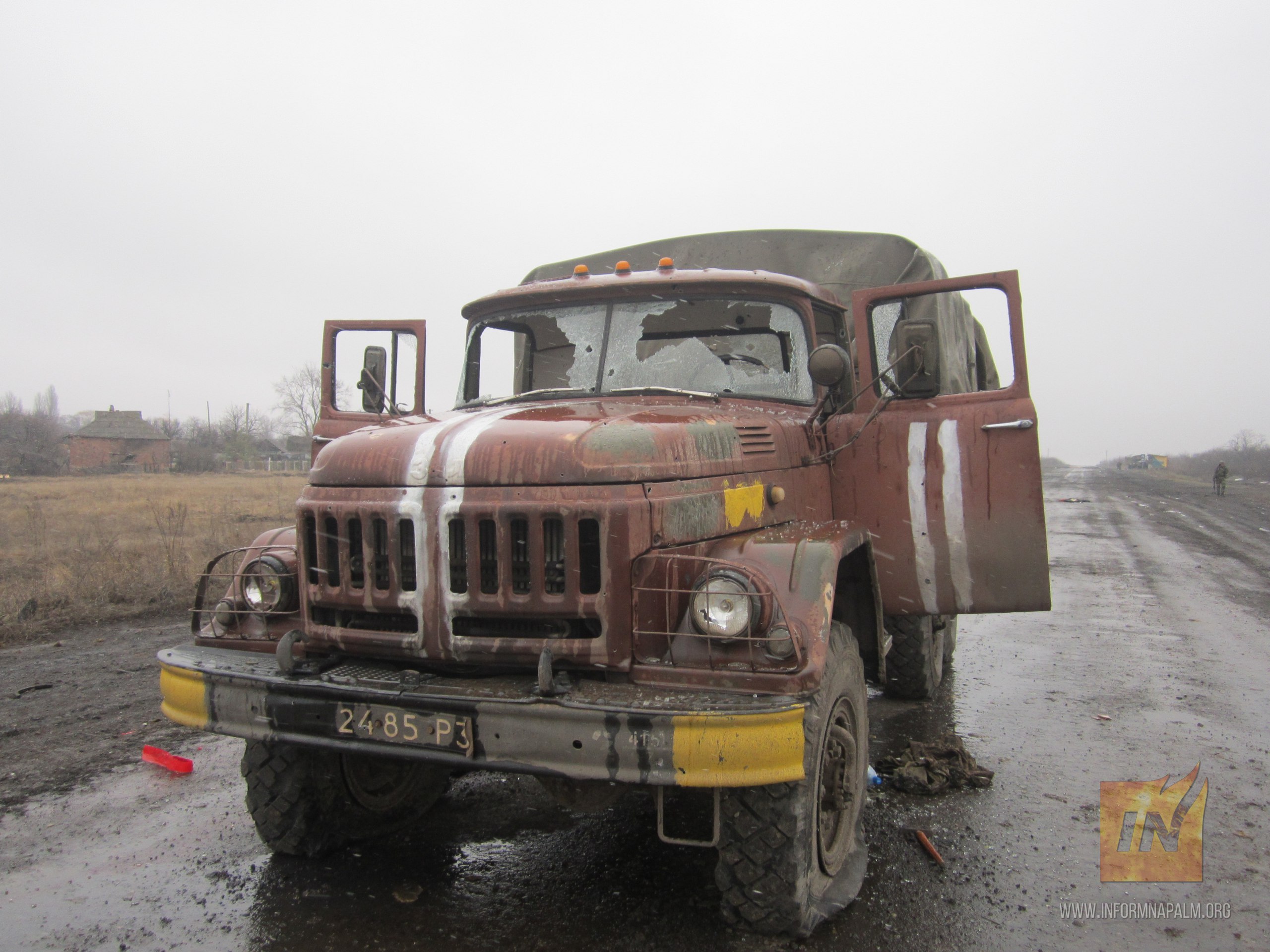 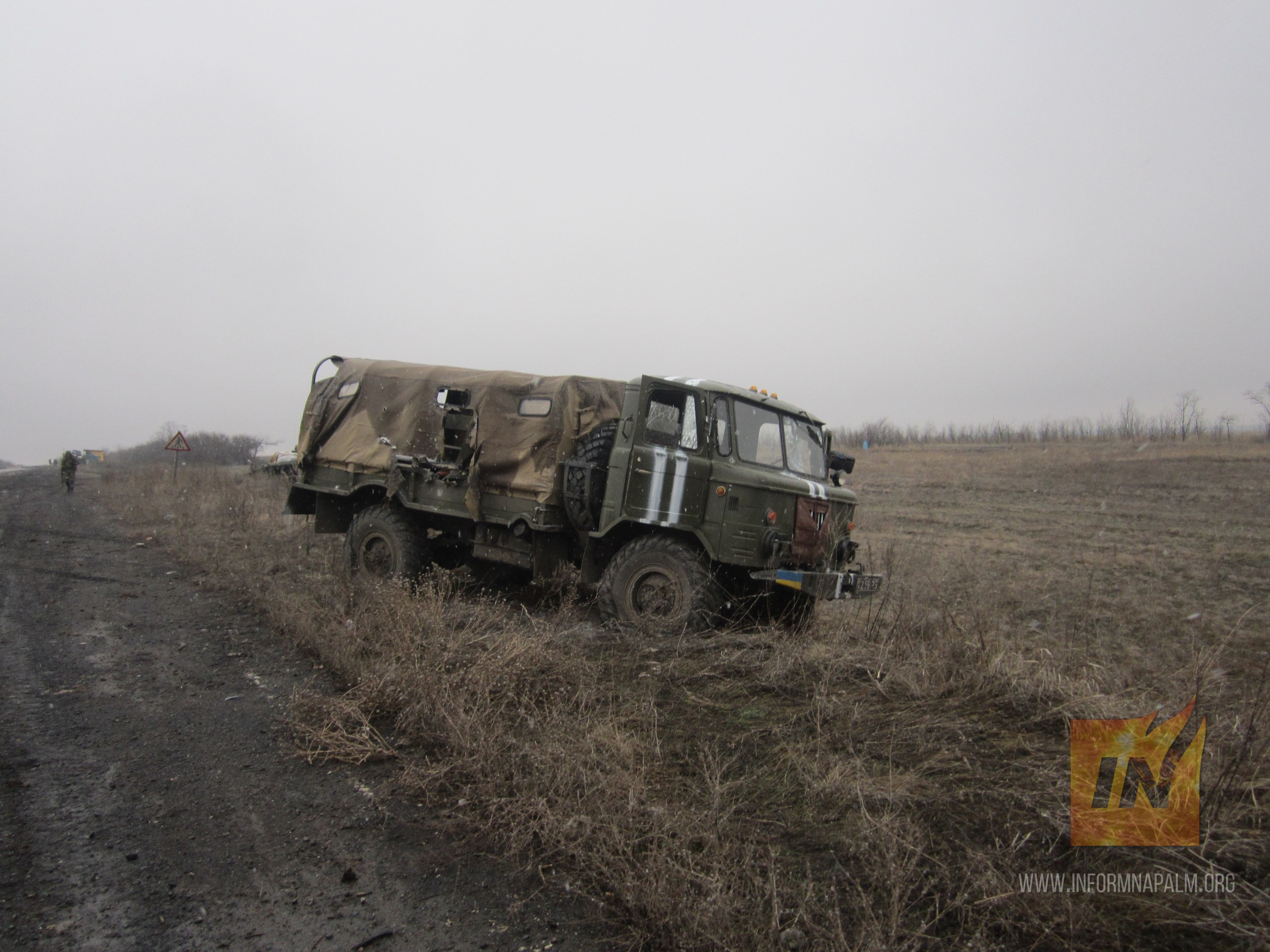 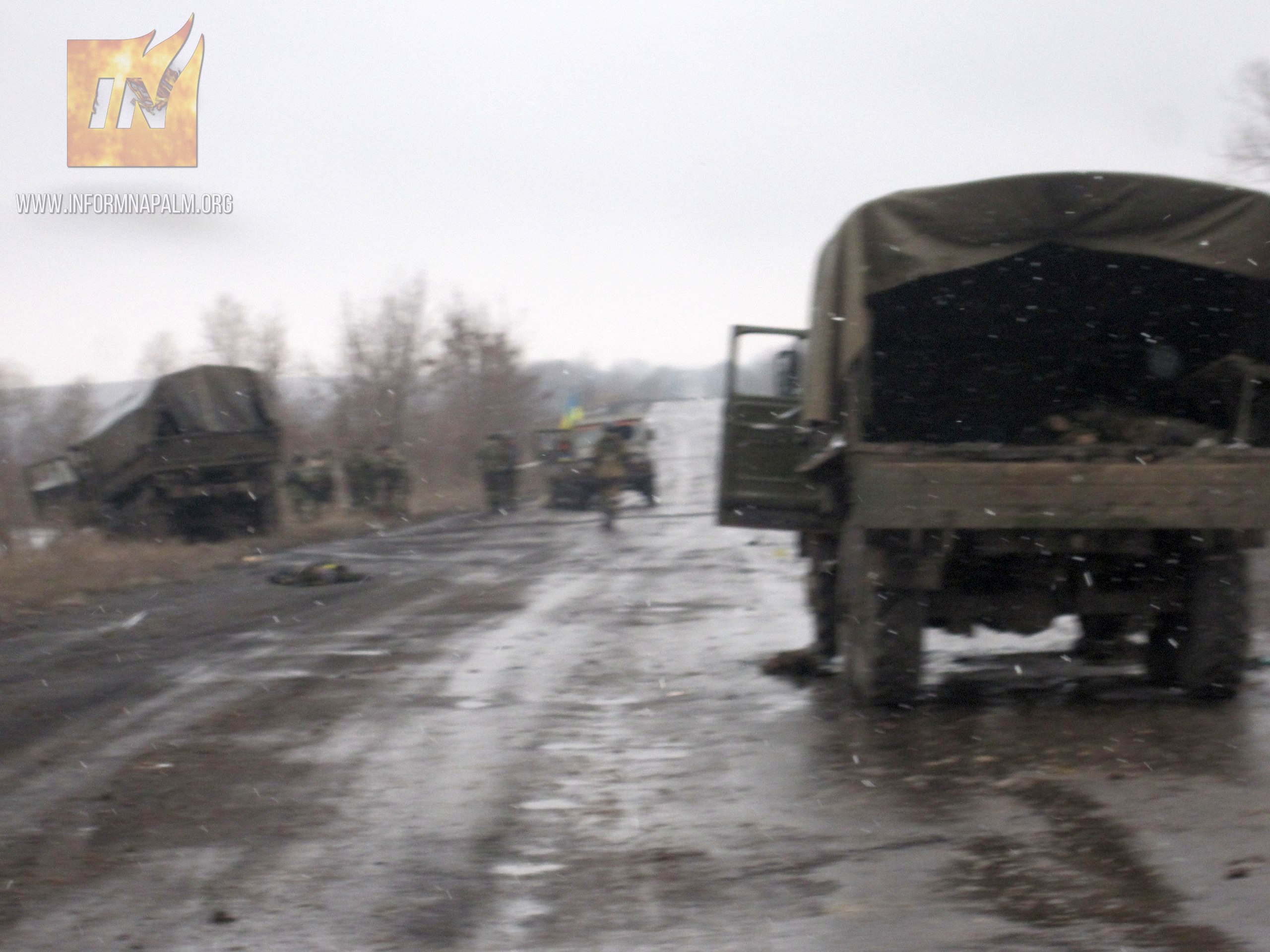 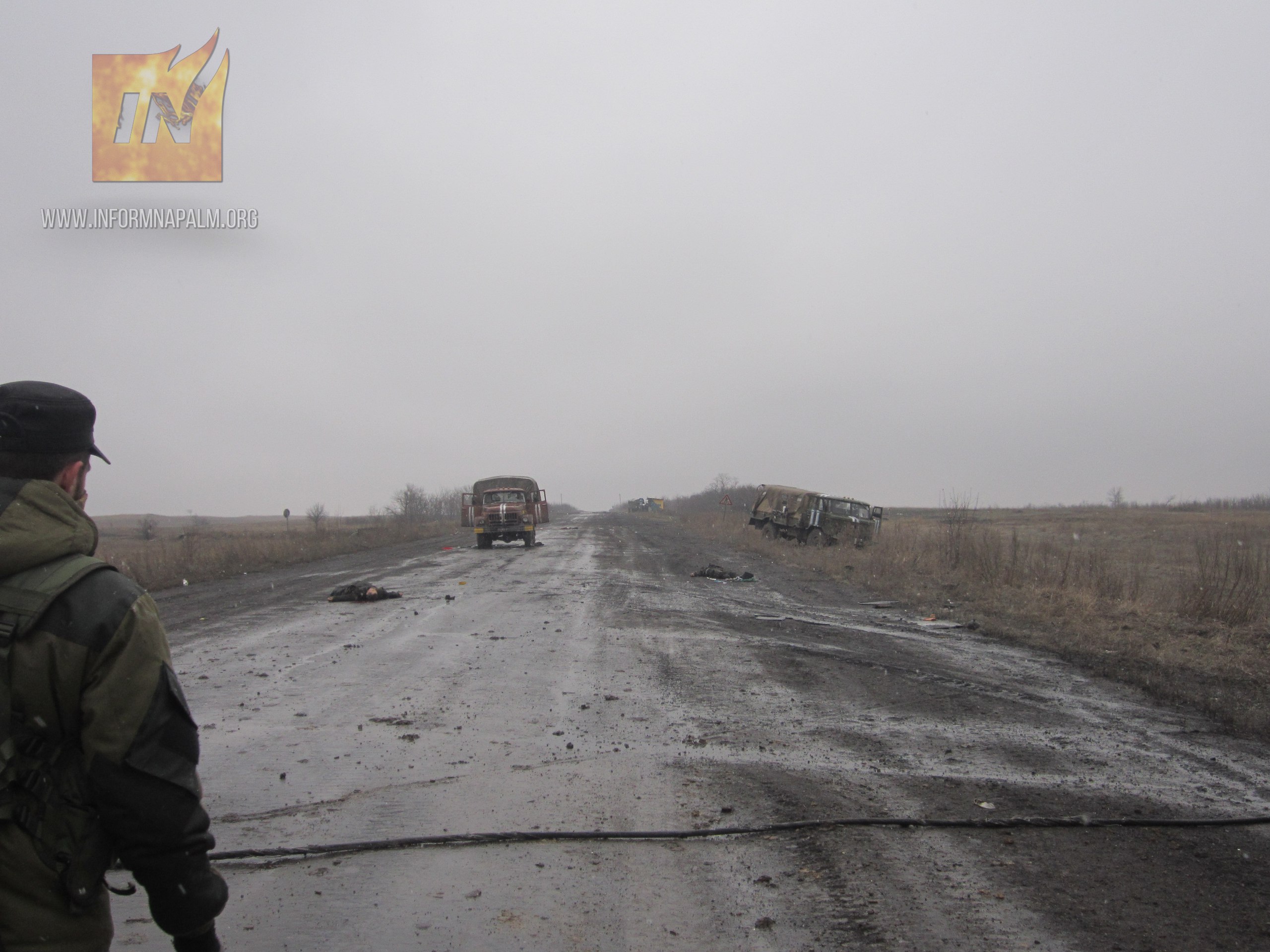 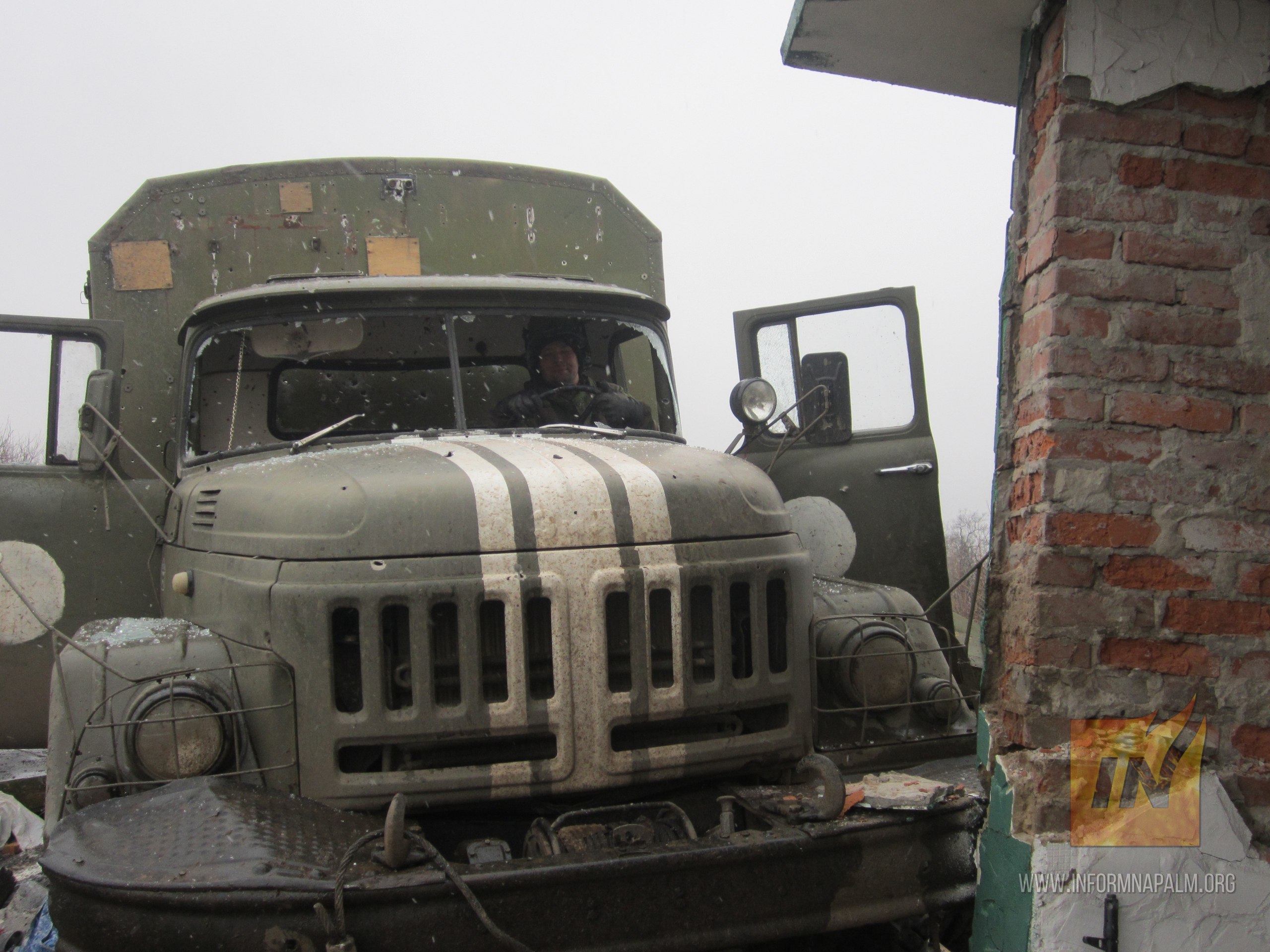 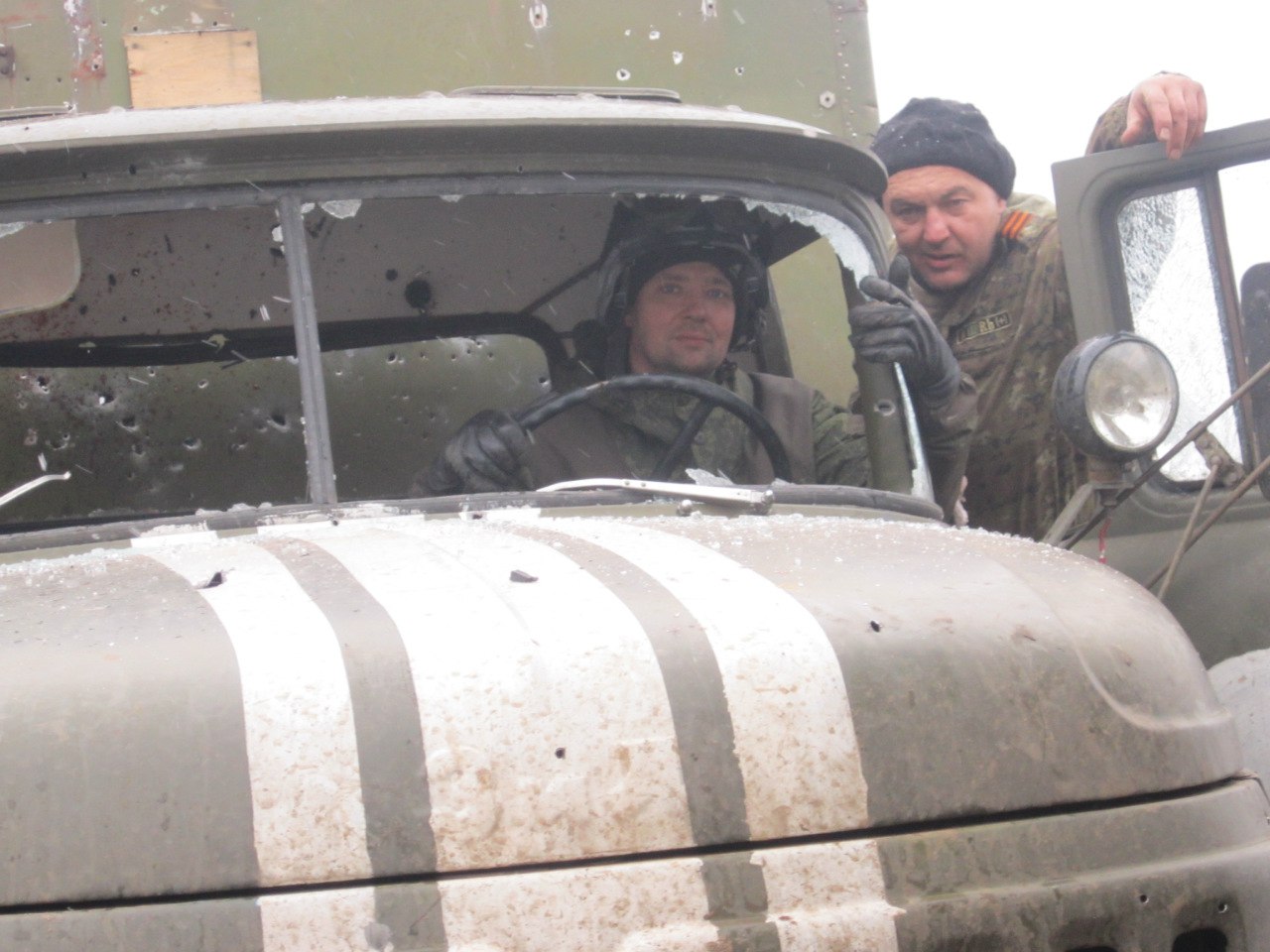 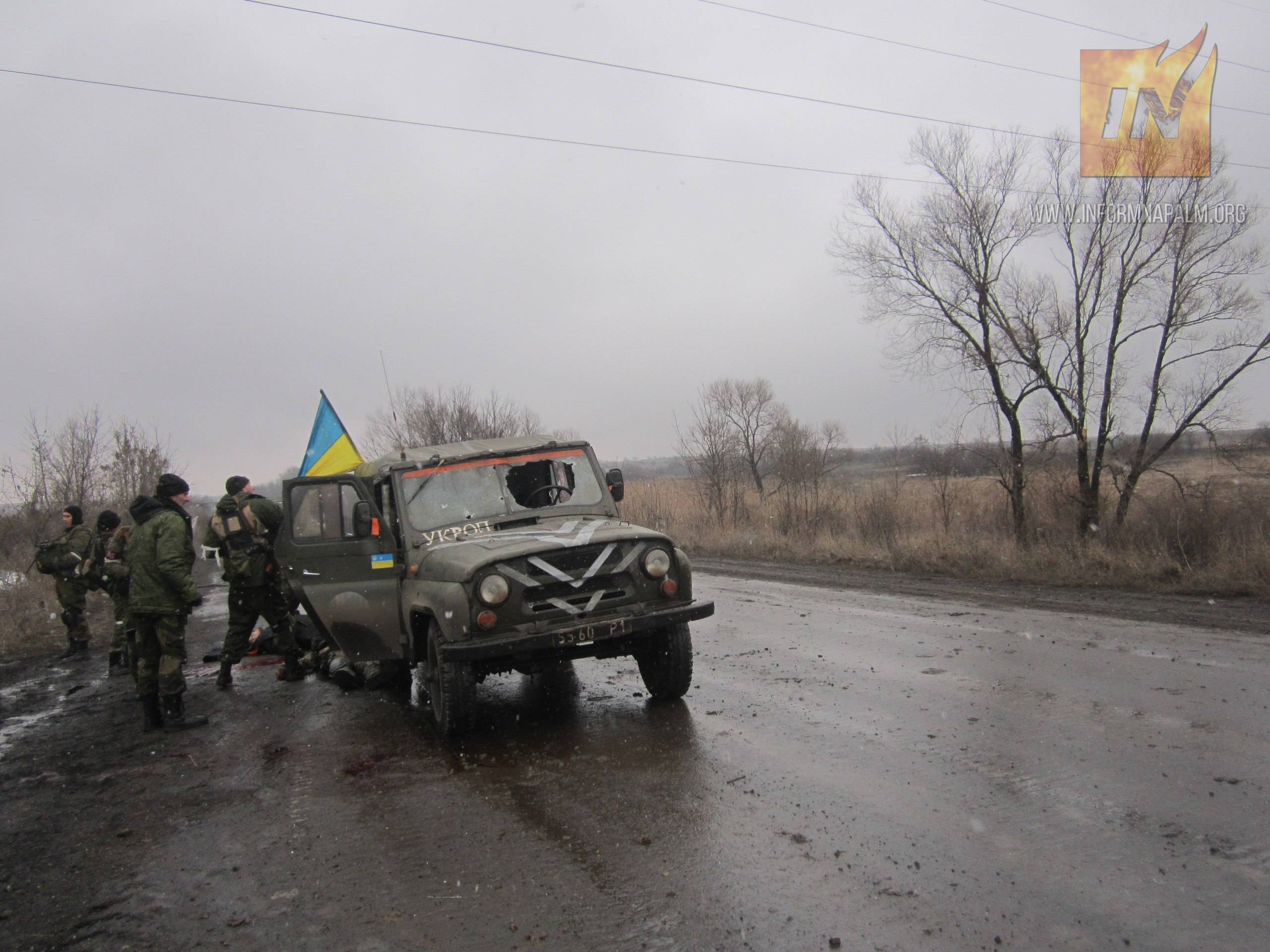 On the picture above, we see a UAZ minivan and bodies of Ukrainian servicemen lying close.

There were five officers of General Staff of the Ukrainian Armed Forces in the UAZ van : Serhiy Tsyganok, Svyatoslav Vasylenko, Anton Makarenko, Artur Muzyka and Ihor Pavlov. They were to deliver specialists and communication equipment for the military units in Debaltseve. But on the highway near Lohvinove, their van got ambushed by the militants.

The shooting location is identifiable on several video frames. We would like to point one of them, where a bus stop painted yellow and blue is visible across the road (marked by red arrow). The frame is identical with the picture mentioned above where Nazarov is posing with four Ukrainian servicemen lying on the ground. 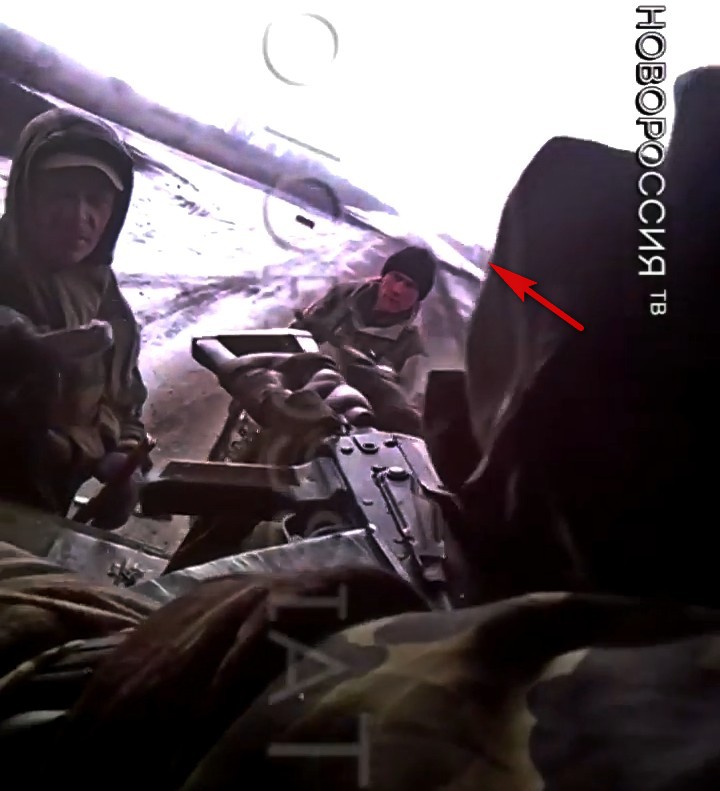 By the way our colleagues from Myrotvorets Center already identified some of those involved in these tragic events of February 2015, and added them to their database. The military criminals will not go anonymous. 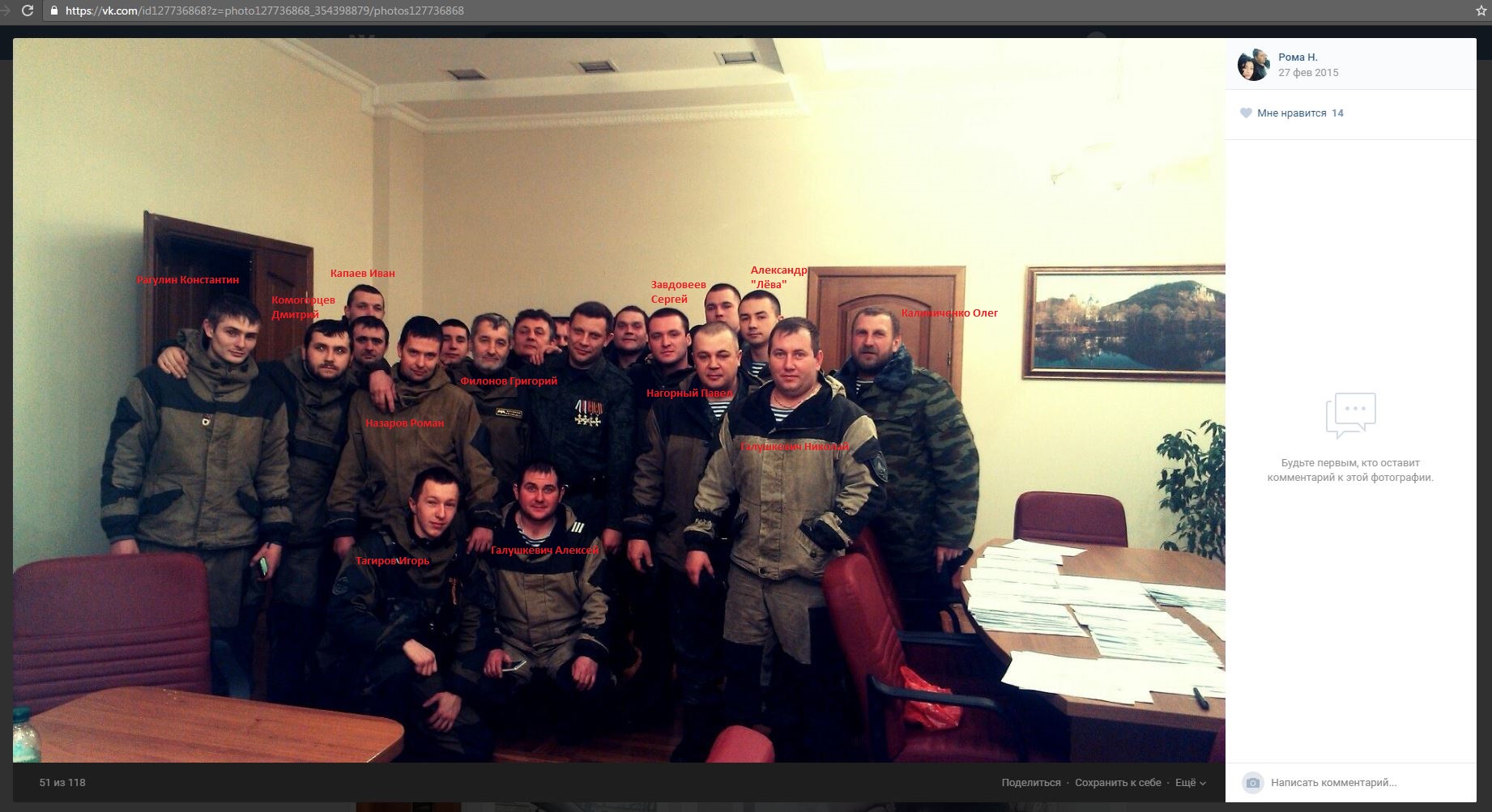 This publication was prepared by Vidal Sorokin, translated by Eugenia Zlamanuk , edited by Artem Velichko

No Responses to “Identification of persons involved in extra judicial killing near Debaltseve.”