In a hybrid way: why Russia was preparing to ship equipment in UN livery from Novorossiysk 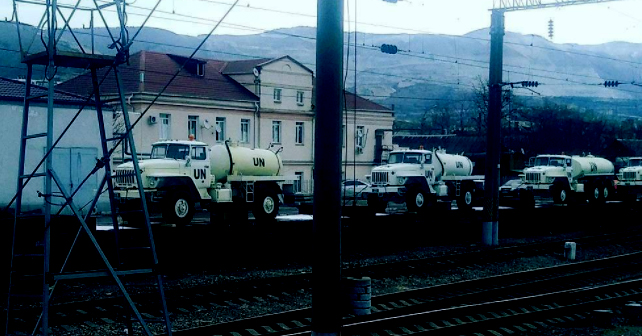 Fuel trucks in UN livery were seen at a railway platform on March 5 in Novorossiysk . This cargo could be destined either for the “Syrian Express”, or for the hybrid war in Donbas.

In the course of social media monitoring, volunteers of InformNapalm volunteer intelligence community noticed strange photos that could reveal the preparation of the Russian Federation for provocative special operations in Syria, and possibly even in occupied Donbas. 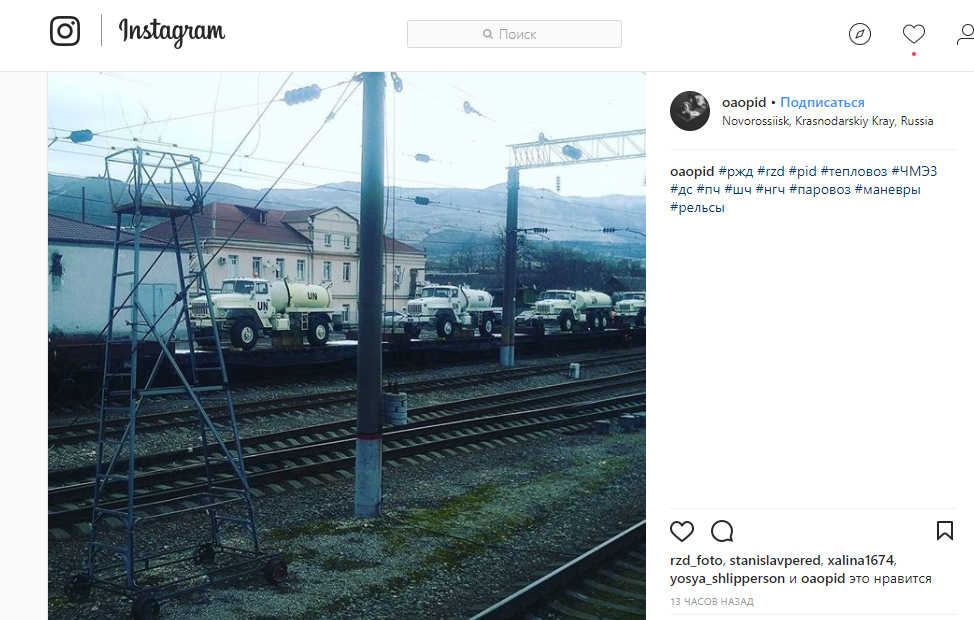 Novorossiysk is the home of the naval base of the Russian Black Sea Fleet, which is serving as the loading point for the “Syrian Express”. In addition, it remains unclear if there was any other UN-marked equipment that was not caught on camera by the spotter.

Read more: War in Syria: Russia Paved Its Way to the Ground Operation Through the Sea. Infographics

It could also be a regular dispatch of equipment, but we do not know whether Russia has the right to put the UN livery on it.

As of 2017, only 98 Russian peacekeepers were part of the UN peacekeeping missions: 38 police officers, 55 military observers, and 5 military liaison officers. Obviously, such modest force does not require so many fuel trucks.

Let us remind that Vladimir Putin’s unexpected willingness to support the deployment of UN peacekeepers in Donbas puzzled many experts late last year. Perhaps, that is how the Kremlin decided to give a hybrid response to the further pressure from the USA. US Special Representative for Ukraine Kurt Volker had stressed that Washington insisted on inadmissibility Russian citizens from joining the UN peacekeeping mission in Donbas, should the decision to deploy international peacekeepers be eventually put into effect.

Since 2015, volunteers of the InformNapalm community have repeatedly spotted on social networks the Russian servicemen transferred to the border with Ukraine, where photos of vehicles and flags with the markings of UN peacekeepers popped up. This includes the servicemen of the “peacekeeping” 15th Motorized Rifle Brigade of the Russian Army, who were seen on the occupied territory of Donbas and who took part in seizing Crimea.

We must note that the “Syrian express” version is supported by the news about the Russian Black Sea Fleet large landing platform/dock (LPD) Orsk passing today through the Turkish straits from the Black Sea into the Mediterranean and heading to the Syrian port of Tartus, where the logistics base of the Russian Navy in the Mediterranean Sea is located. LPD Orsk, judging by its draft, was heavily loaded: on the upper deck, a large number of covered KamAZ military trucks were observed, as well as ZIL-131 trucks with army standard van bodies.
The question is, are we witnessing preparation by the Russians for another hybrid trick? Would they disguise themselves as UN peacekeepers, in the battles for control over Eastern Ghouta?

No Responses to “In a hybrid way: why Russia was preparing to ship equipment in UN livery from Novorossiysk”