Information warfare: who is behind a bogus “monument to Hitler” in Donetsk Oblast 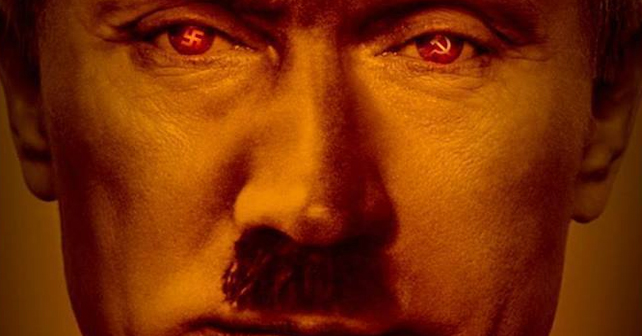 The information warfare is not just the horror stories about Ukraine on the leading Russian TV channels. It pervades cyberspace in various areas: online and social media, blogs and forums. It turns out that even Wikipedia is not immune, especially its Russian version. Pages on sensitive issues written by its Russian authors have been noticed to have a particular twist. But recently an outright information provocation against Ukraine has been spotted on a Russian-language Wikipedia page.

On October 12, Andriy Taraman a local of the village of Olexandro-Kalynove and an activist of Eneida NGO made a Facebook post expressing surprise over a new “fact” on Wikipedia about his native land.

“Today I was asked to show the Hitler monument, however I never even heard about it. – But it is on Wikipedia, I was told … “, – Andriy wrote.

At the time of writing of this article, the Wikipedia page about Oleksandro-Kalynove, in the Sights section, indeed contained a note that the village had a “monument to Hitler” (page archive).

Of course, the “monument” does not exist and never did. This is a fake created with the sole purpose of influencing the perception of Ukraine in the Russian-speaking audiences.

The line was promptly deleted by Wikipedia authors from Ukraine, but the screenshots pointing to the date and the author of this edit remained in the comments under Andriy’s post. The IP-address leads to Kharkiv. 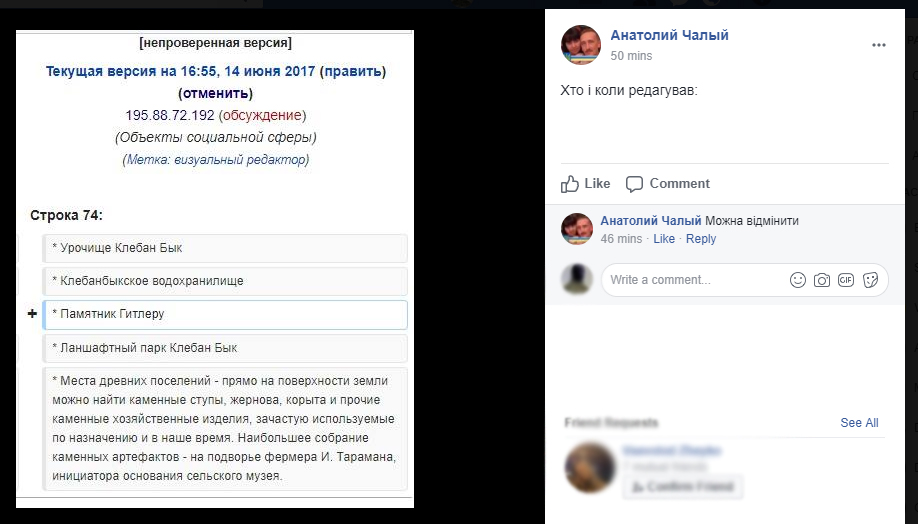 Kharkiv Oblast has long been in the focus of subversive activity on the part of Russia. InformNapalm wrote about the correspondence of Russian politicians with local pro-Russian activists who took part in the information provocations against Ukraine.

Read more: FrolovLeaks VII: the costs of the “Russian Spring”

Moreover, in early September, the head of the Ukrainian Security Service (SBU) Vasyl Grytsak told reporters that on August 17, a large Russian intelligence group was detained in Kharkiv. It consisted of 18 people and carried out sabotage and reconnaissance activities on Ukrainian territory.

Why was Oleksandro-Kalynove targeted by the provocation?

In our opinion, the answer to this question is the active pro-Ukrainian position of the local residents, and namely Andriy Taraman. By the way, it was at his initiative that a museum was opened in the village, in which there are exhibits from the current war in the east of Ukraine.

Andriy Taraman also helped distribute the comic book teaching children in the front-line areas safety rules when accidentally finding land mines and ammunition fragments. This book was developed by the activists of the Prometheus Center, who are also the authors of the popular guidebook Donbas in Flames for journalists and observers in the conflict zone.

This is just an example of a fake about Ukraine presented as a fact in the Russian-language Wikipedia. It came to our attention by accident, but who know how many other similar entries go unnoticed.

This publication was prepared especially for InformNapalm. Translated by Victor Danilchenko,  edited by Artem Velichko. A link to the authors and our project is obligatory for any reprint or further public use of the material.
(Creative Commons — Attribution 4.0 International — CC BY 4.0)

No Responses to “Information warfare: who is behind a bogus “monument to Hitler” in Donetsk Oblast”