Energetical And Tactical Preconditions of Possible Intensification of Fights in Donbas 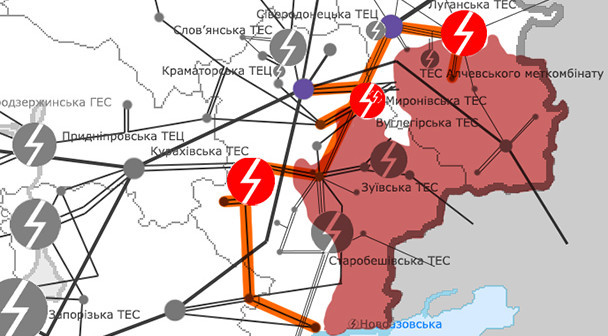 InformNapalm volunteer community continues to monitor the situation in the occupied territories and in the zone of ‘anti-terrorist operation’.

We are getting information about the active re-grouping of the terrorist forces for some time already, but there was a significant increase in the number of ‘vacationers’ during the last week as well. The insiders from numerous settlements report that several hundreds of fighters have arrived to their observation areas, and those militants are absolutely not familiar with the locality. Such information was received from Horlivka, Pervomaisk and Luhansk. Besides that, the fact of the repeated military draft of the participants of hostilities in 2014-2015 have been confirmed. Now, after a short break in September of 2015, these militants are urgently drafted back. As of January 22, 2016, about a hundred of separatists from one of the coal mines in Makiivka were enrolled and sent to Novoazovsk. Decline in the number of armored vehicles in the rear areas was registered too, and this may indicate their deployment closer to the front-line.

The economic collapse in the so-called ‘DPR/LPR’ is the main reason of such intensification of activities of the illegal armed formations. The plants were looted and moved to Russia, problems with fuel and weakening of financial aid from the Russian Federation affects militants’ moral and psychological condition. The terrorists critically need to take the control over objects of energy infrastructure: Kurakhivska, Mironivska and Luhanska (in Shchastya settlement) heat power plants. This will allow them to dictate terms to the Ukrainian side, and partially solve some of their economic problems. Also, according to the Cabinet of Ministers’ Decision No. 263, the uncontrolled territories of Donetsk and Lugansk Oblasts were excluded from the energy market of Ukraine.

Information about an unofficial visit of the Russian presidential aide Vladislav Surkov in Lugansk and his statements about the failure of the Russian leadership’s plans to include ‘DPR/LPR’ in the Russian Federation testifies the plans for the elimination of poorly controlled gangs. In this regard, the plots around the 3rd motorized rifle battalion, ‘Troy’ detachment and other armed groups continue to thicken. Militants mutually accuse the opposing groups in the struggle for power, treachery, trade in arms and drugs. All of these factors serve as an indicator of the tension and are accounted for in the analysis and forecasts of the situation.

Petrovsky District of Donetsk, Dokuchaievsk, Staromykhailivka. According to the insiders, the following equipment is concentrated in the Western outskirts of Donetsk – x4 SP guns of calibre more than 120mm (supposedly, 2S1 ‘Gvozdika’ units near the mine No.12). Up to 2 armored regiments and around 20 ‘BMP’ APCs are located near ‘Zeleny Gai’ (supposedly a battalion tactical group). A little bit to the North, in the living areas of ‘Trudovskaya’ mine, 2 armored regiments and a troop battalion are deployed (according to rough estimates it is another battalion tactical group). Considering the distance between these groups, we can talk about the creation of high-density combat orders, which are characteristic for offensive actions. There is also a concentration of the equipment and troops between Staromykhailivka and Petrovsky District of Donetsk. Our people could not get there, so we can only guess the exact numbers. The fact of destruction of two units of terrorist military equipment was registered last week (ammunition load detonated at the moment of engines’ launch). 1 BM-21, 2 T-64 tanks, 4 BMP armored vehicles and about a hundred of soldiers were noticed to the South, in the up-cast of ‘Skochinsky’ mine (this is supposedly another regiment tactical group). Besides that, the flanks have been strengthened. The reinforcement of the combat formations is being carried out in the area between Donetsk and Dokuchaevsk. There is a strange movement of forces in area of the North Station – Airport. Every evening 4 vehicles (presumably, the command and staff units) depart in the direction of the Donetsk airport and return back in the morning. For two nights in a row at the same time at the Kirov, Kuibyshev and Leninsky districts insiders hear the machine gun fire. Perhaps this is a preparation for combat activations.

This way we can assume that the terrorists prepare offensive operation in the directions of Petrovsky District of Donetsk – Marinka which will involve 2 battalion tactical groups and Staromykhailivka (1 tactical group). The goal will be to reach the Karlivka – Kurakhovo baseline, since it will let separatists control the energy system of the Ukrainian part of Donetsk Oblast and have lever of pressure on Akhmetov.

We also noticed the reinforcement of the enemy in the area of Pervomaisk – Stakhanov. Up to a regiment of special forces troops arrived to Stakhanov on January 25, 2016. All of them were equipped with white camouflage cloaks. Equipment columns move from Luhansk to Brianka settlement for several nights already. This can testify to the accumulation of enemy forces for a strike from east side towards Stakhanov-Kalinovo-Troitske with access to the northern shore of the Mironovsky reservoir.

Lack of information makes it impossible to accurately predict the strength of the strike. Besides that, the lack of full information on Horlivka locality (except the alleged arrival of 40 heavy equipment units in the territory of the a motor depot of ‘DonbasEnergo’ a few days ago) does not provide us an opportunity to confirm the probability of the aforesaid strike, because it has no sense without a simultaneous strike in Horlivka-Holmivskyi-Novoluhanske direction. In case of success the militants will gain control over the Mironivska heat power plant, and accordingly the settlements of Popasna, Artemivsk, Kostiantynivka. The militants want to seize the initiative on the given nodes of the energy system in order to act the same way as Ukraine now dictates conditions to the Crimea in the field of electric power sphere.

As for the Luhansk power plant, our insiders say that militants have deployed at least a reinforced battalion (with up to 8 units of 2S1 ‘Gvozdika’ 122mm self-propelled guns) near Vesela Hora in Luhansk. In addition, the arrival of new forces of the Russian Cossacks to the villages of Shchastya and Stanitsa Luhanska has been registered.

Since the Luhansk power plant is nodal and fits the energetical concept of the possible offense, we should expect here the escalation of the combat actions.

These estimates do not take into account the political leverages and represent only the social and military preconditions, which may affect the activities of terrorist forces. Please consider the situation in the abovementioned areas.

Also we ask our readers in the conflict zone to send us any available information about terrorists’ movements and actions. You can contact us via the feedback form, twitter or facebook.