Identification of the ‘Troy’ Terrorist Is Completed 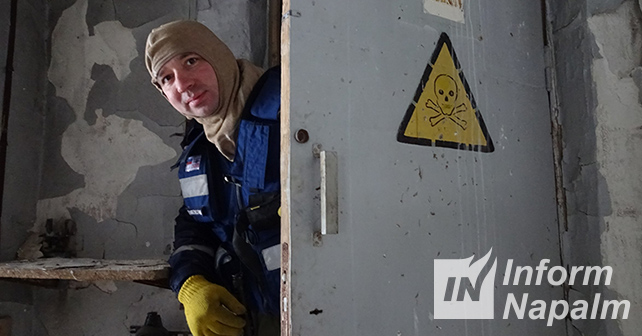 The InformNapalm team was able to identify ‘an explosive specialist from a special ‘Troy’ detachment who promised ‘set Rostov city on fire’ if anybody would try to besiege and attack the unit.

After an anonymous source (claimed to be a ‘Troy’ member) shared an ultimatum to the GRU (Russian foreign military intelligence directorate of the Army’s General Staff) regarding a possibility to set fire to a number of targets in Rostov Oblast, it was necessary to consider several versions of this story.

InformNapalm considered a possibility of a simple prank, which the Russian Intelligence Service designed to just compromise ‘Troy’, so there would be a reason to destroy it later.

After the information has been checked and a list of the dangerous places has been confirmed it was agreed that such conflict between the Russian special forces and terrorists existed and it would be wise to make everything public as well as to monitor the situation. Besides, if the terrorists were serious about the planned explosions in case of their unit would be attacked, it would be still logical to warn the Russian special forces (even if today it is an enemy) to avoid possible casualties among civilians in Rostov Oblast.

And you can understand how badly the InformNapalm team members would want to find out a real identity of this anonymous source. It was only fair for the OSINT researchers to start a hunt disclosing a ‘Troyan’ ultimatum secret.

All of a sudden this person was trailed; volunteers analyzed the files and looked through the addresses of the places in question when they saw data, which belonged to the Russian Ministry of Emergency Situations in Rostov Oblast. Unfortunately, the data was inaccessible and a direct linked could not be open.

But it was still possible to find the information as the Ministry of Emergency Situations’ link to this particular page was cached.

­To find a document without the exact address of the place is not possible, so it became clear that our ‘Troyan terrorist’ had access to the appropriate classified Ministry’s files.

Knowing that more than half of the ‘Troy’ terrorist special unit are the Russian citizens, the InformNapalm team started to check those individuals who visited Rostov Oblast and hypothetically could have such access. It took us approximately two weeks and 4000 profiles to be checked but finally we were able to trace a person who could be considered with a high level of probability as one connected to ‘the ultimatum’. 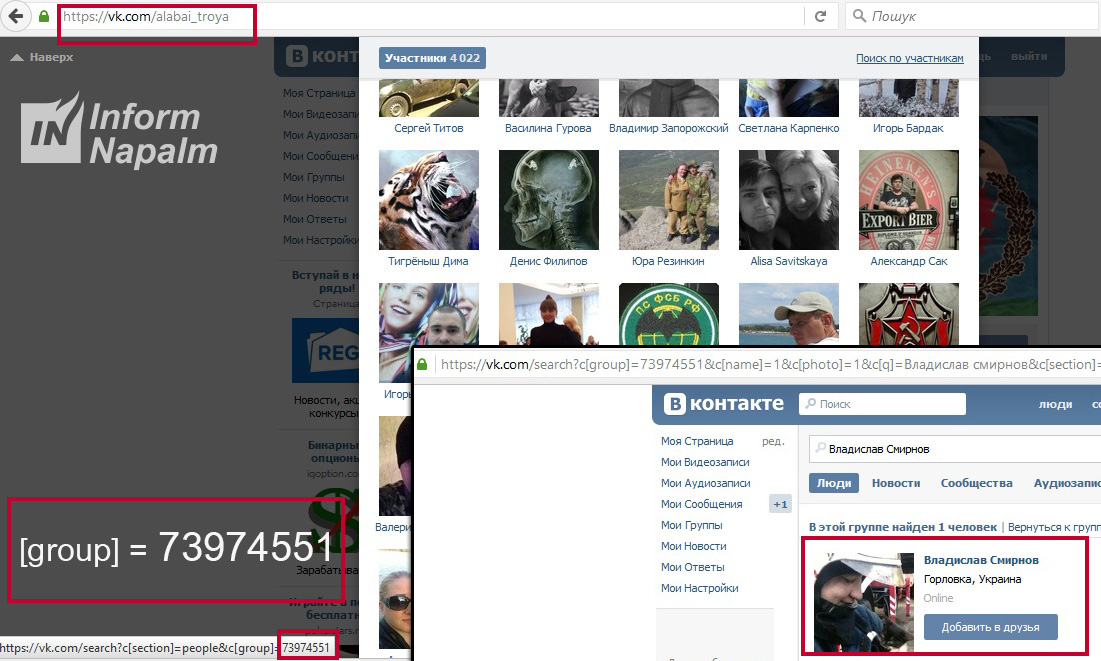 ­He is a former staff member of the Ministry of Emergency Situations in Rostov Oblast Vladislav Smirnov (his profile in VKontakte social network and archive – in case of the page is deleted).

While analyzing his profile we were able to find pictures related to his ‘service’ in the ‘Troy’ unit in Donbas as well as his previous job at the Ministry. There were pictures near the places from the list we were looking for. 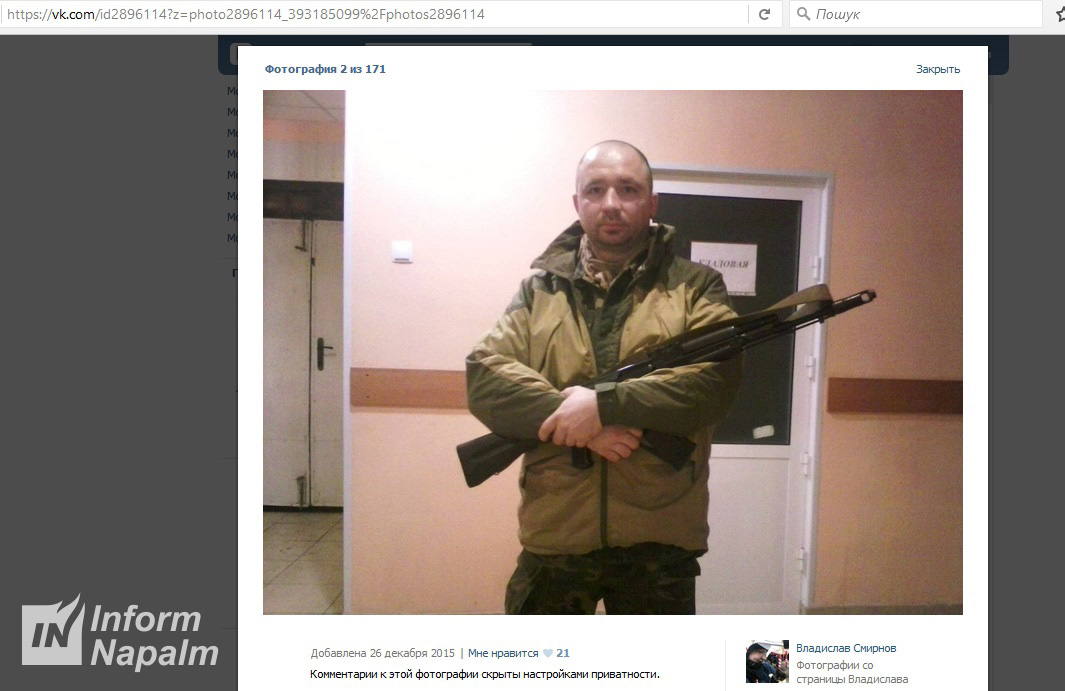 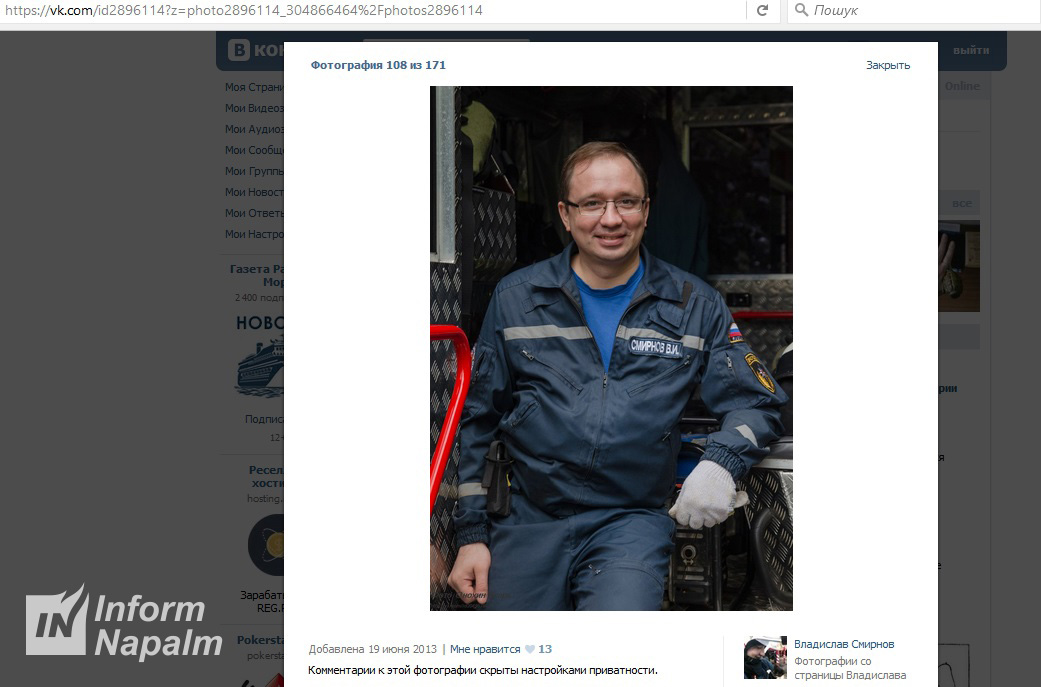 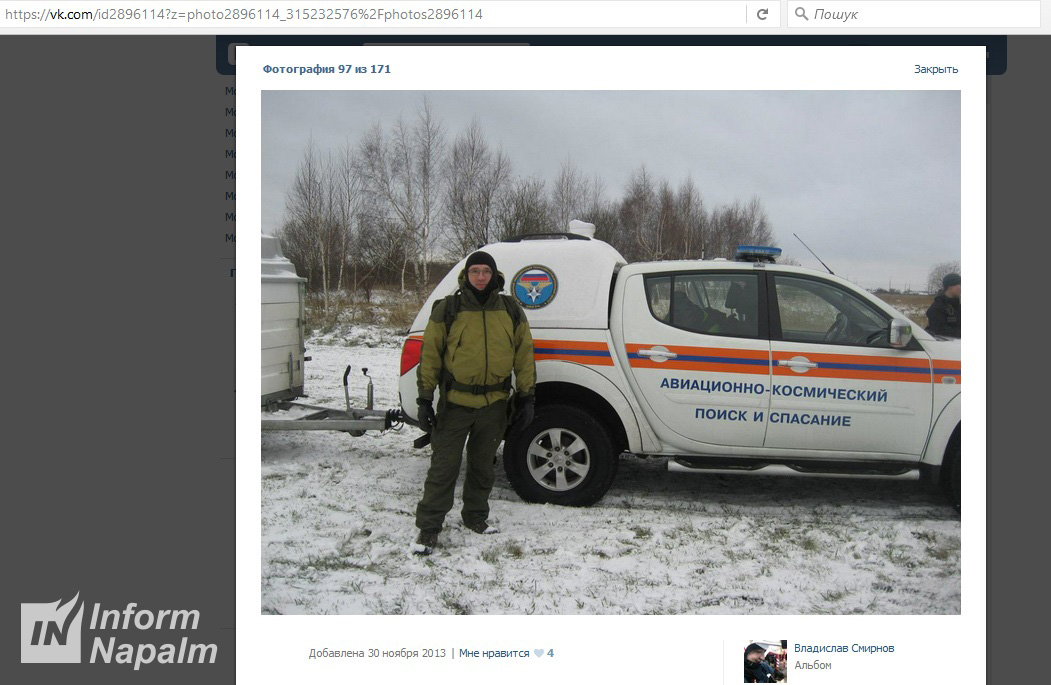 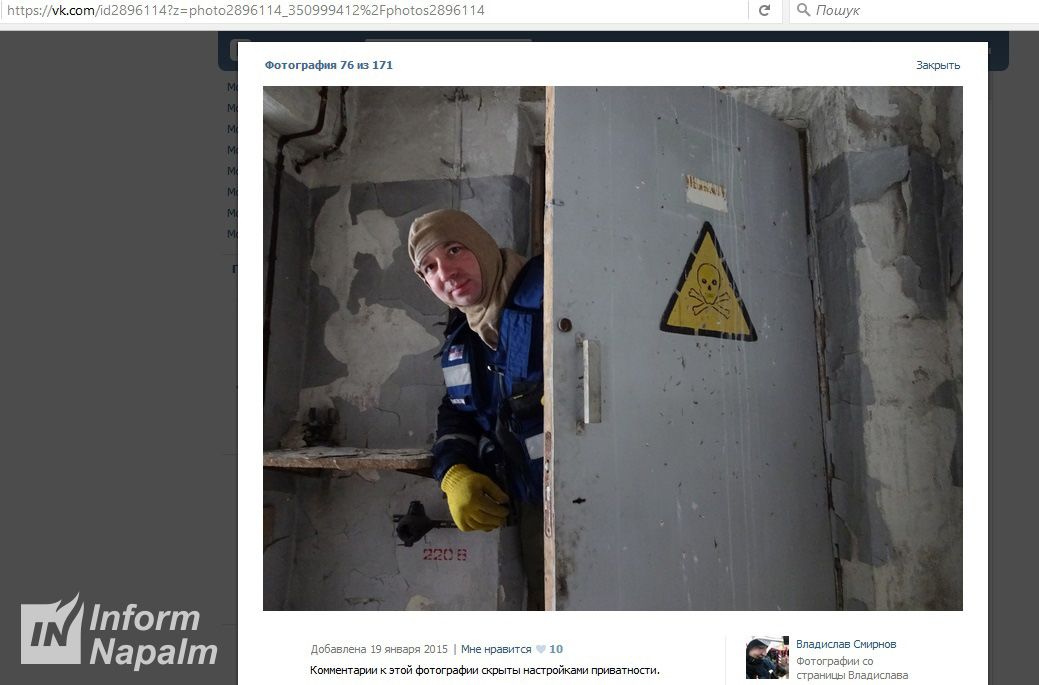 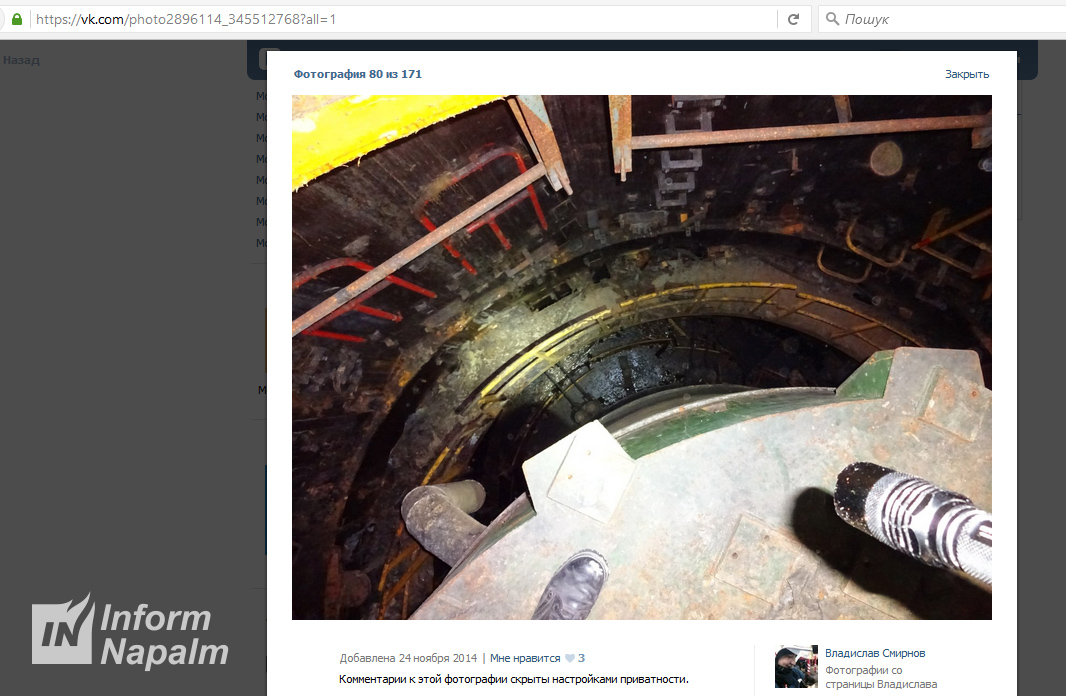 ­On January 29 the InformNapalm’s insiders delivered information about the attack in Ozeryanovka where ‘Troy’ unit is located. This fact was also confirmed by the unit itself through the VKontakte official page as well as the fact of the lost communication with its members.

It is unknown if Vladislav Smirnov was able to fulfill a threat and place explosive devices in Rostov Oblast, but his page was accessible online at the moment of the attack in the evening of January 29. 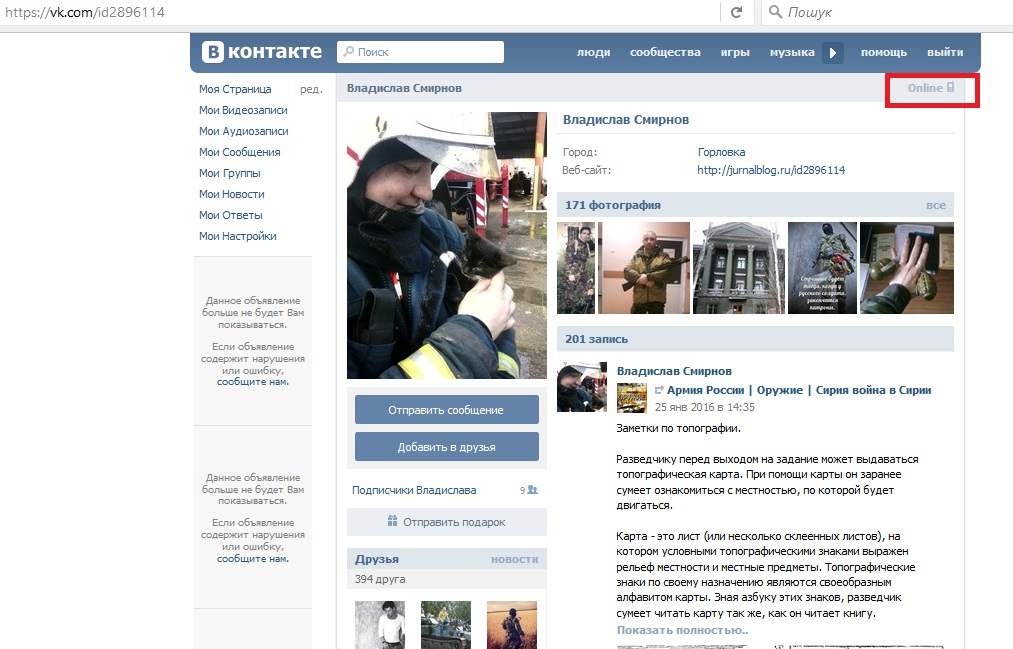 Considering that this person could easily pretend to be the Ministry of the Emergency Situation representative and obtained access to the storehouses with chlorine, fuel or explosive materials, we would like to warn about the possible terrorist attacks those who are in Rostov Oblast including the Russian special forces about the information we were able to obtain.

The InformNapalm team has prepared archives of his profile and if requested additional materials could be presented. To receive the information about the Russian special forces would be required to address the InformNapalm community officially completing a contact form. We need to stop the terrorism of any shape and form!

No Responses to “Identification of the ‘Troy’ Terrorist Is Completed”