Journalist’s testimony about situation in one of Minsk detention centers: They heard that he was from Ukraine; so, they started beating him. 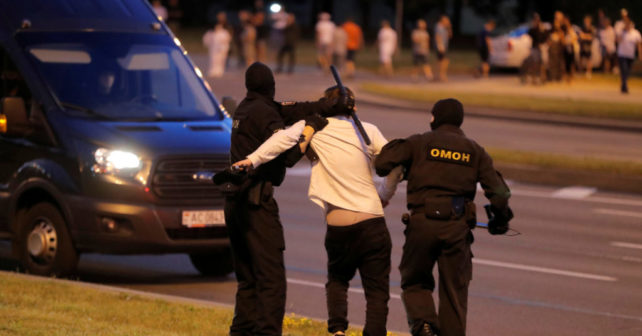 Belarusian security forces brutally beat people in a detention center in Minsk on Okrestina Street, making no exceptions for women, journalists or citizens of other countries.

Journalist Volodymyr Lunev told about it on Belsat TV channel.

Lunev was detained the day before near the Pushkin subway station together with other people and taken to a remand prison located on Okrestsin Street.

“I thought that they would not touch the press. But they beat everyone – women, children and the press. We were taken in paddy wagons, taken, as I understand it, to Okrestin. There was horror. People were methodically beaten so that they would not have any inspiration anymore to participate in the protests. Every half hour, a new group of people was brought in, and we heard them being beaten in the corridor. There was chaos, blood, people screaming in pain and begging them not to beat them, but no one listened to them. “, – informs the journalist.

According to Lunev, people are treated “worse than cattle.” A citizen of Ukraine was especially severely beaten.

“A citizen of Ukraine was with me. As soon as a policeman heard that he was a citizen of Ukraine, they took him and dragged him to the fence and started beating him methodically. To remain unharmed, I did not say where I was from. I didn’t say anything. My jacket had the word “PRESS” on it, but I said I had taken it from someone. I understood that if I talked, I would just be simply killed under this fence. There were no places to hide, as I understood. All the detainees were kept on their feet, upright, from 12 o’clock at night until 12 o’clock at night – 24 hours. The people stood next to each other, and there was no opportunity to sit down. People started to fall down. Some became sick, and folks shouted, “Call an ambulance.” Neither water nor food was given to people, “Lunev added.

On August 9, according to the official exit poll, Alexander Lukashenko, who has ruled the country for 26 years, won the presidential election in Belarus. However, the opposition’s exit polls indicate that Svitlana Tikhanovskaya won by a huge margin. The latter’s husband, Serhiy, was barred from the election and thrown in jail. Mass protests later broke out in Belarus in response to the election results.

On August 11, it became known that Tikhanovskaya had left for Lithuania. Her trusted spokesperson later said that Tikhanovska, allegedly, was thrown out of Belarus by the Belarusian authorities and that her absence in Belarus was a condition to release her chief of staff, Maria Moroz, who had been detained on the eve of the election. In the video, Tikhanovskaya called on the protesters to stop. In Lithuania, Svitlana Tikhanovskaya was granted a place to live and an annual visa.

The foreign ministers of the Nordic and Baltic states addressed the Belarusian authorities with a joined statement, stressing their concern about the physical injuries inflicted on the demonstrators. Belarus has officially acknowledged that security forces fired on protesters. The Ministry of Internal Affairs of Belarus has announced the opening of 17 criminal cases on the facts of attack on law enforcement officers.

No Responses to “Journalist’s testimony about situation in one of Minsk detention centers: They heard that he was from Ukraine; so, they started beating him.”