What will the pro-Russian journalist Andrew Kramer do in Ukraine? 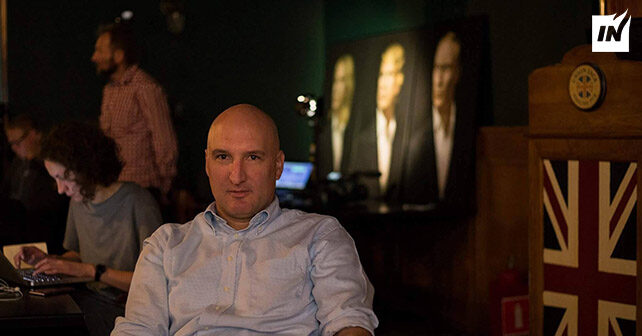 On July 22, 2022, The New York Times announced the opening of its bureau in Kyiv “to keep covering a war that has upended life for millions of Ukrainians and reverberated far beyond the country’s borders. The conflict has left people around the globe at risk of starvation, and has scrambled alliances, undermined efforts to shift to clean energy and challenged an already fragile rules-based world order.”

The newspaper introduced Andrew Kramer as the chief of its new bureau, exalting that “there is no one better suited to lead The Times as we set up a bureau in Kyiv…”

Let’s put aside the praise lavished on him in the press release and turn to some facts and episodes about Andrew Kramer that matter to the Ukrainians. Let’s look at the reasons why he does not enjoy the reputation of an independent and objective journalist in Ukraine, the country that has been a victim of the Russian aggression for years.
Andrew Kramer has lived and worked in Russia for over 10 years. He worked in the Moscow bureau of The New York Times. He is married to a Russian journalist Anna Nemtsova (no relation to Boris Nemtsov killed by the Kremlin).

There are clear indications that he was involved in the information and psychological operations of the Russians and had an active role in spreading some of Kremlin’s narratives.

In early May 2016, Myrotvorets Center made public the lists of journalists who received accreditation from the occupation authorities that controlled parts of Luhansk and Donetsk Oblasts. Andrew Kramer was one of them. He made the following comment about the fact: “…powerful people in Ukraine, a democracy that aspires to the free flow of information, were going after me and others on the list for simply doing our jobs: reporting both sides of the war […] The list, published by a Ukrainian nationalist website called Myrotvorets, or the Peacemaker, appeared to have been born out of a simmering frustration.”

“Nationalist website” is a very familiar wording used by the Kremlin.

Speaking of “nationalists”. Some readers may know the name of the civil activist Yuriy Hudymenko, who was recently gravely wounded in action on the front line defending Ukrainian land and citizens from the Russian aggression in the ranks of the Armed Forces of Ukraine. (We wish a speedy recovery to our defender.) It was Hudymenko who was mentioned in Kramer’s article on the eve of the large-scale stage of the Russian military aggression against Ukraine. The article appeared on February 10 under the deceitful title “Armed Nationalists in Ukraine Pose a Threat Not Just to Russia.” 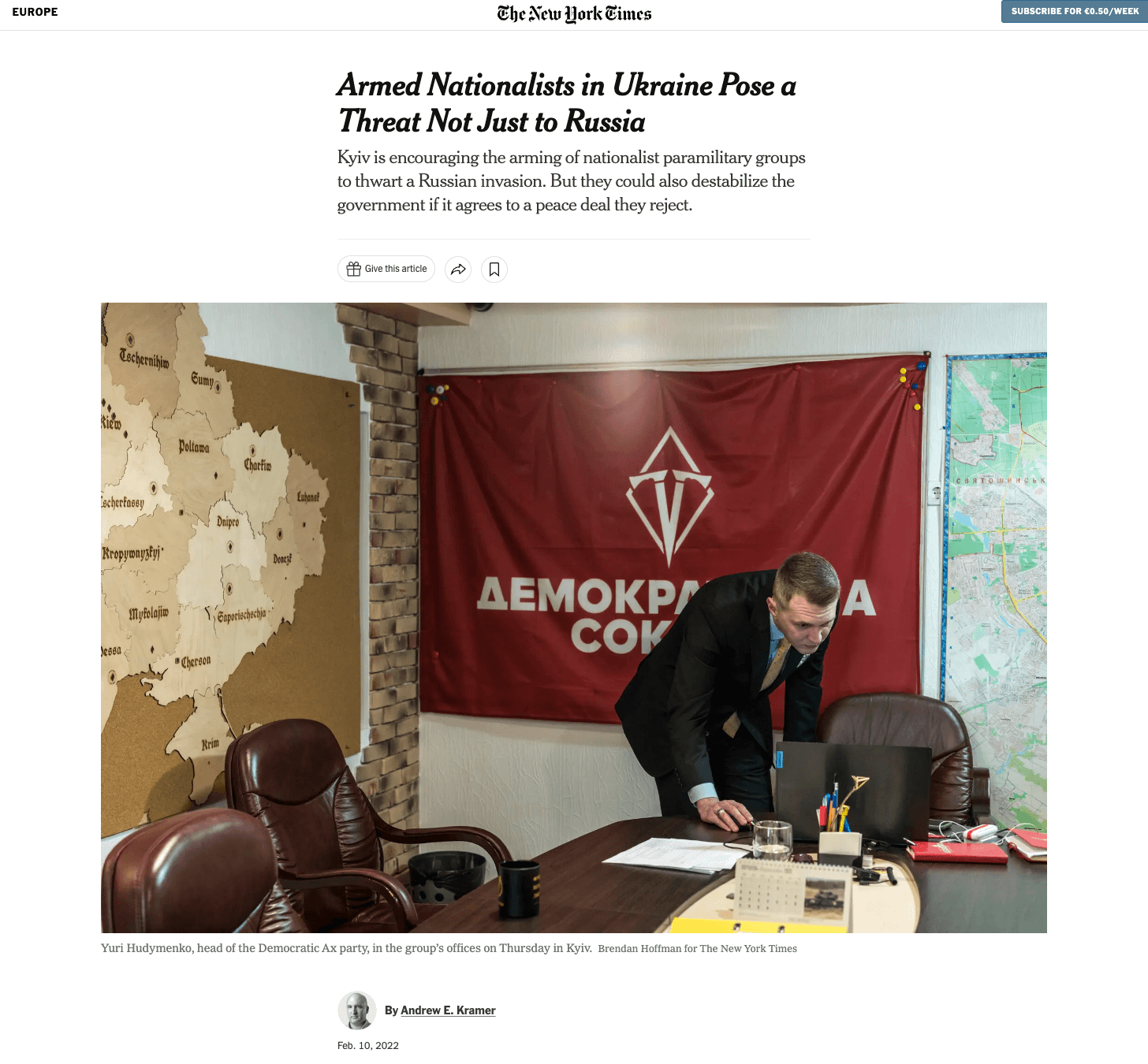 And in the midst of the pandemic and a massive Kremlin disinformation campaign about the poor efficacy and safety of Western vaccines, he joined the media promotion campaign for the Sputnik-V vaccine, an insufficiently researched drug falling far short of the international quality standards (Russia did not conduct standard clinical trials, and the data provided had clear signs of falsification).

There were several articles under his authorship:

Decades-Old Soviet Studies Hint at Coronavirus Strategy, A married pair of virologists in Moscow tested a vaccine on their own children in the 1950s. Now, a side effect they found, is sparking new hope for a defense against the Coronavirus. (Published June 24, 2020Updated June 25, 2020)

In a piece with such a peremptory title, the author refers to The Lancet journal. The journal was frequently cited in Russia during the pandemic, its articles covered not only the coronavirus, but also the Sputnik V vaccine and the poisoning of Navalny.

Later, however, the same journal published an article by a group of epidemiologists and biologists from different countries questioning the available data on phase III trials of Sputnik V and the conclusions drawn from them about the efficacy and safety of the vaccine.

It was reported by Radio Liberty. “In an open letter published by The Lancet, scientists, including a Russian specialist, analyzed the data on trials of the Russian vaccine published earlier in the same journal. Its developer, the Gamaleya Research Centre, claimed that the efficacy of Sputnik exceeded 91 percent, based on these trials.”

“The authors of the critical piece, after analyzing the arguments of the developers of the vaccine, write about the many inconsistencies in the data presented, a number of unusual and suspicious coincidences (in particular, the vaccine, according to the official data, showing almost the same efficacy for all age groups. They mathematically showed that the same efficacy of the vaccine claimed for different age groups casts doubt on the authenticity of the data presented and may indicate falsification), the lack of transparency in phase III of the Sputnik V trials and clear rules for its conduct. The main source of their concern, however, is that a range of vital trial data have not been published, without which, according to the authors, it is impossible to objectively evaluate the results.”

“The piece in The Lancet medical journal has become one of the arguments for both Russian authorities and politicians from a number of countries around the world, including the EU, to declare the Russian drug reliable. Contracts for its supply have been made with dozens of countries, although so far, unlike six other vaccines, it has not been officially approved by the WHO.”

This was also facilitated by an article by Andrew Kramer that had global reach by the virtue of being published in The New York Times.

And as a cherry on top of the Kremlin’s promotion of Sputnik-V, came an article by Andrew Kramer, which was subsequently used left, right, and center to promote the vaccine in different countries. The article was mentioned and cited by the Kremlin media around the world. That specific report covered the fact that an American journalist took Sputnik-V in Moscow.

That journalist was Andrew Kramer. After vaccination, he became a frequent guest on the air of Russian and Western media, where he promoted narratives like this: “the politicized rollout only served to obscure the essentially good trial results — what appears to be a bona fide accomplishment for Russian scientists continuing a long and storied practice of vaccine development. In the Soviet period, tamping down infectious diseases was a public health priority at home and exporting vaccines to the developing world an element of Cold War diplomacy.” 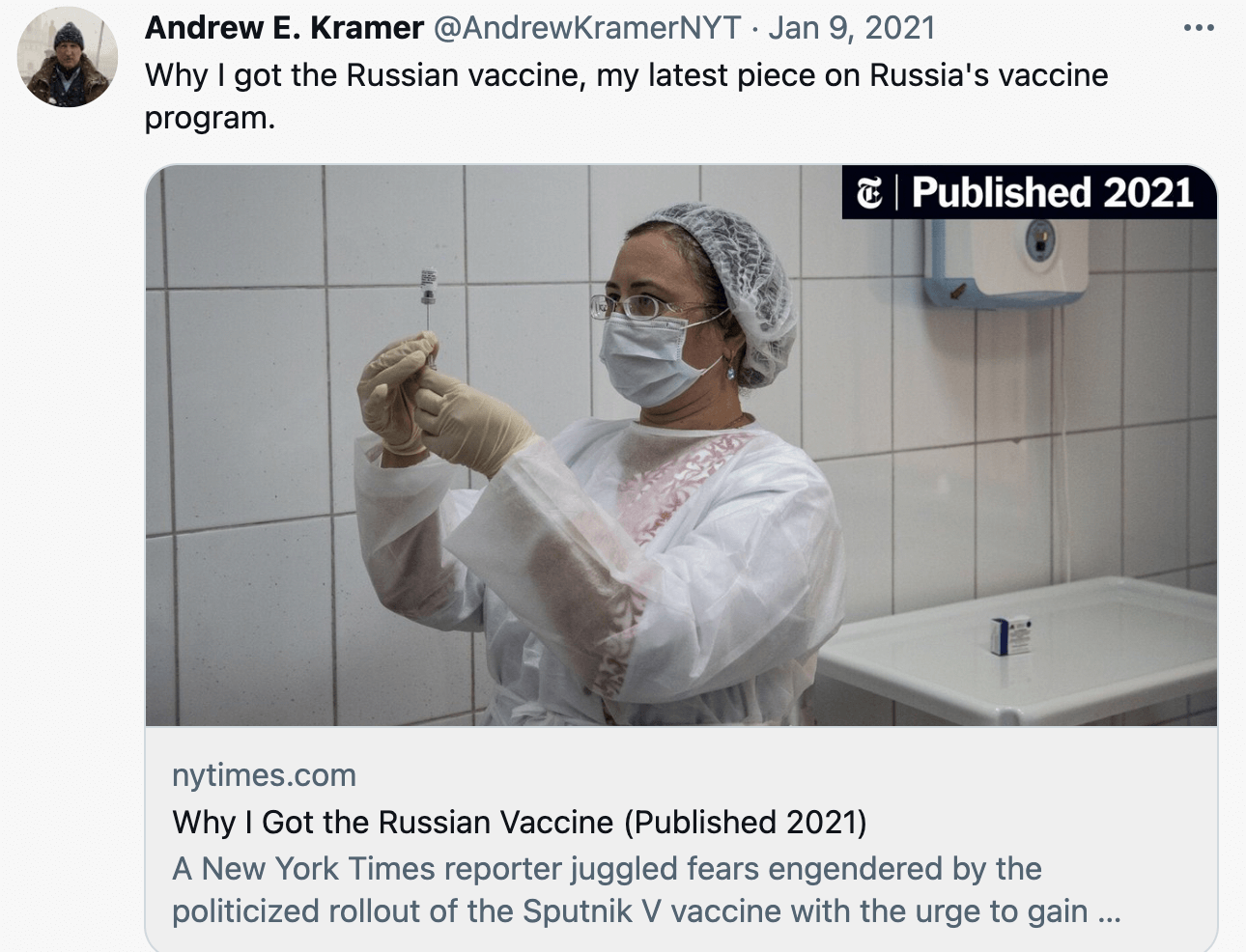 Kramer’s visit to Yakutia is also telling. In his words, “Shoppers want to know… where the jewels on their engagement rings are dug up…“, so he authored a feature looking like nothing short of an advertorial in the interests of the Russian corporation Alrosa and its products in an American newspaper that is read around the world.

Alrosa mines 95% of all diamonds in Russia, one of the top diamond-selling countries. The assessed reserves of Alrosa make up to 1/3 of the world’s diamond reserves.
In April 2022, due to Russia’s open military aggression against Ukraine, Alrosa came under US sanctions, and European jewelry brands Cartier, Tiffany, Van Cleef & Arpels, Boucheron, Piaget, Jaeger-LeCoultre, Pomellato, DoDo, Qeelin dropped Russian diamonds.

Back then, Kramer even made time to attend a broadcast by the local Yakutian radio station, Almazny Krai. 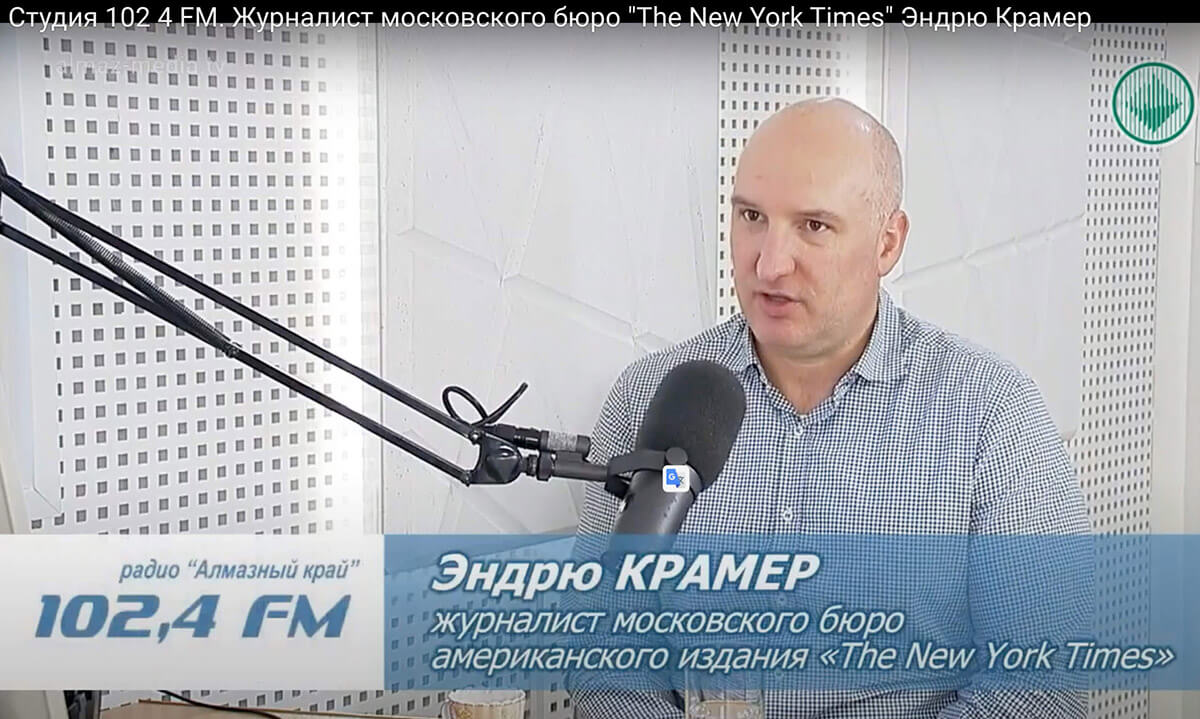 And here is an interesting manipulative speculation made by MK.ru about President Zelensky on the eve of the large-scale Russian invasion of Ukraine based on a line in the original piece.

We see that Andrew Kramer periodically and systematically weaves in Kremlin’s narratives and talking points into his writing. These “strange coincidences” are so numerous that we could only fit just a few of them in this brief review of an American journalist and Kremlin’s fellow traveler.

However, we have at least two other concerns. First, given Kramer’s record and background (including many years of work in Moscow), how could Andrew Kramer have been accredited to visit the front lines and positions of the Ukrainian military, where a member of Ukrainian parliament Mariana Bezuhla gave him a tour of strategically important defense positions? 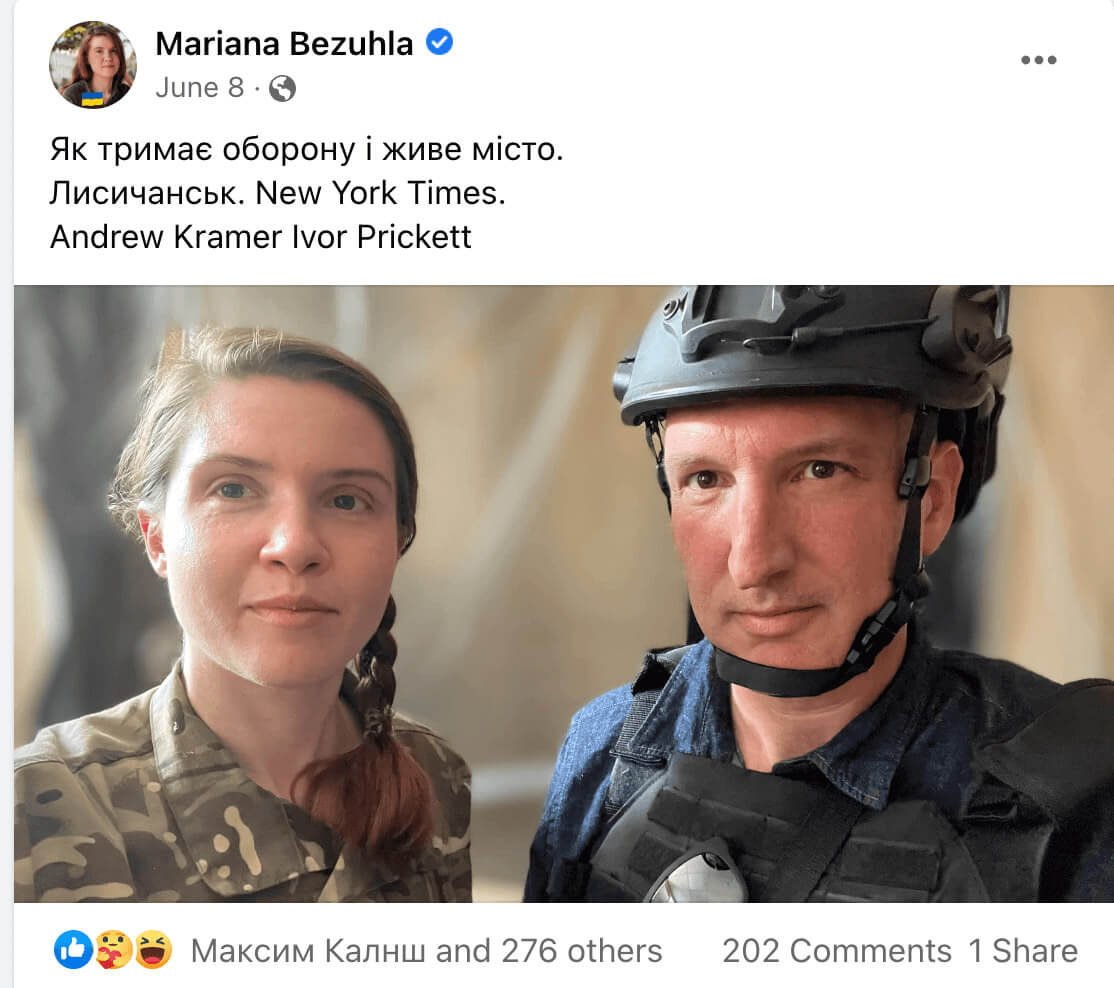 And the second very important question is how can Andrew Kramer lead the Kyiv bureau of the globally renowned The New York Times? After all, the world is interested in objective and honest journalism. And for us, Ukrainians, it is extremely important to save the lives of our citizens, to defend our independence within our internationally recognized borders. And in Kyiv, giving media ammunition to the Kremlin will not work the way it did in Moscow!

By Andriy Weiss specially for InformNapalm.

No Responses to “What will the pro-Russian journalist Andrew Kramer do in Ukraine?”