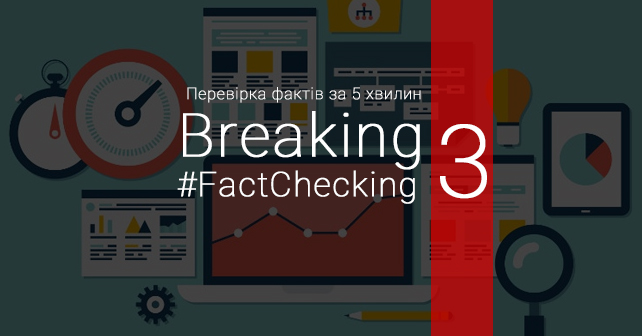 On December 1, another information warfare operation has been launched on the Russian social networks, blogs and in the media aimed to intimidate and frighten the population of the occupied parts of Donetsk and Luhansk Oblasts of Ukraine and discredit the Armed Forces of Ukraine. The operation continues to this day. All major websites and information resources of the pro-Russian militants have joined in, coordinating their actions with the Russian media.

On December 2, InformNapalm volunteers conducted an analysis of the information component of this operation. We established how the information was spread on the web, who was at its source, and which major Russian media were involved in the first stage of its dissemination.

On top of the information component of the fake, we now look into the staged photos of the A1ZhD propaganda projectile used in the story.

Why are the photos of the A1ZhD projectile staged?

We found four photos, which are used by the militants as the “evidence”. They show a projectile fired by 122-mm D-30 and Gvozdika guns to disperse leaflets on the enemy-held territory. For convenience, we combined these photos into one block. 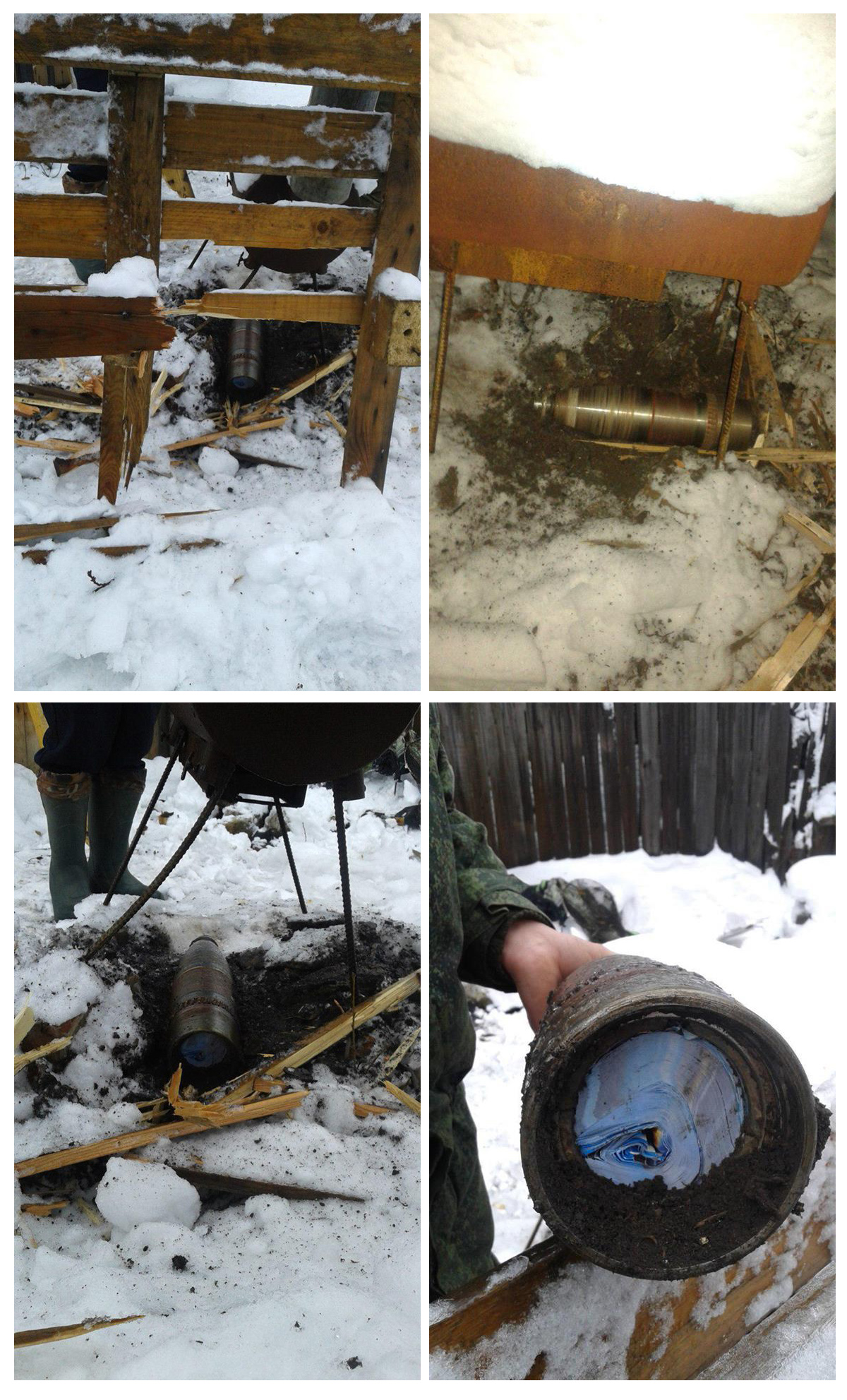 There are a few details worth noting: the bottom plug is missing, the hole in the dirt is too shallow, the leaflets are in a tight unbalanced roll. All these factors indicate that the A1ZhD projectile could not have flown in like this – it was packed especially for the staged photo-shoot.

In Donbas, both sides of the conflict – the Armed Forces of Ukraine, and the Russian hybrid army – are using such propaganda projectiles to drop leaflets over the line of conact.

For example, on February 15, 2015, News-Front, a Russian propaganda channel, demonstrated a video in which a masked man in a clearly Russian accent talks in detail about the preparation of such shells for spreading leaflets over the town of Debaltseve. Note the rear plug, peculiar spreading method for rolling up of the leaflets and the remark that such a shell could “split a house”.

Theory and practice. The devil is in the detail.

The photos show the projectile lying in a small slightly dug up pothole, although its power on impact with its weight of 20 kg is enough to burrow it about 1.5 meters deep into the ground. So a broken fence board and some loosened ground make for a lame imitation of the landing scene for an unexploded projectile of this type.

Photos of a projectile on the ground with leaflets visible inside, even before the man in Russian camouflage picks it up, also looks implausible. The projectile which allegedly did not go off in the air is missing a rear cover plug, which was supposed to be screwed in before firing. Without that plug, the leaflets would have instantly burnt out in the gun barrel at the moment of firing. 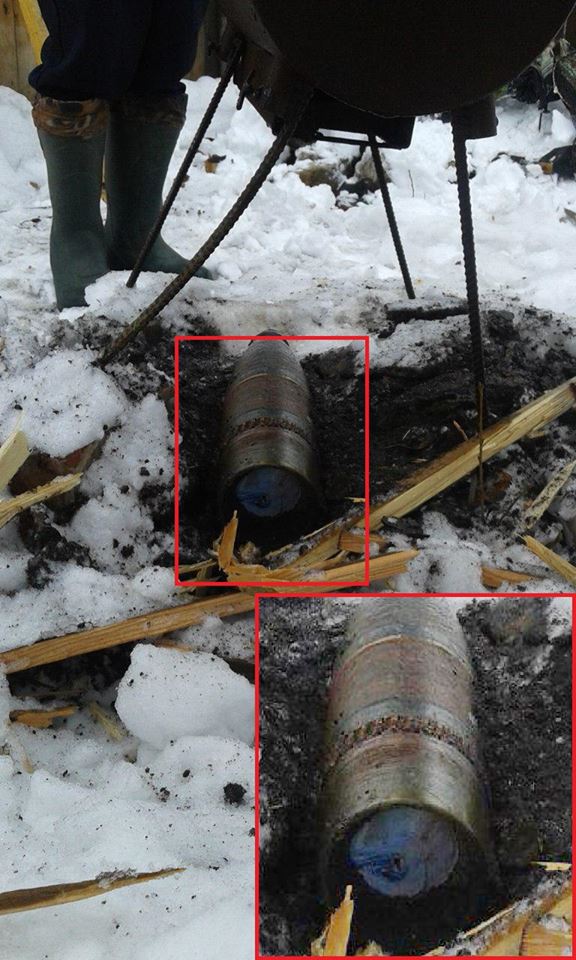 Here are some examples of equipped propaganda projectiles. 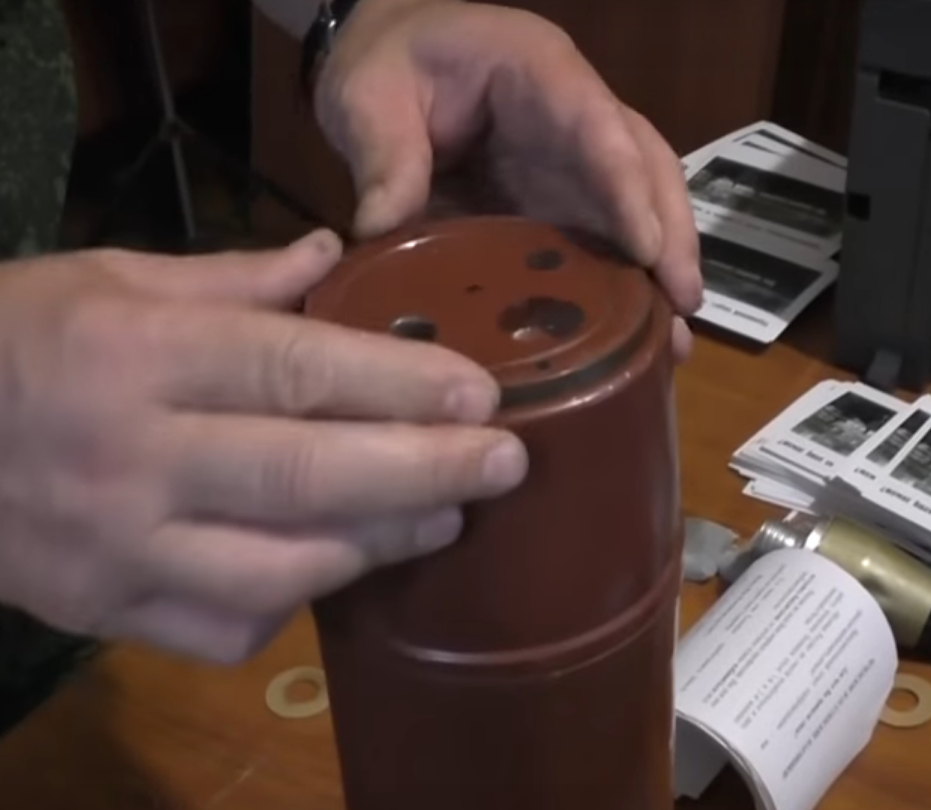 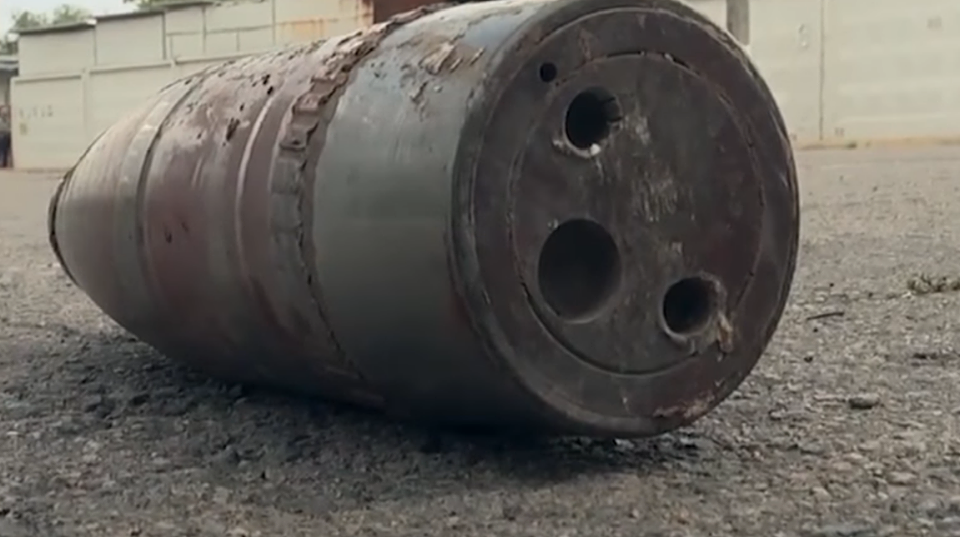 Here is a schematic depiction of the operating principle of the propaganda shell: a closed projectile is fired by an artillery piece, on the decent trajectory its content is blown out by a burster charge. 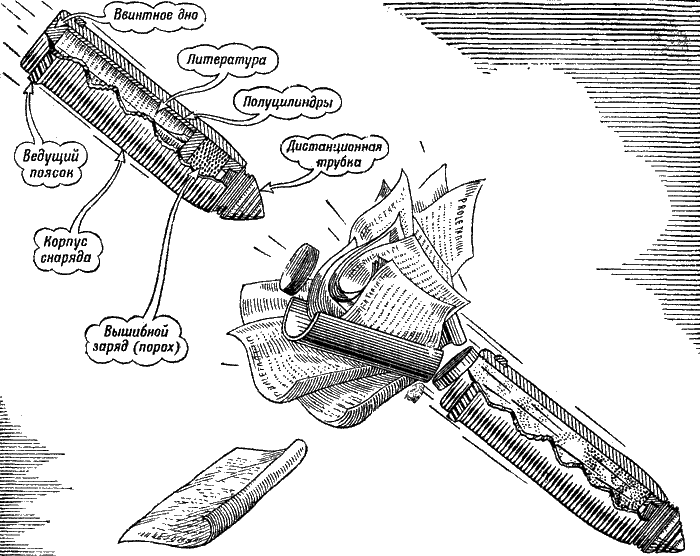 The pictures of the “Ukrainian propaganda shell that did not go off” are clearly a fake. Its goal is to make a news story about the leaflets filled with hate language and featuring a Nazi-like character. The leaflet says “We do not need people. We need the territory. Flee for your life. Greetings from the Right Sector. We will come soon to butcher your wives and children. You will meet the new year either in the grave or in prison.” However preposterous, this Russian fake is far from harmless. Its ultimate objective is to intimidate the population of the occupied territories of Ukraine, sow mistrust, fear and hatred towards the Armed Forces of Ukraine. 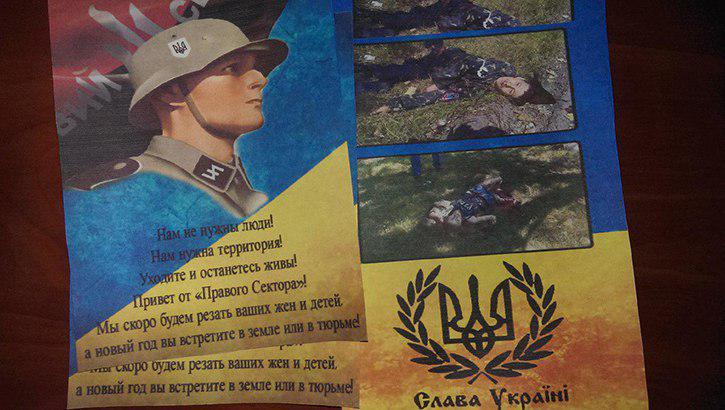 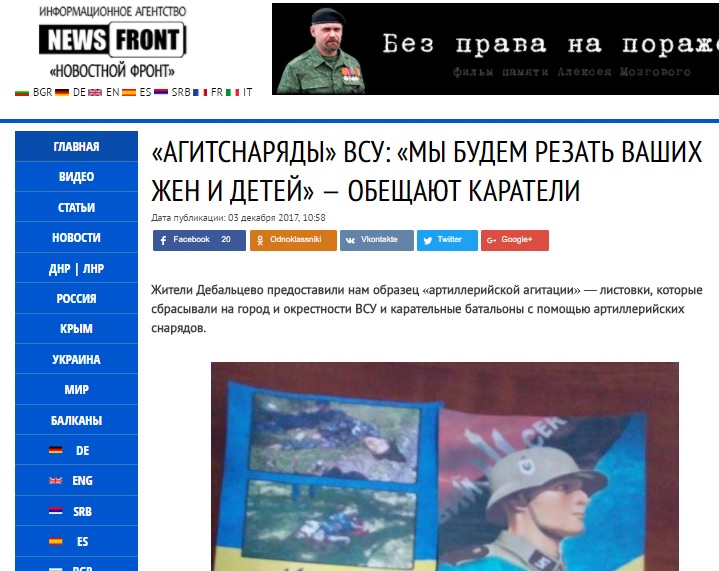 This false flag operation follows in the footsteps of the “crucified boy” and dozens of other outlandish spins of the Russian media that turned out to be surprisingly effective. Russian propaganda effort appealing to these dark emotions made numerous Ukrainian and Russian citizens cooperate with the militants or join the ranks of the Russian hybrid forces bringing terror and destruction to Donetsk and Luhansk Oblasts of Ukraine.

The analysis was prepared by Kuzma Tutov and Roman Burko especially for InformNapalm. Distribution and reprint with reference to the source is welcome!
(Creative Commons — Attribution 4.0 International — CC BY 4.0)