Militants Made a Video Tutorial About Firing Modern ‘9М113М’ Missiles 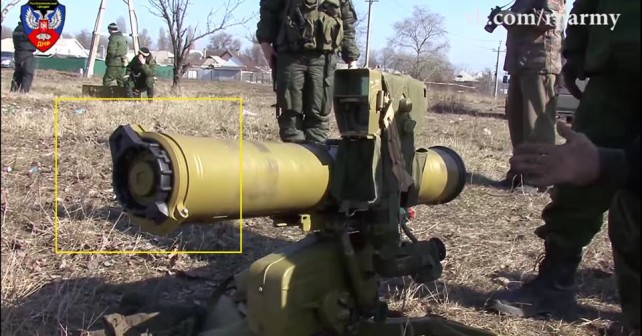 Another interesting video was posted on the ‘Republic Guards of DNR‘ channel by the ‘Kamius’ brigade militants on March, 22, 2015. Analysis of this video tutorial results in capturing the following information:

Video with the facts fixation:

As a result, the video shows a modernized ‘9K111’ Fagot wire-guided anti-tank missile system (NATO: AT-4 Spigot) with the ‘9P135M-1’ launcher (which can cope with ‘9M111’, ‘9M111M’, ‘9M113’, ‘9M113M’ missiles). In the video the ‘9M113M’ missile is installed. Also you can see that the marking on the missile has been intentionally removed, but instructor told the working distance of the missile which distinguishes it from the older modifications. Also the container cover is displayed – it is used only with the ‘9M113M’ missiles. The bits of evidence fit together like pieces of a jigsaw puzzle – the full identification of the weapon is completed.

This type of missiles is made by Tula Arms Plant (Russian Federation). The production of such missile systems is also licensed to India and Iran. Another case of the illegal usage of this system was documented in Syria in 2013. Apparently, the complexes were there ‘on vacation’ as well.