The mission of Russian special operations troops in Egypt 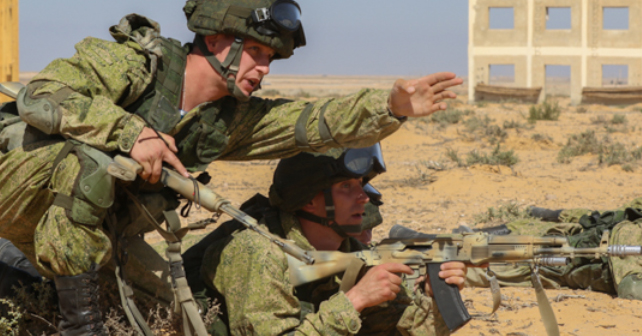 The joint Russian-Egyptian military exercises that started Oct. 15 in Egypt include participants from the Airborne Troops and Special Operations Forces of Russia (SSO). The IMINT analysis of photo and video footage taken at the training location provides a variety of evidence.

The Russian troops were deployed by five IL-76MD aircraft from Dyagilevo (Ryazan Oblast) to Alexandria (Borg Al Arab). According to the official report, about 250 servicemen from the Airborne Troops and Special Operations Forces are engaged in the training, equipped with BMD-2 airborne assault vehicles (6 units equipped with landing systems), BTR-D armored vehicle, tented truck and other special-purpose vehicles, including airdrop capable all-terrain vehicles.

The types of vehicles captured on the photos have different features than the Tulchanka vehicle previously purchased by Russian Airborne Troops. Most likely these are Stels Guepard or Yamaha Grizzly 700 vehicles, purchased for the military unit 92154 Senezh (SSO).

The majority of Russian servicemen in Egypt do not have insignia on their uniforms, as can be seen in the video footage taken at al-Umaed (location of joint day and night-time firing exercises) and Alam al-Hadem military bases.

However, the footage from the Russian Ministry of Defence shows a colonel with insignia of special operations troops on his sleeve. 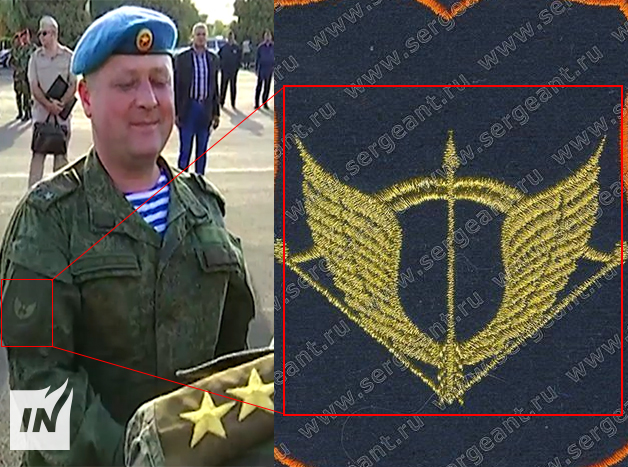 Other images posted by the Ministry of Defence, demonstrate that Russian troops participate in the capacity of course leaders and instructors, as evident from identification on their sleeves. 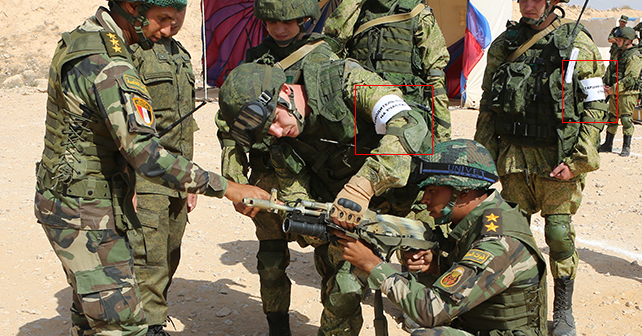 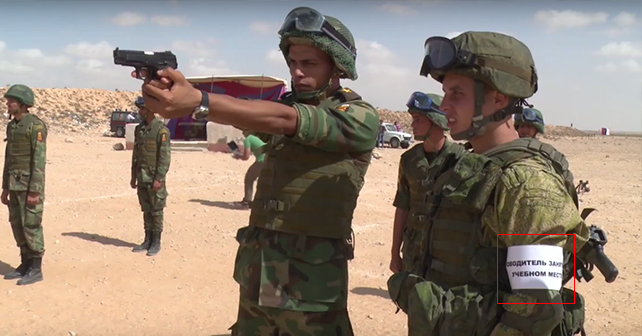 This is also confirmed by the commands given by the instructors first in their native language, followed by the translation to Arabic.

The IMINT data provides evidence that Egyptian servicemen demonstrate to their Russian colleagues the firearms of American and Belgian manufacture used in the Armed Forces of Egypt. 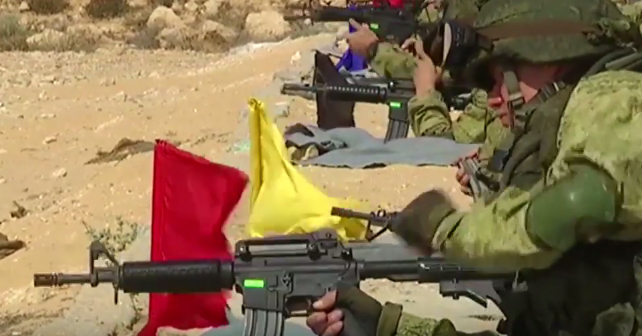 Some features of the training grounds reveal a specific emphasis – training for combat operations in the urban setting. In a video, Russian servicemen demonstrate engagement in the urban combat.

The status of Russian troops may extend beyond participation in the military exercise. This is suggested in the video by the reference to ‘members of coalition troops’, and ‘Russian contingent’ mentioned in the report upon arrival at the airfield. A possible reason for engaging the special operations troops could be military assistance offered in accordance with the troops’ main purpose. According to the general concept of Russian Special Forces, the missions of special operations teams can be supported by airborne units and GRU Spetsnaz. Therefore, the composition of the Russian group in Egypt could be viewed as a Special Operations Forces team with an attached Airborne unit.

Many details suggest that the task of the Russian group is to perform evaluation of joint capacity and coordinated activity during operations. Moreover, the analysis of video footage suggests that Russian troops transfer the urban combat skills to their counterparts.

From the Egyptian side, the participants include only the parachute troops. This suggests preparations for tactical operations with air deployment of airborne units in compact company and battalion tactical groups. In practical exercises, special emphasis is given to parachute jumps from the altitudes of 2000, 6000 and 7000 feet, using the parachute systems such as D-10, T-10V, Arbalet and MS-5. The jump exercises were performed from IL-76MD aircraft of the Russian Air Forces, C-130 and CASA of the Egyptian Armed Forces, landing on the unfamiliar target, called Tallet, in the desert location with sand dunes up to 1.5 m high. These types of parachute systems are used by special operations troops to land on unprepared surfaces in adverse weather conditions at low altitudes.

The activities in Egypt provide an opportunity to practice coordinated action between Russian special operations teams jointly with airborne troops on the one hand, and parachute troops of Egypt on the other hand, in blocking and destroying militant groups in desert conditions, using rapid air deployment of battalion tactical groups.

The goal of this type of operation could be the elimination of terrorist cells located on the Sinai Peninsula that resumed their activities on October 14. The possibility of launching a joint operation in Lybia remains open, however, it is unlikely to happen while the government forces are carring out their offensive campaign in Sirt. The priority focus on Sinai is Muslim Brotherhood cells, further in order of importance come Al-Qaeda and ISIS.

The preparatory exercises for the joint operation occur in the same period as the Cairo visit of the head of Syrian National Security Bureau Ali al-Mamlouk, and his meeting with Egyptian intelligence chief Khaled Fawzy. There are reasons to believe that the meeting agenda, as well as the visit of six unspecified officials from Syria to Cairo on October 16, are both related to the growing tension between Egypt and Saudi Arabia, due to the differences that emerged at the UN resolution voting on Aleppo. During the procedure, Cairo cast its vote in support of the Russian version of the resolution.

Despite the fact that preparation for the joint training was planned for the first half of the year, political signs of strengthening relations between Cairo and Kremlin started to show only in the last three months. This suggests that the Kremlin set out on a mission to reinforce its position in the region by conducting joint military campaigns aimed at supressing opposition forces to the established regimes. It is evident that Russia is engaged in creating the foundation for the development of counter-terrorist coalition, managed by the Kremlin in order to counterbalance the US-led coalition in the region.

Anatolii Baronin, the analysis has been prepared specially for InformNapalm, an active link to the original publication is obligatory for any reprint or further public use of the material.