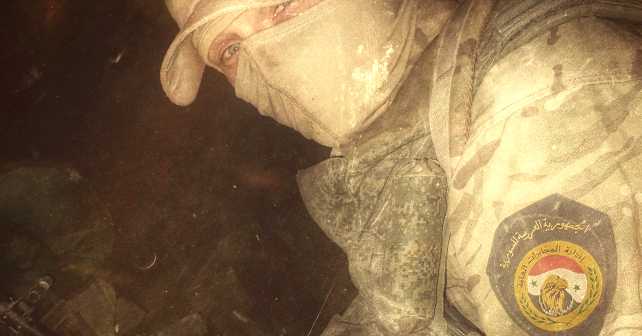 The Russian serviceman Kiril Shadrin was in such a rush to cover up the traces of his participation in the war in Ukraine and special operations conducted in Syria, that he managed to stumble right into an InformNapalm investigation. In 2016, the soldier’s presence in the Donbas was established through a photo geotagged in the Ilovaisk area. Now he is making selfies in Syria as a serviceman of the Russian Special Operations Forces; his uniform, formerly adorned with patches of Novorossia and the stripes of St. George ribbon, now has insignia with Arabic writing. This confirms numerous reports of the deployment of Russian servicemen from the Donbas to Syria. The Middle East is becoming a new site for the implementation of the ‘Russian world’.

The team at InformNapalm monitored the social media profile of Kiril Shadrin, at VKontakte: https://vk.com/id14969194, over a period of time. However, it contained no interesting data, until the moment when the owner decided to hide his information, apparently in a rush.  During a check-up of the page, we found Shadrin changed his profile name to ‘Andrei Dobrykh’, specified Kazan as his city, and cleaned up his profile information.

We will describe the exact steps for recovering the original information that the Russian serviceman attempted to hide.

The we pulled the extended profile information from the VK page before its owner edited and deleted parts of the content. 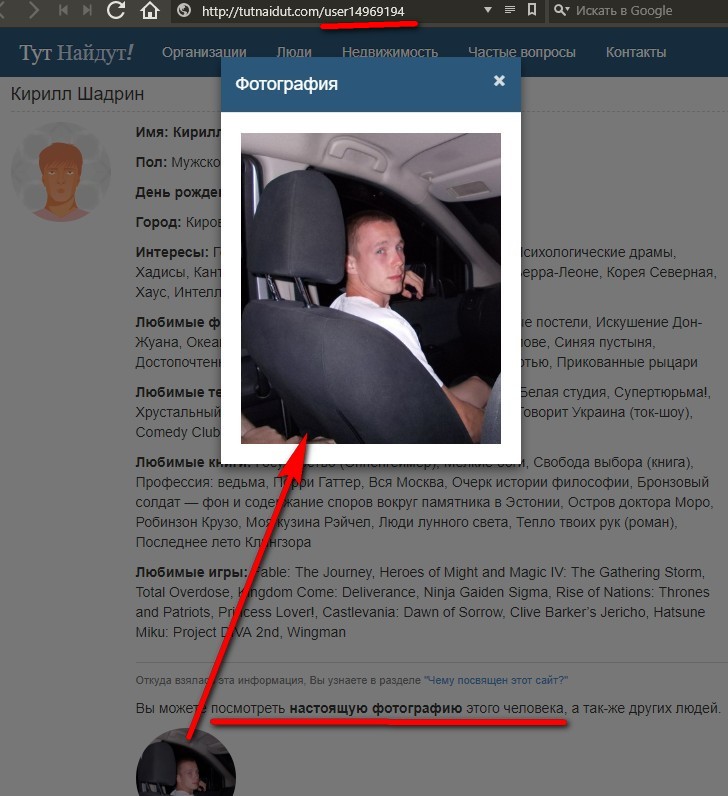 We found full-size uncut photo of Shadrin from 2013 through the website called Tut Naidut (Found Here) (see the screenshot above). 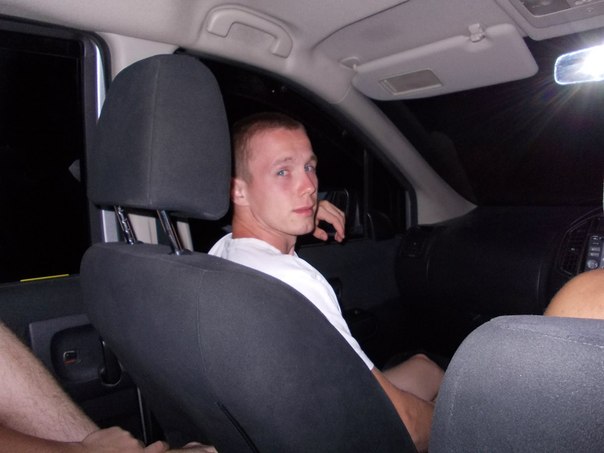 We established that Kiril Shadrin was born on July 17, 1991 in the town of Kirov. The search at Myrotvorets website provided the record of a Russian contract serviceman with the fully matching name, date and place of birth, though it doesn’t have a photo.

Earlier, while monitoring the profile, we saved Shadrin’s photo album that shows him with Syrian patches in the latest photos, while those dated 2015-2016 show his stay in the occupied Donbas in Ukraine.

Service in the Russian army

The photo posted July 14, 2015, with Shadrin holding a weapon, wearing irregular military uniform, with Russian Army trucks in the background, suggests that he likely stayed at the field training camp in Rostov region before his deployment to the Donbas. 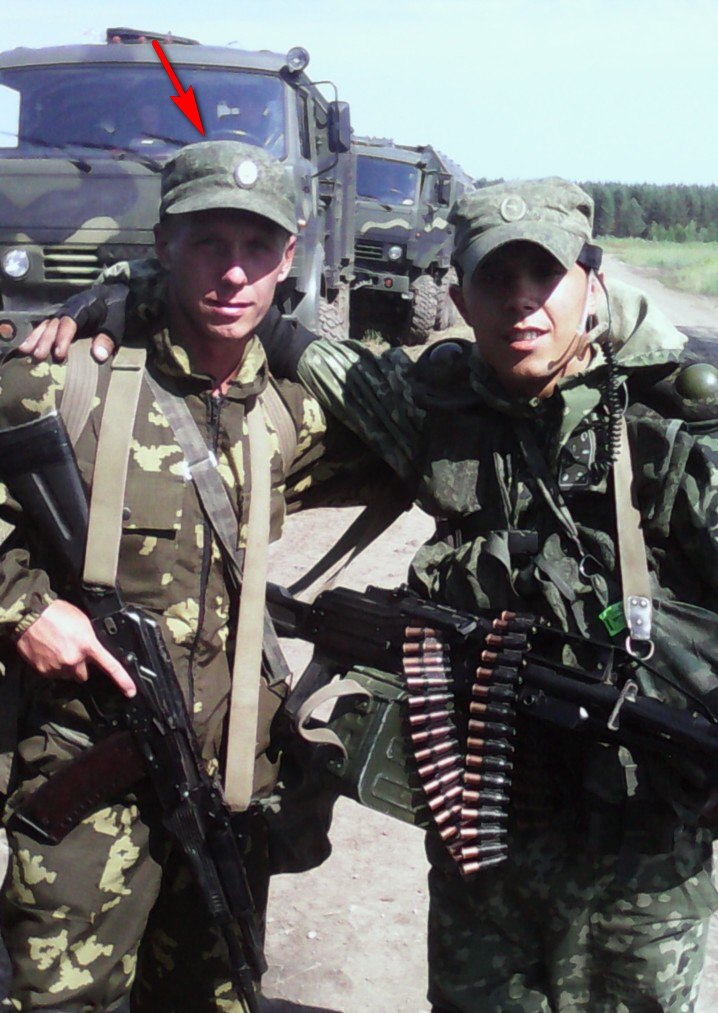 In the photo dated May 09, 2016, Shadrin is seen wearing regular military uniform of the Russian Army, with a patch depicting a bat – sign of recon troops. 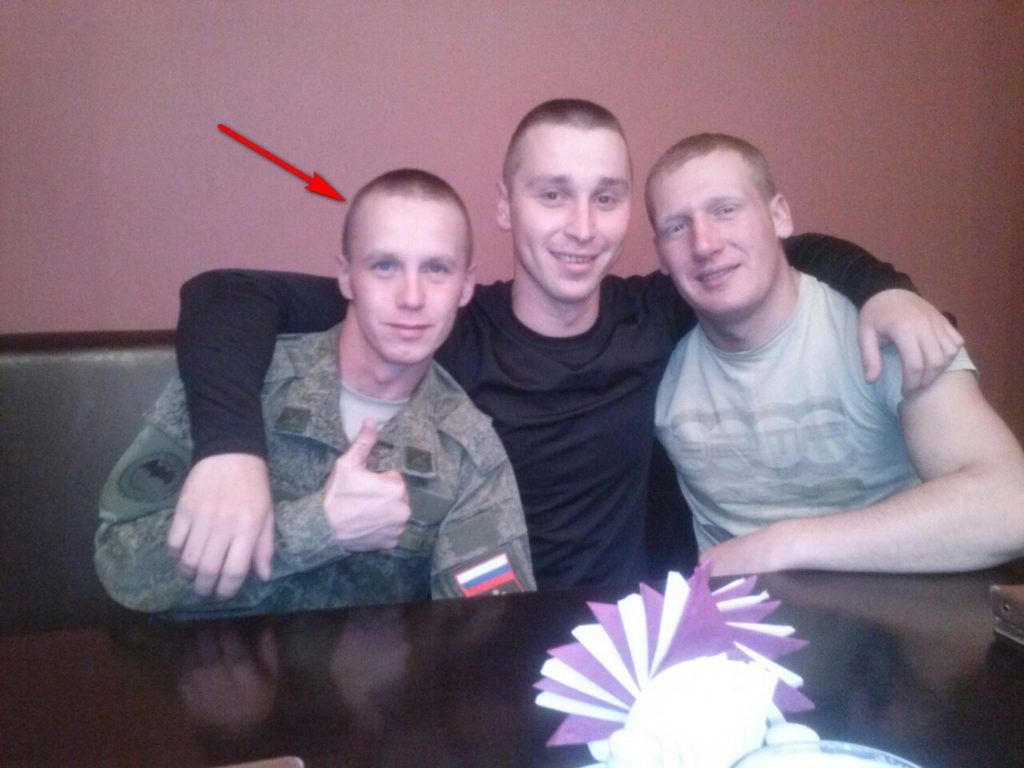 The photo posted on Dec. 03, 2015 was taken in the apartment possibly in the Donbas. A banner of the so-called Novorossia covers the wall. The assumed location in the Donbas is confirmed by the following photos. 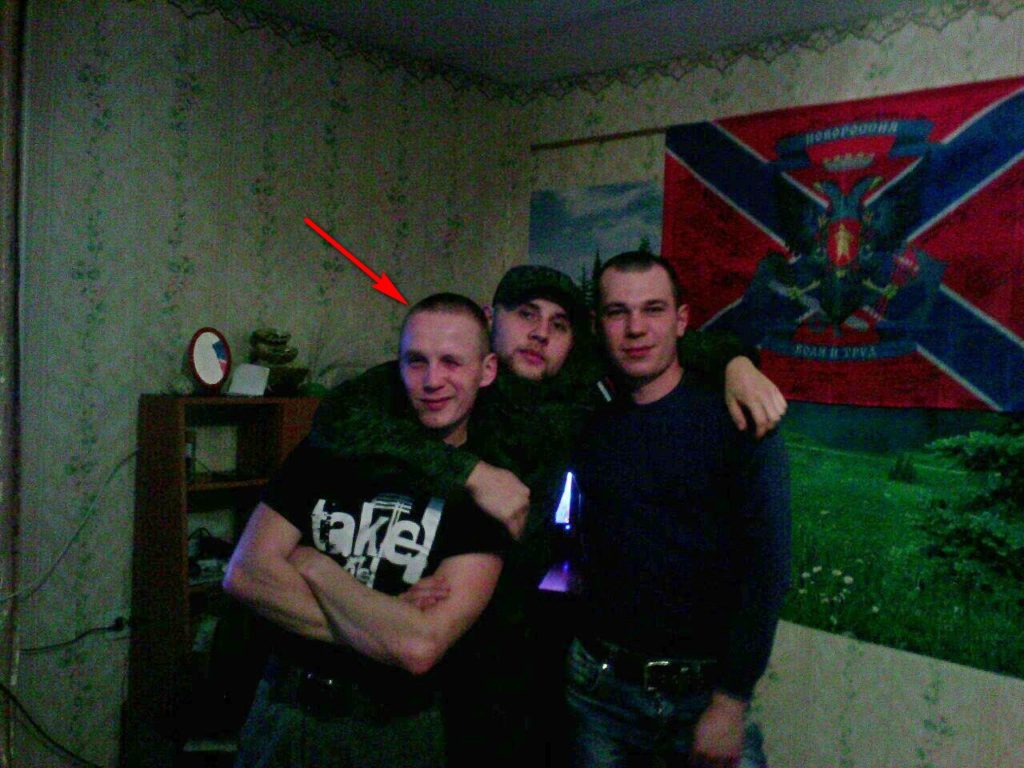 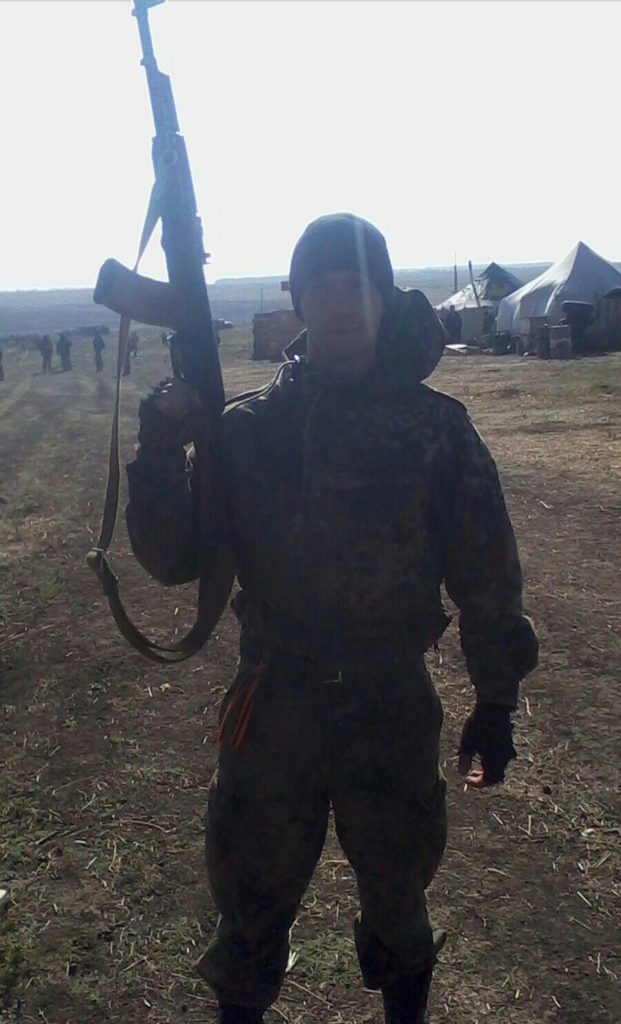 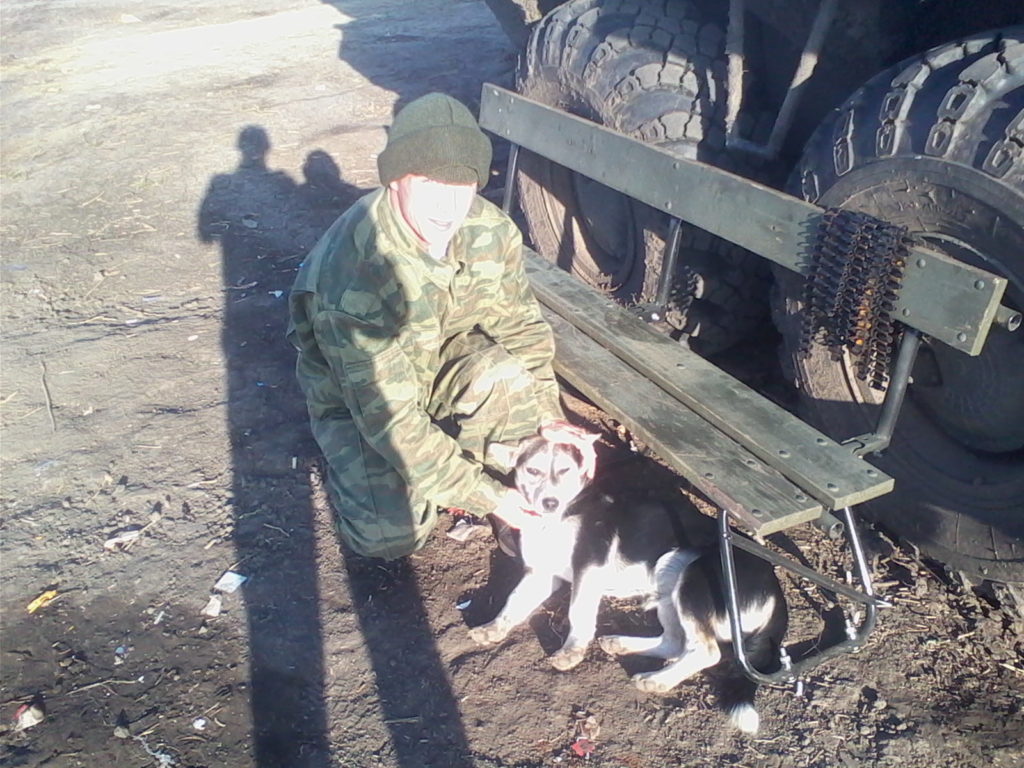 In the period of April – June 2017 the photos in Shadrin’s album have a different kind of imagery: his uniform now has Syrian patches for Desert Hawks (suqūr aṣ-ṣaḥrāʾ). While fighting, the Desert Hawks unit receives air support from the Russian Air Force, which serves as another confirmation of its affiliation with Russian Special Operations troops.

Our readers helped figure out the meaning of the Arabic text on the patch: it says “General Intelligence Department”.

In 2016, the joint group of Desert Hawks, Russian Special Operations Forces, and Vagner private military contractors was destroyed by ISIS fighters, who pushed it back by more than 60 km over the course of a single day. 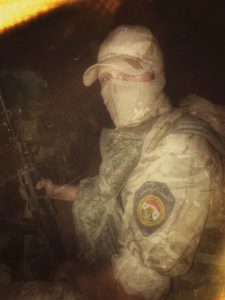 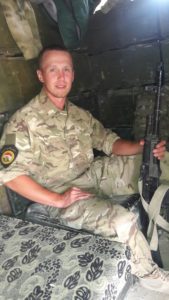 The same photograph was posted on Instagram under ‘@mighty_russia’ (http://archive.is/bU9BE) , captioned ‘Russian Special forces in Syria’, with blurred face of the serviceman in the image. 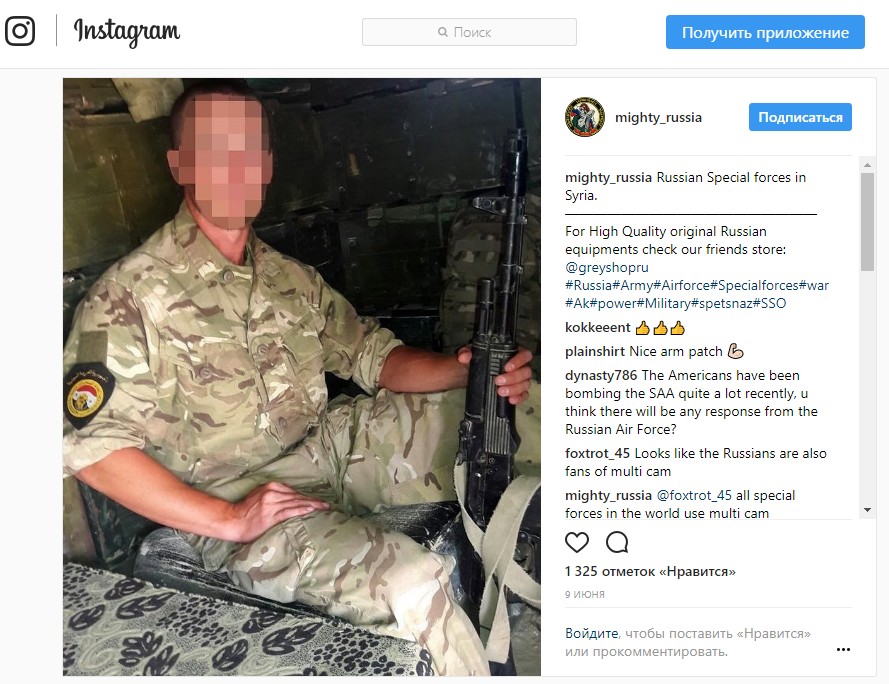 To recap, the monitoring activities performed by our team established that the Russian serviceman Kiril Sergeevich Shadrin started his contract-based service in the Armed Forces of Russia in 2015; his field missions took him to Donbas, and in 2017 he departed for Syria, which is where he is likely stationed now. Information presented here exposes just one case, a part of the larger story about the forthcoming failure of Russian special forces in Syria.

This publication was prepared by Vidal Sorokin  specially for InformNapalm.