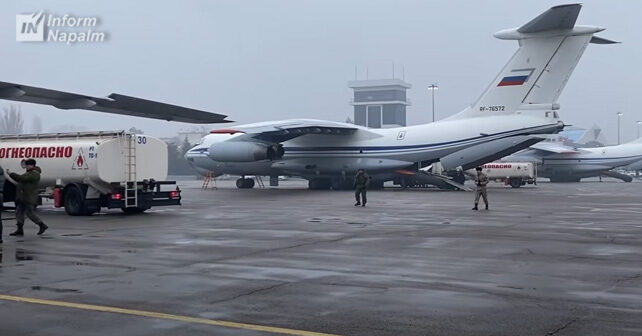 Hiding behind the illegitimate decision of the Council of the Collective Security Treaty Organization (CSTO) and involving its regional military bloc allies, the Russian Federation actually began the process of occupation of Kazakhstan. Russia continues to redeploy Russian special forces to the territory of the neighboring state. Most of these units also took part in the aggression against Ukraine in the Donbas and in the occupation of Ukrainian Crimea. It is also symbolic that the commander of the Russian Airborne Forces, Colonel-General Andrey Serdyukov will be in charge of the actions of the CSTO forces in Kazakhstan. He also commanded certain operations during the invasion of Crimea, coordinated military operations in the east of Ukraine, and in 2019 led the Russian troops in Syria. Read more in this article prepared by InformNapalm volunteer intelligence community.

On January 7, 2022, the official representative of the Russian Ministry of Defense, Major General Igor Konashenkov, said that the airlift group mustered by the Russian Ministry of Defense consisting of more than 70 Il-76 and 5 An-124 transport aircraft is moving units of the Russian contingent to Kazakhstan around the clock. Russian military transport aircraft are also involved in the operational transfer of military contingents from Belarus, Tajikistan, Kyrgyzstan and Armenia.

Yesterday, January 6, InformNapalm reported that the Russian Federation had already transferred to Kazakhstan the units that participated in the aggression against Ukraine providing the list of military units and findings of their participation in the aggression. On January 7, Konashenkov confirmed that the Russian forces include units of the 45th Special Forces Brigade of the Airborne Forces, the 98th Airborne Division, and the 31st Brigade of the Airborne Forces. He confirmed that all servicemen of the Russian contingent had undergone special training and have real combat experience. Colonel-General Serdyukov, Commander of the Russian Airborne Forces, was appointed to command the operations of the CSTO forces in the Republic of Kazakhstan.

The Russian servicemen who arrived in Kazakhstan immediately took control of the Almaty airport in order to ensure the unhindered transfer of the occupying military contingent and secure control over infrastructure facilities important for the Russian Federation.

On January 7, the Russian Ministry of Defense also reported that 9 Russian Il-76 transport aircraft with paratroopers and their equipment landed at the Almaty airfield.

By redeploying troops to Kazakhstan, the Russian Federation is simultaneously solving a number of geopolitical tasks. Involving other CSTO countries in the occupation process under its leadership, the Kremlin binds the leadership of these states with the criminal regime of Vladimir Putin.

An especially alarming precedent is the redeployment to Kazakhstan of the servicemen from the 103rd Airborne Brigade of the special operations forces of the Republic of Belarus from Viciebsk. This may be the first step towards the involvement of Belarus in the Russian military operations against other countries, especially against neighboring Ukraine.

If the Russian occupation military operation in Kazakhstan succeeds, and if the countries of the collective West limit their reaction to statements of “deep concern”, this could send a strong signal to Russia that a blitzkrieg against Ukraine may turn out acceptable under certain hybrid conditions. Especially if Russia goes for artificial destabilization of Ukraine and then pushes through a well-rehearsed decision of the CSTO to “bring in peacekeeping forces.” The NATO countries should take into account that the Russian Federation is acting quickly and, in fact, single-handedly, hiding behind the decisions of the CSTO Council in order to avoid single responsibility for the military invasion.

Translated by Artem Velichko. Distribution and reprint with reference to InformNapalm is welcome! (Creative Commons — Attribution 4.0 International — CC BY 4.0)