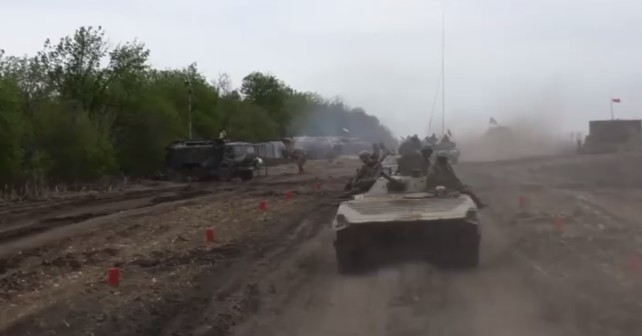 For more than a year the InformNapalm team of volunteers and researchers presented hundreds pieces of evidence of Russian aggression against Ukraine. The information was found by monitoring open sources and analysis of photo and video materials posted on social media pages of mercenaries and Russian military servicemen. Then, it was compiled into articles that formed a complete picture of the Russian military presence in Donbas. However, there can never be too many facts, so, we keep looking for more information and analyze it with hope that our work will be used when the people, responsible for starting this war, are put on trial for their crimes.

After Aleksey Mozgovoy (commander of the separatists’ Prizrak Battalion) was killed, Russian mercenaries felt that something was wrong. “Cleaners” from the Russian General Staff Main Intelligence Directorate appeared in the so-called Luhansk People’s Republic again. As it is known, the psychological state of a mercenary, who expects his “adventure” to be over soon, is very unstable.That is why their field commanders started exposing their Russian donors on camera. Even Motorola (commander of the Sparta battalion) helped with this.

The caption with the photos: “Information from the militia of Novorossia. May22, 2015. Photos from “Motorola”.’Before upcoming battles, we get new weapons and practice every day. We were able to get new pieces of weaponry. They shoot in tighter groups with less recoil.  Guys are happy. Thanks to the good people who helped with the iron.” 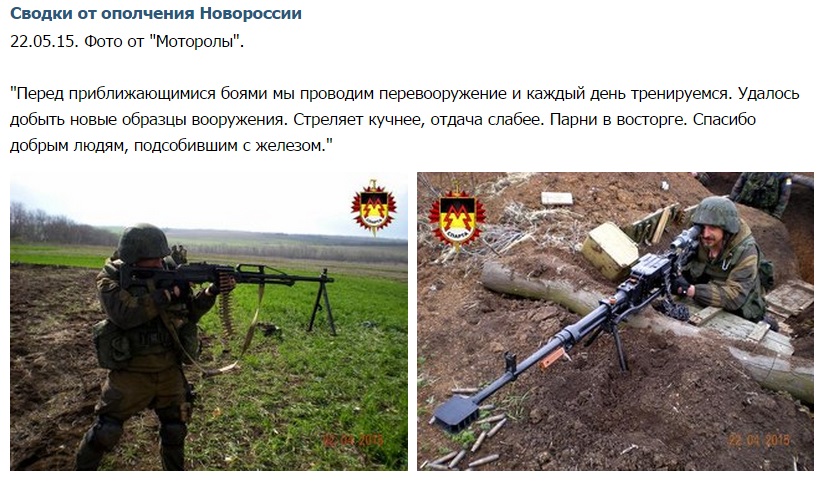 In the picture on the left, we can see a Russian 7.62 mm machine gun, the PKP Pecheneg, that was designed on the basis of the PK machine gun. It is deployed by the Russian army and has never been supplied to Ukraine or deployed by the Ukrainian army.

In the picture on the right, we can see a Russian heavy machine gun, the Kord, with a belt feed for 12,7×108 mm rounds.

The Kord machine gun was developed in the 1990s as a replacement for the NSV machine gun because, after the dissolution of the USSR, the main production of NSV guns was located outside of Russia. It was designed in the Degtyarev plant in Kovrov and has been mass produced there. The Kord machine gun has been deployed by the Russian Armed Forces since 1998.

It was actively used by the Russian army during the second Chechen campaign and then during the military conflict with Georgia in 2008.

The posting of the two pieces of photo evidence of Russians supplying weapons in one message from the popular separatists’ group is frankly a slap on the face of Russian Foreign Minister Sergey Lavrov and the whole propaganda machine who said that Russia was not a side of the conflict.

To make it even more convincing, we present one more piece of evidence: a Russian command vehicle.

On May 10, 2015, a video (https://www.youtube.com/watch?v=V5LjhrPFH9c) showing training maneuvers of the so-called motor rifle battalion “Vikings” of the DPR army was posted. Those “Vikings” try to imitate the 5th tank division SS “Viking” (5 SS-Panzer-Division “Wiking”). The only difference is that they have Russian not German weapons. However, the ideology of the new Russian-Aryan missionary work is presented to the same extent.

So, the video of the “DPR battalion exercises” shows an exclusively Russian command vehicle, constructed on the basis of the KAMAZ truck with an open aerial antenna. 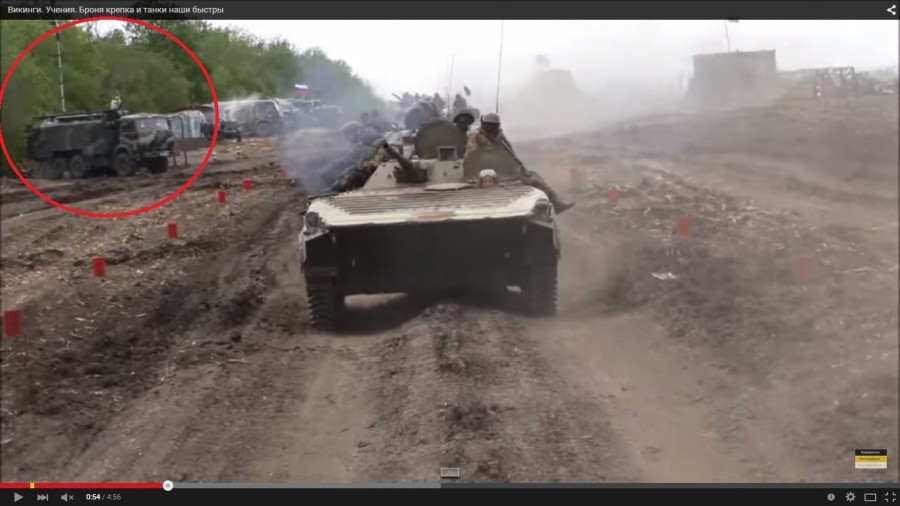 We can assume that the mercenaries, who keep taking selfies and shooting videos that demonstrate exclusively Russian pieces of military equipment, do that not because they are stupid, but on purpose, because they want to drag Russia into a full scale open war with Ukraine. The separatists do not count on their own forces to win the war, even with the support of Russian weapons or various Russian units, any more. Of course, there is the risk of being mopped up by the Russian special forces for activities that contradict the official Kremlin statements.  However, they have no choice. This is the way “Novorossia” exposes Russia to the international community, making all the Russian attempts to hide the hybrid war ineffective.