Evidence collected: commander and crew of R-60 missile boat took part in the aggression against Ukraine 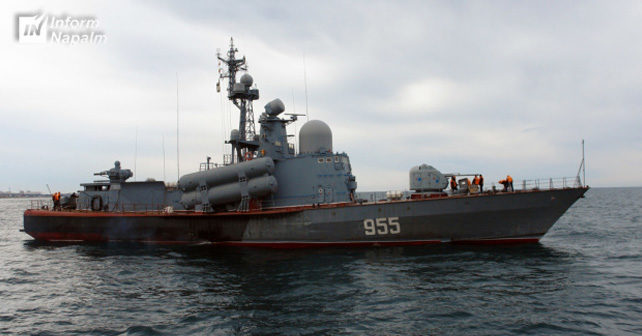 The commander of the ship is not on the list of Russian military commanders and Russian officials indicted by the Main Military Prosecutor’s Office of Ukraine. R-60 missile boat is also not listed among the ships involved in the aggression against Ukraine. Therefore, InformNapalm volunteers have collected new materials, and publicly call on the competent authorities of Ukraine to carry out all necessary legal proceedings regarding the commander and crew members of the R-60 missile boat of the Black Sea Fleet of the Russian Federation.

Two squadrons of the 41st Brigade of Missile Boats

Ships of both squadrons participated in a special operation to seize Crimea. InformNapalm wrote earlier about the participation of the 166th SMSS in the war against Ukraine. In this feature, we publish the data of the Russian aggressors from the 295th Missile Boat Squadron, specifically of the crew members of R-60 missile boat (tail number 955).

Pictured in the photo are Russian sailors Konstantin Tyazhko (left) and Oleg Lyovochkin (right) with medals for the occupation of Crimea. Both posted this photo in their social media albums.

He did his conscript service on the R-60 missile boat. The caption under the photo of the boat says: “Here he is, our handsome r-60 boat”

In Lyovochkin’s album, there is a photo on board. We compared this photo with the photo of R-60 boat published on the Russian VTS Bastion military website.

In his social network profile, he indicated the brigade in which he served from 2013 to 2014.

A photo of R-60 missile boat captioned: “My little boat”:

At the time of the Crimea invasion operation captain of the 3rd rank Evgeny Kuzmin was in command of R-60 boat. A photo of Kuzmin and detailed information about him can be found in the article of October 30, 2015 in the newspaper of the Russian Black Sea Fleet Flag Rodiny (Russian for the “Flag of the Motherland”, pdf version was saved on our website in case of removal from a Russian source).

The article says that Kuzmin graduated from the Popov Naval Institute of Radio Electronics in 2003. His first position was the commander of the combat services 4&7 (communications and signals) of the missile boat R-71, then later he became an executive officer on the same boat. After a senior officer course, he was appointed executive officer of Samum missile corvette (or “small missile ship” according to the Russian naval classification), and in September 2012 he became commander of the R-60 missile boat. He was awarded medal class II of the Order For Merit to the Fatherland (the award was granted for participating in the aggression against Georgia), a medal class II For Military Valor (for the military service of the missile boat in the Mediterranean Sea), and Medal of Ushakov.

As a commander of R-60 missile boat, Kuzmin was also spotted after the annexation of Crimea.

We found the lists of Russians awarded for participating in the war against Georgia, and Evgeny Yuryevich Kuzmin was among them. Thus we reliably established his full name.

InformNapalm found a photo of Kuzmin with awards mentioned above. Kuzmin also has a photo with a medal For the Return of Crimea.

Kuzmin is not on the list (1, 2) of the Russian military commanders and Russian officials indicted by the Main Military Prosecutor’s Office of Ukraine. R-60 missile boat is also not listed among the ships involved in the aggression against Ukraine. Therefore, we appeal to the relevant authorities of Ukraine and urge them to carry out all the necessary legal proceedings.

*If you are viewing this article in the Accelerated Mobile Page (AMP) mode, some of the links and pictures might not be displayed. If you are interested in the whole content of this page, we recommend viewing it on a PC or laptop.

No Responses to “Evidence collected: commander and crew of R-60 missile boat took part in the aggression against Ukraine”