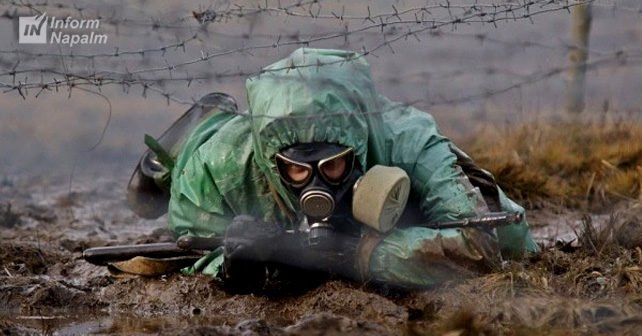 Russian Radiological, Chemical and Biological Warfare (RCBW) units are being re-routed between the territories occupied by Russia in connection with the COVID-19 pandemic.

On April 17, 2020, units of the Russian Black Sea Fleet from the Crimea were deployed to the self-proclaimed Republic of Abkhazia, an occupied territory of Georgia.

“A convoy of 13 special vehicles, including Mobile Aerosol Disinfection Systems, ARS-14M Chemical Spraying Stations, and TMS-65U Heat Treatment Vehicles equipped with jet engines, is on a march from the Crimean Peninsula to the Republic of Abkhazia,” – the Black Sea Fleet press service reports.

On April 15, 2020, the website of the Ministry of Reintegration of the Temporarily Occupied Territories of Ukraine reported that during March and early April 120 specialists from RCBW units of the Southern Military District of Russia were assigned to the Russia-occupied territories of Ukraine on a rotational basis.

On April 16, 2020, Russian Prime Minister Mikhail Mishustin signed Decree #1031-r, which expanded the list of persons allowed to cross the country’s border. The right to cross the border was given to military and civilian personnel from Russian military bases located outside the Russian territory. Note that the previous order #763-r of March 27, 2020 stated that Russian citizens in possession of a passport of the Russian Federation who permanently reside in certain districts of Donetsk and Lugansk Oblasts of Ukraine may also cross the Russian border. Earlier, the Russian Ministry of Internal Affairs reported that almost 200 thousand passports of the Russian Federation were issued under the simplified procedure in the Donbas in 2019.

According to intelligence, it is the occupying military contingents that are currently the main epidemiological threat of COVID-19, spreading virus to everyone including the civilians. In addition, citizens who worked in Russia, mainly in Moscow, are returning to the Russia-occupied territory. Due to a lack of work, some of them are now finding “employment” in occupying military contingents and become potential carriers of the infection. As of April 18, 2020, according to the official statistics, 36793 cases of COVID-19 have been confirmed in the Russian Federation, including 20754 cases in Moscow alone.

Read and distribute other InformNapalm materials

No Responses to “Russia re-deploys Radiological, Chemical and Biological Warfare units in occupied territories in connection with COVID-19”