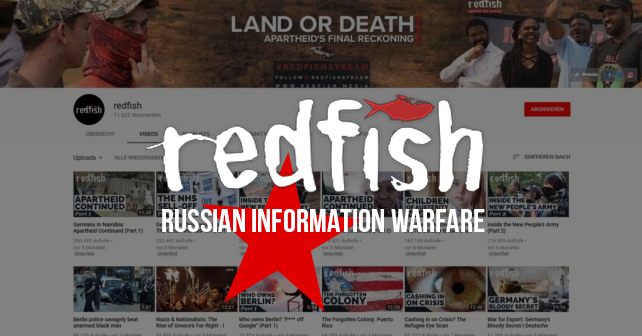 Recently, a local sensation spread through the German media. It turned out that the office of two new media channels related to Russia is located in the very heart of Berlin. The journalist investigation got a catchy title “In the Middle of Berlin: Russian secret media center in Europe.”

The journalists of the T-Online website noticed that the Berlin office of the Russian state-owned company Ruptly shares office space with two relatively little-known projects Redfish and Maffick.

The Redfish social journalism project was launched only last year. This fish claims that it swims against the mainstream, and that it is no red herring. The project caught the attention of the German media quite recently, when a video of the police detaining a black guy all of a sudden became the center of a lively debate on the German web. The guy resisted, and the police officers fumbled clumsily trying to immobilize the offender.

Berlin police savagely beat an unarmed black man because of a "suspected bicycle theft". One officer takes out his gun. Passers-by get pepper-sprayed when they try to stop the violence, police call the public's bravery "violent resistance". #Kotti #DankePolizei pic.twitter.com/Ce2QQIpGM2

The video was actively commented on by the German Left and Green politicians. I saw that video too. Such videos play well into the popular dislike for the police, making people talk about the state oppression machine and vividly confirming the “growth of racist sentiment” in Europe. At first, I did not pay attention to the channel itself: It looked like another “independent media” project that had flooded Western media platforms recently.

But T-Online journalists went on bringing to the fore the director of Redfish, a British journalist Lizzie Phelan (also known as Lizzie Cocker), who also runs the Ruptly project, a part of the Russia Today (RT) media empire. Thus Redfish turned out to be another channel of Russian propaganda, located in the very center of Berlin. The journalists interviewed indignant colleagues and a surprised MP from the Green Party who had given an interview to this channel. And here it was, a sensation!

But there is a catch…

Let me remind my German colleagues that Lizzy Phelan had previously worked for … Russia Today. Indeed, it is not explicitly stated anywhere on the Redfish website that it is a Russian project. However, back in February, the editor-in-chief of Redfish had to respond in a blog to a series of articles in English-language media that exposed the connection between this so called “independent” media resource and the Russian state channel Russia Today.

Also no English-language media would paid attention to a small new recourse for a while, but the Vice channel wrote about a curious video on Redfish with elements of conspiracy theories. It has beet speculated that the fire in the London skyscraper Grenfell Tower is the result of a plot of either local realtors or authorities or masons, or whatever force to free the area from the poor and to redevelop it with expensive real estate. The message and it’s inspiration is quite clear, isn’t it? Vice noted a high quality of this “amateur community-produced media”.

Subsequently, The Daily Beast, The Daily Mail and The Times wrote about the relationship of the authors of this conspiracy video with the Russians.
Redfish realized that it was necessary to somehow respond to the charges, and wrote in a blog in the manner “Yes, we took money from the Russians, but what does this prove?”

“Yes, redfish’s funding comes from Ruptly, a news agency owned by RT. But that’s about all. Neither the Beast, Times or Mail have been able to discredit our editorial independence.”

And then the editor-in-chief of Redfish fired a series of whataboutisms on the sponsors or founders of the media that revealed the project’s connection with Moscow: the billionaire Berry Diller (The Daily Beast), Rupert Murdoch (The Times) and Harold Hermsworth (1868–1940, “a Hitler supporter” – yes, that’s what they wrote). Yes, and Vice also belongs to Murdoch, and so on and so forth.

Maffick & IN THE NOW

Together with the Redfish, German journalists also caught the media firm Maffick located in the same office. Founded in early 2018, Maffick is headed by Anissa Naouai, an American journalist from RT America and the owner of the Youtube channel IN THE NOW.

While Maffick has nothing special to boast of, IN THE NOW channel is somewhat noteworthy. There are not so many views on Youtube – the first videos of the project had less than a thousand views and are slowly gaining popularity: the content is rife with overstatement, and the authors put too much emphasis on politics. But IN THE NOW Facebook page looks really decent: an abundance of short uniformly-styled neat videos from different authors and agencies around the world make for great material for viral distribution on social media. There is practically no politics, sometimes the accents are subtly skewed, but in general it is a constant stream of simple and cute video content. To be watched and liked. And that is exactly what very many people did. Today the page has 3.3 million likes and 3.7 million subscribers. 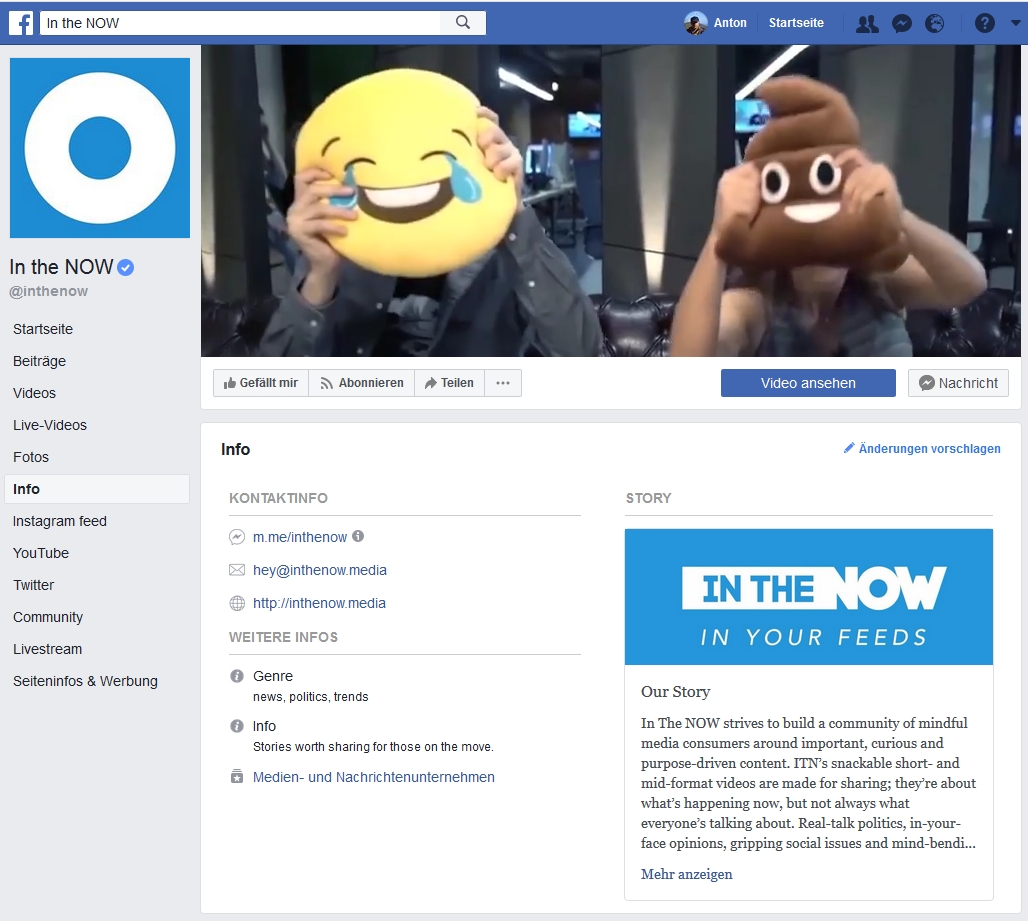 So, as we watch another interesting vid on Facebook, the Russians are developing their projects like Backthen (a history channel) or Waste-Ed (a channel for the environmentalists). And then with the subscriber numbers at those channels, comes the propaganda content.

So, how do the Russians typically get busted? Of course, you can try to secretly recruit leading Western journalists, painstakingly build agent networks for years to lure some opinion makers and change the agenda of the media. But it is a long and tedious task, strikingly obvious to the Western intelligence, and with the likes of Petrov and Boshirov as doers, prone to produce very loud failures.

Therefore, among the many Western journalists they simply pick those critical of the government and lacking a permanent job. Those outcasts get offers that they would have never received from large Western companies: here you have an excellent technical base, travel allowances, and a very good salary. People who willingly cooperate with the Russians do it for a simple and clear reason, and are realistic about their chances in the world of commercial media.

There is no need to provide them secret instructions about the content of their channels. Their materials do not even need to be sent to any Moscow office for approval. Call it self-censorship or ideological content, but journalists of Russian projects without any hints know very well what to film and how to present it. They have already signed their social contrat with the Russians and know what to do next.

“We started redfish to create a platform for the people who are at the heart of their own stories and to acknowledge that those stories are always part of a big picture which connects us all.”

Of course the people form your average Redfish will not walk around wearing shapkas in the company of a bear and toast vodka shots with a loud “Na zdorovje!” Redfish – or let’s rather de-capitalize it, as redfish is a generic media phenomenon deliberately designed to look like a western project. There will be cool stories, beautiful pictures, sometimes even featuring Russia.

They will collect your likes, because it is all really funny or relevant. Sometimes they will show videos about Russia with cool people from this country who make decent videos and raise good and important topics. It will make Russia look like a part of the civilized world. You will form and admiration about Russians, unaware that this sentiment was intentionally formed and paid for by the Russian government.

And if not for the clumsy conspiracy videos about the events in London, and the links of the company’s general manager Russia Today, it would have been not so easy to spot the Russian trail in this redfishy operation. But Petrov-Boshirov syndrome also helped the “enemies of Russia” here.

German media entirely missed the investigation of their British colleagues and paid attention to the Redfish only when it started gaining popularity among the domestic leftists, greens and anti-globalists. It turns out that I have recently watched several of their videos myself. I found interesting the series about left-wing activists from Berlin opposing the construction of a Google technology center. I am not a leftist or a anti-globalist. I simply wrote my own article about Berlin as the capital of startups. So, I unintentionally used the materials of Russian media troops.

Let’s see which topics have been raised on the Redfish channel since the foundation of this resource and compute the popularity of the videos (sorted by date):
Redfish Feed Title Number of views (on 10/21/2018)

On the face of it, the channel has not produced a media revolution. The most popular video got less than 400 thousand views on Youtube. Some videos are so divorced from reality that they were entirely watched by less than 10 thousand people. But it is really not the point. All these videos are against the system. There are stories about the poverty in the West, the struggle against capitalism, light versions of conspiracy theories which claim that all governments and corporations lie to us anyway.
These videos will stay on the web for years as evidence of how “bad” governments and large companies are. Because Google is destroying affordable housing in the center of Berlin for the sake of another office for its developers (of course, to keep an eye on us!), Nazism in Spain is on the rise oppressing the people of Catalonia, everything is ambiguous in Hollywood, everybody secretly hates Roma people, Israel cooperates with the Hungarian Nazis. Yeah, and there are Nazis everywhere, from Greece to Britain. And for course, the Germans – enslaving the peoples of Africa and trading arms around the world. You are getting the drift, right?

It's the 4th anniversary of the Iguala mass kidnapping when 43 students were abducted in Mexico. Many were murdered by guns supplied by @HK_Firearms. Watch our report on how German arms illegally end up in conflict zones #Ayotzinapa4Anos https://t.co/nwY292nD74

So, Redfish will not produce a media revolution, but will diligently feed ideological ammunition to any opponent of the Western system. And sooner or later it will quietly reap its harvest. There will be no explosions of thermonuclear magnitude in the ideological and information warfare, don’t worry!

But although the French Communist Party is long gone, its leftist offspring continue to gain votes in elections and disseminate pro-Russian propaganda. The student movement in Germany of 1968 eventually transformed leftism into the hallmark of most modern German media. That is why Western intellectuals will never forgive Vietnam War to America, but without hesitation will justify Russian invasion in Georgia and Ukraine. We live in an information system still bearing the thought patterns of the influences thrust on it by the USSR. We reliably know the half-life of radioactive elements, but the time span of the ideological weapons is difficult to estimate even now, many years after the end of the USSR.
________________________________________

This publication was prepared by Anton Pavlushko specially for InformNapalm. Translated by Volodymyr Bogdanov, edited by Artem Velichko
(Creative Commons — Attribution 4.0 International — CC BY 4.0)
Repost and share with friends!
For notifications about InformNapalm investigations follow us on
Facebook / Twitter

No Responses to “Redfish: Russian red herring swimming against the western mainstream”