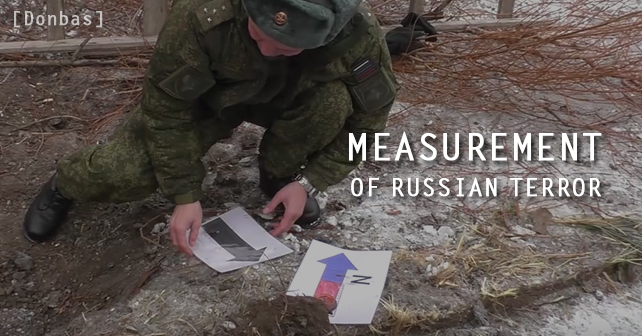 Volunteers of the InformNapalm international volunteer community continue to record the facts of media terrorism in the context of the escalation in the Avdiivka area and along the demarcation line in Donbas.

At the end of December we already noted that militants intensified provocative shellings of the territory under their control, suggesting Russia’s intent to heighten tensions in the conflict zone.

We will now review another example of a provocation, which immediately preceeded the escalation in the fighting.

Having failed to achieve the desired result, they used a well-known tactic: shelling of the occupied territory to provide Russian media with the images it required. Donetsk, Bryanka (Luhansk Oblast), Horlivka and other cities in the occupied territory became the targets of shelling. Russia took care of providing media coverage of the incidents.

It is very difficult to analyze all provocations, but when Russian channels’ reports contain photos and videos, the inconsistencies in propagandists’ interpretations of the events come to light. For this analysis, we were able to find photos and videos of a point of impact in Bryanka. We established that the location of the impact was near apartment building 8 in Molodezhnyy microdistrict, and Olymp supermarket (see map). 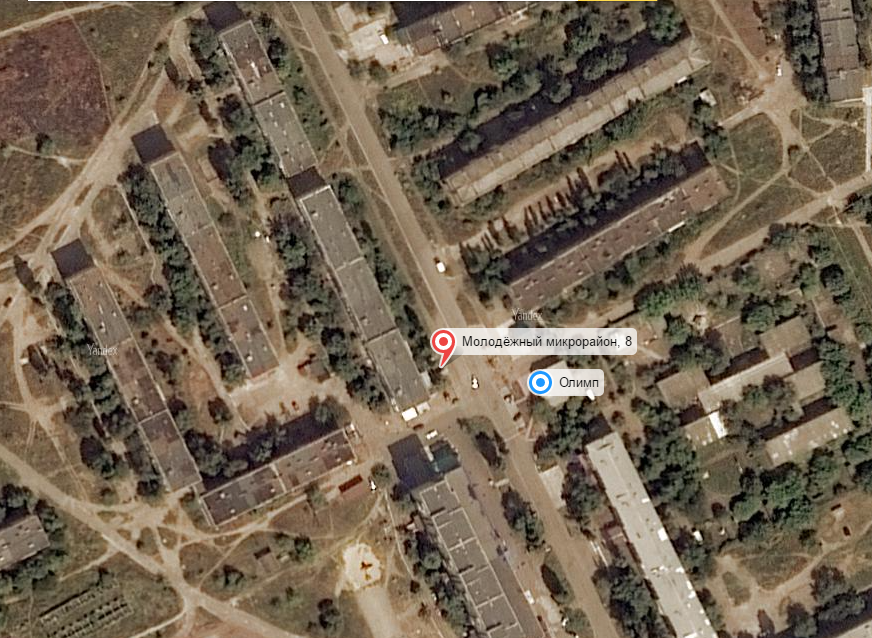 Here are pictures 1-7 from the top down in sequence: 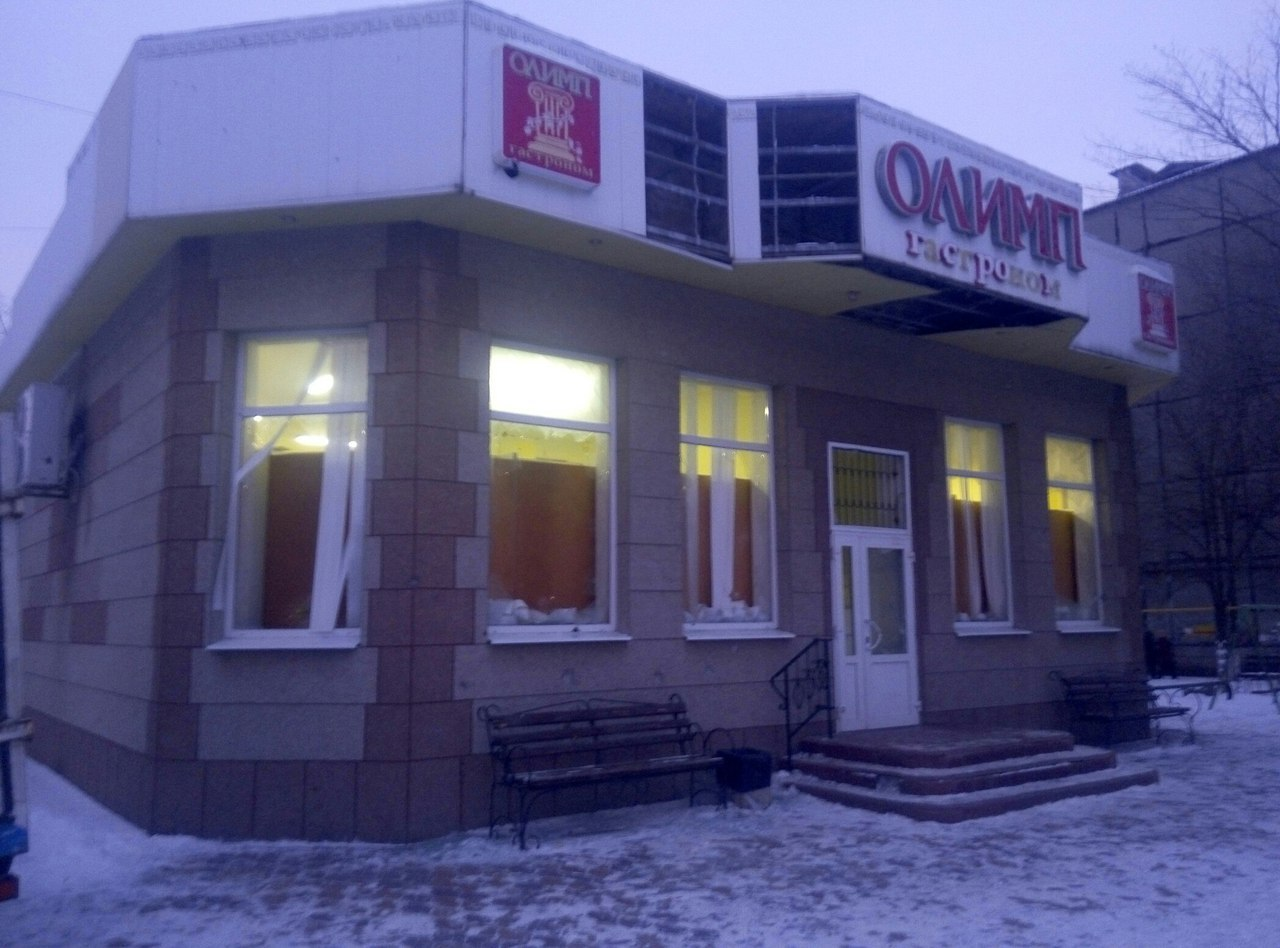 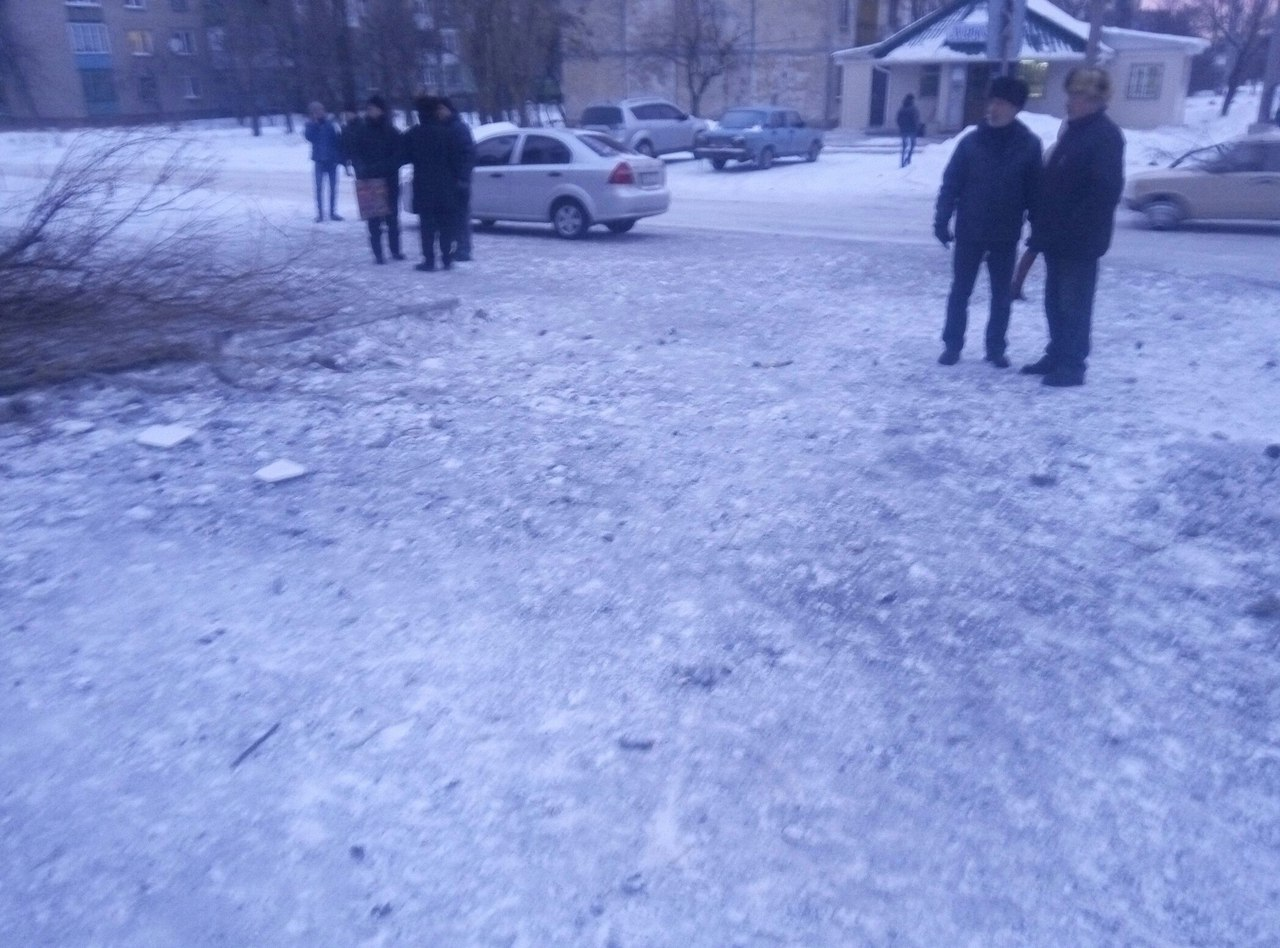 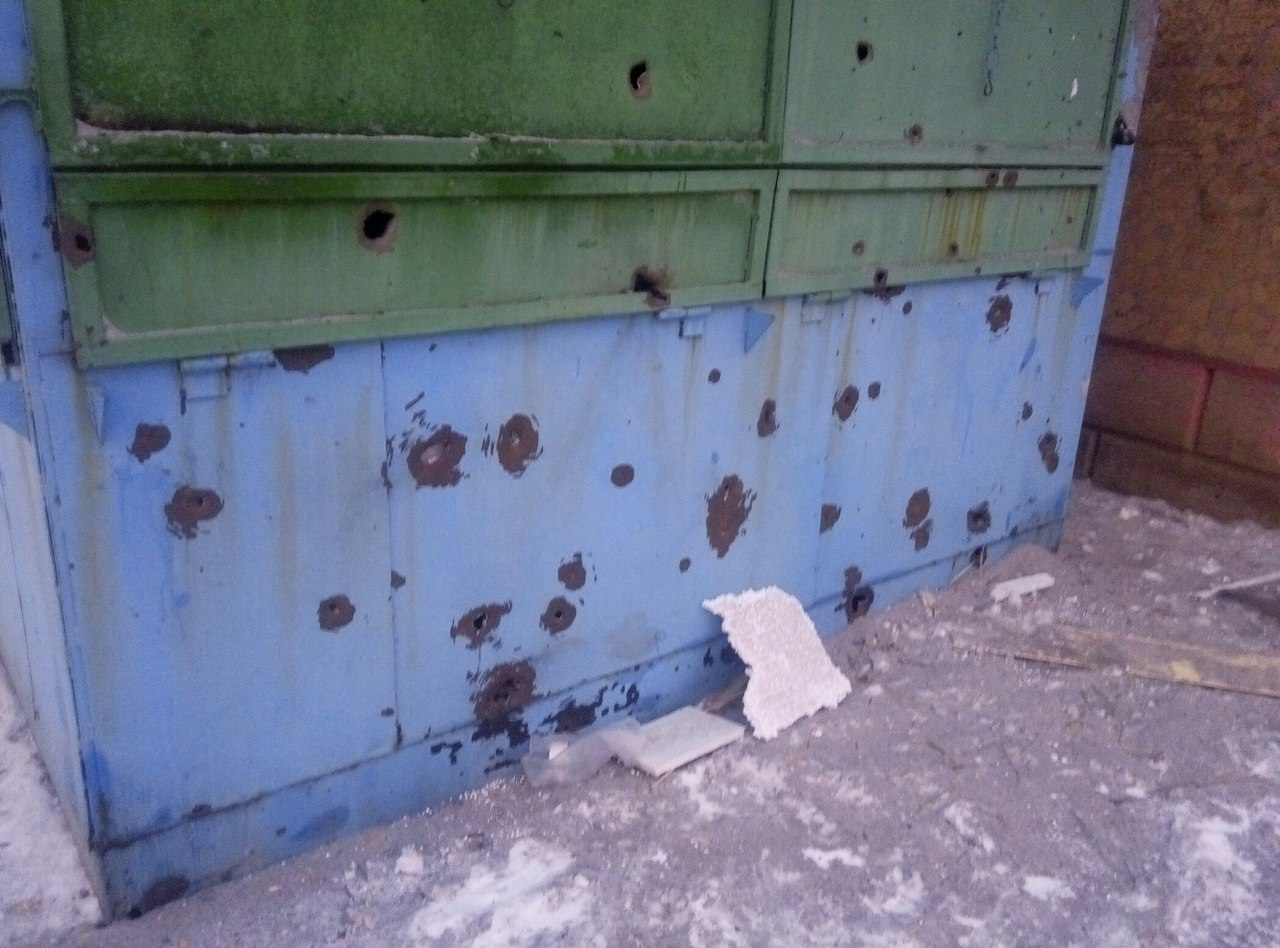 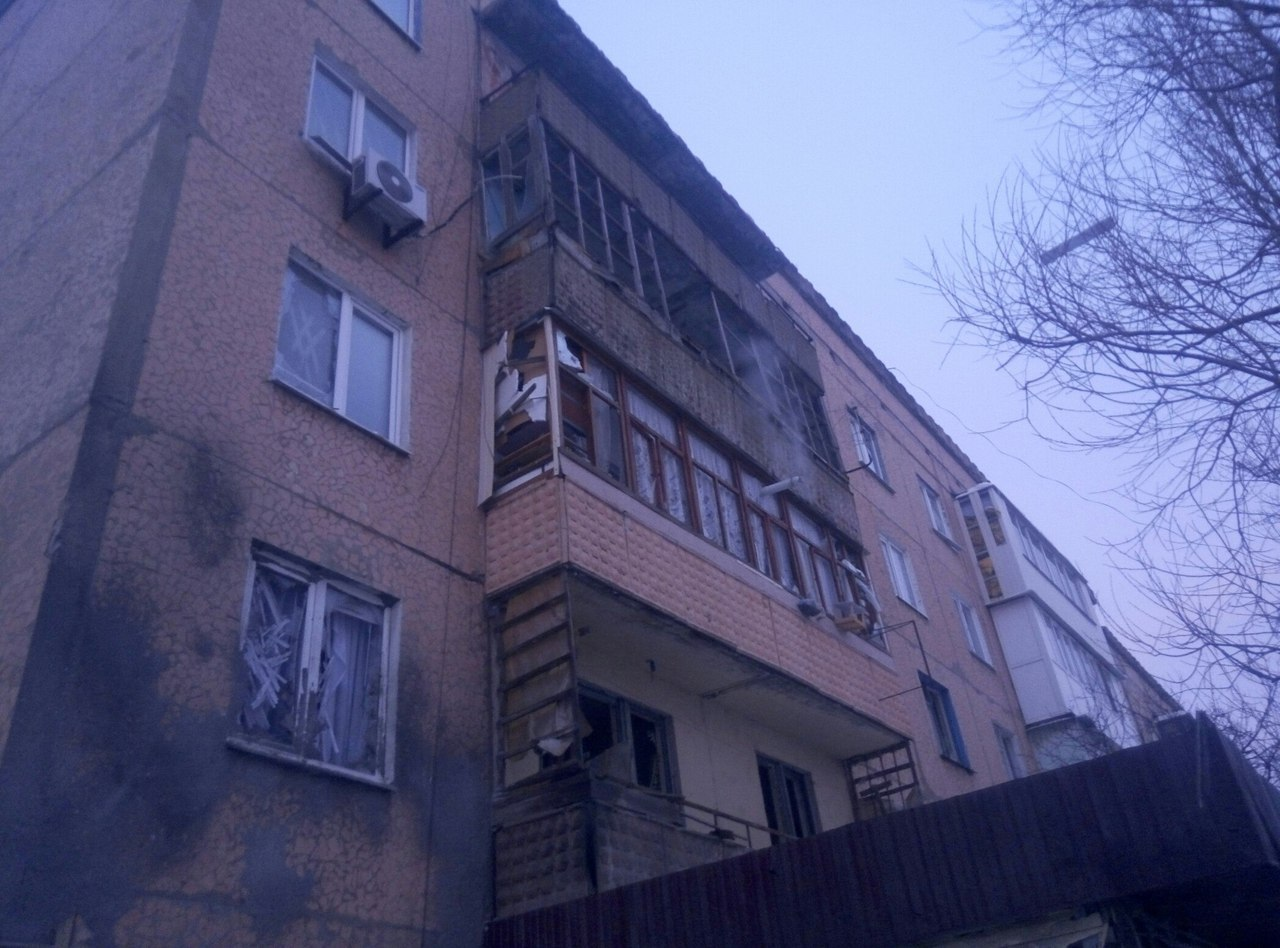 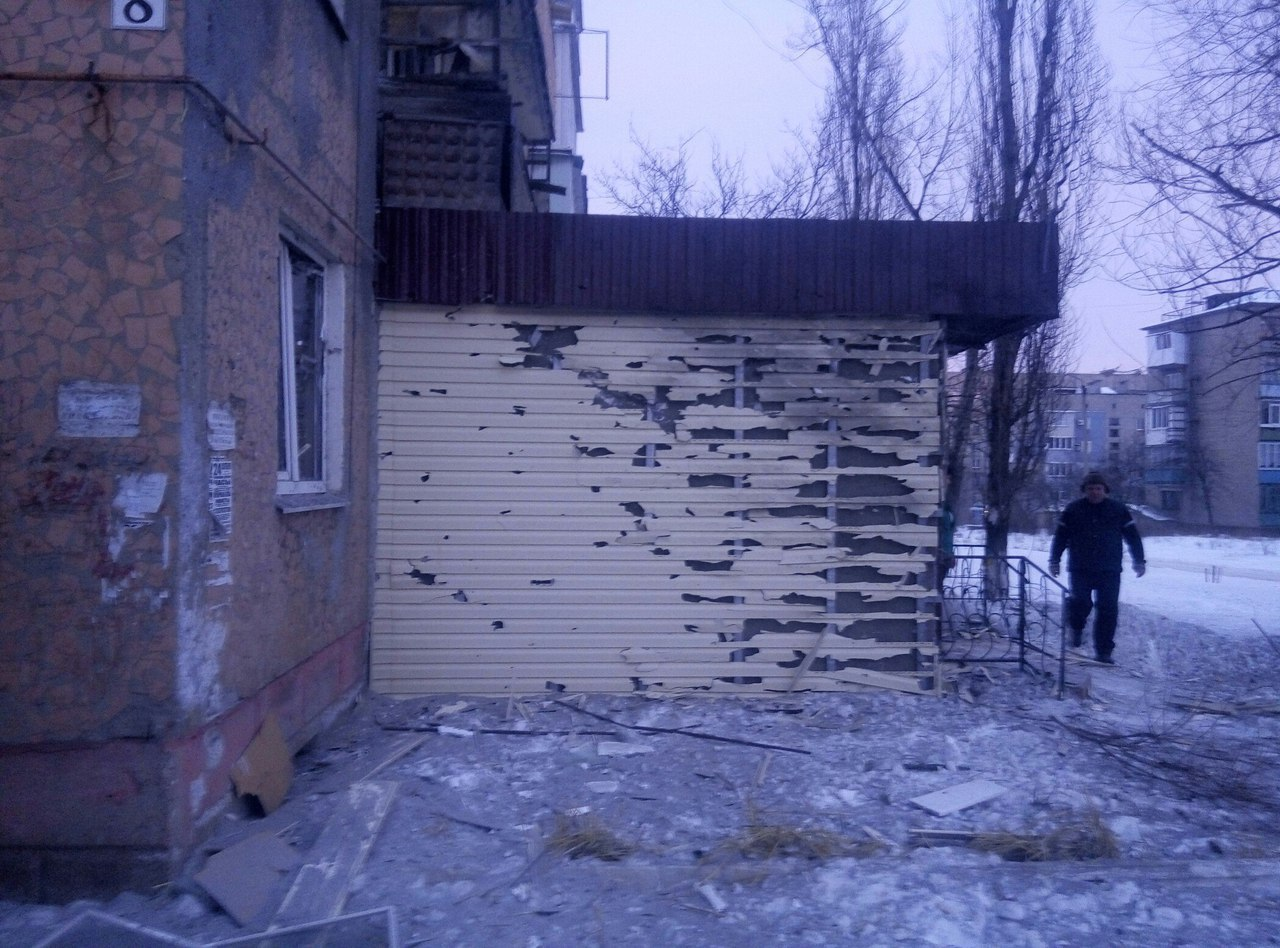 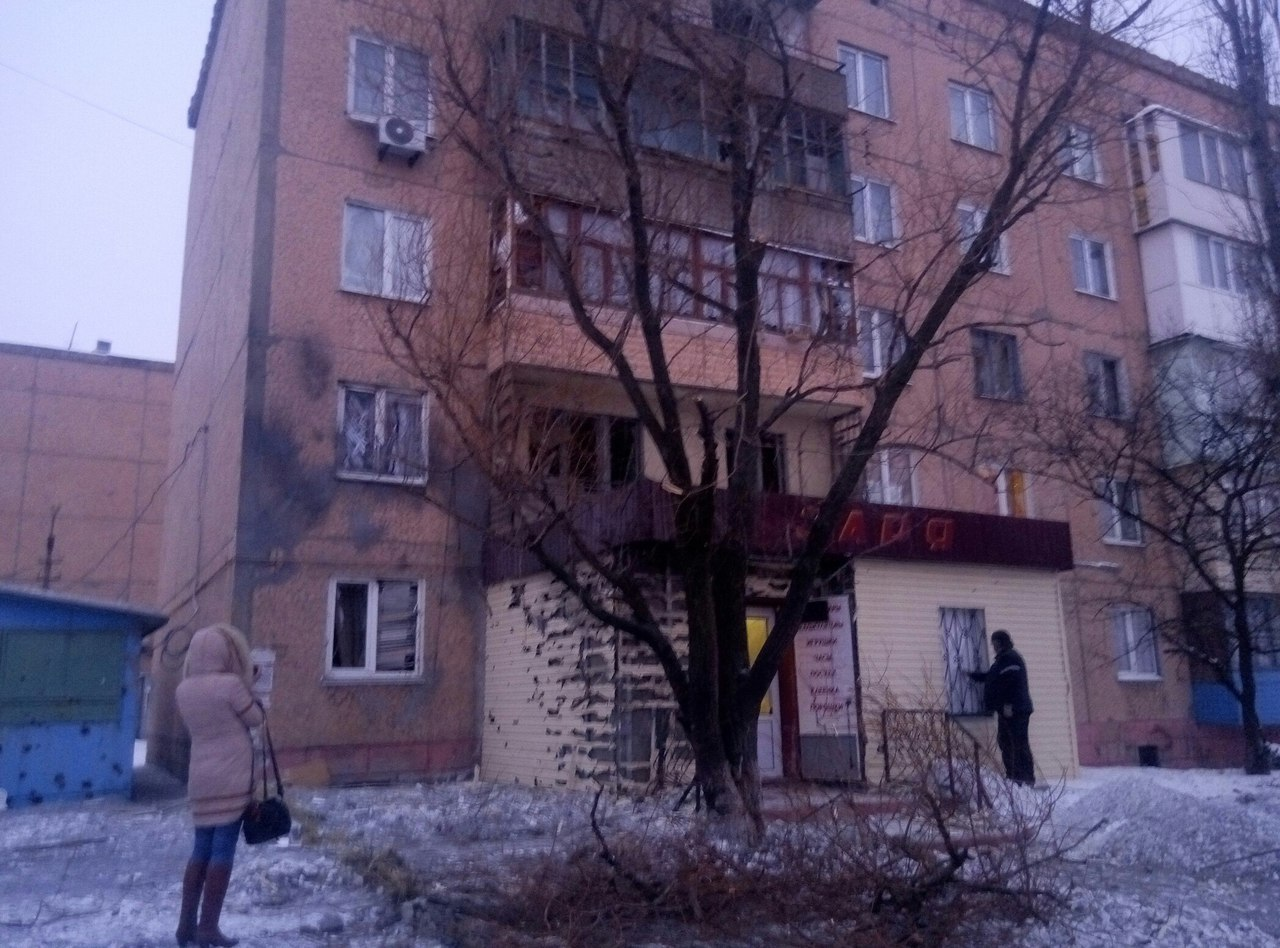 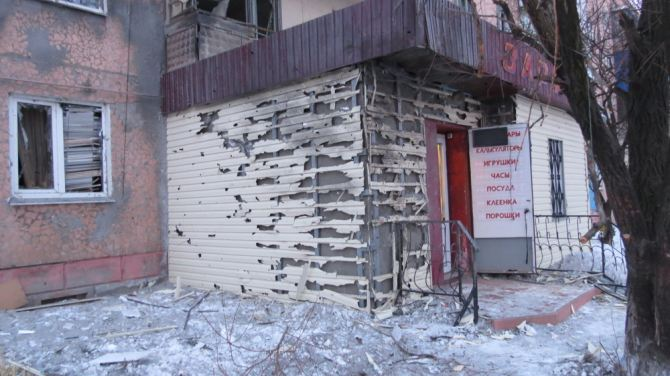 Additionally, we use a video from the Russian propaganda channel “ANNA-News”.

Now let us consider these photos in more detail. They do not show the area between the apartment building and the supermarket, nor we can see the impact crater. The traces of fire at the second floor level of apartment building 8 (pictures 4, 5, 6) and the type of damage (the broken balcony side panels and the damaged side wall of entrance) allow us to state that the point of impact was close to that wall. And the absence of damage on the side wall of the building 8 means that the explosion occurred in front of the building. 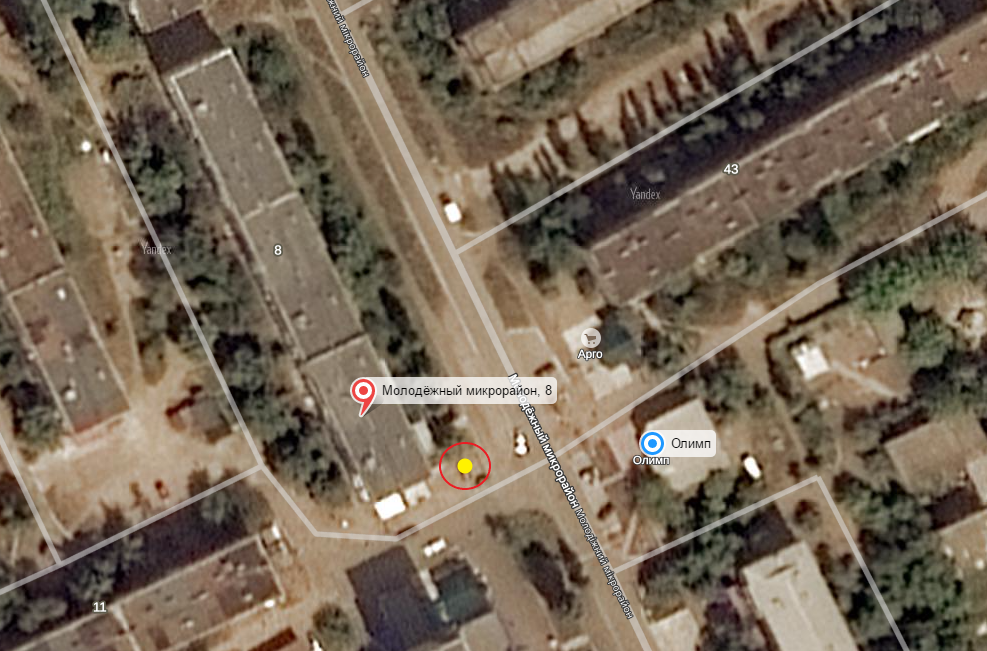 Photo number 6 shows this place. So why do we not see the crater? Actually, the crater was so small, that it was covered by dirt, whether accidentally or intentionally. The kind of damage also suggests a low yield ordnance: you can see windows and  plastic cover damaged, tree branches cut; but there was no significant harm done to the walls or the tree standing in close proximity. The effective range for such ordnances is within 3 km.

The crater is visible in the “Anna News” video: it is located next to the tree and has a very small size – approximately 50 cm. There is no prominent ellipse, which is typical for situations, when the ordnance is launched on a high-angle trajectory from a location in the immediate vicinity. You can see the crater covered by tree branches in picture 6 – note that the branches, allegedly fallen, are located only next to the crater. 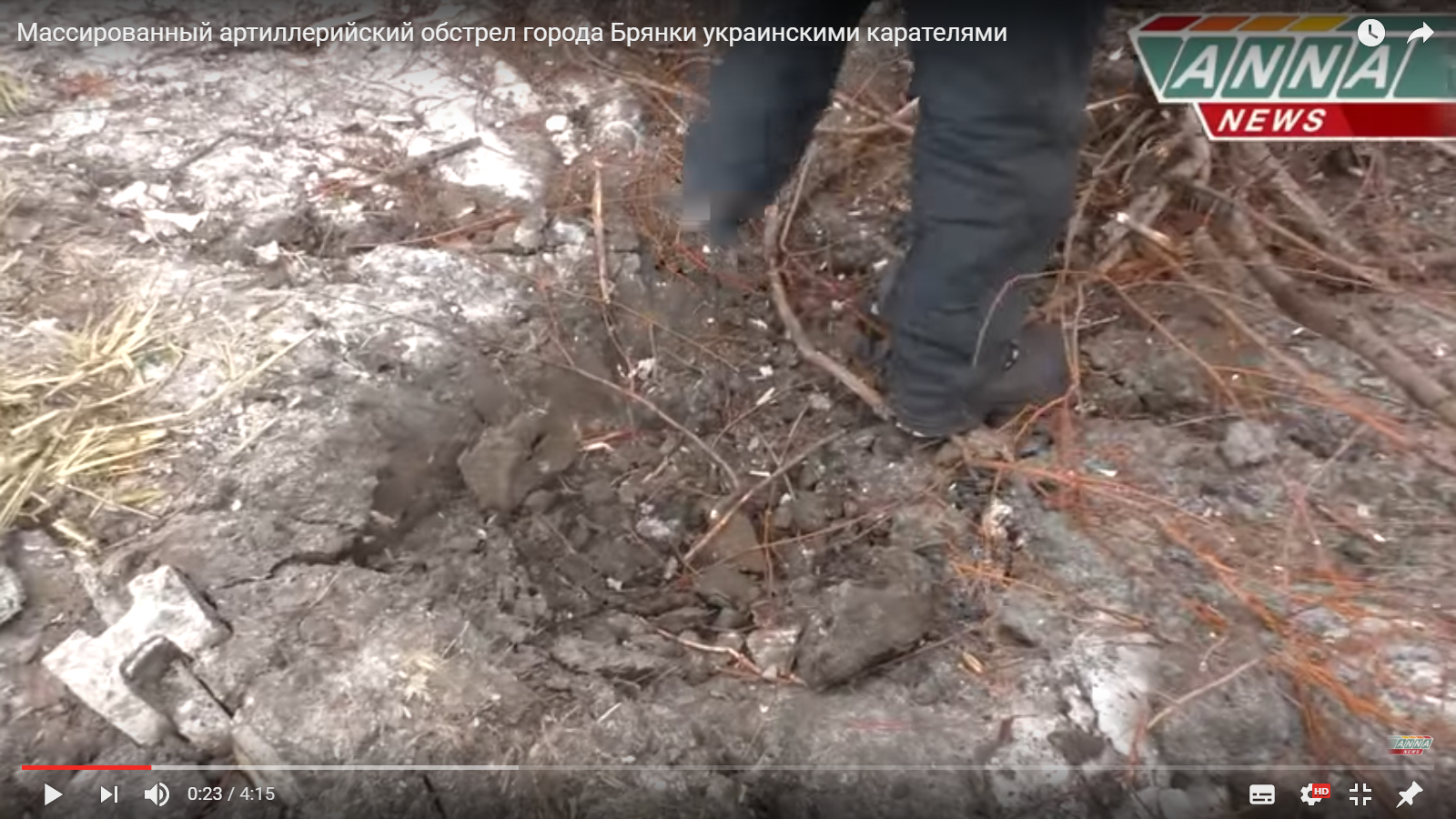 A bit later we see the same crater, but it has been dug up and prepared for taping, and someone even indicated the “ellipse” to match the desired direction. 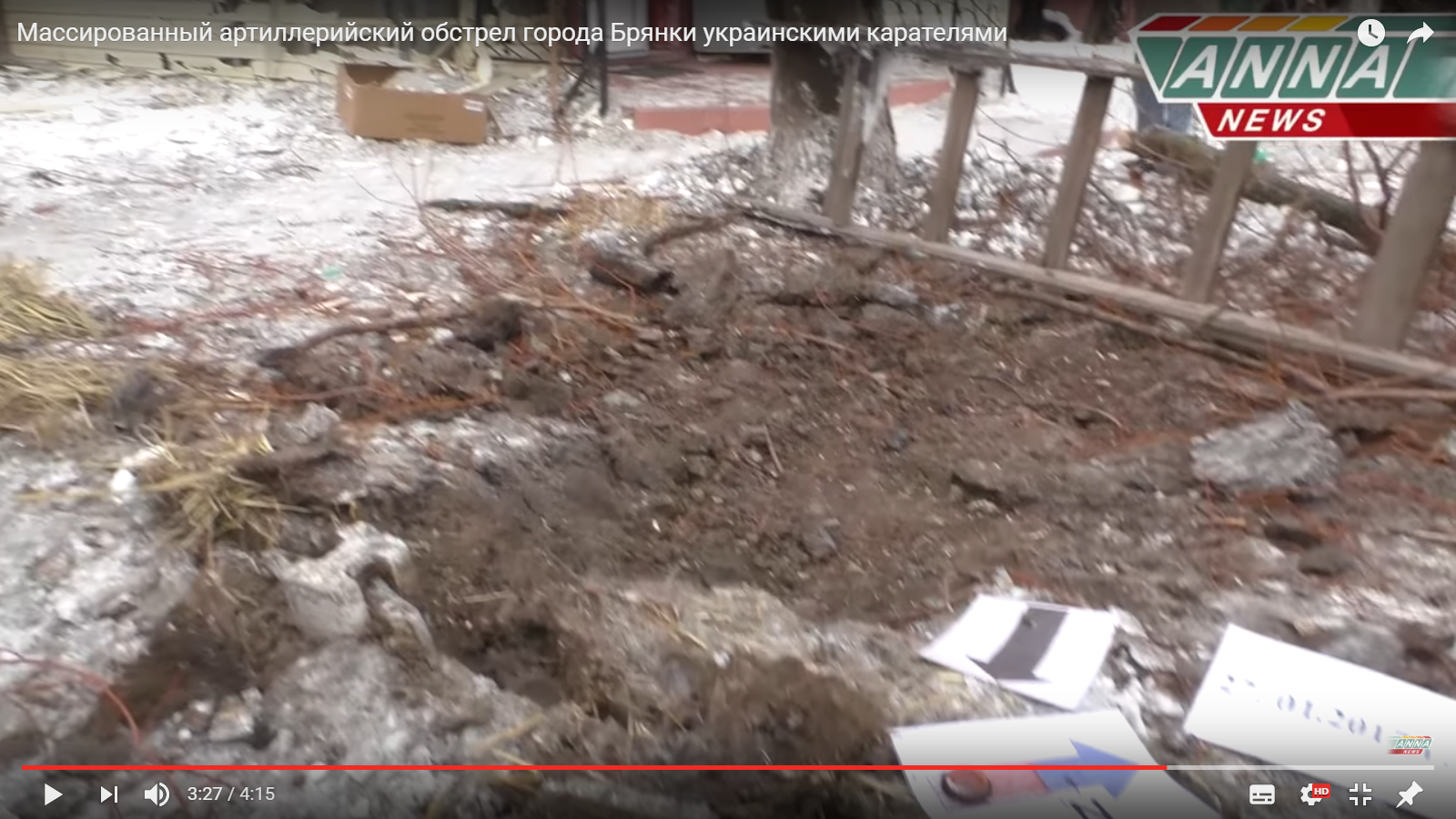 But, despite the small size of the crater, the speaker of “Luhansk People’s Republic (LPR)” terrorist organization Andrei Marochko asserts that it was a 152mm artillery shell that impacted here. In this case, the militants are trying to mislead viewers by voicing the theories suitable for propaganda. 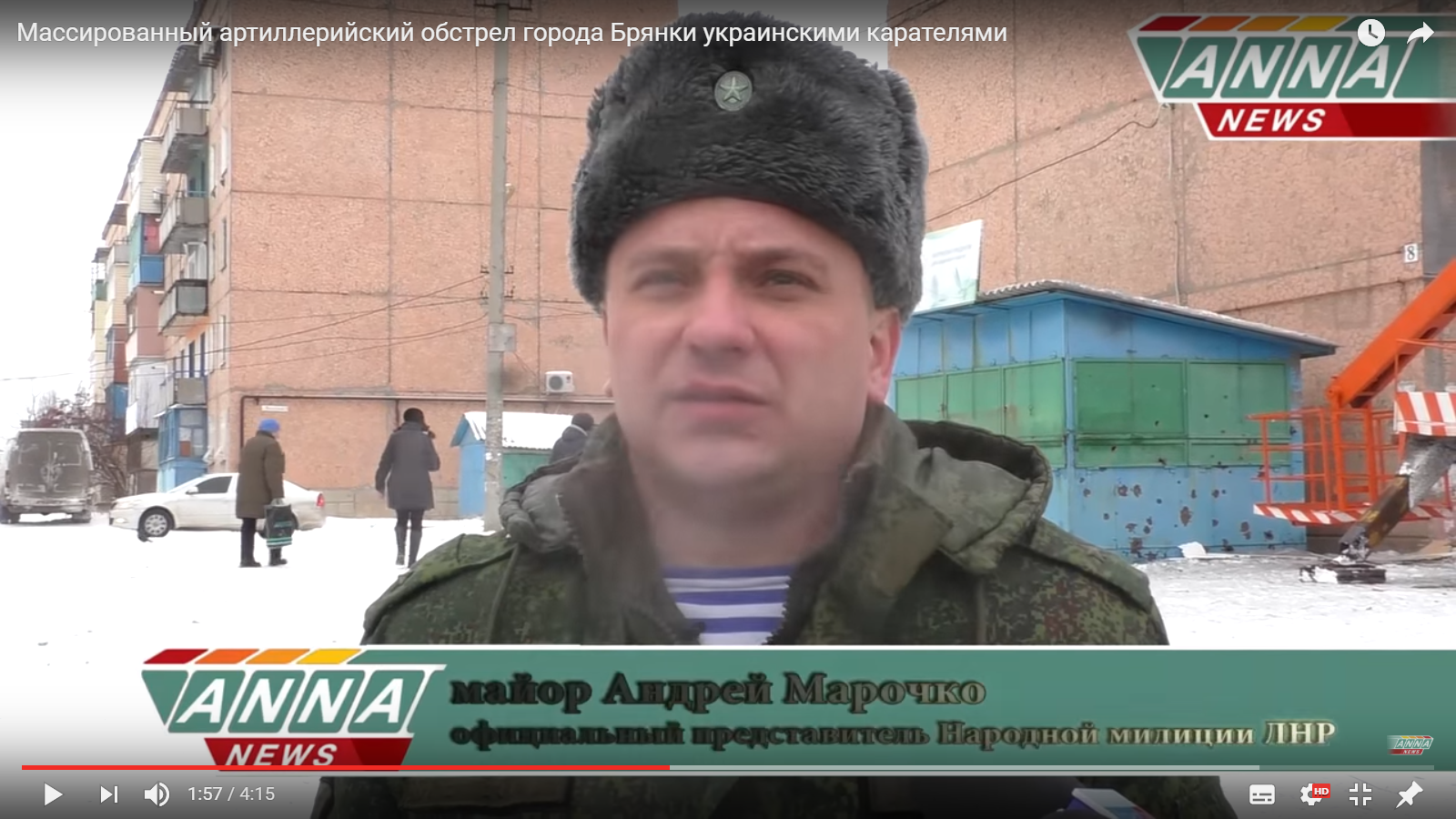 Notably, Russian officers from Joint Centre for Ceasefire Control and Coordination (JCCC) constantly participate in propaganda performances, just like it was in Debaltseve shelling. This means that Russian officers perform not only reconnaissance, but also propaganda tasks, and their presence in the occupied territory is legitimized by JCCC. 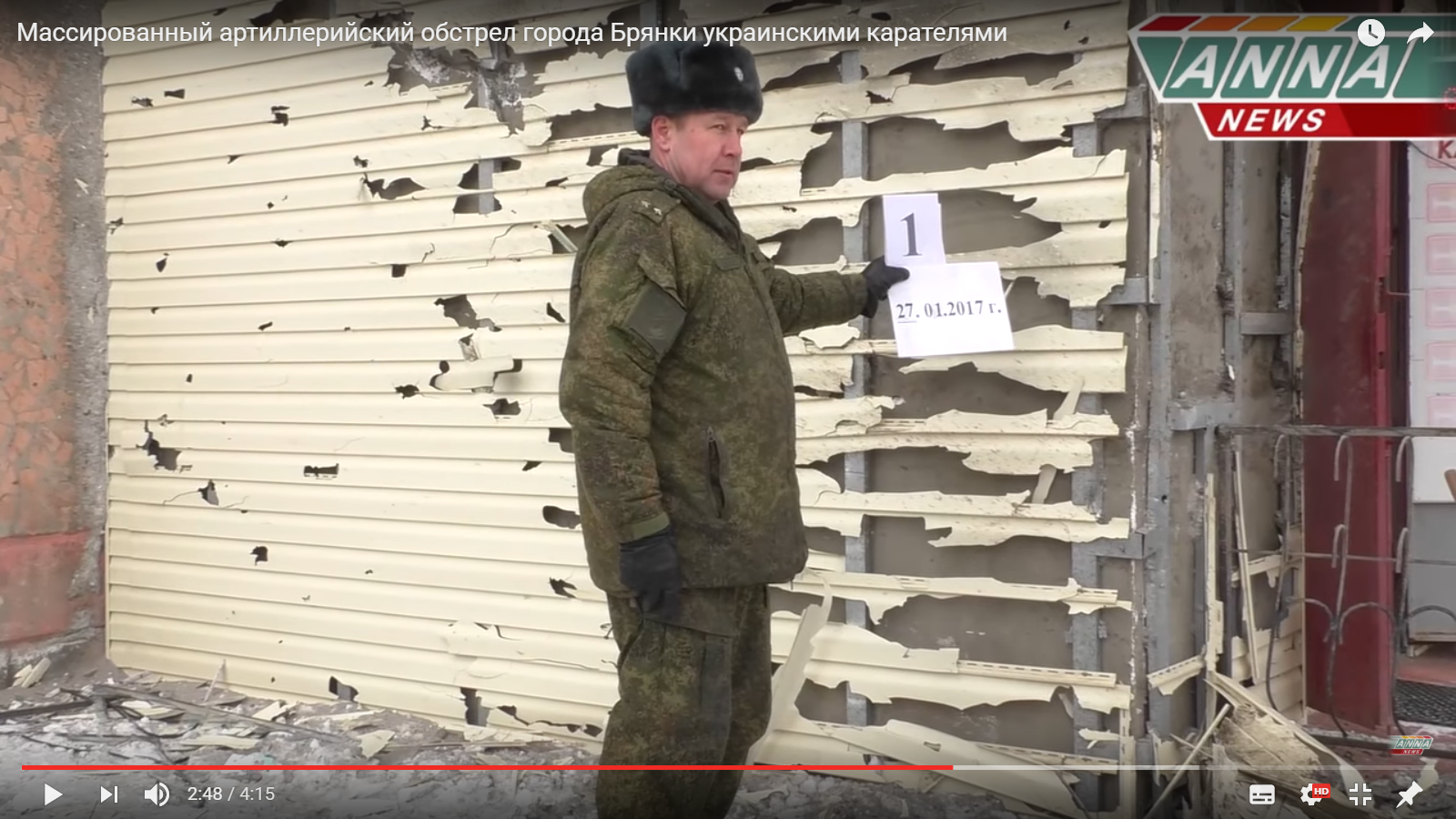 Another important detail is that apartment building 8 covers the point of impact from the west, so there is no chance the shell could come from Ukrainian Army positions. But Russian propaganda is not interested in facts. The scene has to contain more drama, so some “weepers” were brought out, imploring Russia to save them from the “Kyiv junta”. 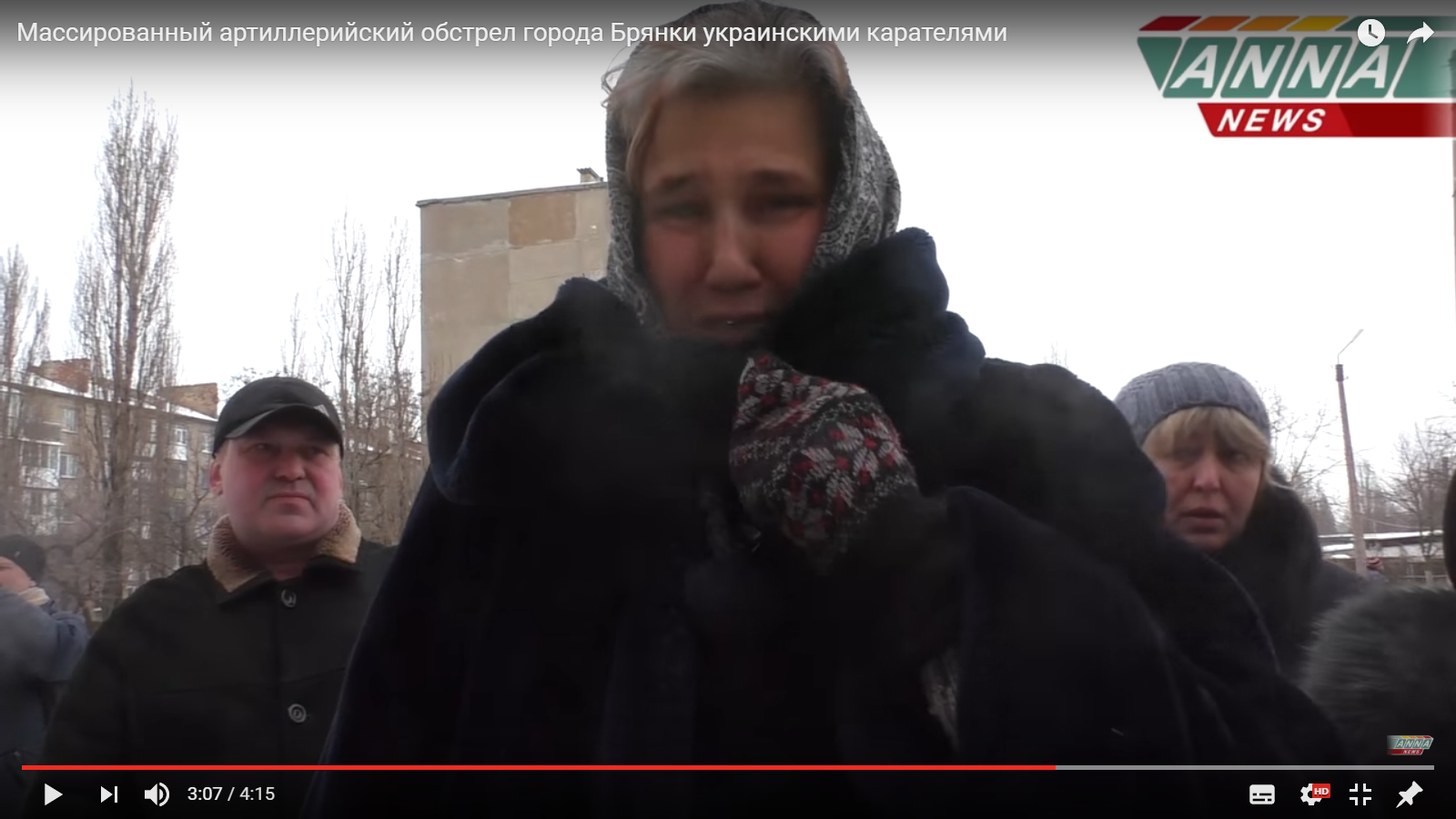 The escalation in Avdiivka and in other areas, constant provocative shelling of Ukrainian Army positions, conducted by Russian militants from residential areas, and shelling of civilians indicate that Russia plans to increase the intensity of armed hostilities. And, when provocative shelling of Ukrainian positions doesn’t bring results, because Ukrainian Army does not fire back at residential districts, the propagandists fall back on staged shelling, presenting it as “junta punishment operations”.

This publication was prepared by  Dmitriy K. and Andrew Lysytskiy specially for InformNapalm, translated by Evgeniy Kalashnik, edited by Max Alginin

One Response to “Russia needs staged shelling of the occupied territory for conflict escalation. Analysis of Bryanka shelling.”