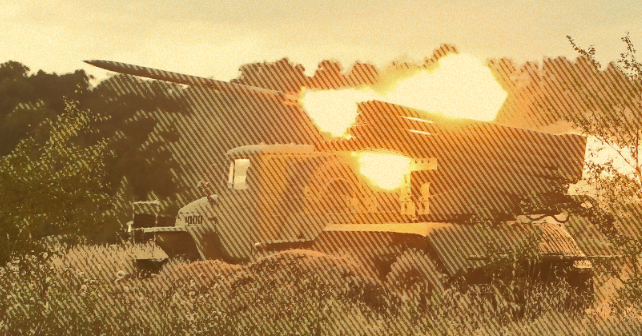 For two days in a row Russian hybrid army has been massively shelling Avdiivka, Ukraine in violation of the Minsk agreements. Russian forces have been using cannon artillery, mortars and MLRSs. Eyewitnesses upload and share videos that show BM-21 Grad MLRS rockets launching from the area in close proximity to dense residential communities of Donetsk – a large city in Ukraine that has been under control of Russian-terrorist forces since April 2014. Occupation troops resort to their usual human shield tactics fully aware that Ukrainian Army would not strike back with artillery if this endangers residential areas.

OSINT investigators of InformNapalm volunteer intelligence community have analyzed one of the videos to define the position of the spotted MRLS and its firing direction. The video captured BM-21 Grad MLRS firing rockets. It was filmed on January 31, 2017 at 10:40 AM (local time). According to eyewitnesses, it was the sixth “pack” (1 pack = 40 rockets) fired by Russian troops from this position starting from 01/30/2017. InformNapalm volunteers have discovered that rockets were fired from the spot located in Budionivsky District of Donetsk – between the ring road and wood line, 250 meters from Sigma superstore and 450 meters from Kozachok kindergarten located in Donsky District of Donetsk. Geolocation and georeference is shown in the screenshot below (click to enlarge). Exclamation point marker indicates the MLRS position, the red arrow shows the firing direction. 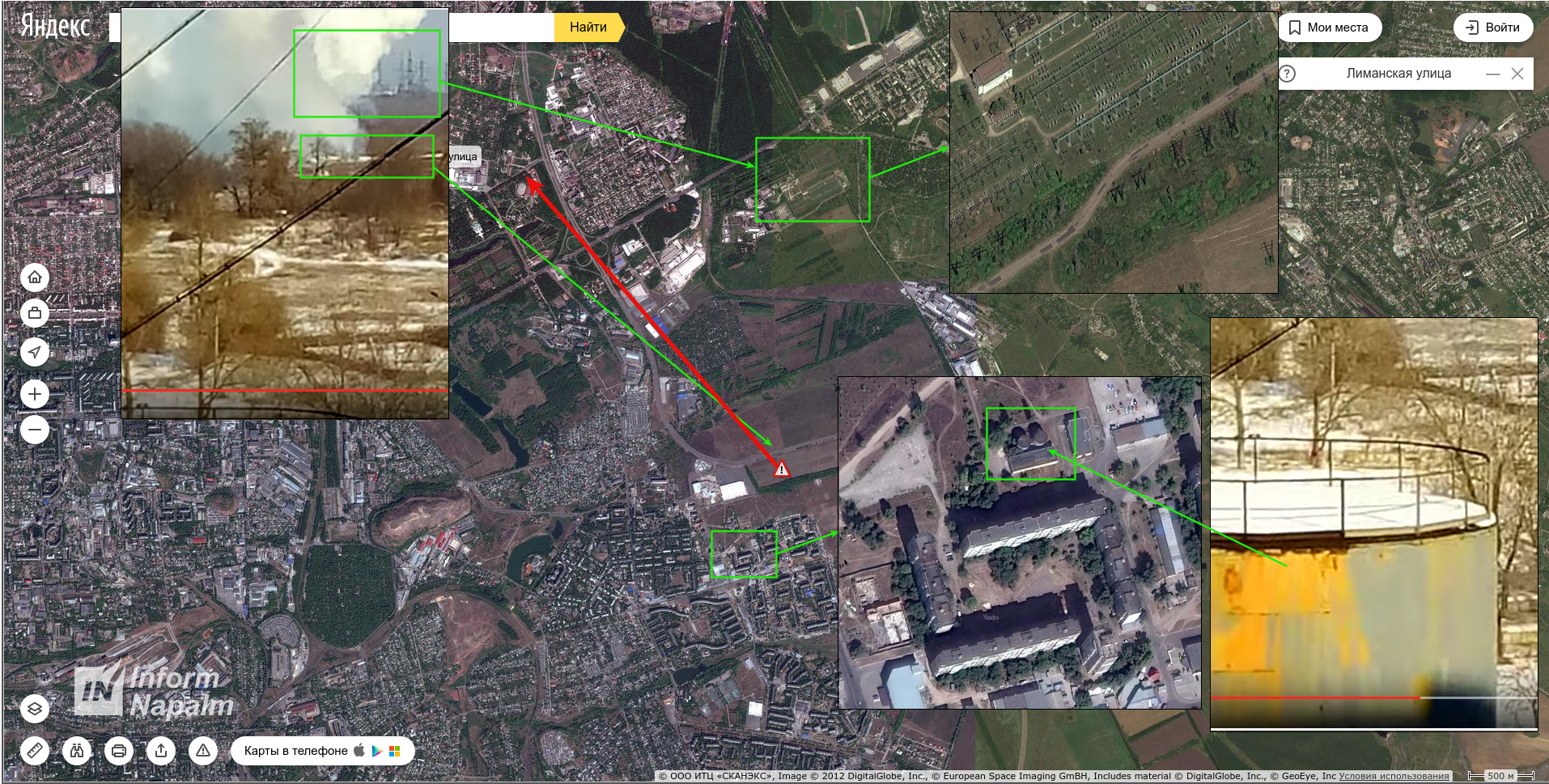 Avdiivka that endured intense shelling in the recent days is located 16.5 kilometers from the firing position along the indicated direction of the shooting. The maximum range of 9M22 \ 9M22U high-explosive fragmentation rocket projectile is 20.4 kilometers. 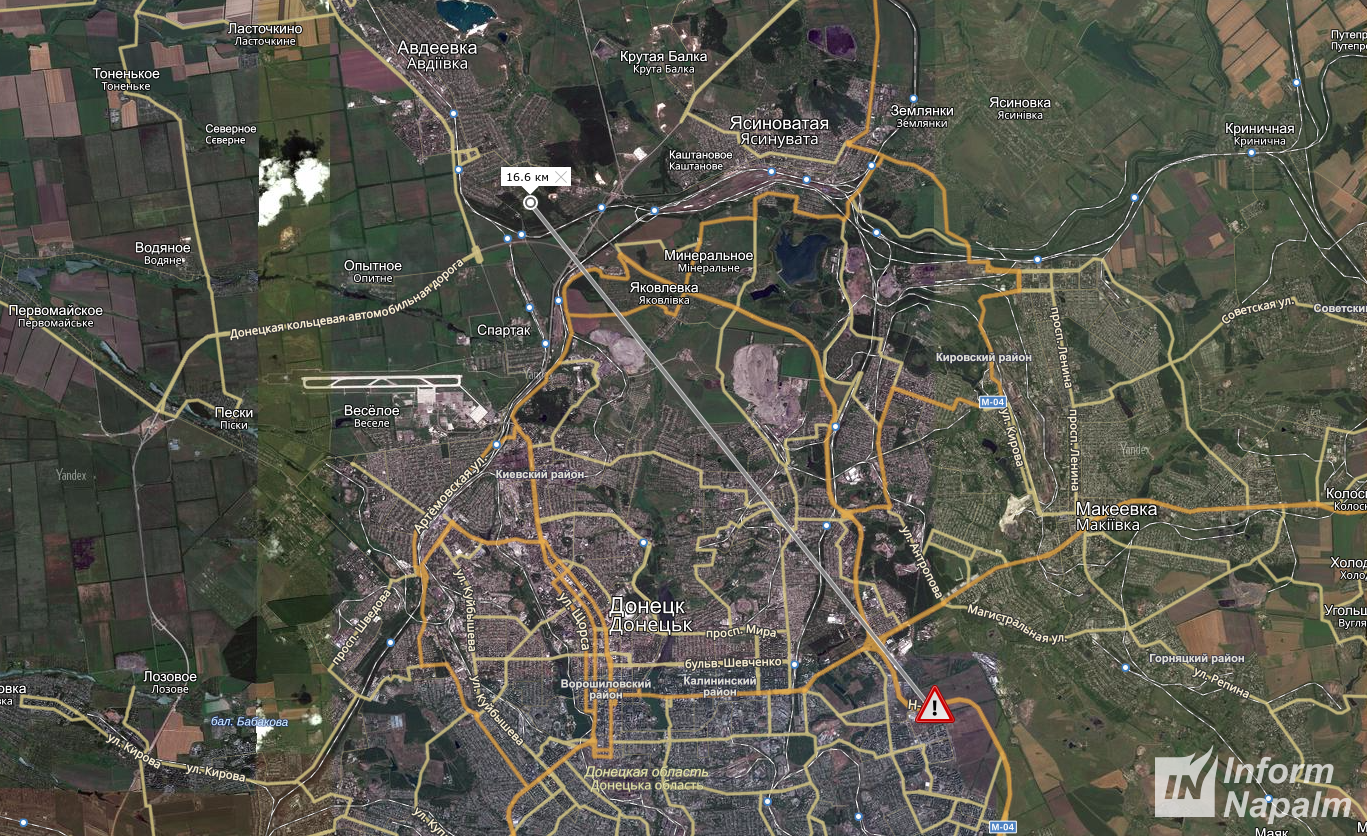 Russian occupation forces continue shelling Avdiivka with BM-21 Grad MLRS from the same firing position in Budionivsky District of occupied Donetsk, Ukraine. The fact of shelling is confirmed by the video shared by eyewitnesses (see below). The video was filmed from the building located on Nezalezhnosti Street.

Apparently, Russian hybrid forces follow the advice of their leader – President Putin, who clearly explained the war tactics employed in Donbas: “Let’s see anyone from the military dare shoot at their own people who we will be behind – not in front but behind. Let them try to shoot at women and children”. In violation of the Minsk agreements the Russian hybrid forces continue using heavy weapons (that were supposed to be removed from the contact line two years ago) and employ barbaric terrorist tactics of warfare, firing from residential areas.