Is Russia paving the way for admitting its “polite” military invasion of Ukraine? 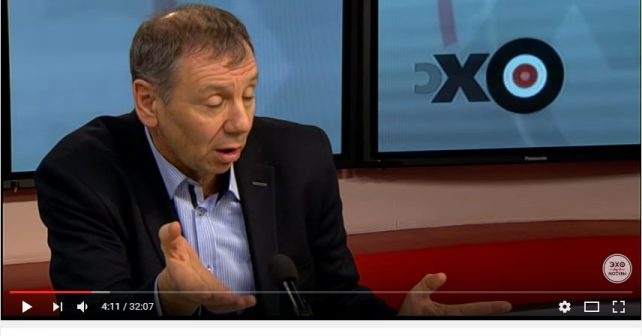 Russia has changed its official stance on many issues many times. One can hardly expect anything else from a country whose past is rewritten by every new ruler. Presumably, we’ve encountered a situation when Russia will start admitting its involvement in the war against Ukraine. However, they will be doing it gradually and with the familiar cynicism.

Putin has been telling stories about the local “people’s militia” in Crimea with the uniform and equipment purchased from a “surplus shop” since the very onset of war against Ukraine. However, he admitted later that the Ukrainian military units were blocked and disarmed by Russia’s regular forces; InformNapalm—international intelligence community—covered details of the Crimea occupation operation in its OSINT studies a number of times [1], [2].

Gradually, Russian “political technologists” seem to start paving the way for the admission of the Russian military incursion in Ukraine. Local separatists, numerous Russian mercenaries, and Novorossia advocates have always been aware of the presence of the Russian regular troops and equipment. They’ve even coined a special term — Northerly Wind — to refer to this.

Russians — and Soviets before them — frequently replace conventional terms with some oblique euphemisms or come up with an altogether new terms. For instance, all Soviet Union’s military operations abroad were referred to as “brotherly assistance” or “international duty” in spite of their being acts of aggression and intervention in fact.

Military equipment supply to Donbas is referred to as the Voentorg (“military surplus shop”); Russian troops are known as Otpuskniki (“vacationers”) or Ikhtamnet (“they-are-not-there”) etc. This substitution of terms is a fine psychological move. For instance, the Russian media pushed the term “little green men” upon us, and we have accepted this euphemism instead of referring to the Russian Army. Is it mere coincidence or a result of the conscious effort of professional media psychologists?

Putin’s jocular reference to rumors of Donald Trump’s adventures in Moscow is a recent example of such substitutions. The word “prostitute” would sound too gross, direct and confrontational, but a comment about “girls with reduced social responsibility” made the media almost ecstatically happy. So, is it mere coincidence or yet another result of the conscious effort of professional media psychologists?

However, let us get back to the Russians’ attempts to make overtures for the admission of the fact of involvement of the Russian military in the War in Donbas. Political scientist Sergey Markov made a statement on Osoboye Mneniye show on Echo of Moscow radio. His style of speech is somewhat reminiscent of Zhirinovsky at the early stage of his political career. They play similar roles by voicing ideas that have been hatched by the Kremlin, but are too outrageous to be officially announced.

“Yeah, I believe there are “surplus shop” supplies, there are some “vacationers”. According to my sources, there were two “vacations” of one week each. Do you remember that critical moment with the encirclement at Ilovaisk? Indeed, there were some vacationers there, who, so to say, contributed to tightening the noose at Ilovaisk, and they also helped later with the encirclement at Debaltseve. Otherwise, everything has been done by the Donetsk People’s Republic (DPR) and Luhansk People’s Republic (LPR) army which Stockholm Institute of Strategic Studies ranked, I believe, fifth or sixth in Europe in terms of its potential.”

One can readily notice the euphemisms, such as “vacationers” or “surplus shop”. Markov effectively admits the participation of the Russian military in the war against Ukraine in both Ilovaisk and Debaltseve. So, Russians are trying to console us instead of admitting the fact of the aggression: Yes, there was some involvement but only twice. And “just a bit” doesn’t count.

Russian agitprop might gradually move to such an interpretation of this war with time. For the first three years, Russians kept demanding proofs (“Where’s the evidence?!”) However, the rhetoric can change gradually along the lines of their being unable to stand aloof and having to intervene twice. Merely twice. Many Western partners would even be glad to “accept” this version.

GRU special forces soldiers Aleksandr Aleksandrov and Yevgeniy Yerofeyev were captured on May 16, 2015, long after the Battle of Debaltseve. Russian Army major Vladimir Starkov was taken captive in summer 2015, also long after Debaltseve.

InformNapalm analysts have been observing activities of Russian troops in Ukraine from the very beginning of the war until now.

In addition to the regular infantry, there is regular technical military personnel deployed to Donbas on a permanent basis to maintain sophisticated equipment in service only with the Russian Army.

It is important for Ukraine to steal initiative at a right moment and demonstrate their permanent presence. Interestingly, it was after the presentation of our group’s materials to the NATO and the OSCE that LPR and DPR propagandists became more active trying to discredit investigations pursued by the Ukrainian volunteers.

This publication was prepared by Anton Pavlushko, translated by Oleksandr Ivanov, edited by Artem Velichko

No Responses to “Is Russia paving the way for admitting its “polite” military invasion of Ukraine?”