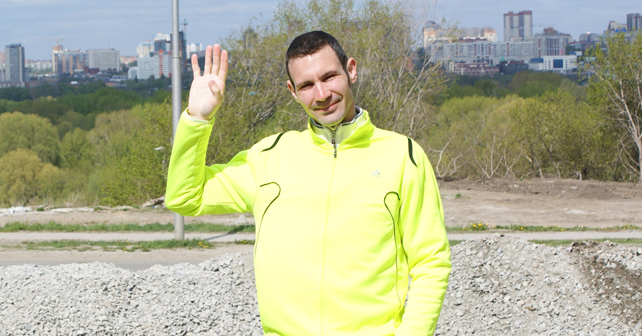 Over the period from 2014 to 2017, there have been more than 135 anonymous calls about bombs allegedly planted in the Kyiv subway. Only in 2016, in Kyiv alone, local law enforcement agencies received more than 300 anonymous threats of explosives planted at strategic and public facilities. These included subway stations, administrative buildings, schools, and restaurants. In some cases, hoax callers were quickly found. Ukrainian criminal code could be applied if they were citizens of Ukraine. But many hoax threats have been coming from the territory of Russia. One of the most active hoaxers is Alexander Aksinenko, a resident of Novosibirsk and a citizen of the Russian Federation and Israel. He does not hide his and even boasts about his terrorist activity in public. The hoax terrorist is sure of his impunity, because after searches in his apartment in 2014 at the request of the Ukrainian Security Service (SBU) in connection to an offence under Article 205 of the Criminal Code of the Russian Federation, he received only encouragement from the Russian Federal Security Service (FSB) officers and a recommendation “to keep up the good work”.

Publicly, Alexander Aksinenko coquettishly writes that following the FSB searches he had “very interesting and meaningful conversations with various people genuinely concerned with the events in the neighboring country”, whose details are “state secrets”. (archive).

The hacking of Aksinenko’s mailbox by the UCA and CyberHunta hacktivists sheds more light on this matter: he received a carte blanche for his activities from the FSB. 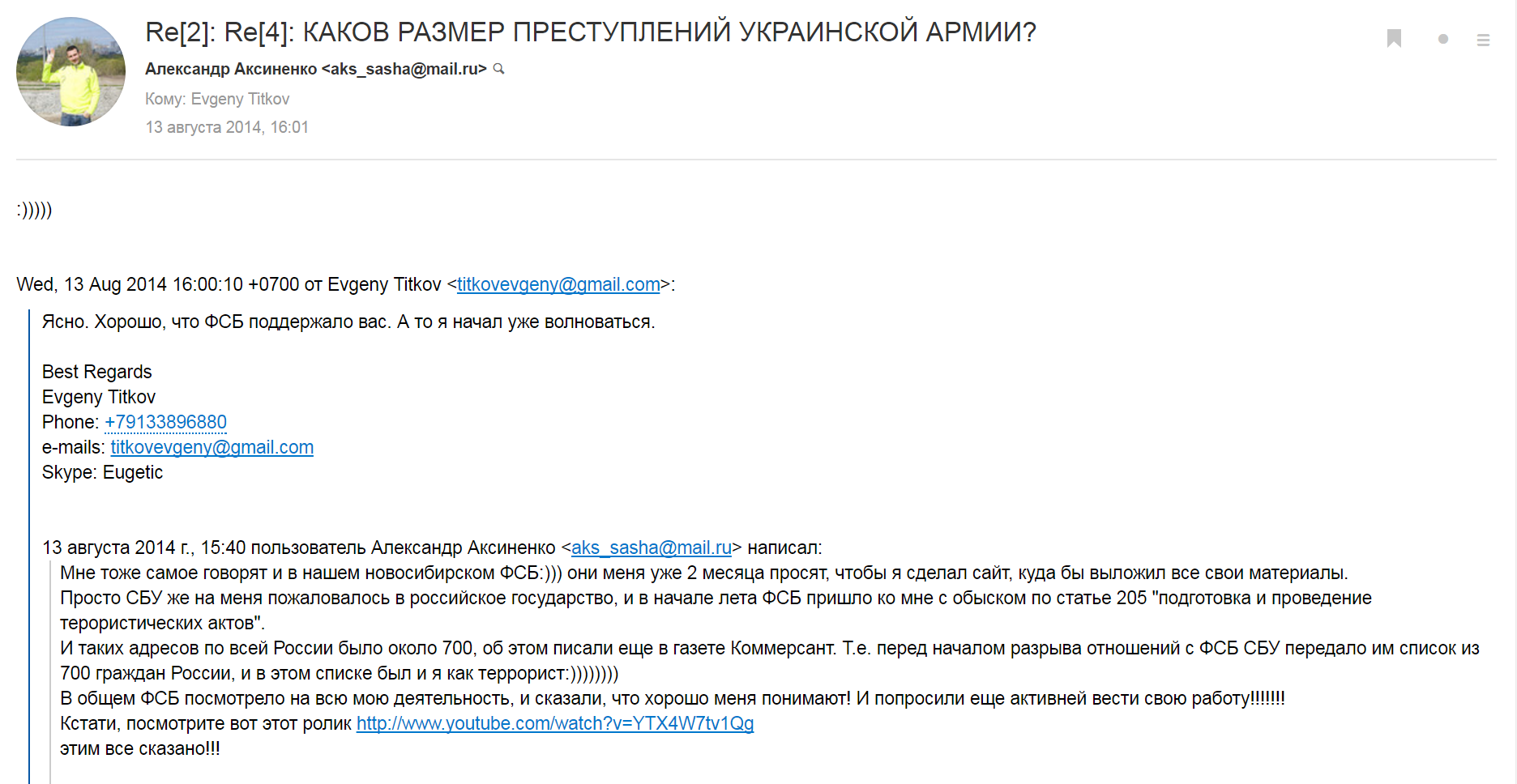 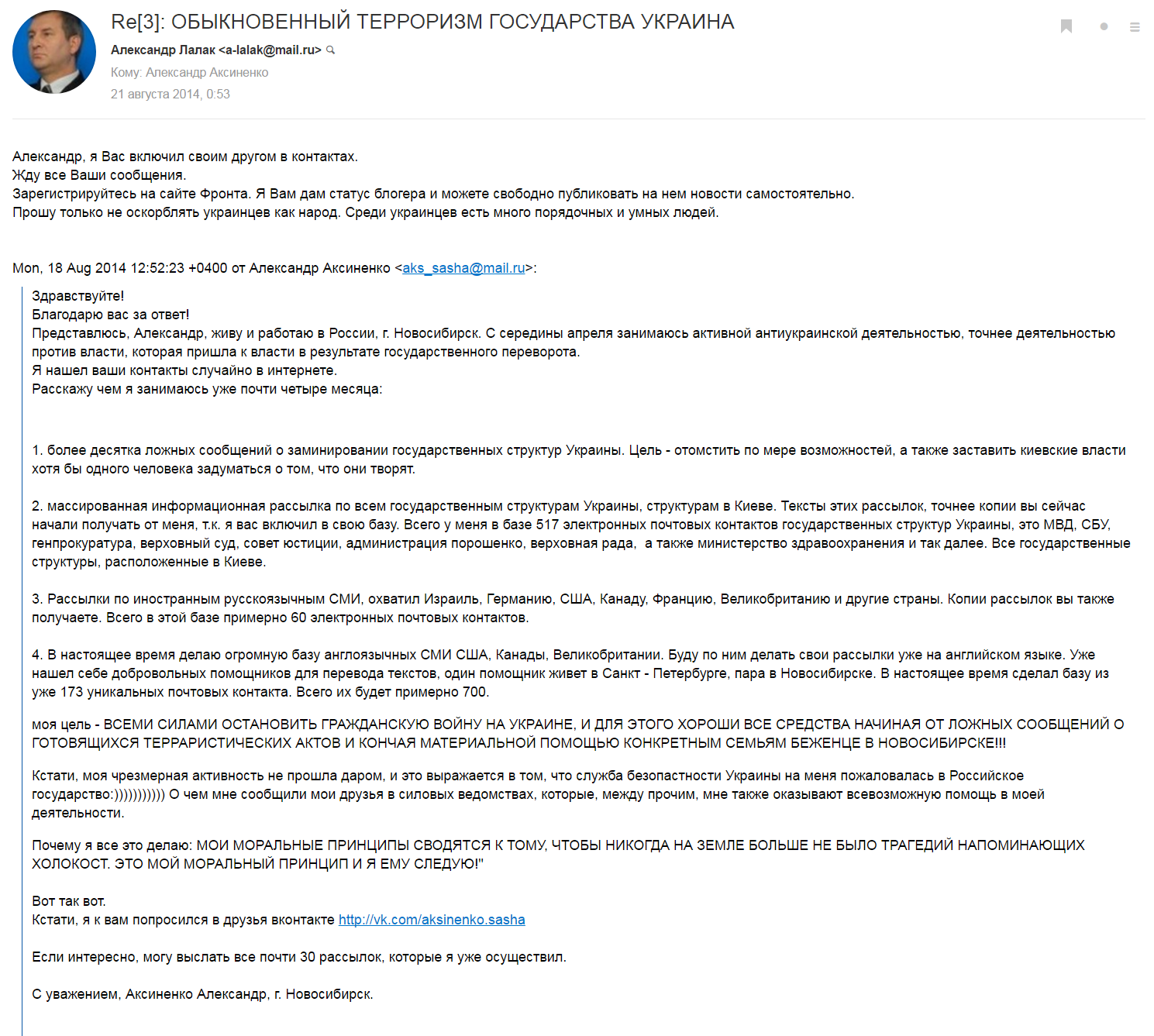 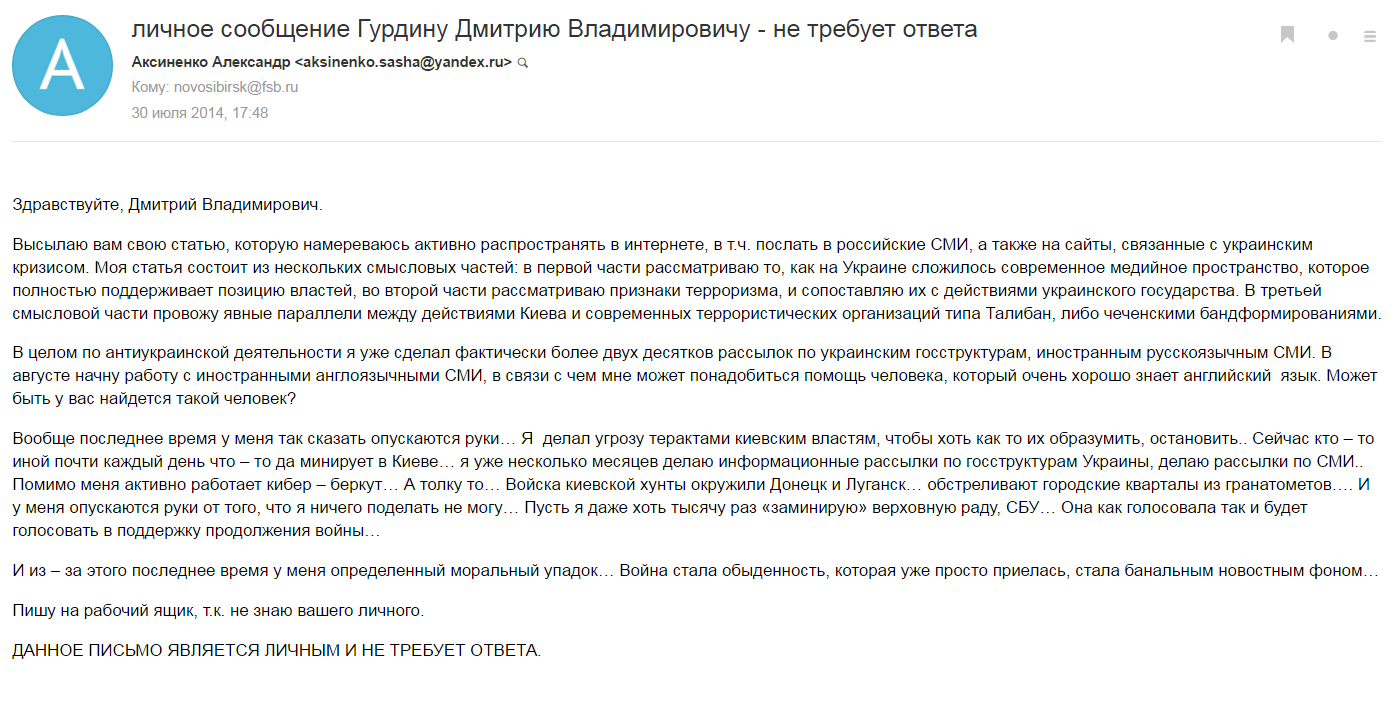 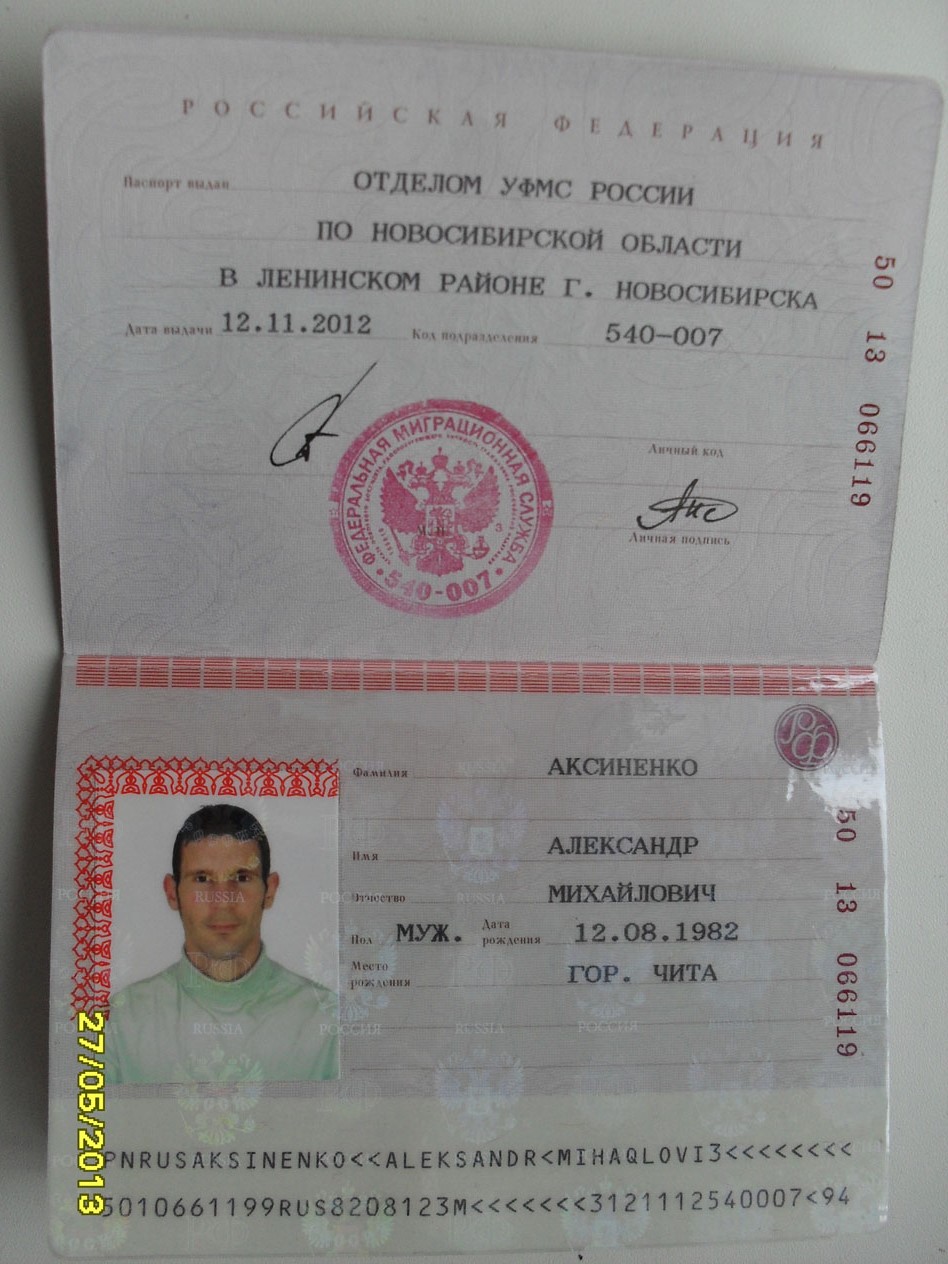 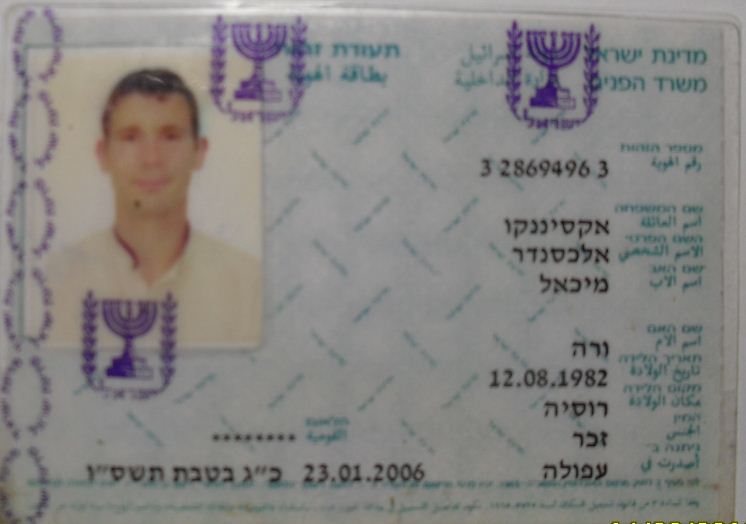 Apart from planting hoax bombs, Aksinenko in his own way tries to take part in the information warfare, using Google Translate to translate articles about “the civil war in Ukraine” and “Kiev junta” and then spamming foreign journalists and European politicians.

Here is his resume on his site.

On VK social network, he is listed under the name of Alexander Ibrahim Aksinenko (archived VK profile, archived photos: profile photo (archive), Chita, the city of my youth (archive), Voyage to the historical homeland (archive), photos from the wall (archive).

Aksinenko is also very active in spreading threats and hate mail. A search through the hacked mailboxes of terrorists collected by the UCA shows that Aksinenko even sent anonymous messages to the SBU and other organizations from the mailbox “poroshenko.petr1@mail.ru” that he set up specifically for this purpose. In the messages, he claimed that he personally organized the assassinations and planting bombs in the cars of Ukrainian intelligence and security officers: SBU Colonel Alexander Haraberyush, deputy head of the Counterintelligence department of Donetsk Oblast (killed on March 31, 2017), SBU Colonel Yuri Vozny (killed on June 27, 2017), and Colonel Maxim Shapoval, an officer of the Chief Directorate of Intelligence of the Ministry of Defense of Ukraine (killed on June 27, 2017). In his messages, Aksinenko also threatens the family of the SBU ex-head Valentin Nalyvaichenko, whom he still considers “the top guy”.

It took both an open source intelligence effort and access to his private mailbox to reliably establish that the mailbox used to send out threats belonged to Aksinenko. The number indicated as a contact to restore the password to the mailbox is +7 (913) 389 – ** – **.

This same telephone number is published in the Contacts section on aksinenko.ru web site (archive). The complete number is +7 913 389 36 53. 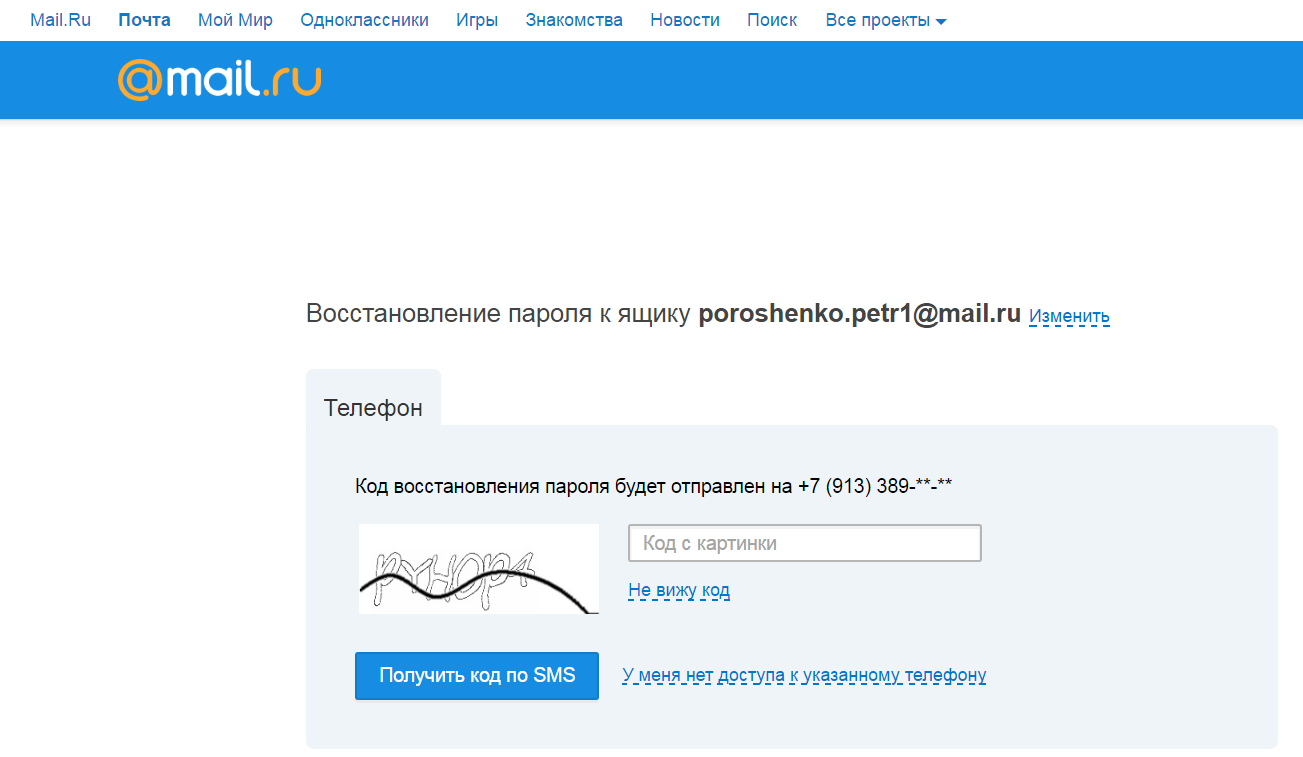 Thus, we have established that the Russian FSB supports the activities of a hoaxer and information terrorist, who has made repeated threats against Ukrainian infrastructure. The leadership of the Russian Federation is interested in supporting terrorist activities against Ukraine, which explains the absence of any moves to curb such illegal activities.

However, we wonder how Israel will react to Aksinenko’s activity, since he also holds Israeli citizenship. The Israeli law enforcement agencies are known for their tough stance towards terrorists. We believe that a person who constantly threatens Kyiv with terrorist acts, should not be allowed to attend the events of the Israeli Cultural Center in Novosibirsk that represents the Embassy of Israel. We hope that this information will be useful for the Israeli side in terms of curbing the unlawful actions of a citizen enjoying the protection of Russian intelligence and security agencies. 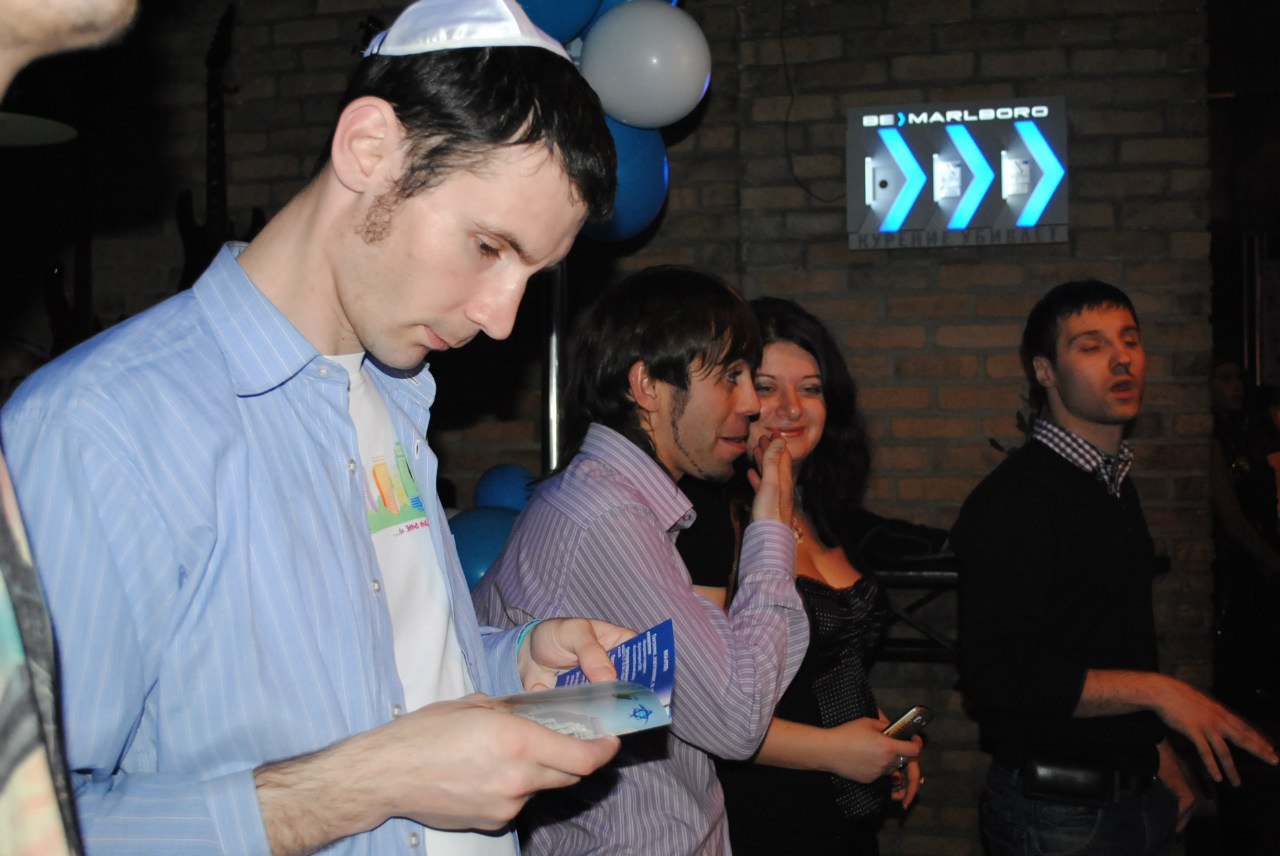 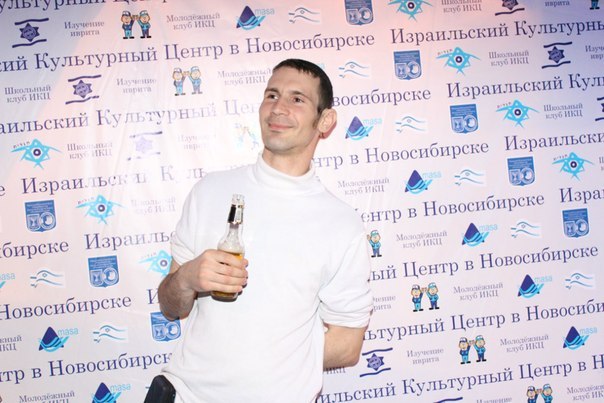 Evidence for this investigation was exclusively provided to InformNapalm by the hacktivists of the Ukrainian Cyber Alliance. InformNapalm Community bears no responsibility for the sources and origin of the data. We analyze and supplement the materials based on open source intelligence.