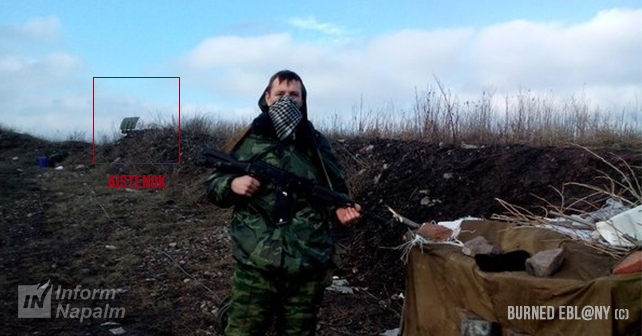 A long trail of clues that helped to reveal several secret deliveries of Russian military equipment to Donbas was discovered after one of our volunteers had found a short comment in VK social network. Russian militant wrote: “Got burned, motherf@ckers” to the post made by the Press Service of the Russian Ministry of Defense. This comment became the first puzzle fragment that inspired our team to start looking for connections between militants and led us to another piece of Russian military equipment in Donbas – Zoopark-1 counter-battery radar.

Egorov and Buslaev took photos in the passenger railway depot in Donetsk, close to Spartak village. We circled in red the same water tower found on their photos (48.084537, 37.7884895). 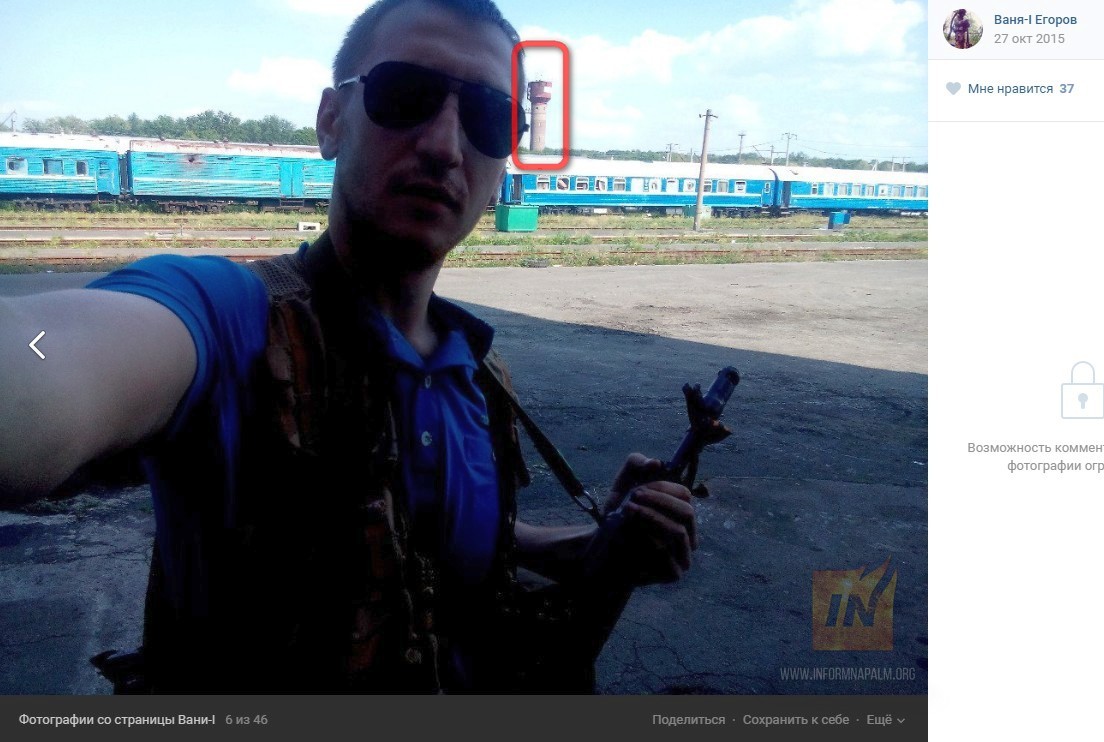 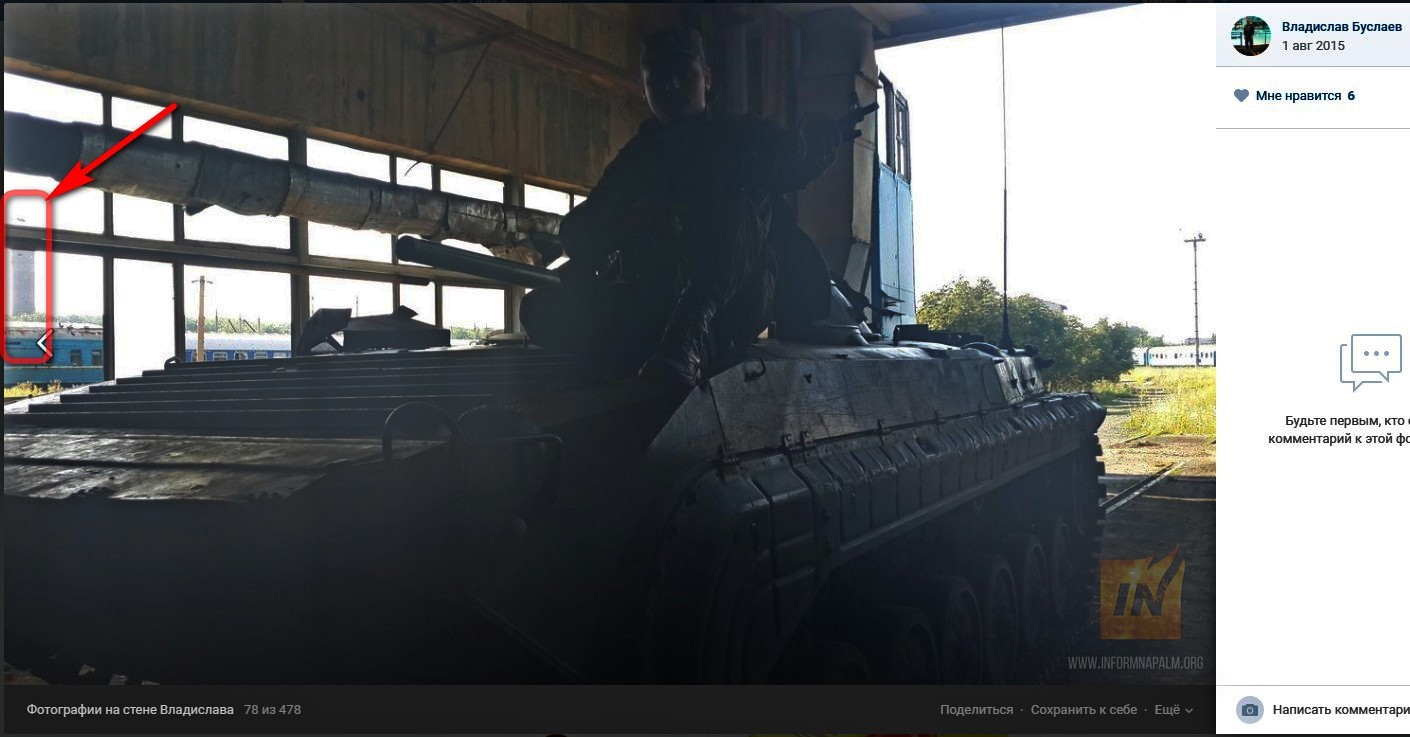 Ivan Egorov has a favorite scarf that he likes to wear. You can see it in the photos below: 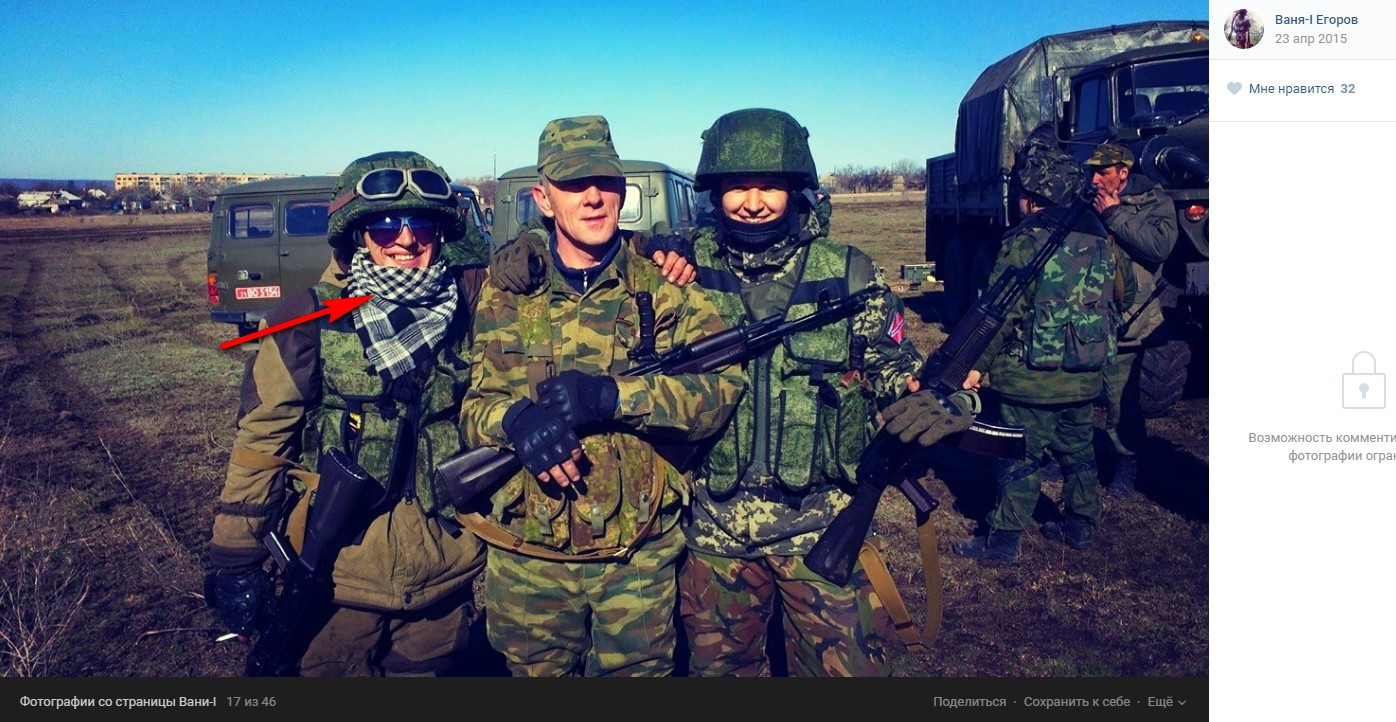 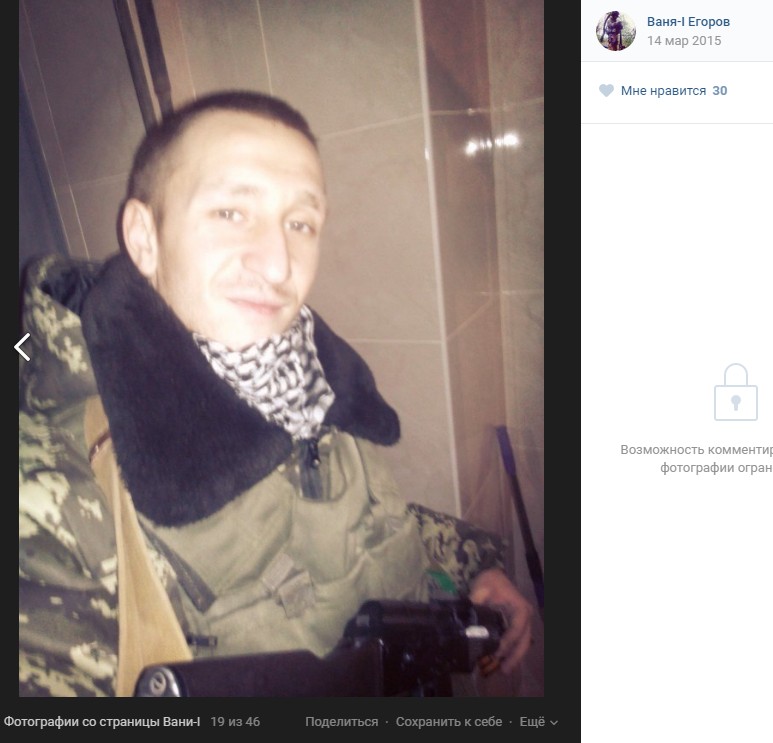 Semi-automated data collection system UKROPalantir shows that by now Egorov has already deleted some of the previously posted photos. Apparently he has realized his commanders might not appreciate that he exposed Russian-made counter-mortar radar 1L271 Aistenok which had been secretly sent to Donbas. 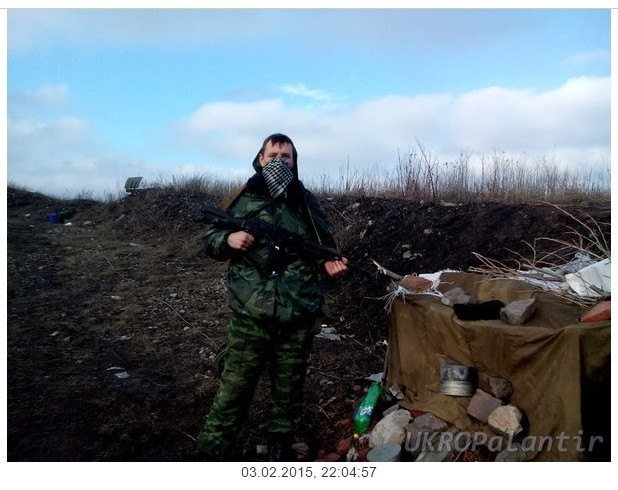 The photo with Aistenok in the background was taken at the old gob pile site. If you take a closer look, you will see behind Egorov the cord reel and cable running from a small hideout to the radar. 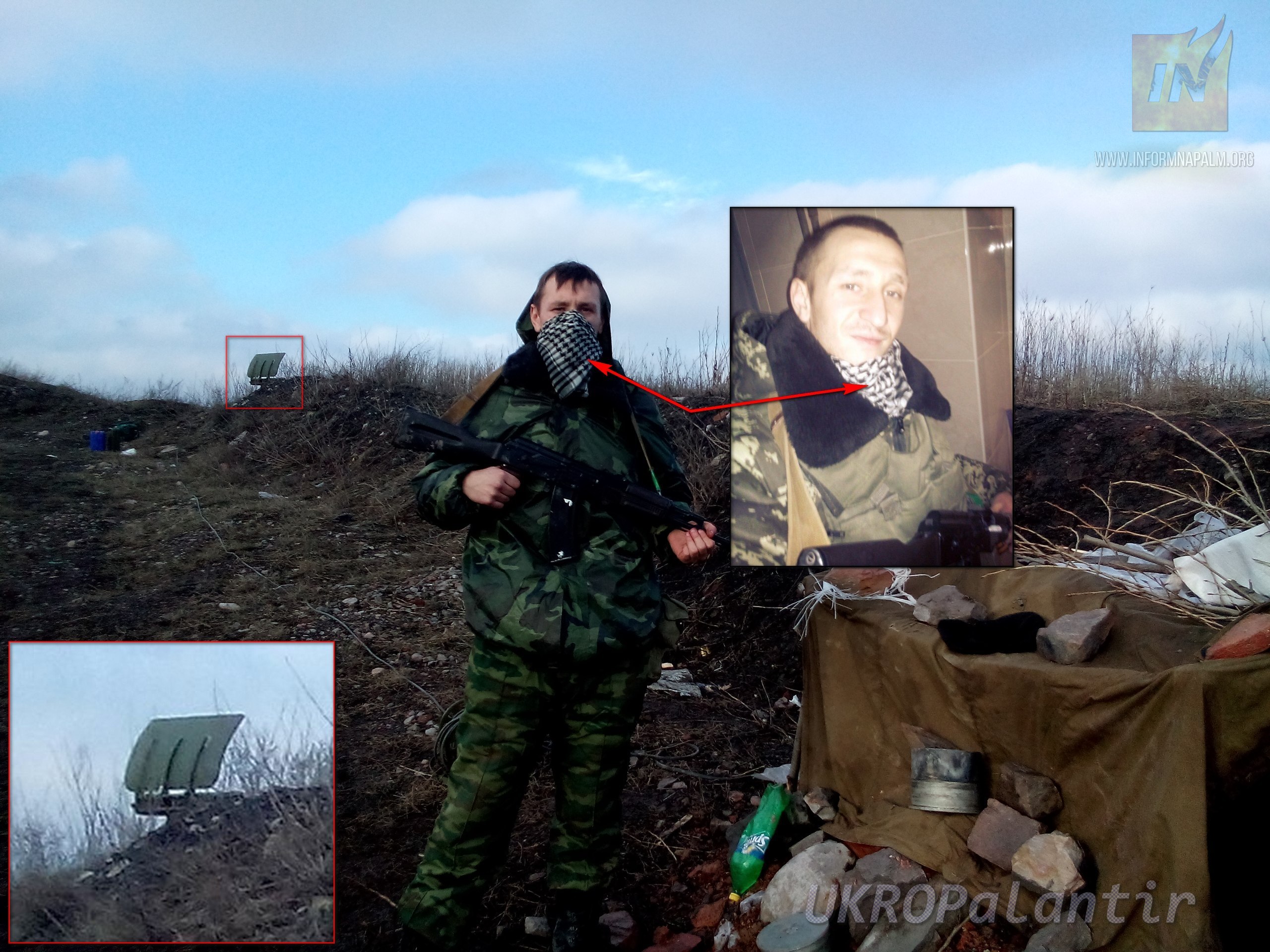 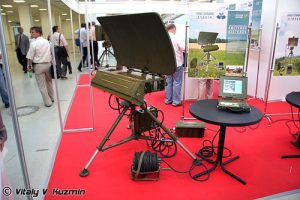 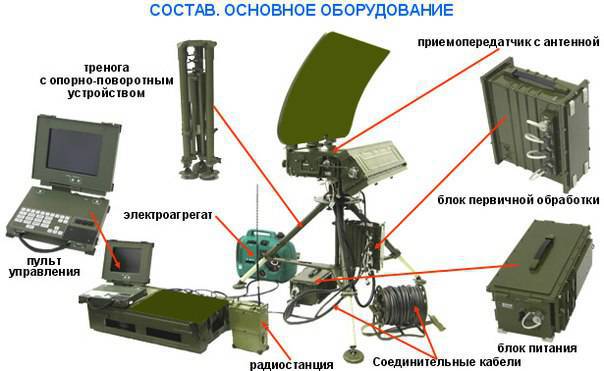 To improve the efficiency of shelling artillery units require special equipment that would allow adjust fire and control aiming results. Another important task is to suppress enemy artillery which also requires special military hardware. Mobile radar systems can detect artillery projectiles, locate enemy guns or ground point of impact. They are used by both self-propelled artillery and mortar detachments.

Aistenok radar system is primarily designed to monitor fire of friendly and enemy artillery. Aistenok can track 81-120 mm mortar shells in flight. It automatically calculates trajectory and projectile parameters while determining the points of launch and landing. This information can be used to fire hostile targets with counter-battery fire and calculate corrections to adjust friendly fire.

1L271 system can also control 122-152 mm caliber artillery shelling (photos in a related article about Zoopark-1 radar coincidentally reveal two 152 mm MSTA-B howitzers hidden in the building). In this mode the radar tracks and calculates the points of shell bursts on the ground, so that artillery can adjust fire to improve aiming.

The third application of 1L271 radar is to detect on-the-ground moving targets of tank type. Enemy position data gathered by the radar can also be transmitted to artillery units for the strike.

In lieu of a conclusion we will quote information published by The Military Review (Russian website):

“Since 2008 1L271 Aistenok radar has been frequently presented at various arms and military equipment shows. However, information on acquisition of these systems by the Russian Army is not available. Curious news related to the system operation appeared several days ago. On January 15 militia of Donetsk People’s Republic allowed OSCE observers to their positions. During this visit different systems were demonstrated to the observers, including Aistenok which is used by militia to detect the shellfire coming from the Ukrainian Armed Forces. Thus, the present conflict can be regarded as the first war in which this new Russian radar system is used.

The details about 1L271 radar supply to DPR are unknown. Plans of the Russian Ministry of Defense with regard to the purchase of these systems for own military units also remain secret. It is entirely possible that the new radar system of reconnaissance and control first should be test-run in real war conditions during the current conflict, and [only] after that they will be purchased for Russia’s Armed Forces.”

Once again it is worth to recall the comment “Got burned, motherf@ckers” to the article posted by the Russian MoD, informing that ground artillery reconnaissance and fire monitoring radar systems Zoopark-1 and Aistenok came into operation of the 1st Tank Army of Russia’s Western Military District.

A small bonus: Screeshot from the video dated January 15, 2015 where Aistenok radar was demonstrated to OSCE SMM in Donetsk. 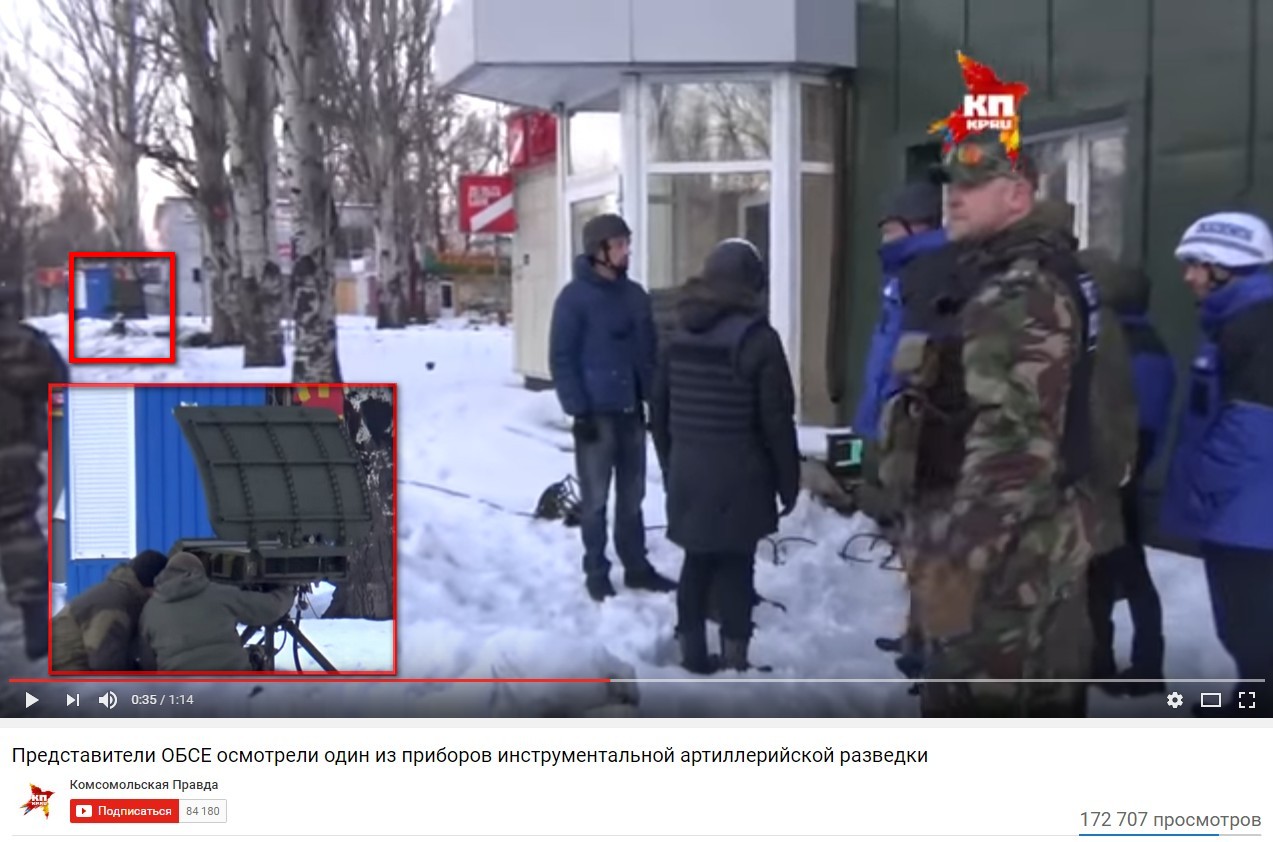