Russian Federation Stirring pro-Russian Separatism in the Republic of Kazakhstan 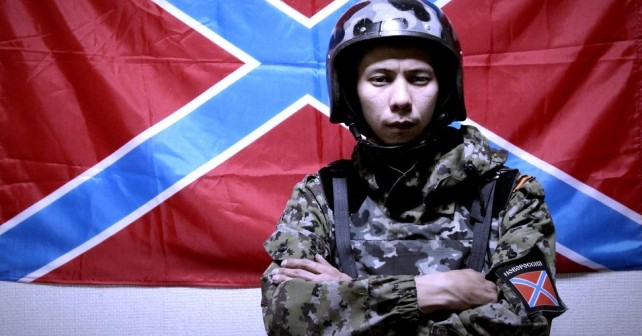 The political and military environment in Kazakhstan is deteriorating due to the efforts of pro-Russian activists.

The activities of pro-Russian movements in Kazakhstan indicate a tremendous growth of the threat to the acting authority, which emerged in the last 18 months. Currently, Kazakhstan is ready for the repeat of the “Crimean scenario”. It could be triggered by domestic problems in the Russian Federation or a sudden change in the state regime of Kazakhstan.

Such threats to Kazakhastan are driven both by its citizens, who are coming home having obtained combat experience in Donbas region, and the increased activities of Cossack groups in Kazakhstan.

The information, gathered by InformNapalm on citizens of Kazakhstan, who fought against Ukrainian Army, details a typical geographical connections: these persons, as a rule, live near the Russian border, where Cossack organizations are active, and where there are large numbers of ethnic Russians. 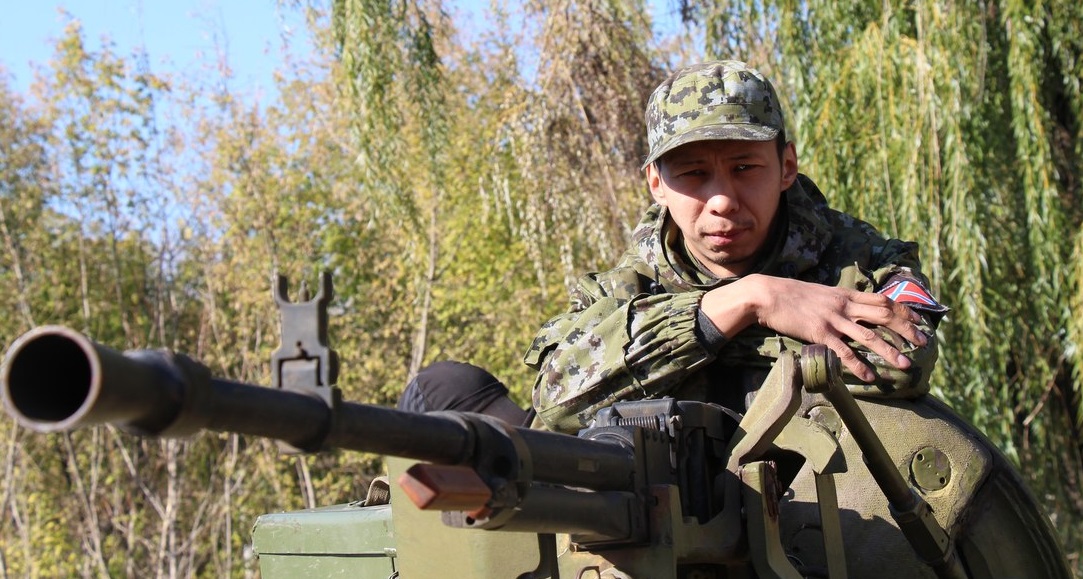 In the photo: a pro-Russian terrorist from Kazakhstan Nurlan Igenov

The analysis of information on Kazakhstan terrorists shows that 26% of them come from East Kazakhstan region (mostly from Ust-Kamenogorsk) and 17% are residents of Almaty. Also participation in the Ukrainian conflict on the pro-Russian side is typical to residents of Astana, Kostanay, Karaganda, Petropavlovsk. 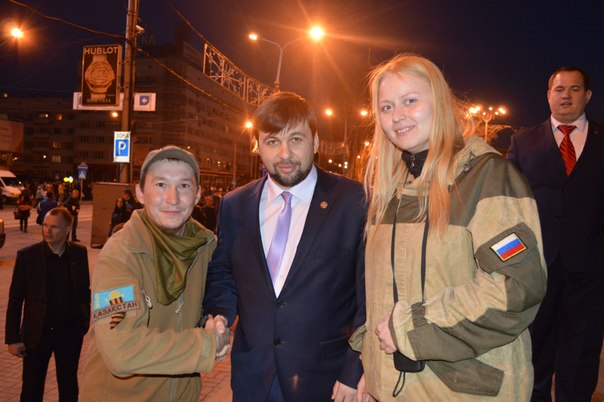 In the photo: Timur K., the terrorist from Kazakhstan with the leader of “Donetsk People’s Republic” Denis Pushylin.

Besides Cossack organizations, there exist other recruiting organizations such as “Russian national unity” (RNU) and several strike ball clubs.

We observe a sufficiently high participation of former soldiers of the Kazakhstan Armed Forces in illegal armed formations in Donbas. Among them we find former special forces troops, specifically Mountain Infantry Battalion (military unit 91678). We estimate that at this time at least 15% of the Kazakhstan Army personnel, including officers, is pro-Russian. It is highly likely that in the case of Kremlin action, whole military units in some regions, for example, in East Kazakhstan Region, could come under the Russian control.

The reliance on Cossack socio-political movement in the territories near Kazakhstan-Russian border is an obvious trend of Russian military-political leaders.

On the 7th of February the inaugural forum of the Coordination Council of Russian, Cossack, and Slavic organizations was held, led by Yuriy Zakharov (Yuriy Zakharov and Asylkhan Artykpaev, the colonel of Kazakhstan Cossack Union, participated in the “Crimean referendum” as observers).

During this forum the issue of electing deputies representing cossacks the Parliament Majilis was discussed, and the adopted resolution states:

Demand to ensure the actual respect of constitutional status of the Russian language and strict adherence to language legislation and to establish the disciplinary measures, up to dismissal, for the officials of all ranks for the violation of laws and the Constitution of the Republic of Kazakhstan. This requirement forces Astana to acknowledge the discrimination of Russian-speaking population and positions the government as the tool for the suppression of the national and patriotic movement in Kazakhstan.

Establish the legal basis for proportional ethnic representation in all branches. This would require making amendments to the Constitution of Kazakhstan, which would contradict the existing norms, would not provide for any special treatment based on sex, ethnicity, social status, or beliefs, but introduce quotas for pro-Russian representatives in legislature.

Transfer Russian drama theaters in all districts of Almaty and Astana as cultural centers under Coordinating Council control, maintaining state budget financing. This article corresponds to the provisions of National security strategy of Russian Federation, that offers to use cultural activities for Russian expansion in the territories of the former Soviet Union.

Allocate time for Coordination Council and Kazakhstan diasporas on state TV channels to promote their life, culture and language. That time ought to be divided taking into account the ethnic representation in specific state regions. The adoption of this article will lead to pro-Russian monopolization of TV broadcasting and content in numerous regions, where the threat of separatism still exists.

Increase up to 30 seats the quota of Kazakhstan public Assembly in the Parliament, with one third of it given to representatives from Coordination Council of Russian, Cossack, and Slavic organizations of Kazakhstan.

Allocate 5 seats for activists of Coordination council in the Senate;

Acknowledge the Cossacks as an ethnicity of Kazakhstan; 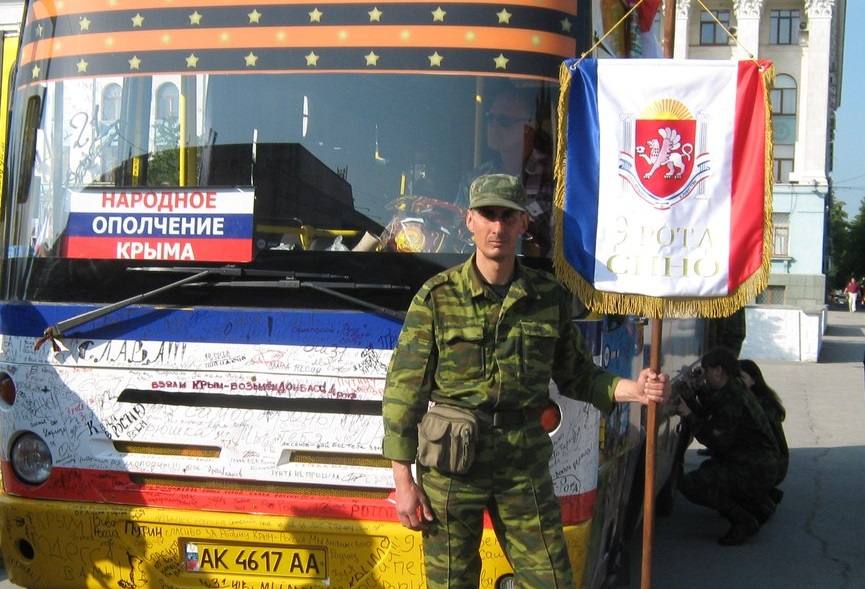 In the photo: the pro-Russian terrorist from Kazakhstan Svyatoslav Golikov. He participated in capturing Verkhovna Rada of Crimea.

The Astana policy did not interfere with Cossack unions’ activities over the past decade, allowing them to transform from cultural organizations into paramilitary ones, promoting a clear pro-Russian position. Some of those organizations took part in the “Crimean scenario” in 2014. These organization question the sovereignty and national identity of Kazakhstan. For example, numerous Cossack  information resources (for instance, “Cossack network”) describe Kazakhstan as “the so-called Kazakhstan state”), and the rhetoric towards Kazakhs is similar to that of used by pro-Russian separatists during the destabilization in Donbas and the attempts to establish the so-called Novorossia.

Currently, Kremlin is trying to intimidate the Kazakhstan government, in order to prevent any action for the elimination of potential threats. This will allow pro-Russian organizations to shore up their positions even further. At the same time the situation in Crimea and Donbas shows that the absence of resistance at the first signs of external interference does not lead to the rejection of aggression, but, on the contrary, brings closer the implementation of the negative scenario.

CC BY 4.0 – Original article written by Vitalij Sokolenko. Upon reuse of the material, an active link to the author and our project is desirable.