“Belarusian peacekeepers” from Kazakhstan. Who was secretly redeployed in Belarus by Russia? 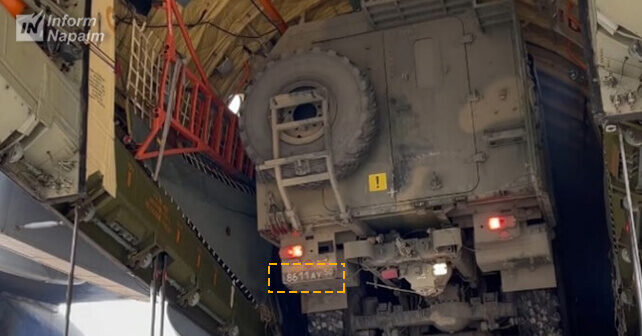 Volunteers of the Belarusian editorial team of InformNapalm international intelligence community spotted the details potentially indicative of a special operation carried out by the Russian Federation. The investigation uncovered potential indications of the covert transfer of Russian units from Kazakhstan to Belarus under the guise of the returning Belarusian troops. The presence of these units in Belarus are likely to be legalized during the Allied Resolve 2022 military exercises to demonstrate Russian forces’ unprecedented speed of deployment and mislead Western analysts about the capabilities of Russia’s army. Read more below:

Viktor Khrenin, Defense Minister of the Republic of Belarus, made an official announcement on January 6 that a peacekeeping company of the 103rd Airborne Brigade had been sent on a mission to Kazakhstan (link, web archive). The peacekeeping company numbers 100 permanent staff and 200 reserve staff (link, web archive). Nevertheless, various media reported that the Belarusian contingent sent to Kazakhstan was 100 to 500 men strong, albeit without providing specific data. According to Khrenin, the troops were sent on January 6 by Russian Ilyushin IL-76 military transport aircraft. A Russian IL-76 with tail number RF-78833 can be seen in the background of the video with his statement.

In addition, five Russian IL-76 aircraft were reported to have been used for the redeployment of Belarusian peacekeepers.

At the same time, there is another video dated January 6, where military equipment with Russian license plates is loaded onto a plane with tail number RA-76638 (link, web archive). It is titled “Video report of the departure of Russian troops to Kazakhstan.” Thus, there is only one IL-76 plane left that the Belarusian peacekeepers could have used for their flight to Kazakhstan. And it would have been enough for a company.

It was only about 2:00 PM on January 8, two days after the announced deployment, that a video report purporting to show the arrival of the Belarusian troops at Zhetigen airfield in Kazakhstan was shown. Interestingly, it was published by Russia’s Defense Ministry rather than that of the Republic of Belarus (link, web archive).

The reason for the delay is that all those Russian airlifters one sees in the video arrived in Kazakhstan on January 8 rather than on January 6, 2022. 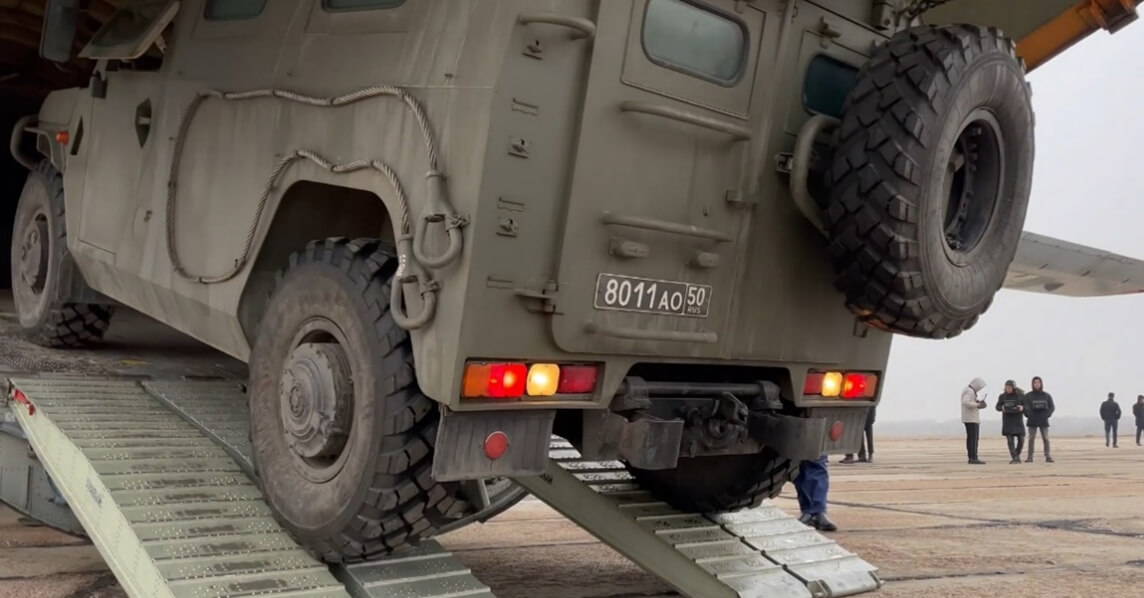 Thus, the servicemen are operating Russian equipment. Whereas shoulder patches with the state flag of the Republic of Belarus are the only sign of their being a part of the Belarusian army because their faces are mostly covered with balaclavas.

On January 9, blogger Aleksandr Kovalenko published a photo where a vehicle without a license plate is standing behind the backs of supposedly Belarusian soldiers (link). 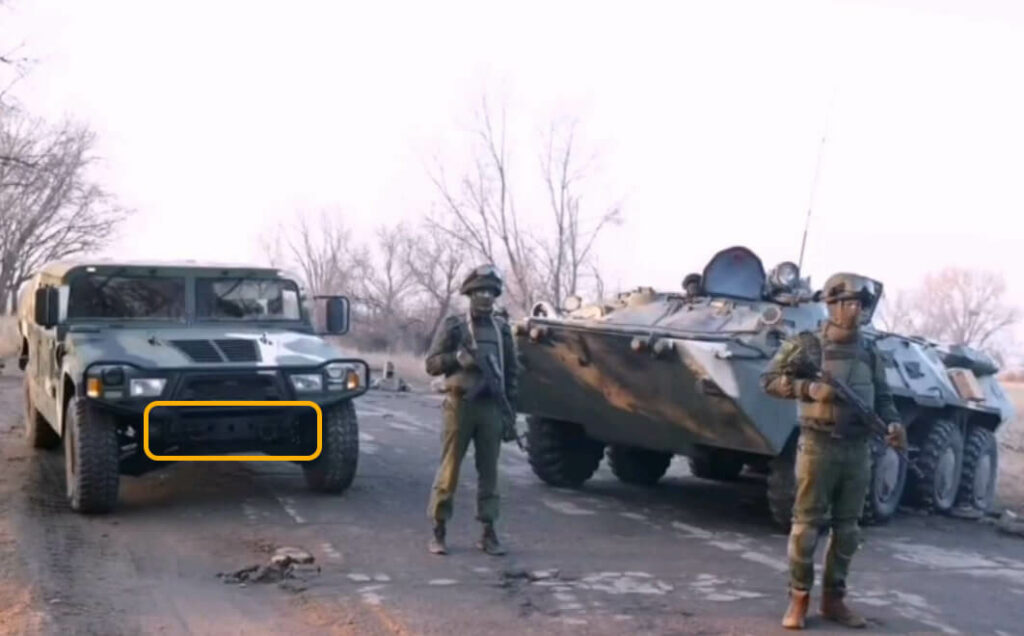 The plates may have been removed to conceal that the vehicle is Russian.

The peacekeepers’ return to Belarus was the next step in Russia’s special operation. According to media reports, Russia provided 10 IL-76 aircraft to this end (link, web archive). This is much more than even the number of airplanes used for the redeployment to Kazakhstan (i. e., 5), not to mention the number of the actually identified aircraft (i. e., 1).

Read more: Russian units that participated in the aggression against Ukraine deployed to Kazakhstan

Remarkably, most peacekeepers were wearing balaclavas over their faces during the grand welcome at Machulishchy airfield near Minsk, and only about a dozen were standing barefaced (link, web archive). 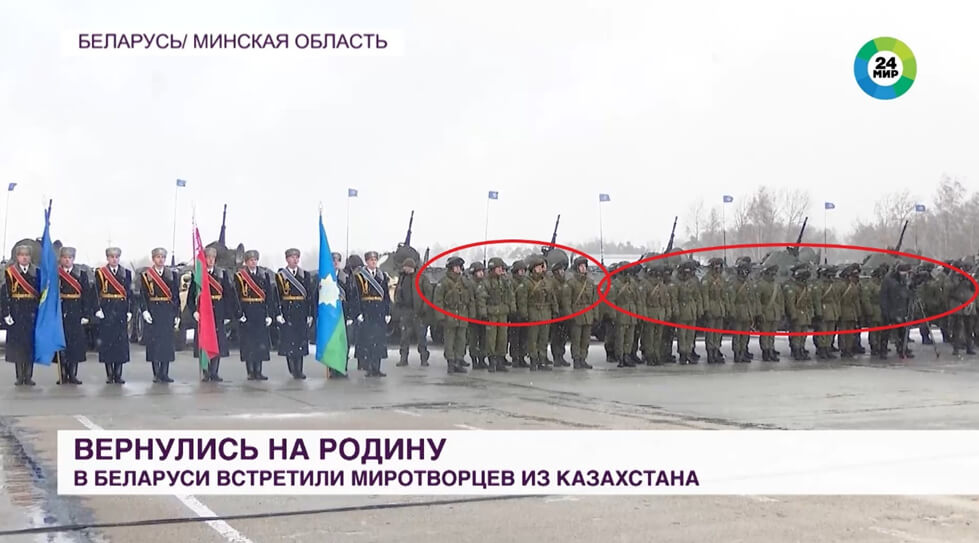 Anyway, all peacekeepers were seen without their balaclavas a day later in Viciebsk, when troops of the 103rd Airborne Brigade stationed in the city were welcomed back (link, web archive). 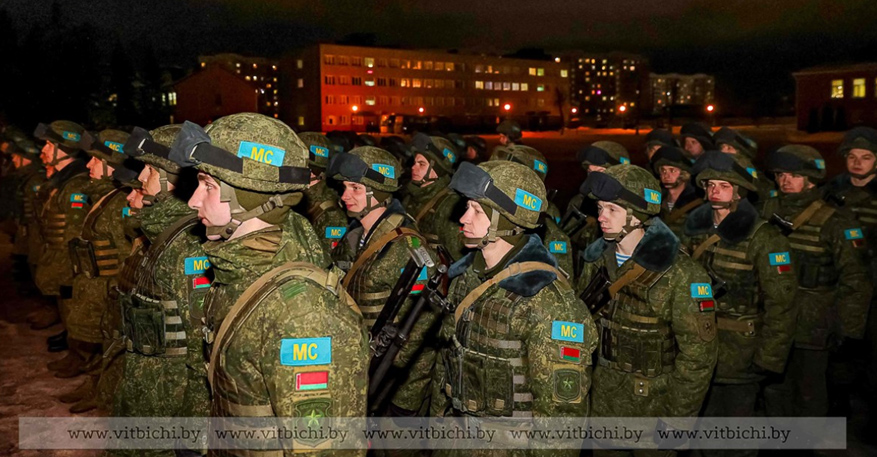 It cannot be ruled out that the soldiers who had hidden their faces stayed in Minsk. They may also be Russian rather than Belarusian soldiers – they may have been that “additional cargo” brought to Belarus on the extra aircraft.

Thus, this “Russian peacekeepers” special operation could be a part of the comprehensive check that includes the inspection of the long-range forces redeployment – according to the Belarusian military (link, web archive), it is to precede the Allied Resolve 2022 exercises that will take place in Belarus in February 2022 as announced on January 17.

The monitoring unit of InformNapalm’s Belarusian team continues to keep an eye on the movement of the potential and actual military equipment and personnel of the occupiers within Belarus and calls on good citizens and patriots to join our monitoring effort and send useful information via social media links to us or other media.

This publication was prepared by the Belarusian editorial team of InformNapalm.

No Responses to ““Belarusian peacekeepers” from Kazakhstan. Who was secretly redeployed in Belarus by Russia?”