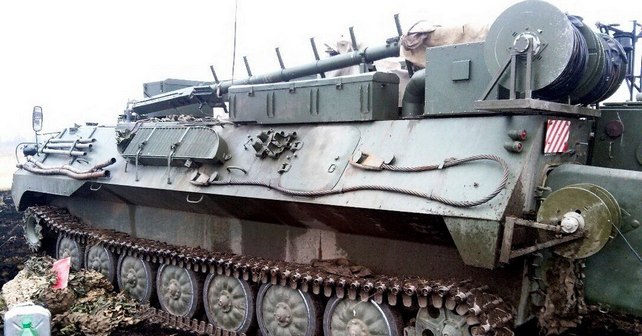 InformNapalm intel volunteers continue to record the facts and gather evidence of war crimes committed by Russia in Ukraine. These is no period of limitation for war crimes, and all collected evidence will be used in a future war crimes tribunal. We know that the only motivation of Russian war criminals is greed. Hiding behind daydream concepts of a mythical ‘Russian world’ they pretend to defend, Russian soldiers and mercenaries occupy the territories of sovereign neighbor states, violate international law, and grossly abuse human rights. This investigation confirms the use of unique equipment that could fall into the hands of illegal militant groups only from Russia and under Russian close supervision.

Photo and video evidence of Russian R-378B jammer of Borisoglebsk-2 EW system operating in Ukraine was found in the social network account of Vadim Igorevich German, citizen of Russia, who in 2014 was fighting in the so-called “First Cossack Regiment of the Don Cossack Host (Vsevelikoye Voysko Donskoye)” – one of the illegal armed groups in Donbas.

Please, read carefully what this Russian citizen wrote on his wall: “I’m a militant, and I’m proud of it!”. In good old times people would be proud of other jobs and professions, but now people in Russia are proud of a new profession – a militant in Georgia, Ukraine, Syria and other countries. Money is the major motivator, and preferably U.S. dollars, not rubles. Slaughtering people in other countries is a well-paid job. 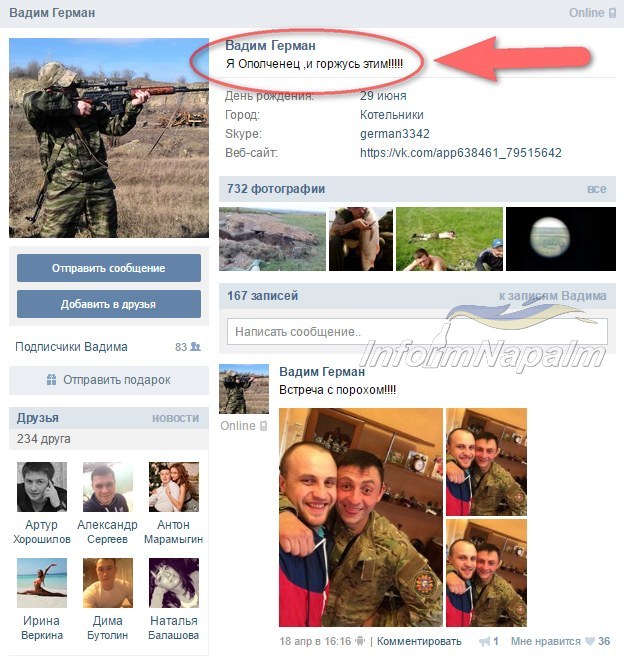 Back in 2015 the following photos (1, 2) were published in a social network, but the location was not identified. It was also difficult to tell whether it was R-330B or R-378B jammer. 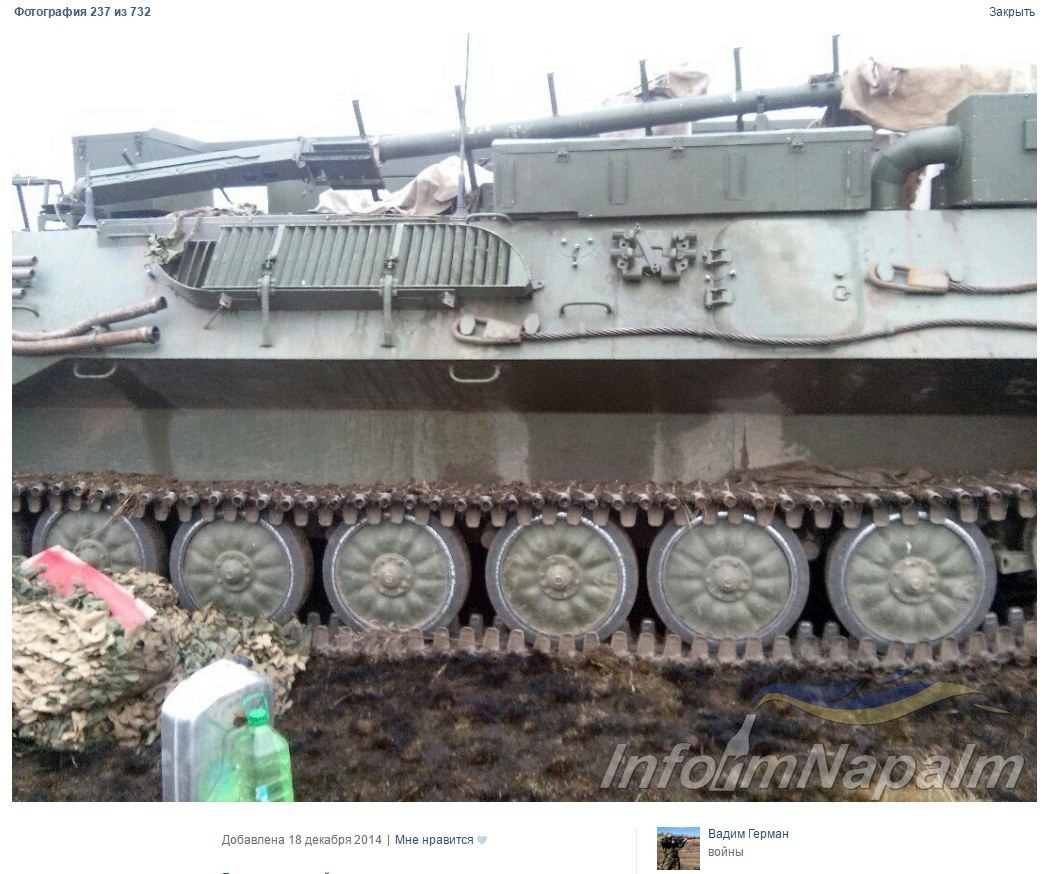 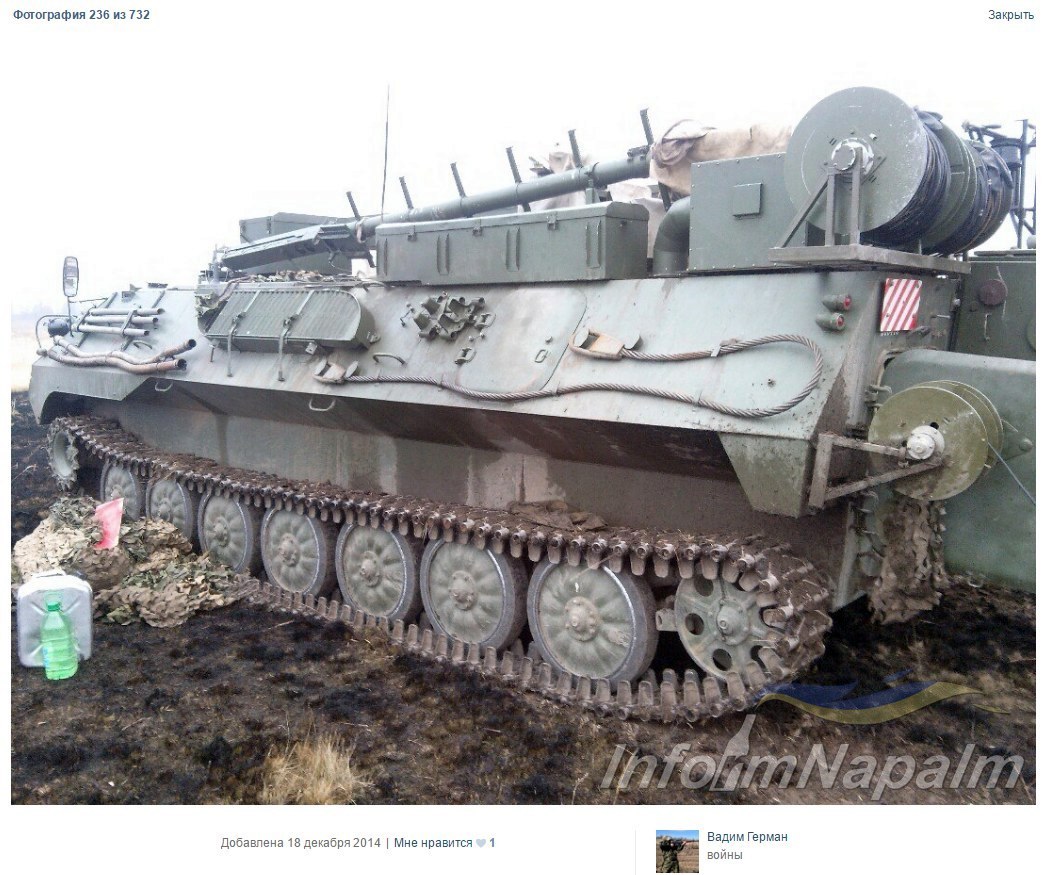 These other photos were published by the Russian militant on December 18, 2014. Please, pay attention to the scorched earth. If you look closely at the front part of the jammer, you will notice a patch of land with yellow, dry, but not completely burnt grass. Remember this, we will come back to this point later.

You can take a look at the image from the open database that was used for precise identification of this military equipment:

Video album of the Russian soldier of fortune showcases this video published on December 2, 2014.

Video shows how Russian militants are cooking “a festive breakfast” of Ukrainian fast food noodles for “The Day of Military Reconnaissance”, and Vadim German says “Today, on November 5”.
Background information: On November, 5 Russia celebrates the Day of Army Reconnaissance – a professional holiday the Russian military, whose service in one way or another is related to scouting and reconnaissance.

Then Russian militants move the camera to show the jammer and say: “Here’s what we protect, this f**king shit. It’s called radar system (this is about jamming station R-378B), right? I zoom in. Take a look! We take the bearing of the Ukies, point at a target and f**king fire. And this is our position. This is our invisible man watching. And he is looking in the direction of Ukropia (derogatory slang word for ‘Ukraine’). The Ukies are there, now I will zoom in a little bit for you. That’s where they are. There’s a road behind that hill, shrubs are out there, that’s where their eyes are (i.e. surveillance post of the Ukrainian Army), and war equipment moves somewhere on the horizon.” Vadim comments everything. “The the power plant. A strategic facility. It hasn’t been hit yet”. And by the end of the video he says: “And that’s where our minivan (an old Soviet UAZ-452) is, that’s in case we will have to get the f**k out of here when they shell us. If we can make it of course.”

The most important shots from the video

Jamming station R-378B of Borisoglebsk-2 EW system
You can see the scorched earth and the patch with yellow untouched grass nearby. Everything is just like in the photo above. 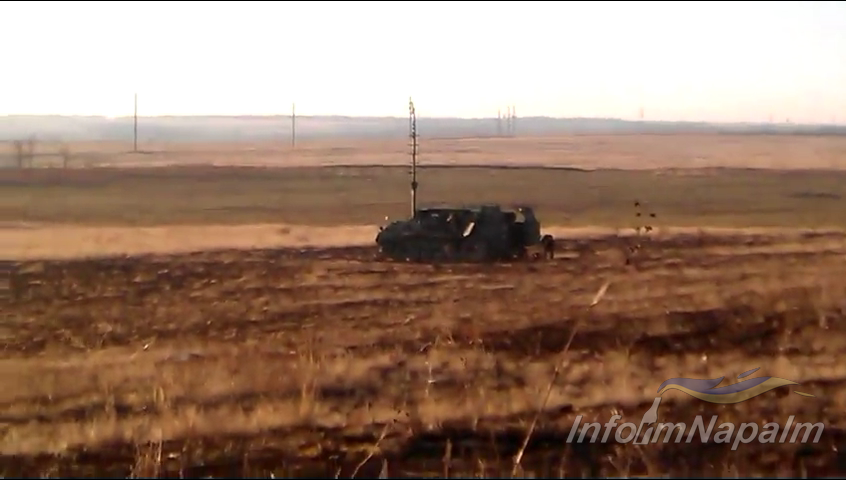 The road behind the hill and shrubs sticking out, where Ukrainian “eyes’” are. 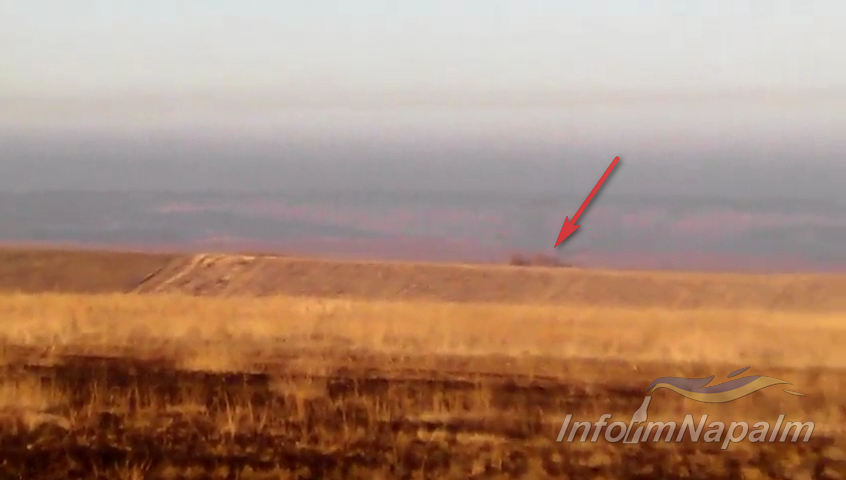 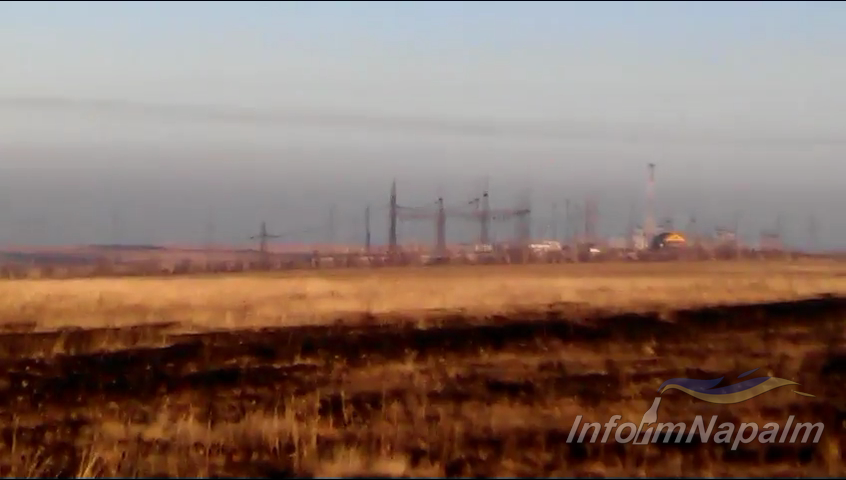 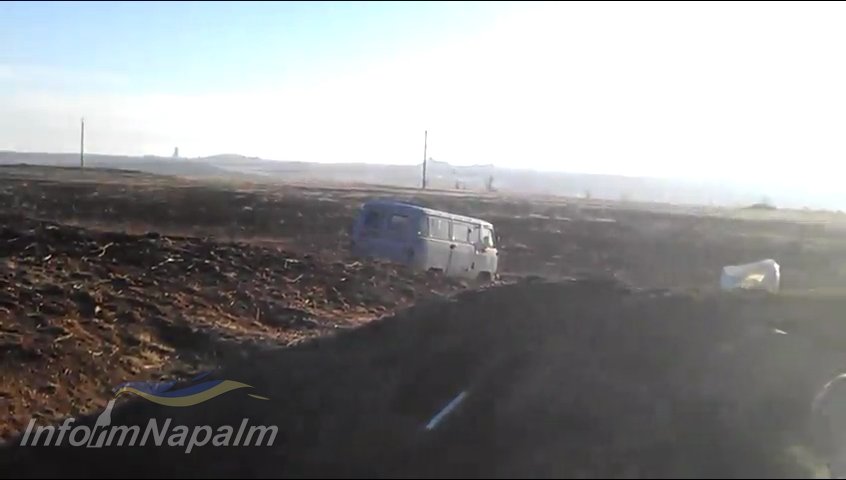 After studying the social network account of Vadim German we figured out that his photos were often taken near Stakhanov (now Kadiivka). It is well-known that the city is controlled by militants from the so-called ‘First Cossack Regiment of the Don Cossack Host”. The video was shot on the outskirts of Stakhanov, too.

Power plants and substations on the map of this area: 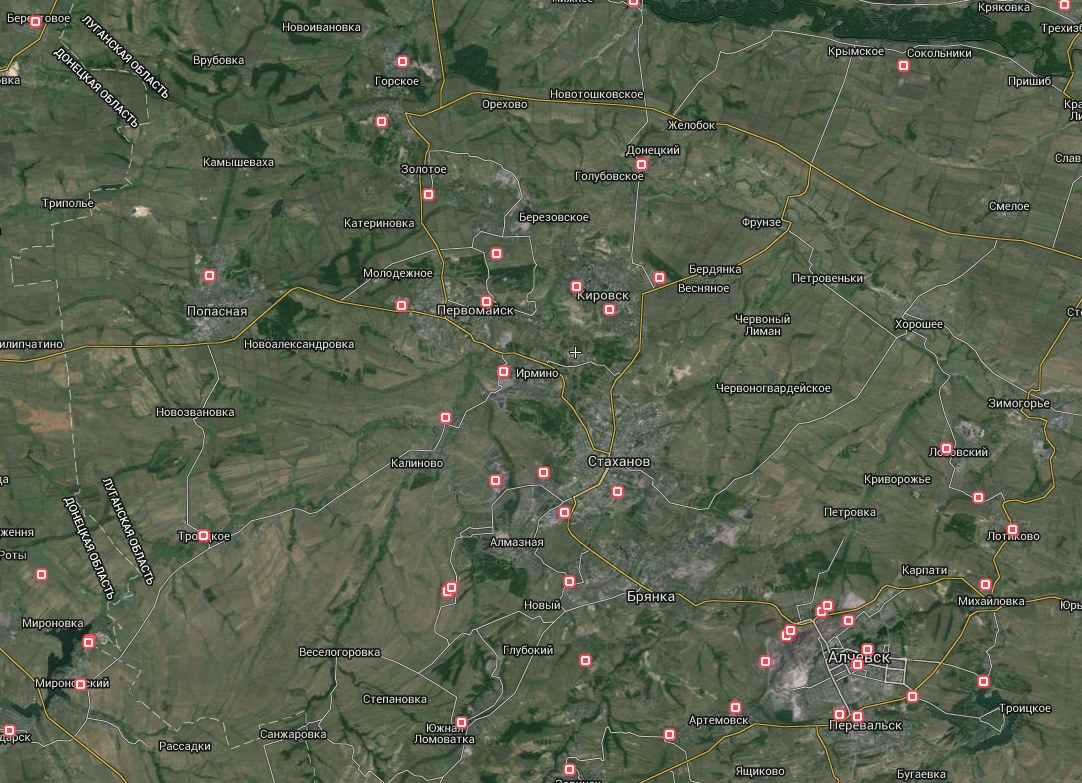 To narrow the search we picked the date – November 5, 2014 – and looked up the approximate line of contact on liveUAmap that day. The territories occupied by Russia are colored with red.
Almost immediately we found the right powerplant. It turned out to be “Novodonbaska” substation in Stakhanov (Kadiivka), Luhansk Oblast, 500 MVA capacity. 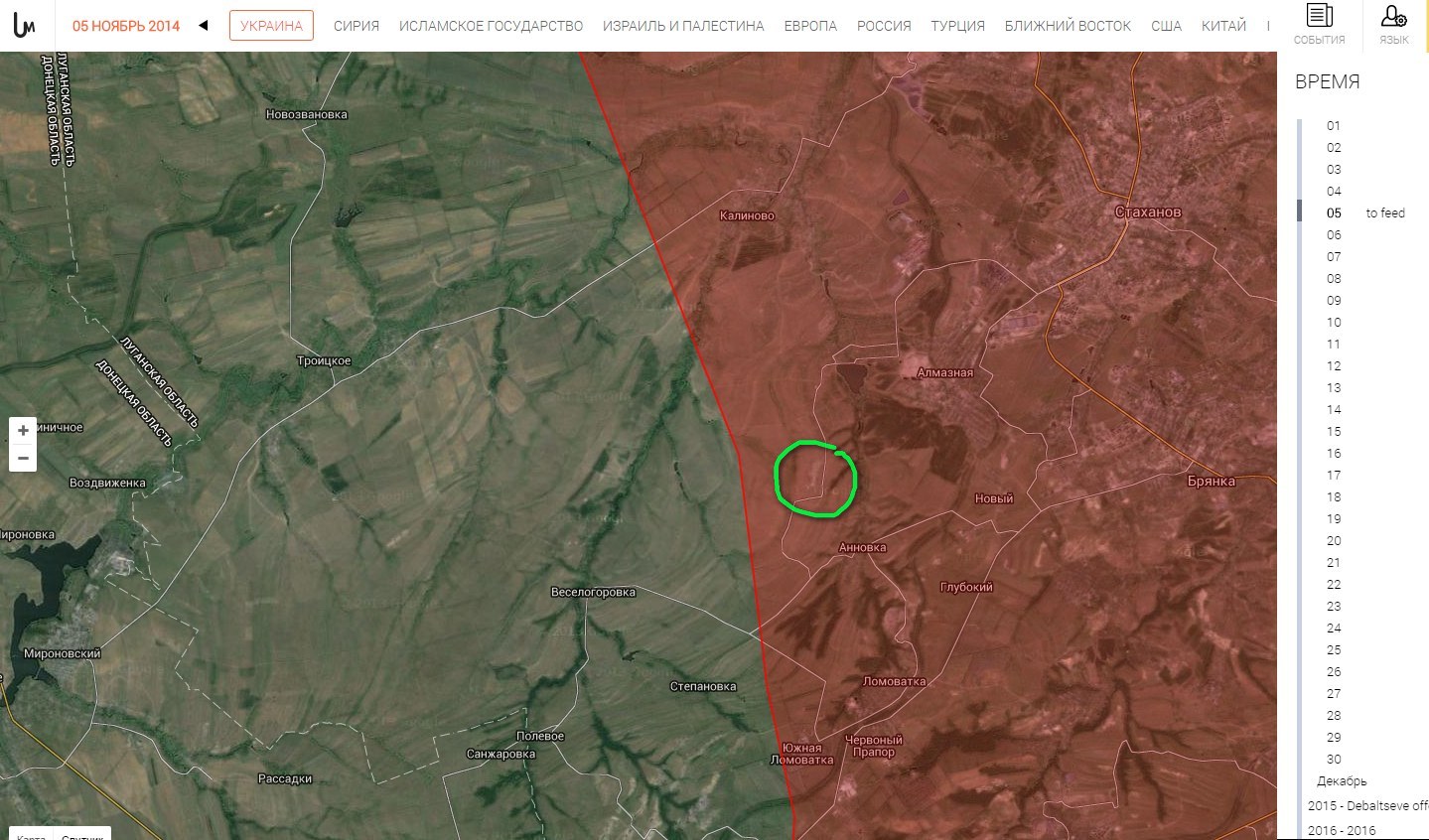 For more accurate geolocation, we placed a video frame with the substation on top of the Google Maps snapshot with the closest possible date – October 30, 2014. 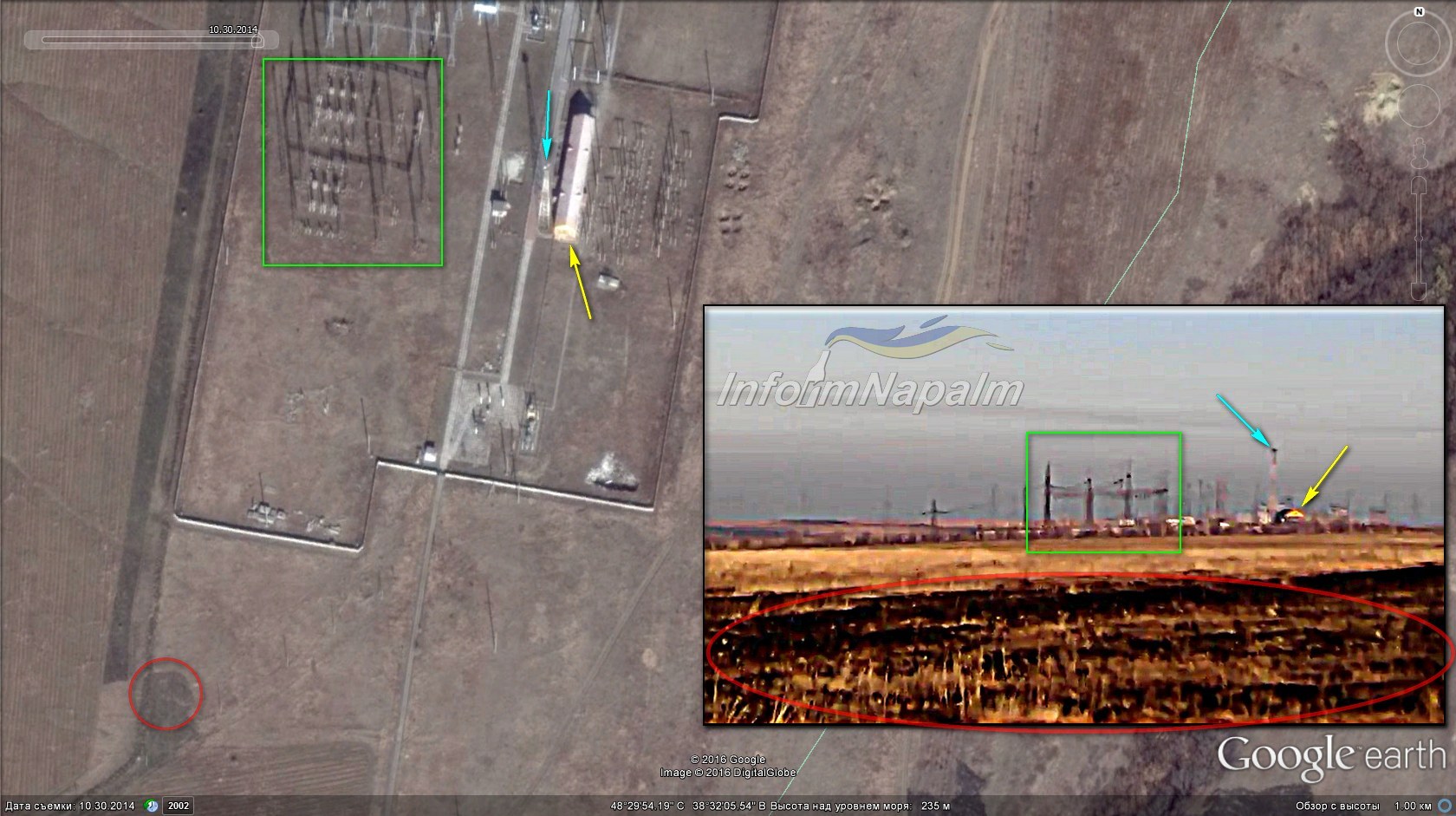 Let’s pull out all photos of Borisoglebsk-2 EW system taken in 2014-2015. Please, single out the photo taken on February, 3, 2015 when the vehicle was spotted in Bryanka, Luhansk Oblast. According to one of the eyewitnesses the vehicle was moving from Alchevsk to Bryanka. Stakhanov (now Kadiivka) and Bryanka are almost equidistant from Novodonbaska substation.

Now we invite all of you to compare tho pieces of the military equipment by cables, dents and other unique marks based on these photos. 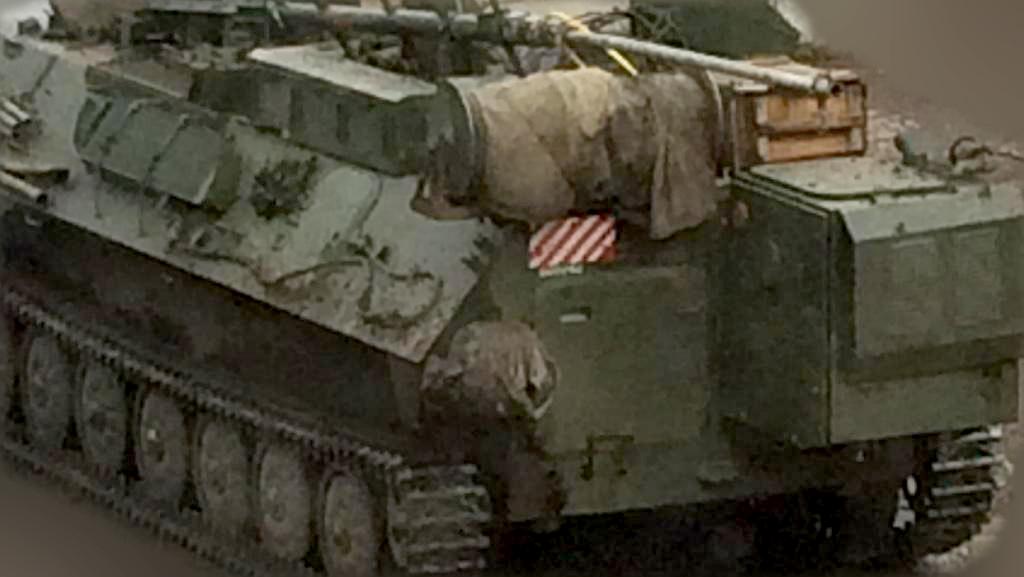