Russian territory was shelled from the Russia-occupied territory. OSINT Evidence 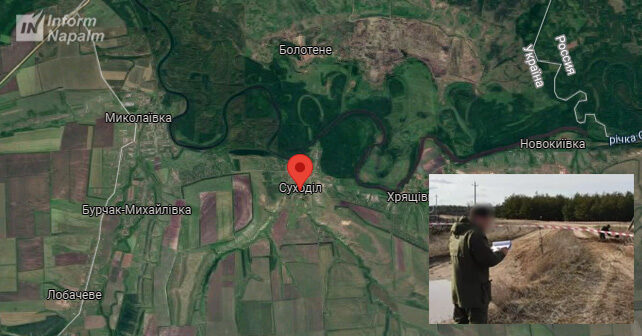 Russia keeps actively fabricating and promoting fake news reports, organizing false-flag provocations to justify the Kremlin’s decision to openly invade Ukraine with military force, mainly for the domestic audience and, secondly, for the international community. International volunteer community InformNapalm, undertook an open-source (OSINT) investigation of the incident that had taken place on February 19, 2022. Russia’s Investigative Committee initiated criminal proceedings as a result of this incident. InformNapalm volunteers determined the exact coordinates of the multiple rocket launcher (MRL) used to shell a border area in Rostov Oblast of Russia. Rockets were found to have been launched at 4.00 AM on February 19, from the village of Sukhodil in Luhansk Oblast, currently controlled by the Russian occupation forces. 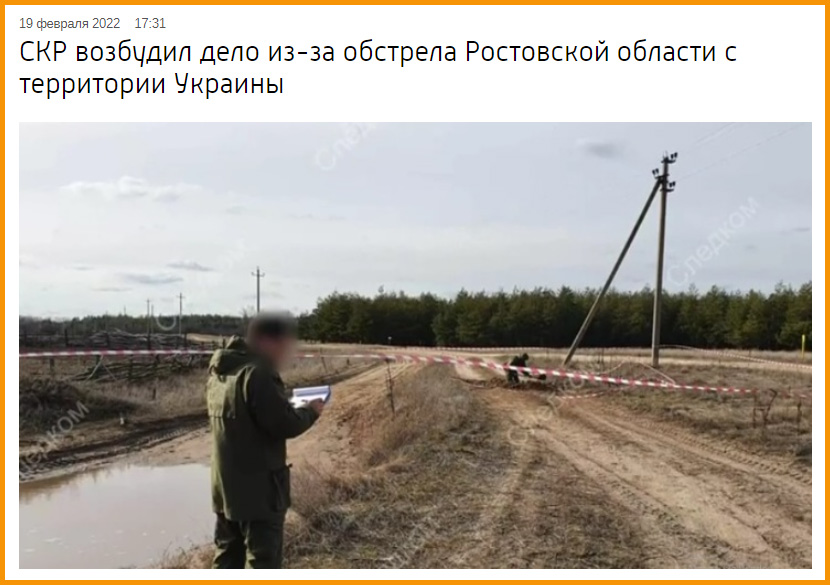 The next day, Russian propagandists from the NewsFront channel published a video purported to confirm the shelling from Ukraine to reinforce the message. The information about the shelling was supported with exclusive video footage shot from a surveillance camera that had recorded the MLR volleys. Russian propagandists claimed in their publication that the shots had been fired “from the northern bank of the Siverskyi Donets near the village of Bolotene.” 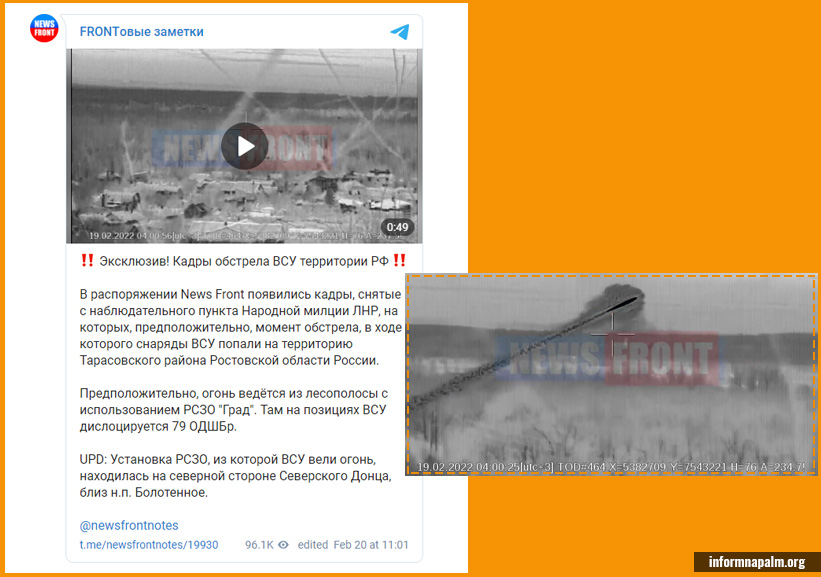 InformNapalm volunteers noticed that the video footage published by the Russian propagandists indicated the coordinates of the surveillance camera in the SK-42 reference system (the so-called rectangular coordinates) used for military purposes only. 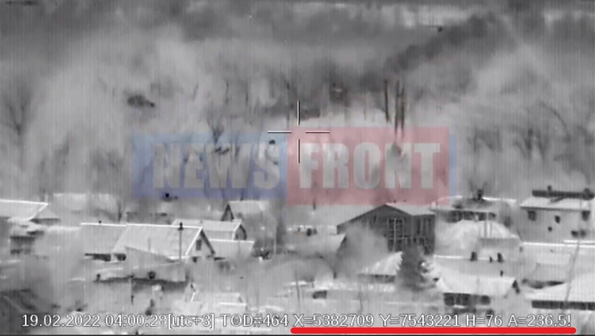 These figures may have seemed inconsequential for people better versed in propaganda rather than in military affairs. However, military experts can easily convert these coordinates into the WGS-84 reference system commonly used by civilians. In this reference system, the coordinates will look like 48°34’32.5″N 39°35’03.1″E

These are the coordinates of the village of Sukhodil (before the decommunization in Ukraine, this village was named Pionerskoye, and this name is still retained on the Russian maps). The geographical location of the surveillance camera is indicated with a red triangle on the map: 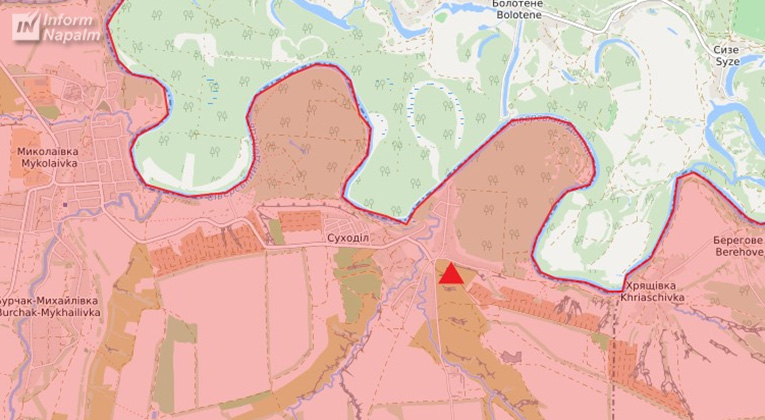 It can be seen from Liveuamap that this area has not been controlled by the Ukrainian military since 2014 and is under the control of the Russian occupation forces. The area control boundary runs along the Siverskyi Donets river.

Brief analysis of the video footage

In the event the video footage is deleted by its publisher, we saved it on our channel.

The camera is installed on a dominating hill in line with the military logic. The camera’s absolute elevation is 76 m (it is indicated on the screenshot) and matches the hill height.

On the 11th second of the footage, the camera records the location of the second rocket launch. One can see not only the smoke trace from the rocket booster but also the reflected cloud of dust and combustion products behind the launcher. Physically, it is impossible to monitor settlements in the area controlled by the Ukrainian forces as closely as we can see on the video footage because it is located on the other bank of the Siverskyi Donets river and has no matching buildings. 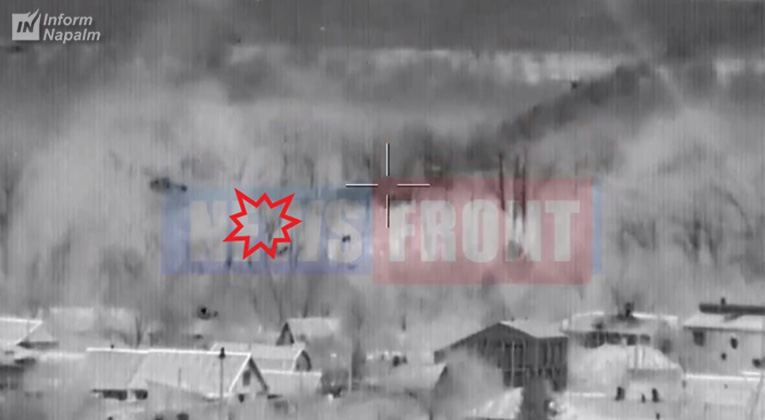 The launch area is clearly seen to be located between buildings and greenery. A bird’s eye view of the area is enough. These are the coordinates of the camera’s location: 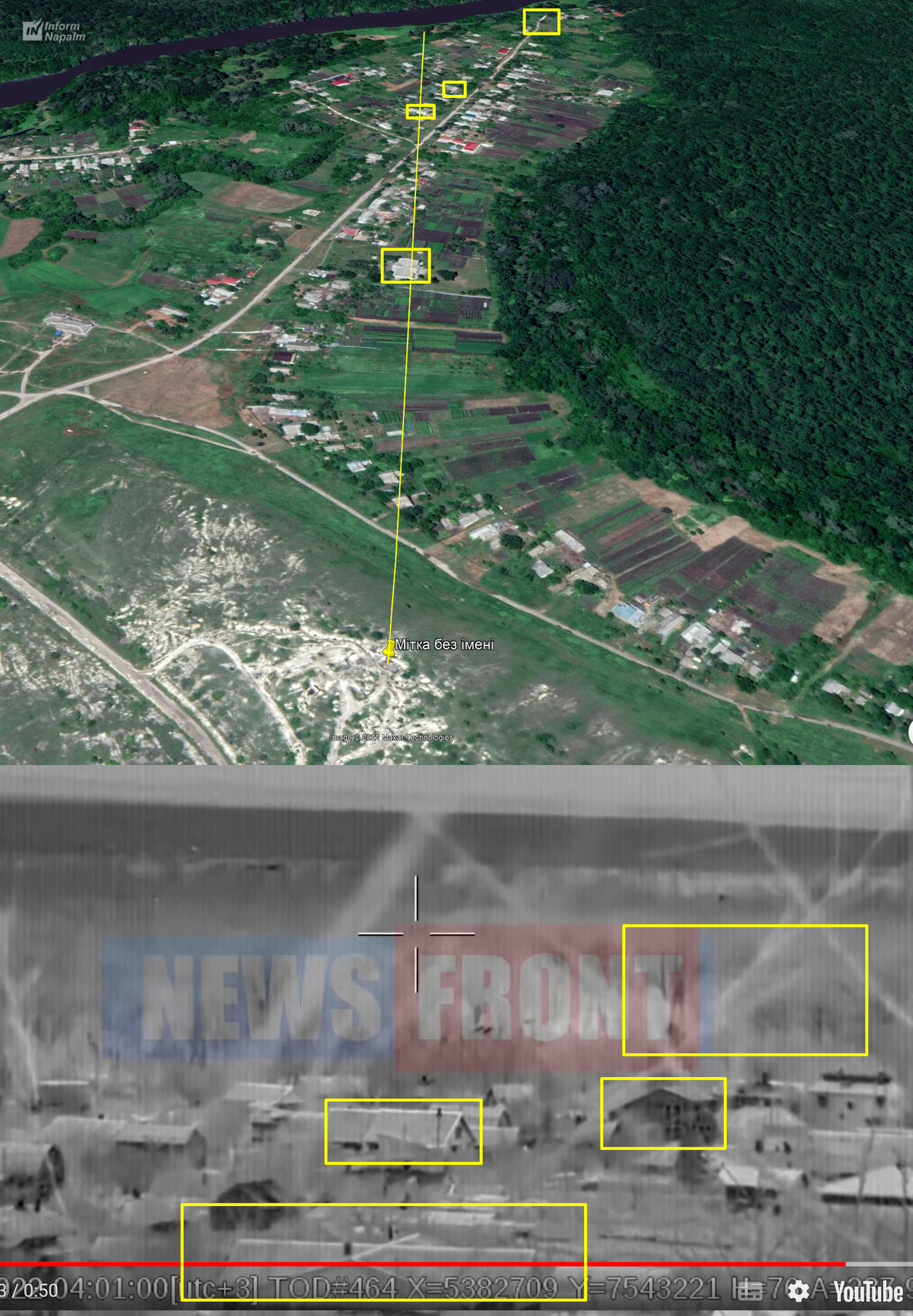 It means that the coordinates of the MRL used to fire rockets toward the Russian Federation are within the temporarily occupied area of Luhansk Oblast, on the southern bank of the Siverskyi Donets river. It can also be seen from the video footage that the rocket traces run between the camera and the power transmission line, with water glinting in the background; accordingly, the shots were fired from the same bank of the river.

InformNapalm’s volunteers effectively solved the case for Russia’s Investigative Committee. If Russia were genuinely interested in prosecuting the perpetrators, they would find them easily by tracking the route using the provided coordinates. However, Moscow does not want the truth; it wants fake news on the back of false-flag operations to manufacture grounds for waging not a hybrid war, but a larger-scale aggression against Ukraine.

Just a day earlier, on February 18, Russia’s national-level propaganda outlets, including the 60 Minutes show, were actively promoting fake video footage allegedly depicting a combat engagement with a “Ukrainian sabotage party” purportedly trying to “gain entry to blow up chemical industry facilities in the Donbas.” However, InformNapalm volunteers and many other OSINT investigators pointed toward numerous facts refuting the line put forward by the Russian spin doctors, from the video creation date to the expert assessment of both the behavior and ammunition, being unusual for special operations forces. Apparently, this video with tracer ammunition being fired was staged for visual appeal aiming at the mass audience inclined to believe the Kremlin’s propaganda rather than look for evidence on their own.

On February 21, Russia’s Federal Security Service (FSB RF) claimed yet another incident, with an allegedly “Ukrainian projectile hitting a building of the FSB’s border service in Rostov Oblast.” The State Border Service of Ukraine has officially stated that this is one more deliberate provocation by the Russian Federation. Obviously, it points toward the continued accumulation of fake “newsworthy events” resulting from Russia’s false-flag special operations intended to persuade primarily Russian citizens of the need to address the “Ukrainian question” as soon as possible.

No Responses to “Russian territory was shelled from the Russia-occupied territory. OSINT Evidence”