Russian Weapons in Donbas: Analysis of the “MGB DPR” and OSCE Documents 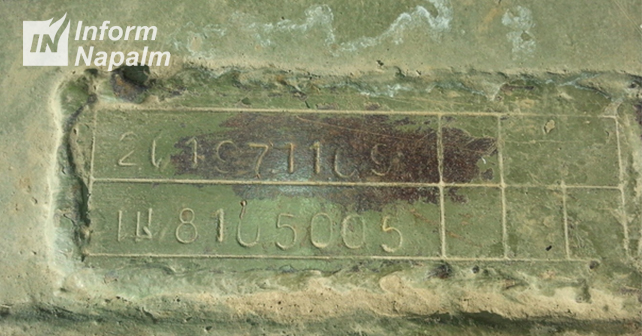 Volunteers of the international community InformNapalm have identified Russian military equipment and armament with a caliber of over 100 mm at the disposal of DPR militants. The identification was performed using photographs obtained from mailboxes of the “MGB DPR” and documents of the so-called 1st Separate Motorized Rifle Brigade of the DPR which featured photos of serial numbers of specified equipment and weapons. The 1st Motorized Rifle Brigade of the DPR, military unit #08801, is based in the village of Komsomolsk, Donetsk Oblast, in the territory of the former PMK-106  and the merchant warehouses (ORS) .

The withdrawn equipment is in service at the 1st Separate Motorized Rifle Brigade.  Major P. Belopashentsev, chief of the brigade artillery, is responsible for the equipment and artillery armament. The exact location of the storage base was established by the geolocation specialist  surpher : The base is  in the vicinity of the village of Ulyanivs’ke, Donetsk Oblast.

Let us remind you that in November of 2015 the InformNapalm volunteers also spotted 2S1 Gvozdika self-propelled howitzers of the same brigade in the village of Petrivske, hidden from representatives of the OSCE monitoring mission.

Analysis of the photographs from the “MGB DNR” mailbox revealed the following:

Four BM-21 Grad MLRS on  Ural-375D truck chassis combat vehicles, with new tires, paint in excellent condition, equipped with frame and camouflage net, there are covers for the radiator grille: 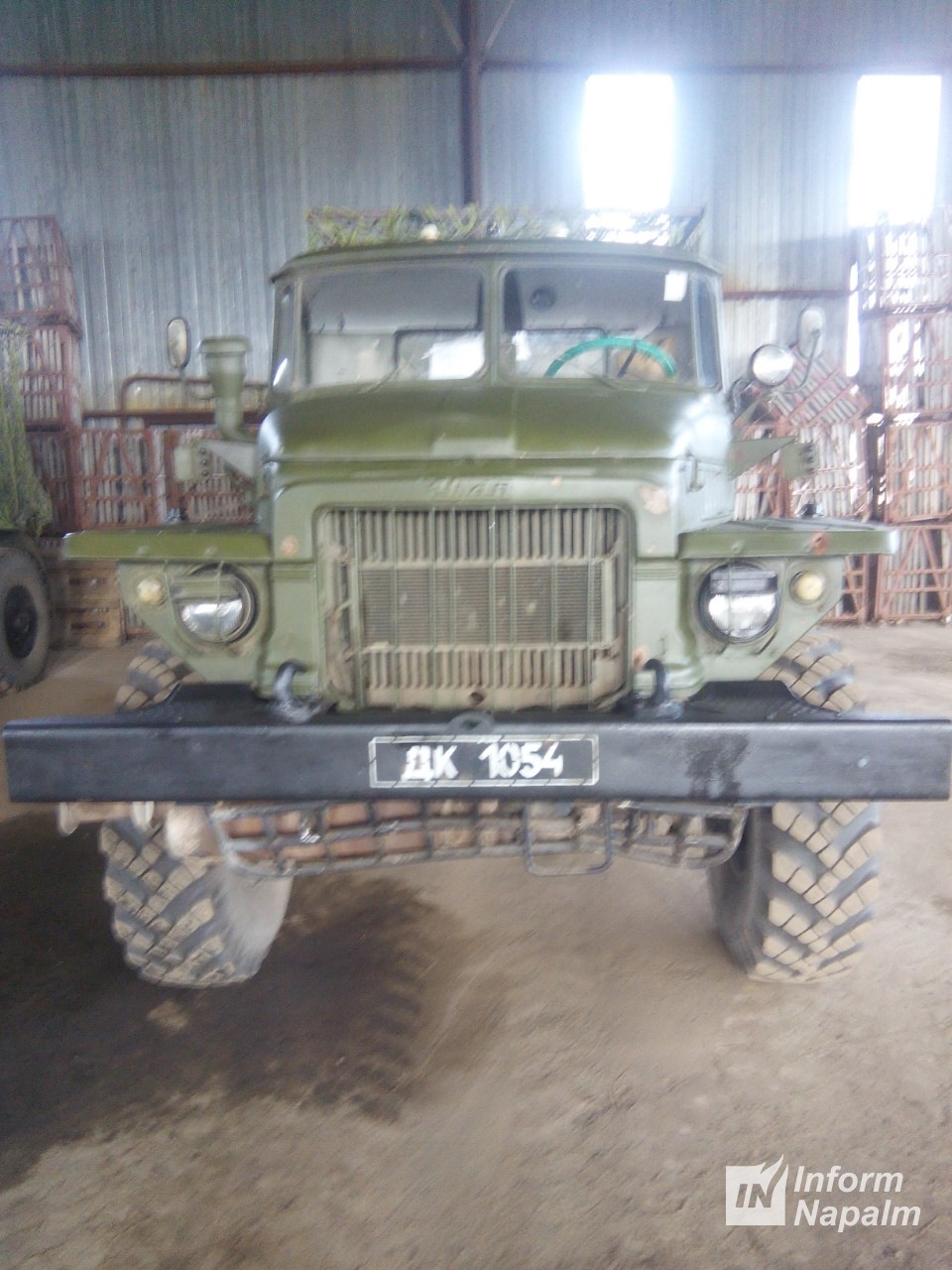 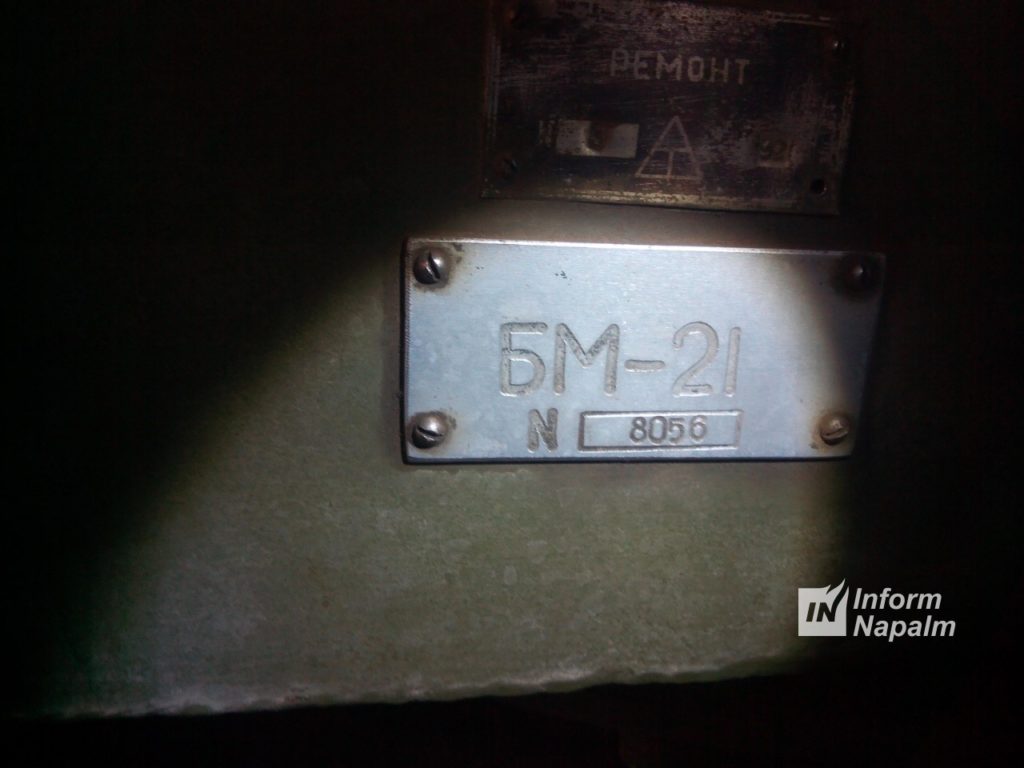 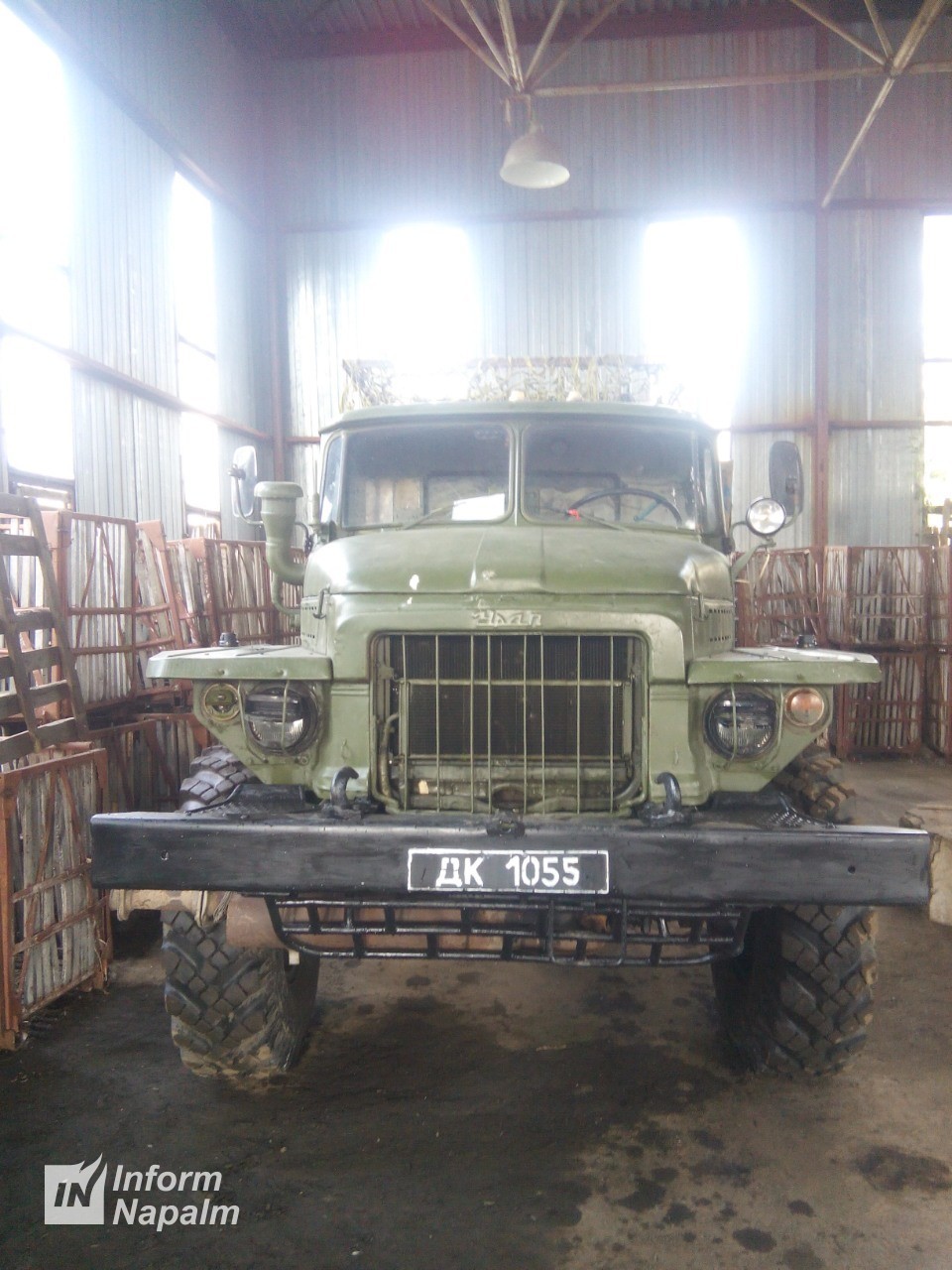 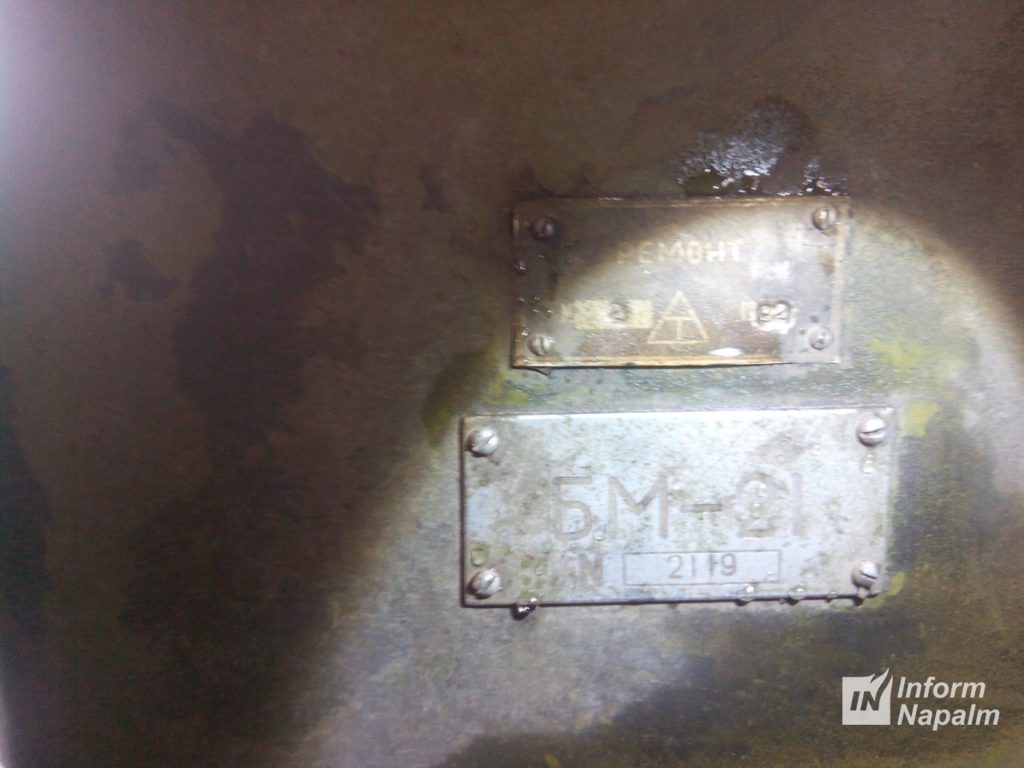 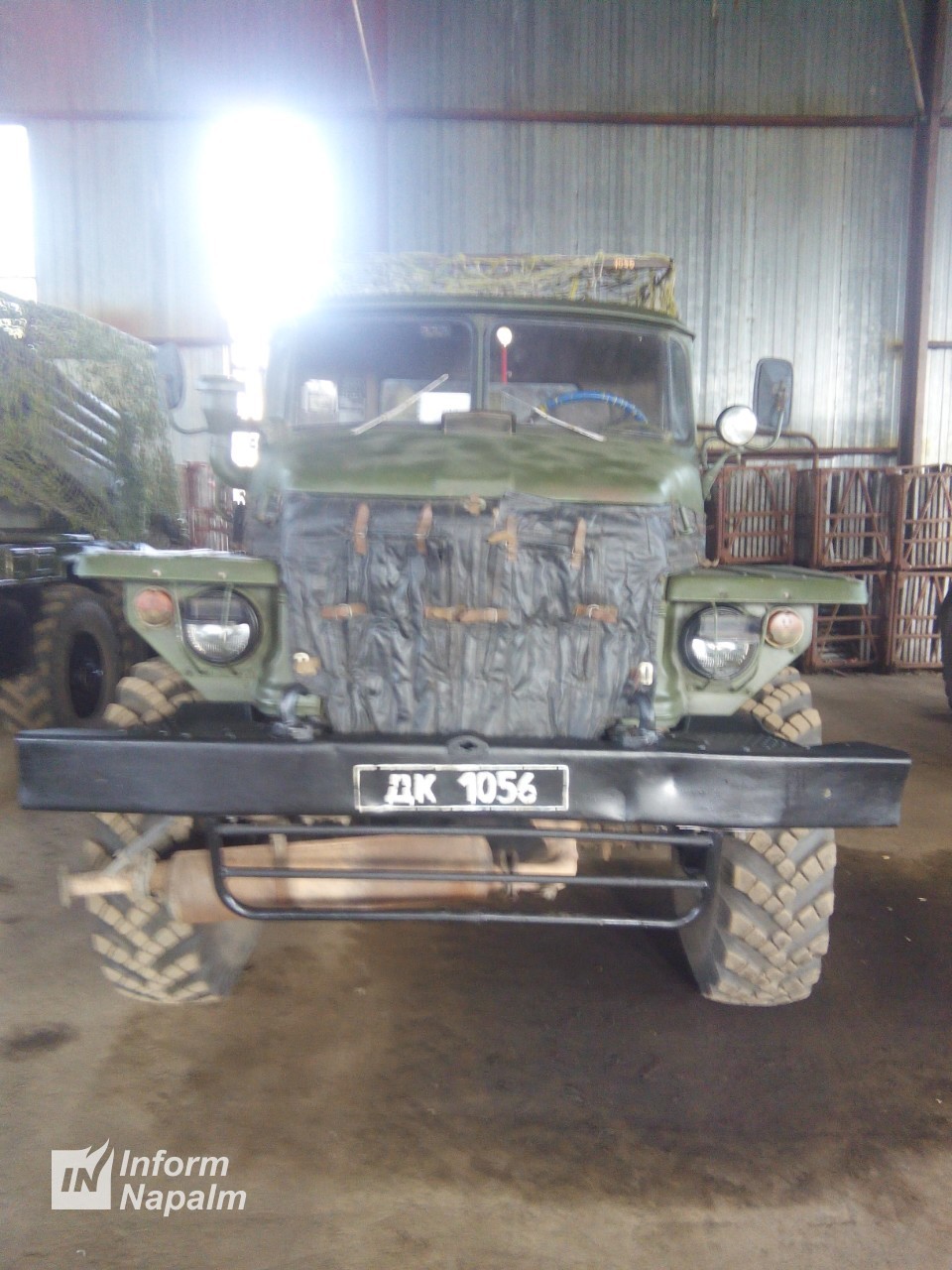 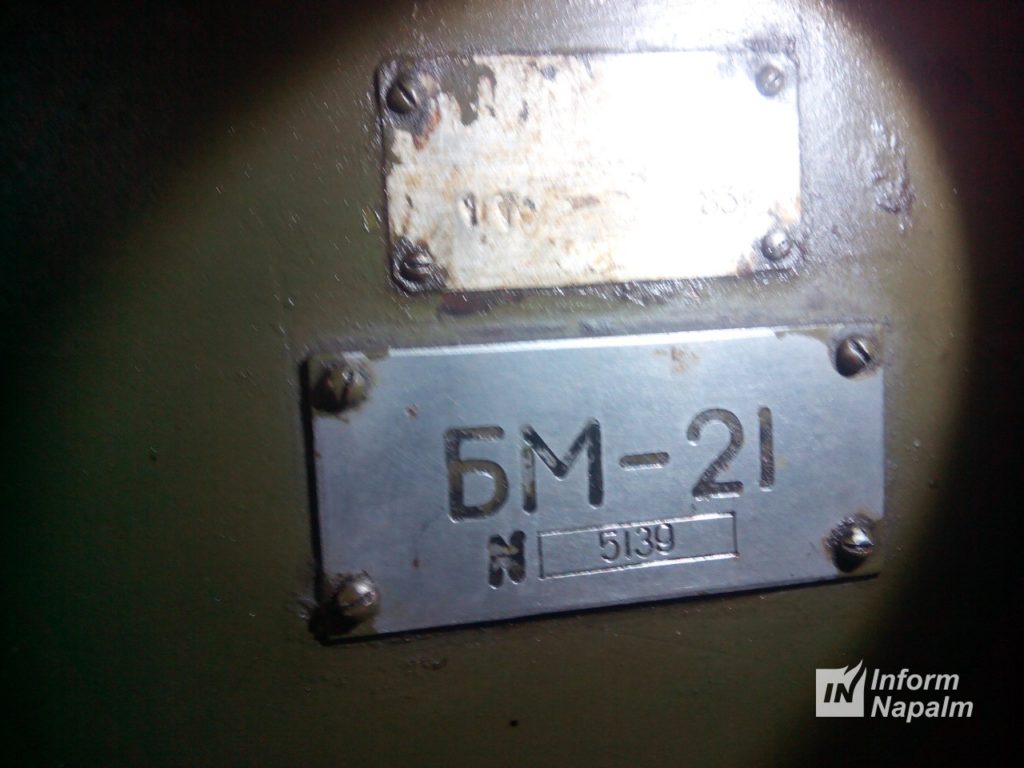 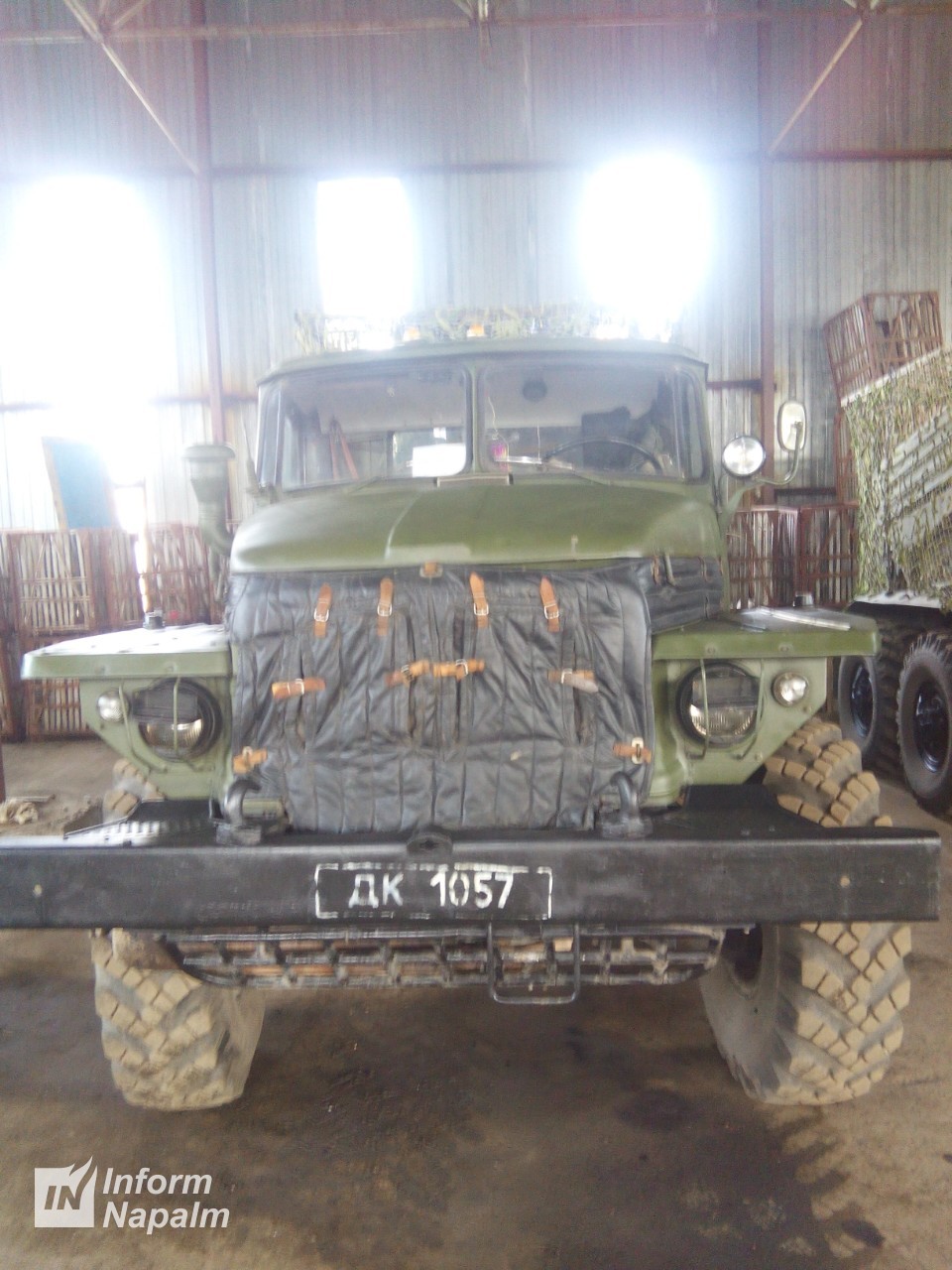 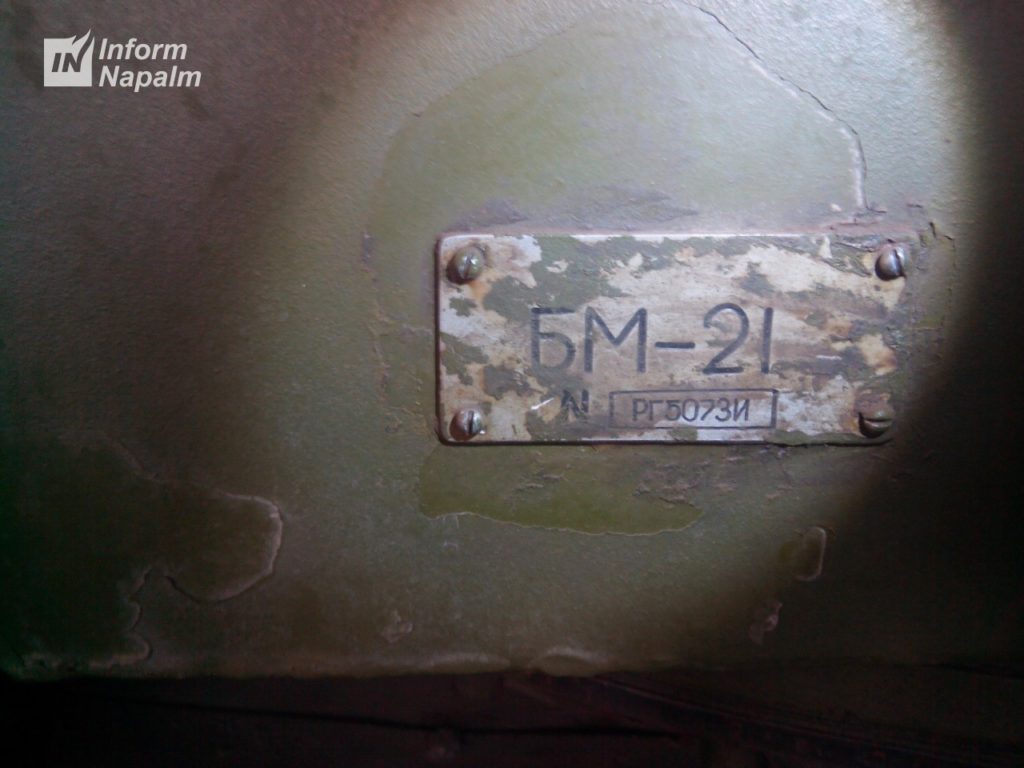 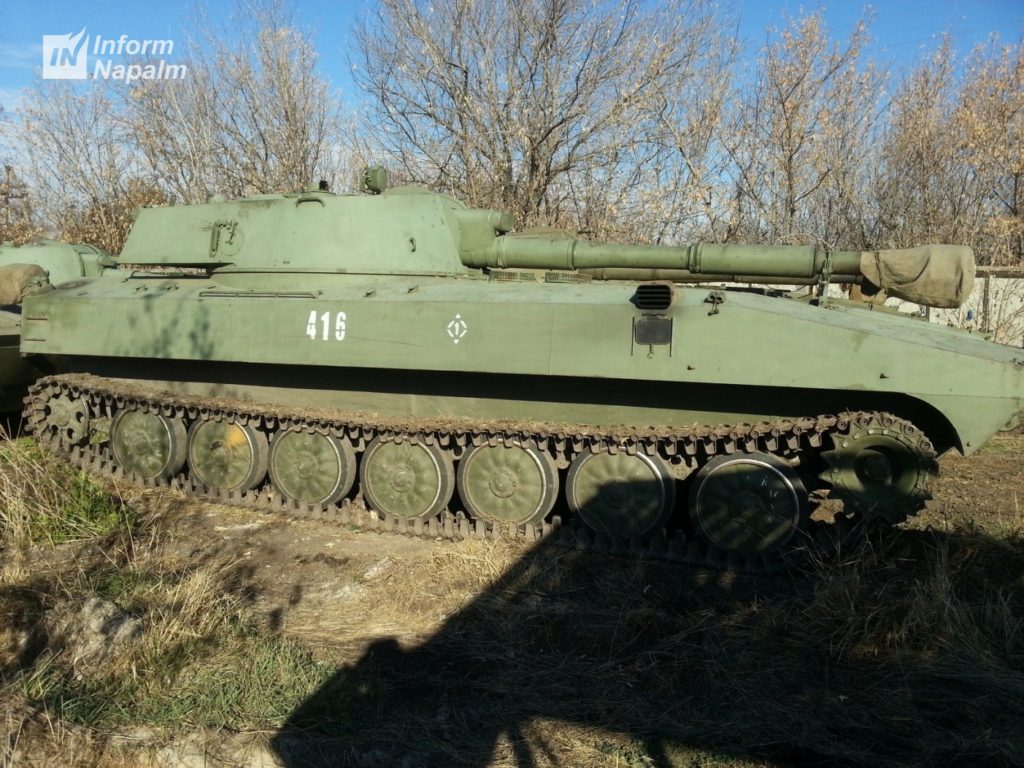 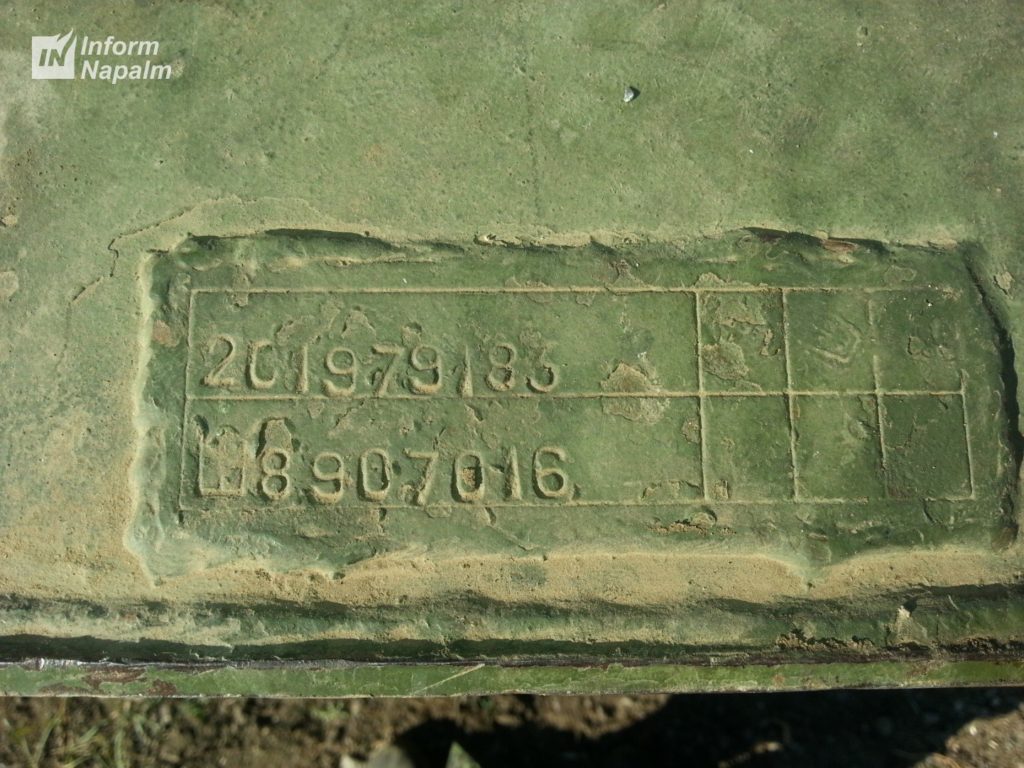 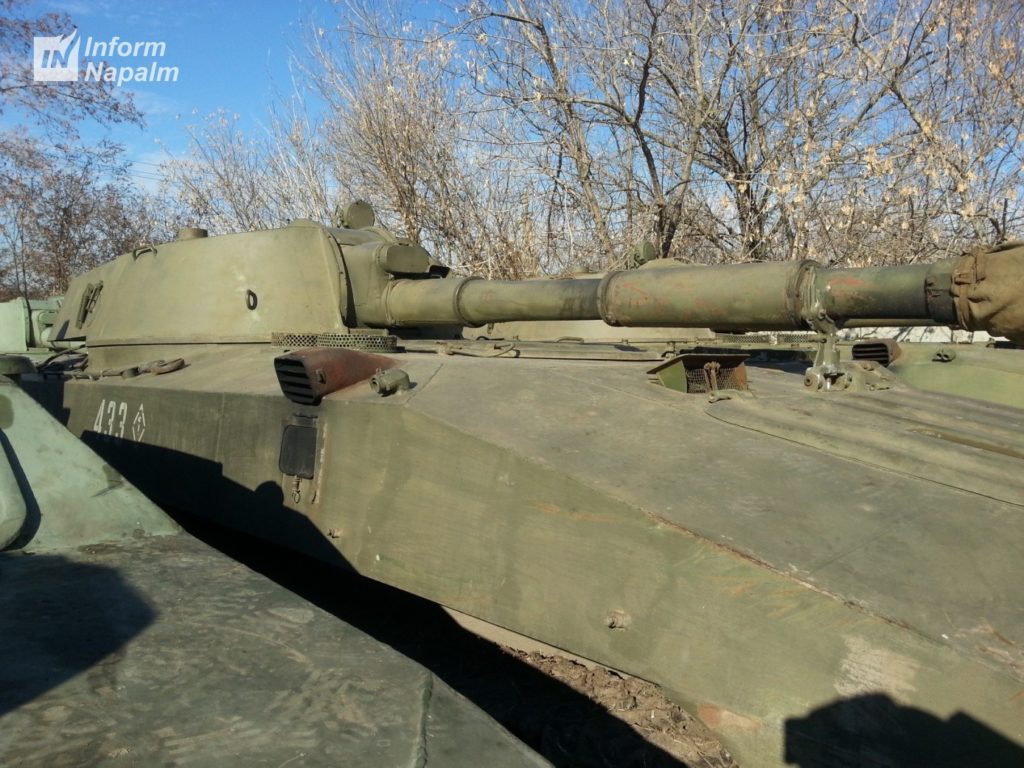 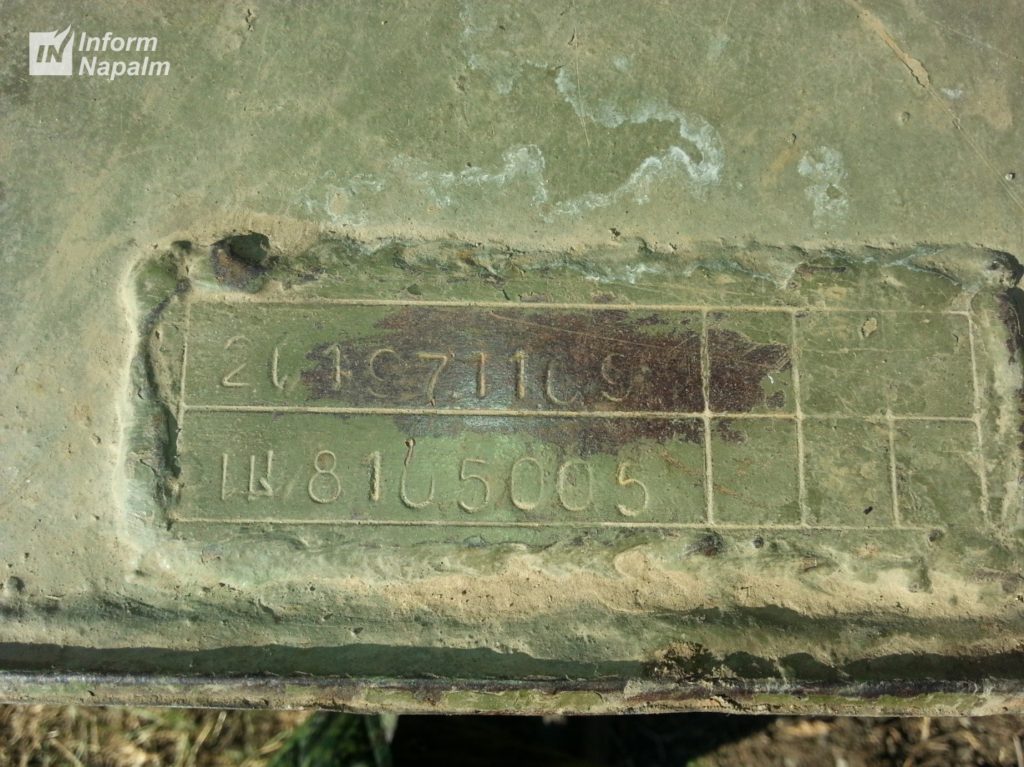 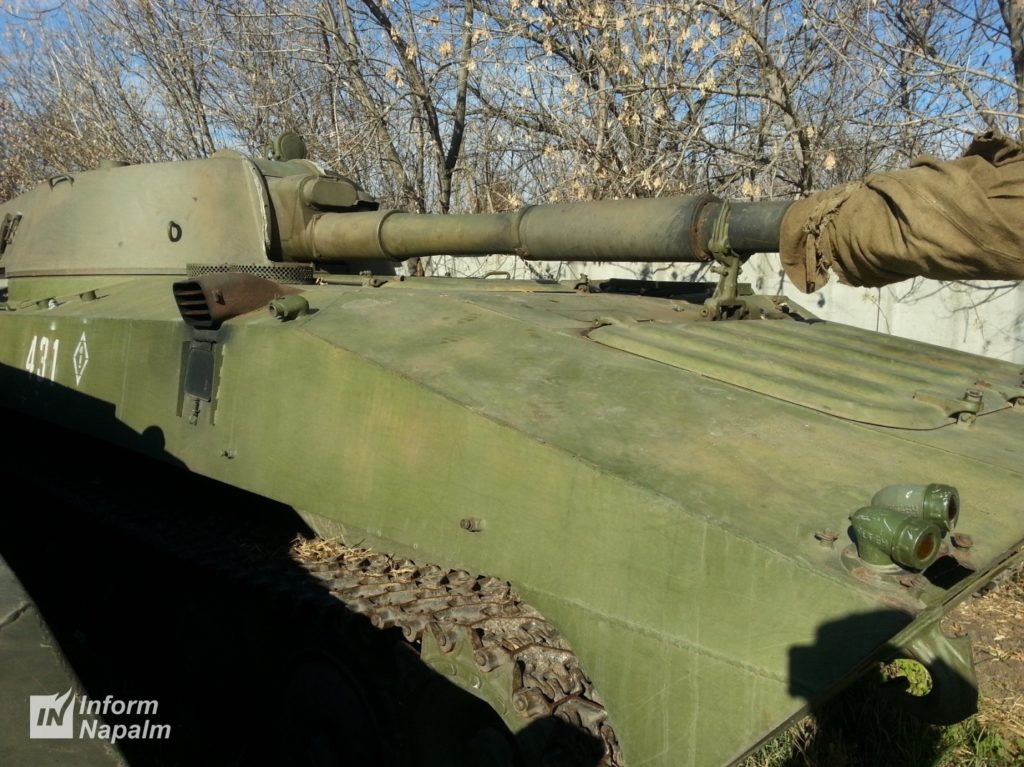 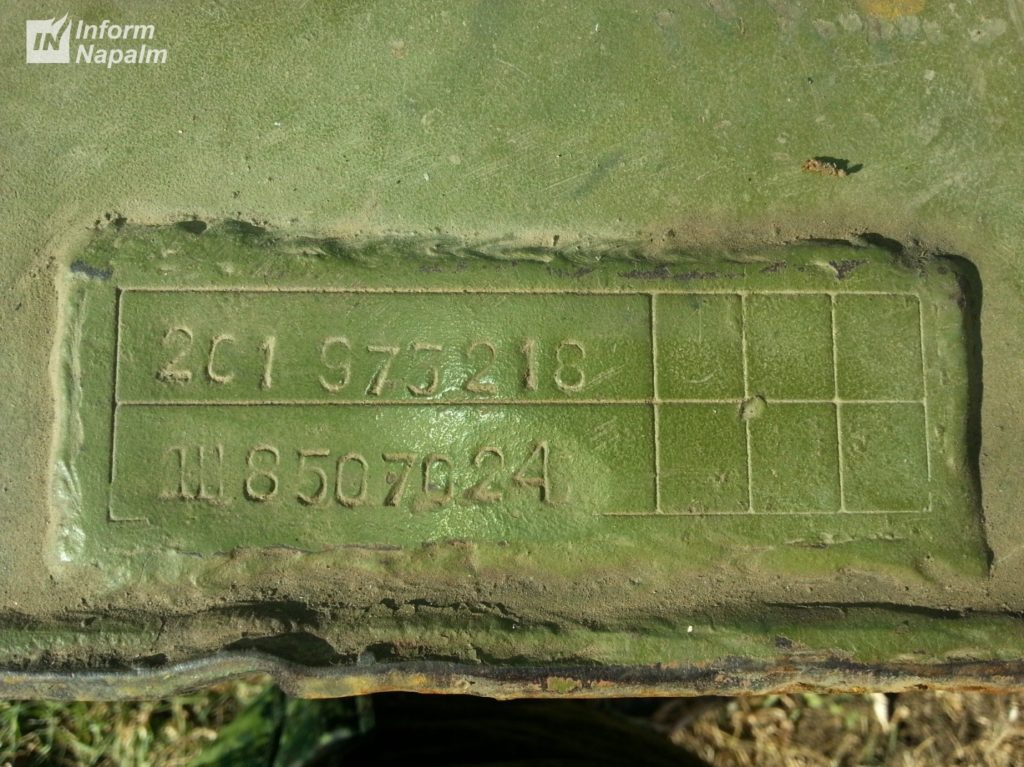 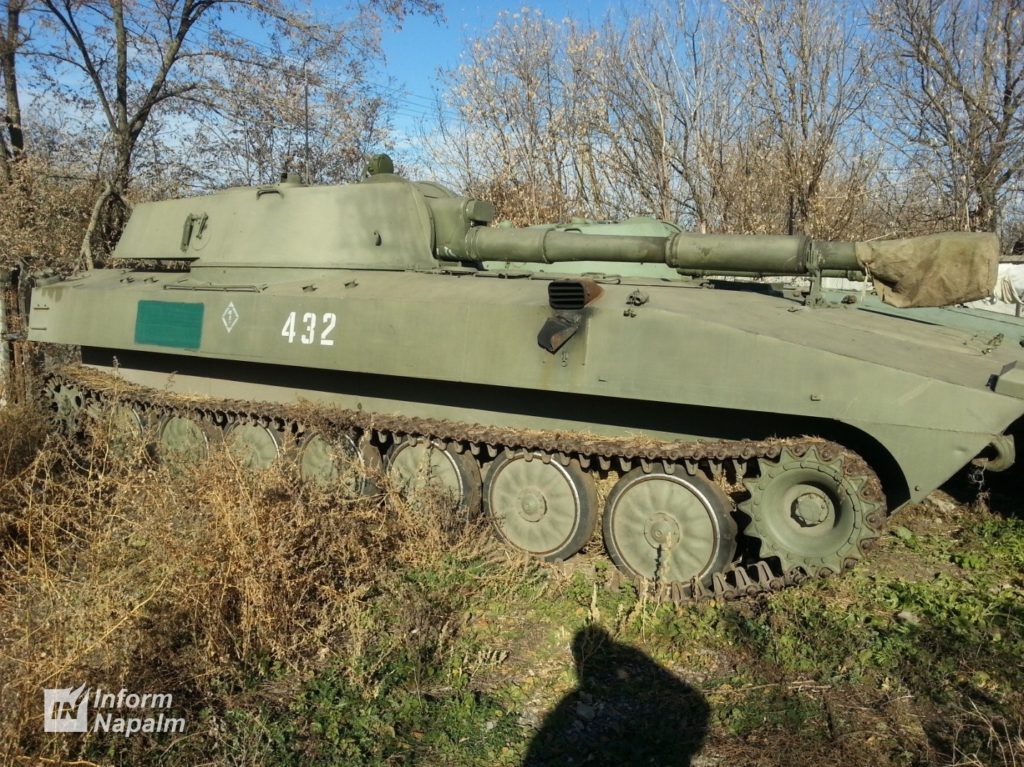 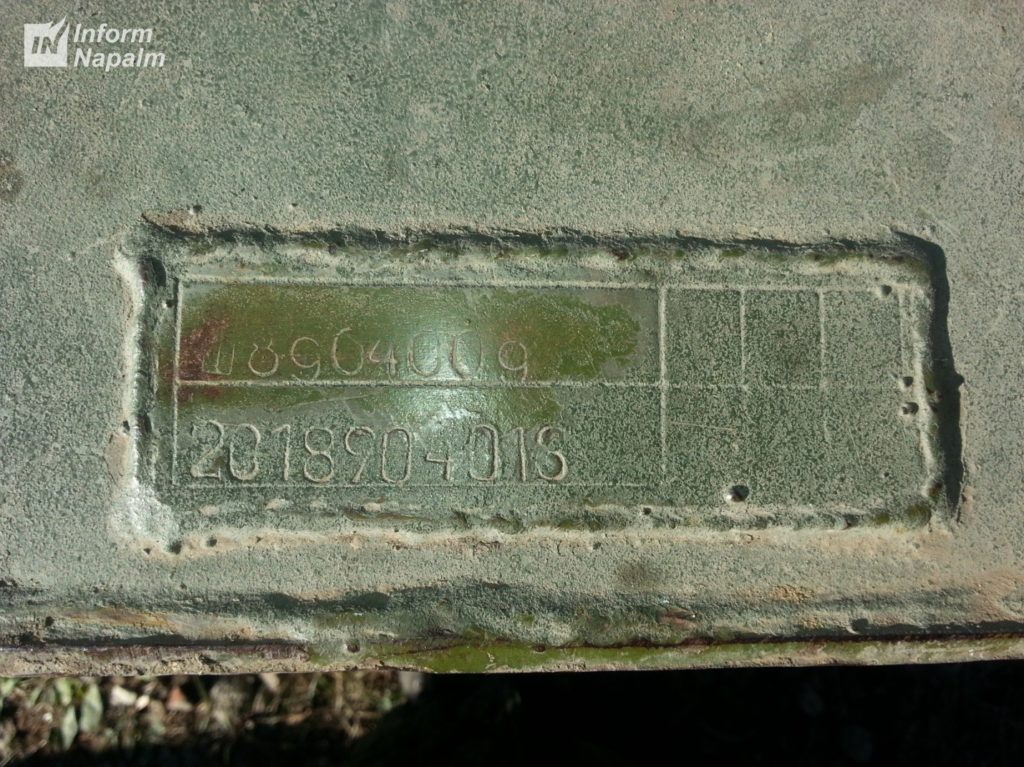 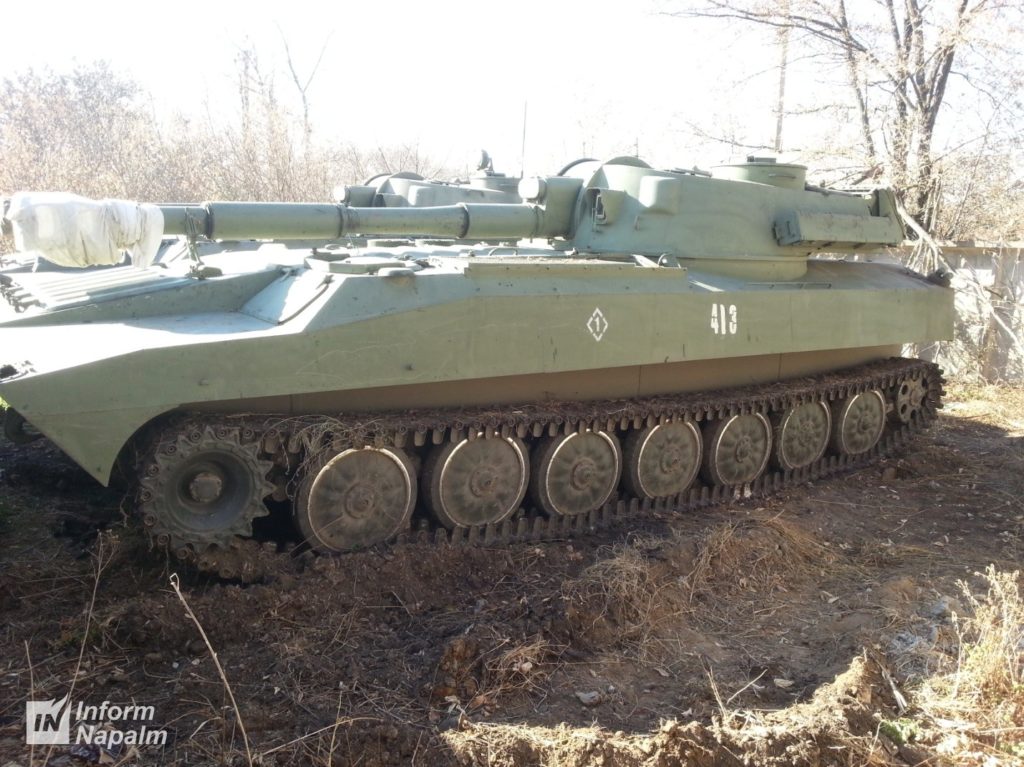 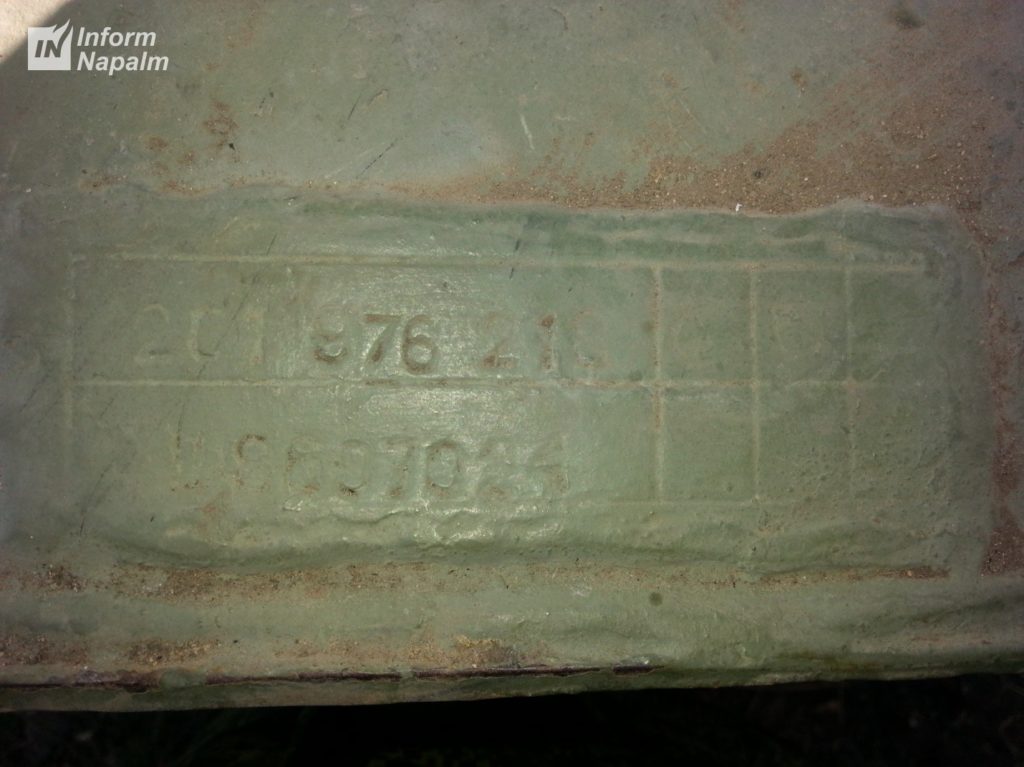 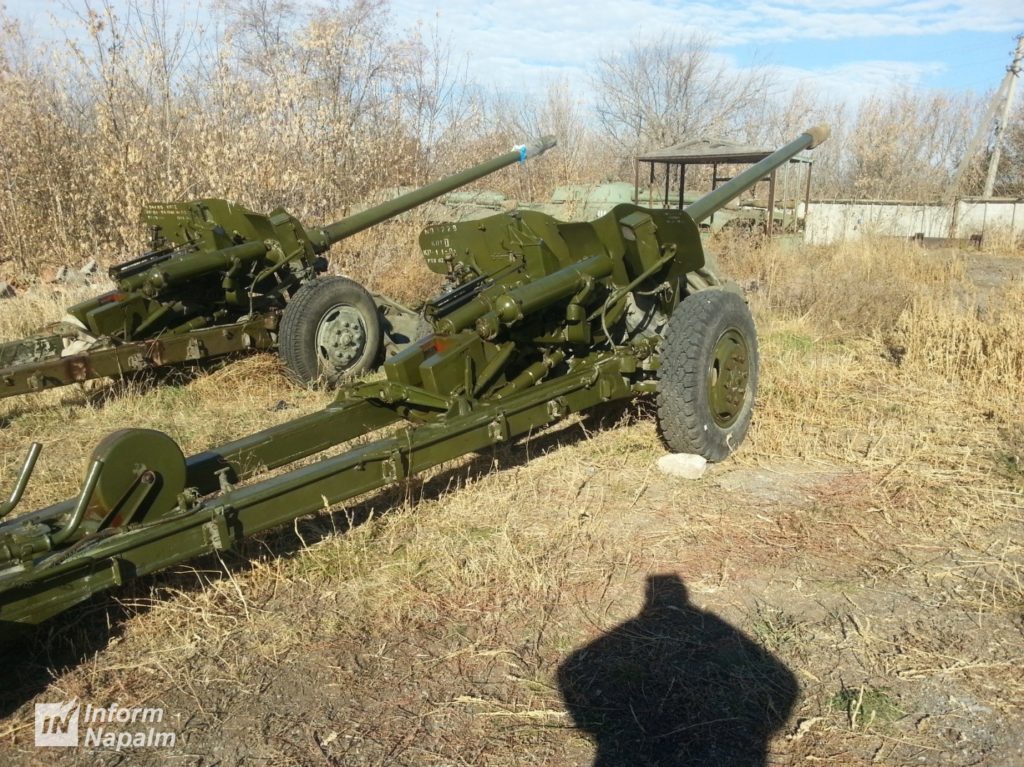 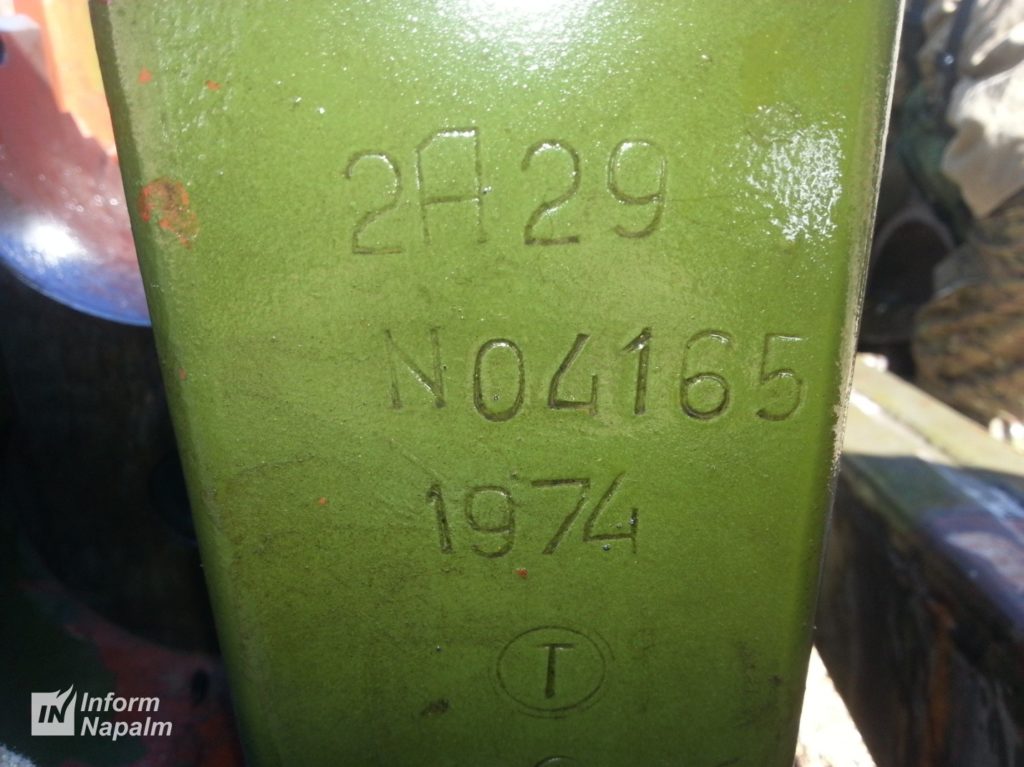 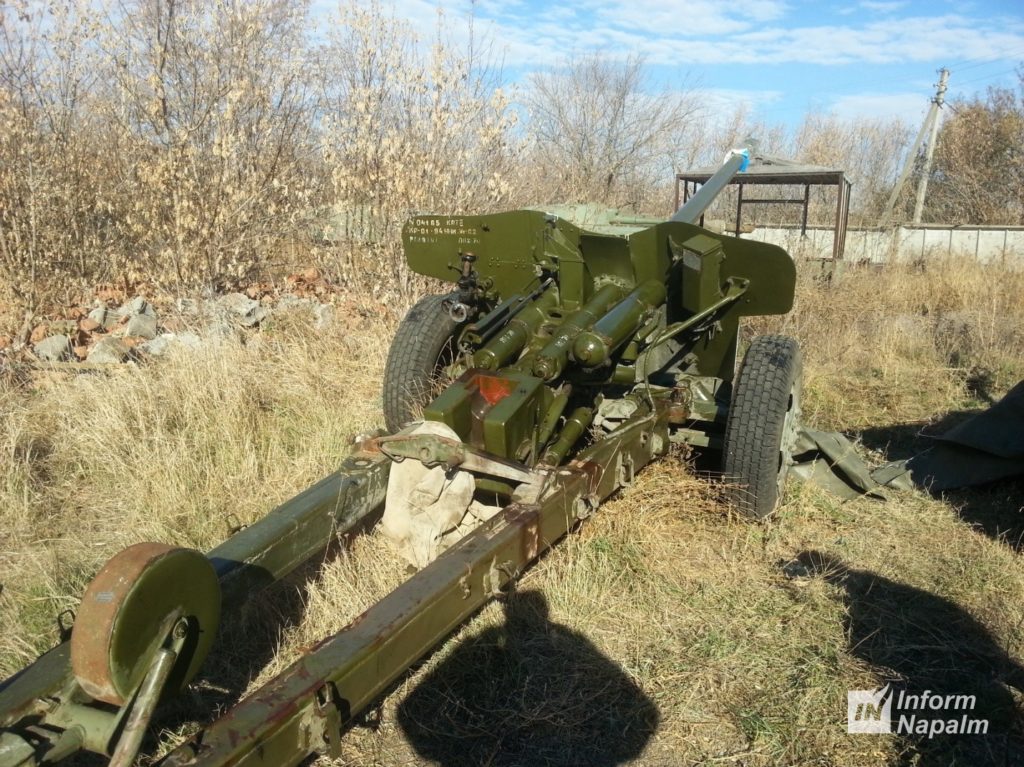 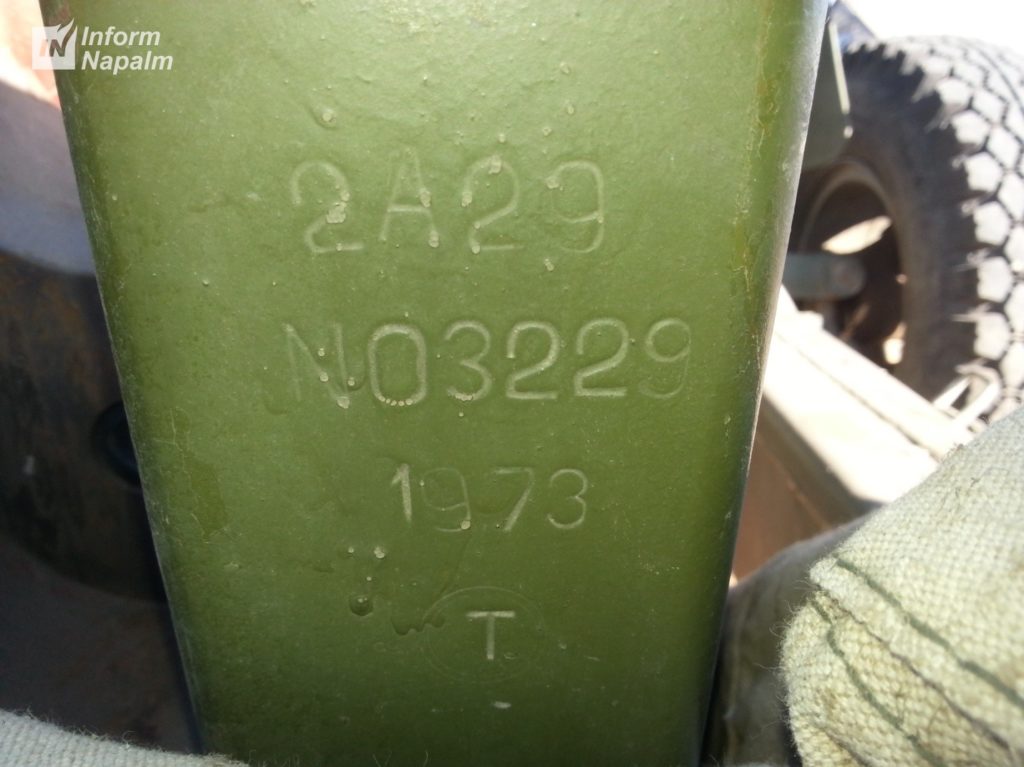 Analysis of the Russian report about work of the OSCE SMM

In addition to the geolocation of the base where the withdrawn weaponry is stored, surpher provided us with a link to a video footage of a Russian propaganda channel, filmed at the base in the village of  Ulyanivs’ke. The video is showing the arrival of experts of the OSCE SMM to the base and verification of the serial numbers of the weapons. One can see on the video two Ural-4320 trucks with YaMZ-238 diesel engines (their distinguishing features are that an air filter is mounted on the right wing and an extended engine compartment)/ Mass production of this modification began in 1994; it has never been supplied to Ukraine. 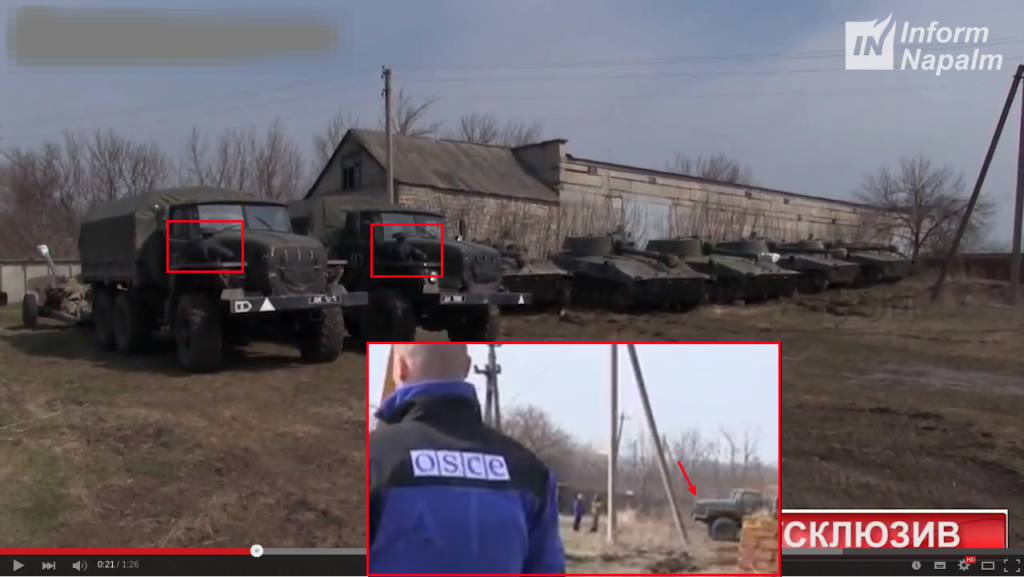 A screenshot showing a notebook of the OSCE officer is of special interest. He wrote down serial numbers of the 2A29 anti-tank guns: #04165 and #03229 that coincide with the numbers of guns from the “MGB DPR” mailbox. Also recorded in the notebook is a serial number of a 2S1 Gvozdika howitzer – #978294, which was not seen in the documents before. 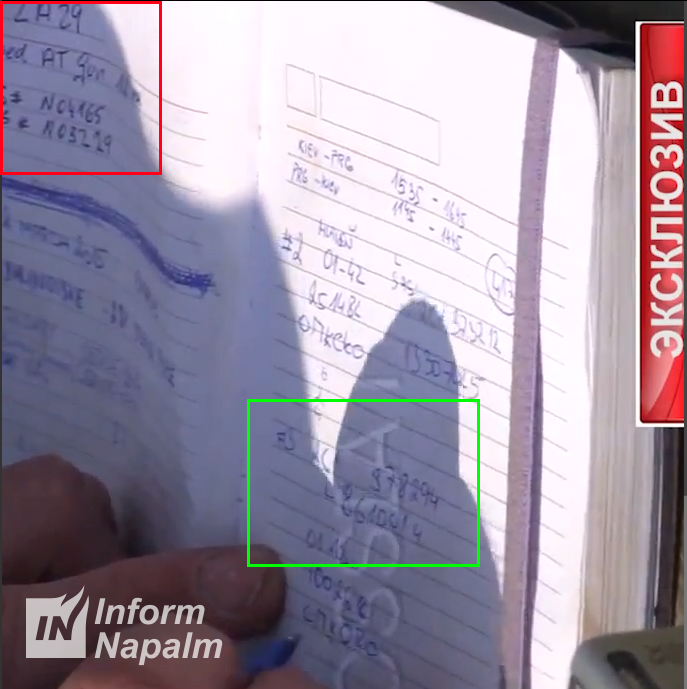 Another interesting point is the fact of swapping the 2S1 Gvozdika howitzer with a vehicle number 416 by the Russian terrorist forces. 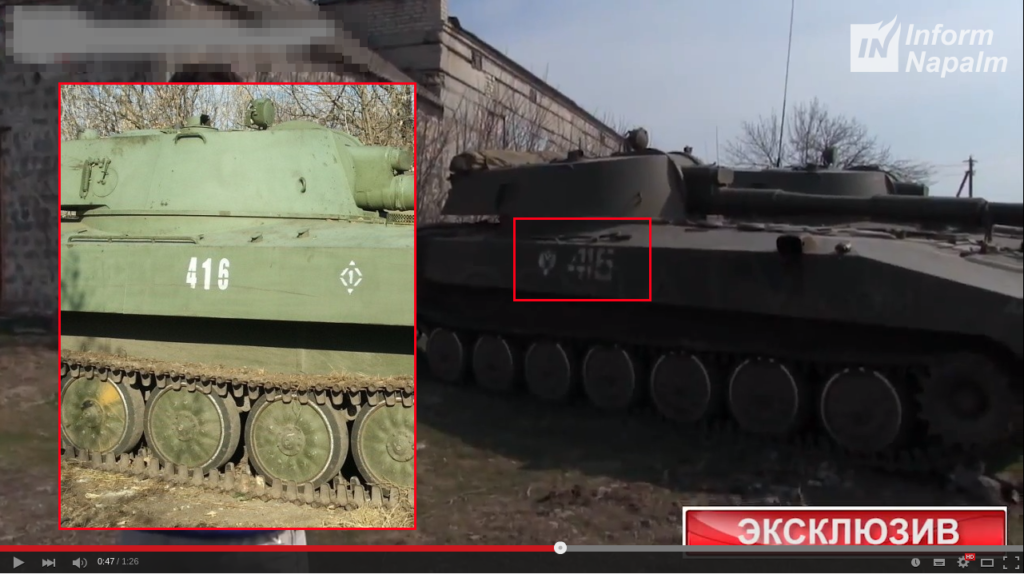 Similar incidents of the swapping of equipment and discrepancies in the serial numbers were recorded by observers of the OSCE mission more than once (link , link , link).

In the course of the investigation, using information from different sources, such as photos from the “MGB DPR” mailbox  and a video recording of work of the OSCE SMM, the facts of repeated concealment and swapping of weapons with a caliber over 100 mm by combined Russian-terrorist forces and use of the weapons, which could not be obtained as a result of the capture of Ukrainian military units in the east of Ukraine, were presented. The facts once again demonstrate the leading role of the Russian Federation in the supply of weapons to militants, and in violation of the Minsk agreements.

Information specially prepared for InformNapalm.org, an active link to the authors and our project is obligatory for any reprint or further use of the material.

No Responses to “Russian Weapons in Donbas: Analysis of the “MGB DPR” and OSCE Documents”