Sailors of missile cruiser Moskva awarded for aggression against Ukraine 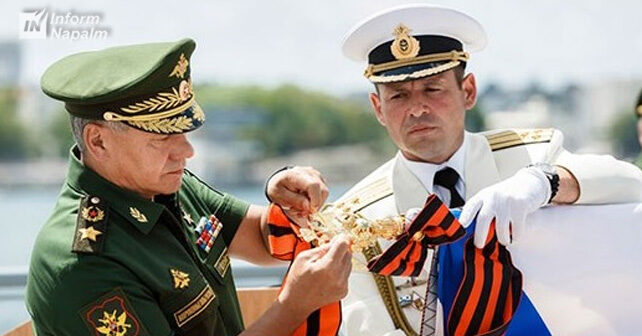 The Russian Federation continues its hybrid wars not only against Ukraine, but also in other parts of the world. So on December 25, during a joint press conference with Tunisian President Kais Said, Turkish President Recep Tayyip Erdogan said that there are now 2,000 mercenaries of the Russian private military company (PMC) Wagner in Libya. In addition, this week the media reported that in Syria, the Russian military delivered another airstrike on a school: 10 people died, 6 of them were children. The Russian military operation in Syria has been going on since September 2015. Since then, Russia has several times announced its successful completion, but the bombing of the civilian population of Syria by Russian warplanes continues to this day. InformNapalm international volunteer community in response to these war crimes of the Russian Federation has repeatedly exposed and published personal data of the Russian air force crews involved in Syria. A total of 116 officers of the Russian air force were identified. This information has been translated into 13 languages. Today we continue to expose the data of those who took part in the Syrian operation. This article is dedicated to the navy.

This article will focus on the exposing of some officers from the missile cruiser (MC) Moskva of the Black Sea Fleet of the Russian Federation, which in the second half of 2015 headed the Russian naval task force in the Mediterranean Sea and served as the permanent headquarters of the entire Russian operation in Syria. For this, the sailors received awards, the commanding office got a promotion, and the ship itself also received an award.

While studying the pages of the MC Moskva crew members, volunteers of the InformNapalm volunteers noticed the presence of not only awards for their participation in the special operation to seize Crimea, but also awards for aggression against Syria.

Vitaliy Kozenko (Russian: Козенко Виталий Геннадьевич), born on 8/26/1993 in Rostov-on-Don, Russia. In 2015-2016 he did his conscript service on the MC Moskva of which he published a post on his VK social network profile.

He was awarded the medal of the Russian Ministry of Defense for the participation in the military operation in Syria.

Has the status of a war veteran.

Army photos started appearing in his photo album in October 2015. He posted a photo of the MC Moskva with the caption: “I’m serving on MC Moskva”.

He also posted a photo of a pennant with a combat mission indicated on it, which was carried out by the MC Moskva in Syria: “Air defense protection of the Russian Khmeimim airbase in Syria. 09.24.2015 – 01.09.2016”

He was awarded the medal of the Russian Ministry of Defense for the participation in the military operation in Syria.

Has the status of a war veteran.

As of January 2018, he served in the traffic police.

He also served on the Moskva cruiser. Suvorov did not mention his duty station on his social media page, did not post any photos of the ship, but in his album he has shared army photos with Vitaly Kozenko.

Kozenko is leftmost, next to him is Suvorov

Suvorov is also identified in photographs in Kozenko’s album.

Suvorov is in the center in the first row, Kozenko is first on the left in the second row

Suvorov is first on the left, Kozenko is in the center

He was awarded the Medal to Participant of Military Operation in Syria.

Suvorov photographed the medal and the certificate so that the number of the military unit and the name of the commander were not visible. But the personal signature of the ship commander is partially visible and it is identical with the signature on the certificates of other individuals involved in our investigation. 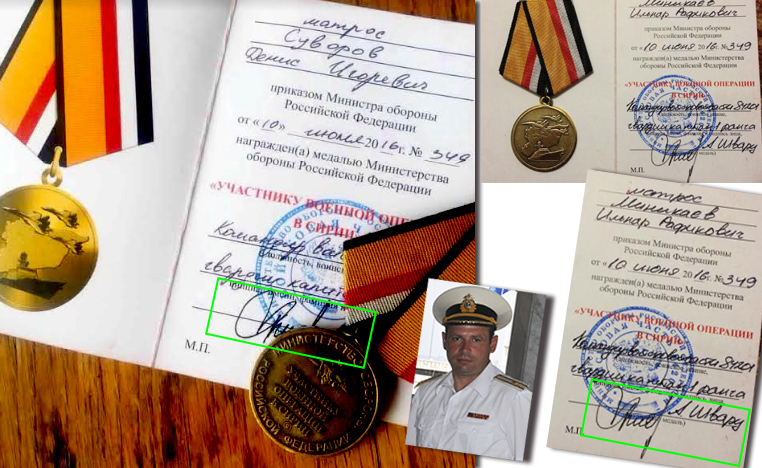 The subjects of this investigation were awarded for participation in the military operation in Syria by the order of Defense Minister of the Russian Federation No. 349 of June 10, 2016. The award documents were signed by the commander of the MC Moskva in 2015-2016, Guards Captain of 1st Rank Alexander Schwartz  (Russian: Шварц Александр Тиборович). 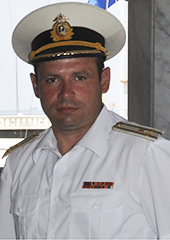 The cruiser itself was awarded the Order of Nakhimov by decree of Russian President Putin. On July 22, 2016, Russian Defense Minister Shoigu presented this award on the ship. In Kozenko’s photo album, there are photographs from this event.

Captain of 1st Rank A. Schwartz was also rewarded: as of October 2019, he was promoted to the position of squadron commander of the Primorskaya Flotilla of the Pacific Fleet of the Russian Federation.

At the time of the special operation to seize Crimea MC Moskva was part of the 11th Brigade of Anti-submarine Ships (11th BASS). In December 2014, the 30th Division of Surface Ships of the Black Sea Fleet of the Russian Federation was reestablished on the basis of the 11th BASS (1, 2).

At the end of 2012, it was reported that the MC Moskva was downgraded in status i.e. stripped of the right to be a separate military unit, and therefore also have its own official seal (before that the cruiser had carried military unit number 22813). This decision was made by the General Staff for all ships in order to prevent abuse by the ship commanders. “The commanders of the ships put seals wherever possible. Several times the military prosecutor’s office identified cases when unscrupulous commanders of ships had put seals on fictitious documents, which had been then sold…” –  this is how the representative of the General Staff of the Russian Federation commented on the decision.

As of 2016, as evidenced by the award documents of the individuals involved in this investigation, MC Moskva got its separate military unit status reinstated. The certificates indicate the number of the military unit 84201.

The wife of one of the seamen – Alsu Minikaeva – posted a photo of the announcement addressed to the sailors of the cruiser in a public group. The announcement contains comprehensive unit information: mailing address, ship name and military unit number.