Separatist Militant: “On the 1st of January the Kremlin Began an Open War against the Russians in the LPR and the DPR” 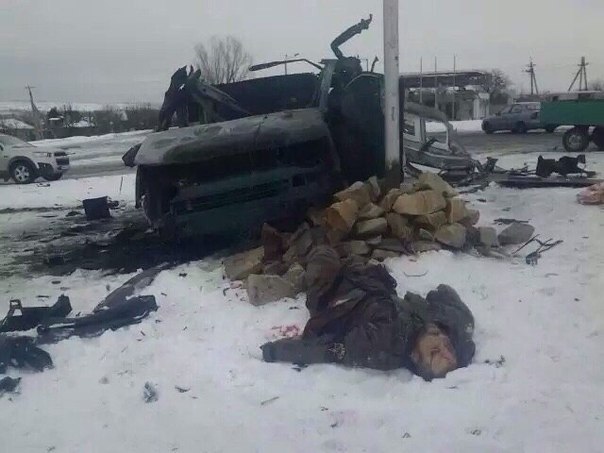 On January 2, one of the militants of the Luhansk People’s Republic (LPR), who writes under the nickname vlad burtsev in his blog, published revelations of another Russian rightwing activist about the actual state of affairs in the LPR. He made his conclusions after the murder of Alexander ‘Batman’ Bednov, the chief of staff of the so-called ‘4th Separate Motorized Rifle Brigade’ of the LPR.

InformNapalm has never previously published a material written by terrorists. However, this time we want to make an exception, so that you could learn the mood prevailing among the separatist fighters. So, let the militant speak:

Batman, a.k.a. Alexander Bednov, is a militia commander, one of those who personally brought down a Ukrainian Su-25 with a MANPAD. [Igor] Plotnitsky is one of the former officials of the Ukrainian administration in Luhansk. Mr. Plotnitsky was appointed by Putin’s regime to be a head of the LPR.  Batman is a combat commander who has earned respect in battles. Now Mr. Plotnitsky attempts to destroy the respected LPR’s militia commanders to establish authoritarian regime in favor of Russian and Ukrainian oligarchs, an anti-people’s regime.

I’ll tell for myself. I remember Mr. Plotnitsky the best for the way he commanded the unloading of mattresses in the ‘Zarya’ [Russian: ‘dawn’] Battalion. I was one of the rank-and-file soldiers of the battalion in July. At the time belonging to the battalion was not considered to be a disgrace; but now the Dawn Battalion is called ‘Down the Drain’ and is regarded as a personal guard of Mr. Plotnitsky.

So, here we are. One of the children’s summer camps in the suburb of Luhansk gave a truckload of mattresses for the fighters of the battalion. The truck drove to the base, stopped in front of a warehouse on the edge of the square. Next to it, there were soldiers of the 6th supply platoon; every rookie goes to this unit, later they are distributed among combat units.

So the recruits are waiting for a man with the key for the warehouse. Mr. Plotnitsky, then a Defense Minister of the LPR, saw the mattresses, the recruits unloading them from the truck bed,… and stormed to the truck. “What are you doing?! Where are you taking the mattresses?! Who ordered this?! ” And [you see] this unpleasant bulldog’s face with the sagging cheeks and second chin.

Someone explains to Mr. Plotnitsky: we are waiting for the key to unload at the warehouse. Mr. Plotnitsky with two of his guards from the Russian special forces standing aside, calls one person passing by, then another smoking over there… After a couple of minutes the warehouse key is found, and Mr. Plotnitsky, the Defense Minister, the most important military rank of the self-proclaimed republic, is overseeing the unloading of the mattresses and placing them in the warehouse, from the start to the end. When the 6th platoon finishes the job, the Defense Minister personally closes the warehouse and leaves, the guards from the Russian special forces follow behind.

“The Minister of Mattress Defense!”

Mr. Plotnitsky was usually at the staff headquarters or around it; the military staff headquarters of the LPR militia were located on the base of ‘Zarya’ battalion. When [Ukrainian] sabotage groups started shelling mines, [he was] more often inside than outside. His appearance and manners didn’t draw out any special respect, he seemed like a man by chance in the militia, had the look of a typical Soviet bureaucrat.

On December 29, Pavel ‘Batya’ Dremov, the commander of the Cossack Regiment of the LPR, made a statement on the Internet. Along with the other militia fighters (keep in mind, some of them participated in the capture of the building of the Security Service of Ukraine in Luhansk that started the liberation of the Luhansk Oblast from the oligarchy of the Kyiv regime). Ataman Dremov accused Mr. Plotnitsky, the current head of the LPR, of stealing humanitarian aid and betraying the people of the LPR, and demanded from the Russian President Putin to dismiss Plotnitsky.

Mr. Plotnitsky is the absolute Kremlin’s protégé, Mr. Surkov’s protégé to be precise. Mr. Surkov, in turn, is the main architect of the transfer of the DPR [Donetsk People’s Republic] and LPR back to Ukraine. If something happens to anyone from the video statement, Dremov promised to publish some information from a memory SD-card “which is in his pocket”.

One can assume what is on the memory card. Russian FSB officers, together with the new authorities of the LPR and DPR, sell coal of the people’s republics to Ukraine. The same characters steal property of the republics or transfer it to Russian oligarchs. Most likely, Dremov has specific schemes and records of secret negotiations and specific names.

In four days, the Dremov’s video got about 500,000 views on YouTube. Can you imagine it?! During New Year holidays 500,000 views of the political statement of the Cossack unit fighting for freedom of the LPR (for example, Putin’s New Year’s address on December 31, 2014 got  less than 400,000 views)! On the night of January 1st and early morning of January 2nd, the average number of views was increasing by 1,000 per hour. No other video about the war in Donbass has gained such popularity. It’s simple: Dremov voiced what really happens in the LPR, why militia fighters started being disappointed in their rebellion, in their war against the oligarchic anti-Russian Kyiv regime.

On the first day of 2015, the Russian secret services together with people loyal to Mr. Plotnitsky began to weed out militia fighters opposed to the transfer of the LPR back to Ukraine. The first [victim] was Alexander Bednov known by his call-sign ‘Batman’, who was a commander of the rapid response team (RRT) of Luhansk. Mr. Bednov frequently visited the Zarya Battalion base to receive ammunition. At that time, Zarya’s base in the former district military enlistment office [viyskomat] was the main arsenal of the Luhansk insurgents.

Weapons and equipment from Russia were brought there, and then they were distributed to the units. Plotnitsky monitored this flow [of weapons]. In addition to local natives, there are many volunteers from Russia in the RRT. The RRT includes a sabotage and assault reconnaissance group called ‘Rusich’ which consists of Russian nationalists. The fighters from Rusich were with Alexander Bednov when they were attacked by Mr. Plotnitsky’s people and, most likely, the Russian special forces. We can assume that the next in line for the ‘cleansing’ are well-known and charismatic militia commanders like Pavel Dremov and Aleksey Mozgovoy.

Popular and charismatic commanders of the DPR have already been weeded out without blood. Igor Strelkov was the first to be removed from command back in mid-August. In late December, the arrests of the left-wing activists of the DPR started.

It is an astounding situation: the militia, which acts as an ally of Russia, has been fighting for the interests of Russia, now is been destroyed by Russia itself. The main reason is that the Putin’s regime is trying to prevent the formation of genuine people’s republics near its border. There is Russian active duty military personnel in the people’s republics [armed forces], because of them the counter-attack [on Ukrainian Army] back in August was successful. But now this military personnel is being transformed into an occupation force. The Russian army is becoming to the people’s republics exactly what the einsatzgruppen of Mr. Poroshenko and Mr. Kolomoiskyi are.

The reader should have no illusions: Russian units (I am not talking about volunteers, but about active duty Russian servicemen who came to Donbas on the orders of their commanders) participate in combat for a paycheck. Last August, Art of War almanac published an extensive interview about this with one of the members of the Russian special forces. He talked about the salary of the Russian military personnel, as well as social benefits for them from Russia. The speaker called the ideologically and morally motivated Russian people, who came voluntarily to fight alongside the local militia, simply ‘morons’. Therefore, the Russian army fights for the money.

The militia fights for the independence of the LPR and DPR, for the establishment of more just and free states in their territories. The Putin regime is trying to transform the LPR and DPR into horrific freaks, some sort of puppet Congo where the corrupt regime with its well-armed military will keep the local population in check for the service of officials from Moscow. This kind of situation has been implemented already, for example, in South Ossetia. If necessary, Mr. Putin and Co will give the LPR and DPR back to Ukraine.

Igor Strelkov, who said that Putin acted as the guarantor of the unity of the Russian Federation, no longer has the moral right to support Putin. Most likely, the Russian special services assassinated Alexander Bednov and the accompanying fighters from the RRT. Bednov died, five or six militia fighters died as well.

On the 1st of January, the Kremlin began an open war against the Russians in the LPR and DPR, against the interests of the Russian people. From now on, it will be a paradoxical situation: volunteers from Russia will go to the LPR to join the militia units that are not under Mr. Plotnitsky’s command, but primarily Mr. Dremov and Mr. Mozgovoy’s, to fight against, on the one hand, einsatzgruppen of Mr. Poroshenko and Mr. Kolomoisky, on the other, against the Russian army executing orders of the Putin regime”.

4 Responses to “Separatist Militant: “On the 1st of January the Kremlin Began an Open War against the Russians in the LPR and the DPR””