Soldiers of fortune: is Putin giving posthumously awards for fighting against Ukraine? 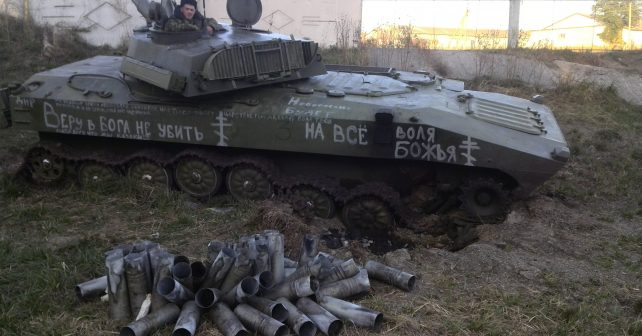 The State Duma of the Russian Federation in the first reading passed a bill allowing short-term military contracts on counter-terrorist activities outside the borders of the Russian Federation. Before, a regular soldier or a civilian enrolled as soldier, seaman, sergeant or sergeant major could sign their first contract for the term of 2 or 3 years. Now, if the bill passes all required procedures, the Russian Army will be able, if necessary, to contract conscript soldiers and civilians for short terms “until the cessation of the circumstances requiring the conclusion of the contract, but no later than one year since the military service contract effective date” (story).

Effectively, now the Russian Army will receive a sort of a separate military branch – “rent-a-soldier”, or “soldiers of fortune” by the hour.

It seems that the Russian authorities are trying to retrospectively regularize their mercenaries in Donbas, because currently their status is kind of odd. Let’s look closer. If we assume the version used by the Russian propaganda that the Russian citizens fighting in Donbas are all volunteers, their deaths raise certain questions.

During our routine monitoring of the VK network, we found a profile belonging to a user under the nick of Alexey Cossack (profile, archive). Already on April 25, the following post appeared on his page (sic!):

“You can pay last respects to Alexey on Saturday, 30.04.2016, at 13:00 at 73, prospect Krasnogo Znameni, the burial will be on the municipal cemetery, the post-funeral reception will be in the Cheops restaurant. Everybody wishing to pay their respects to him is welcome”. (post, archive).

The Cossack’s profile states residence in the city of Vladivostok which, indeed, has a restaurant under the name Cheops and there is an administrative building listed at 73, prospect Krasnogo Znameni. Most of his friends are from Vladivostok, as well. 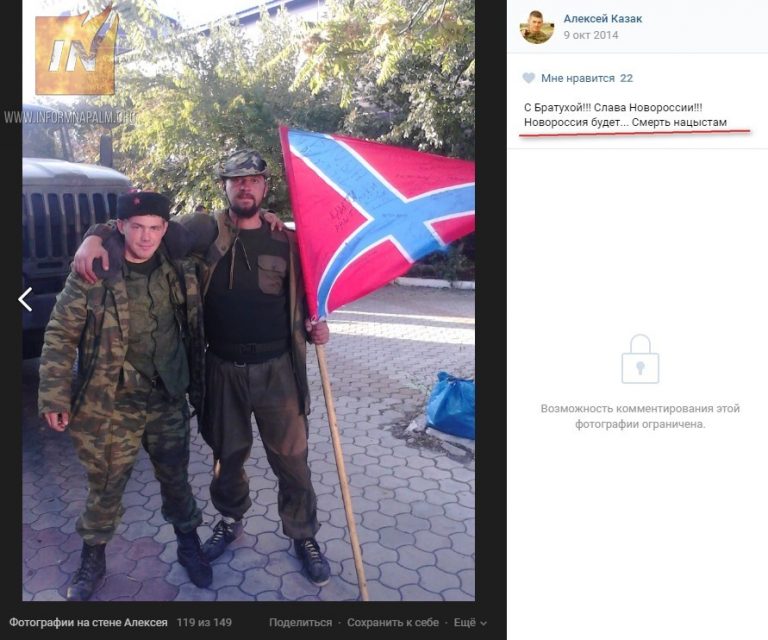 From a photo in his VK profile (page, archive), we can see that since 2014 he served in Donbas. Most probably, he was one of the crew of a Gvozdika self-propelled howitzer bearing an emotional message: “Everything is God’s will”.

On his page, the Cossack posted a video which he titled “me, personally, gunning the mercenaries from Poland. Lechs (the Poles)”:

He posted the same photo together with the video on his page (photo, archive): 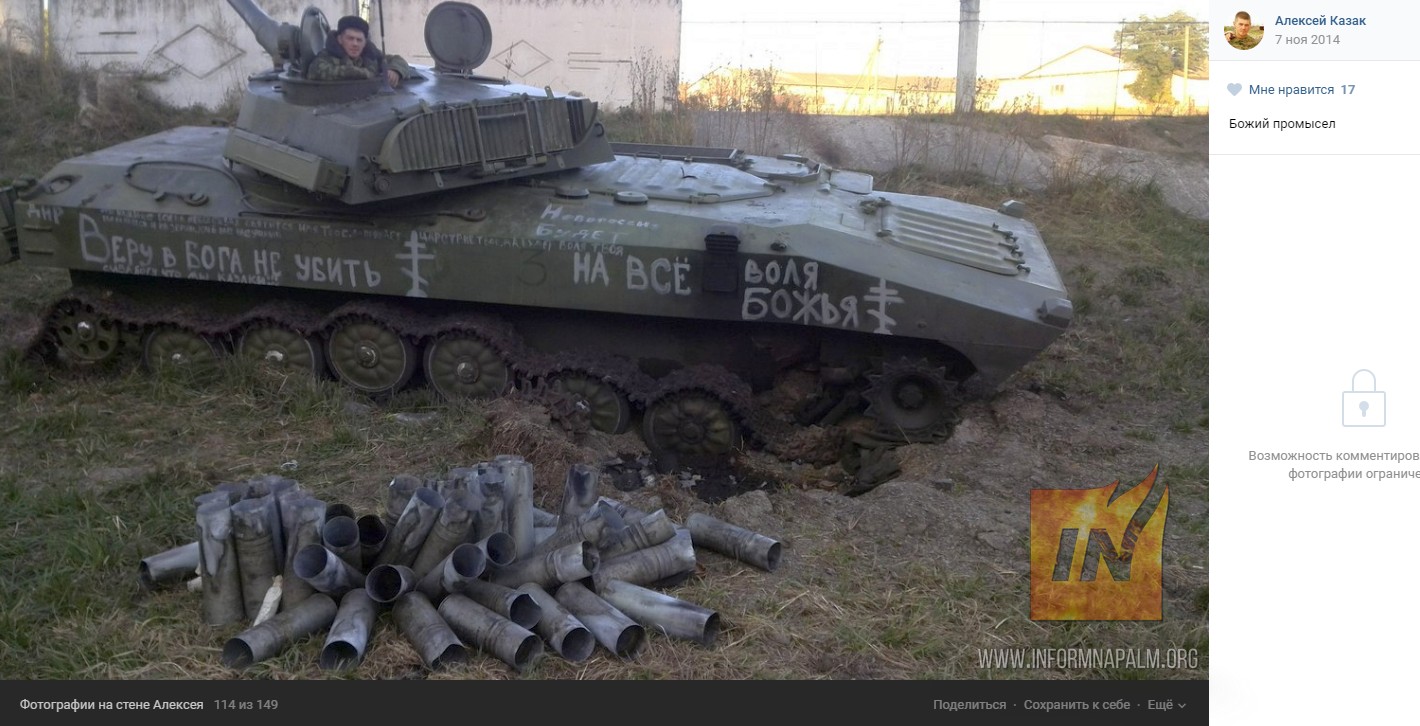 Photo: Cossack from Vladivostok searches for Polish mercenaries in Ukraine, but dies in the act

This howitzer is very popular with journalists in the Donbas and has already been caught on camera by Russian propagandists more than once (archive).

These freeze-frames from the video allowed determining the exact position of the howitzer from where shelling was performed: 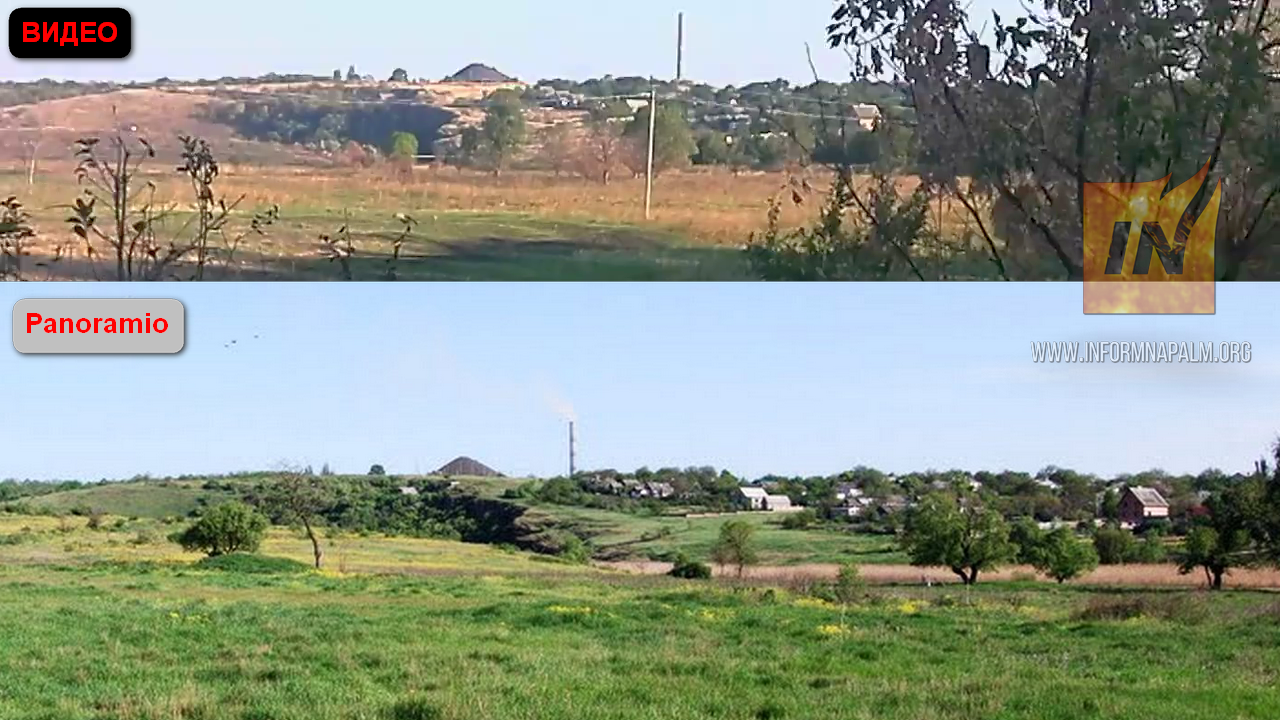 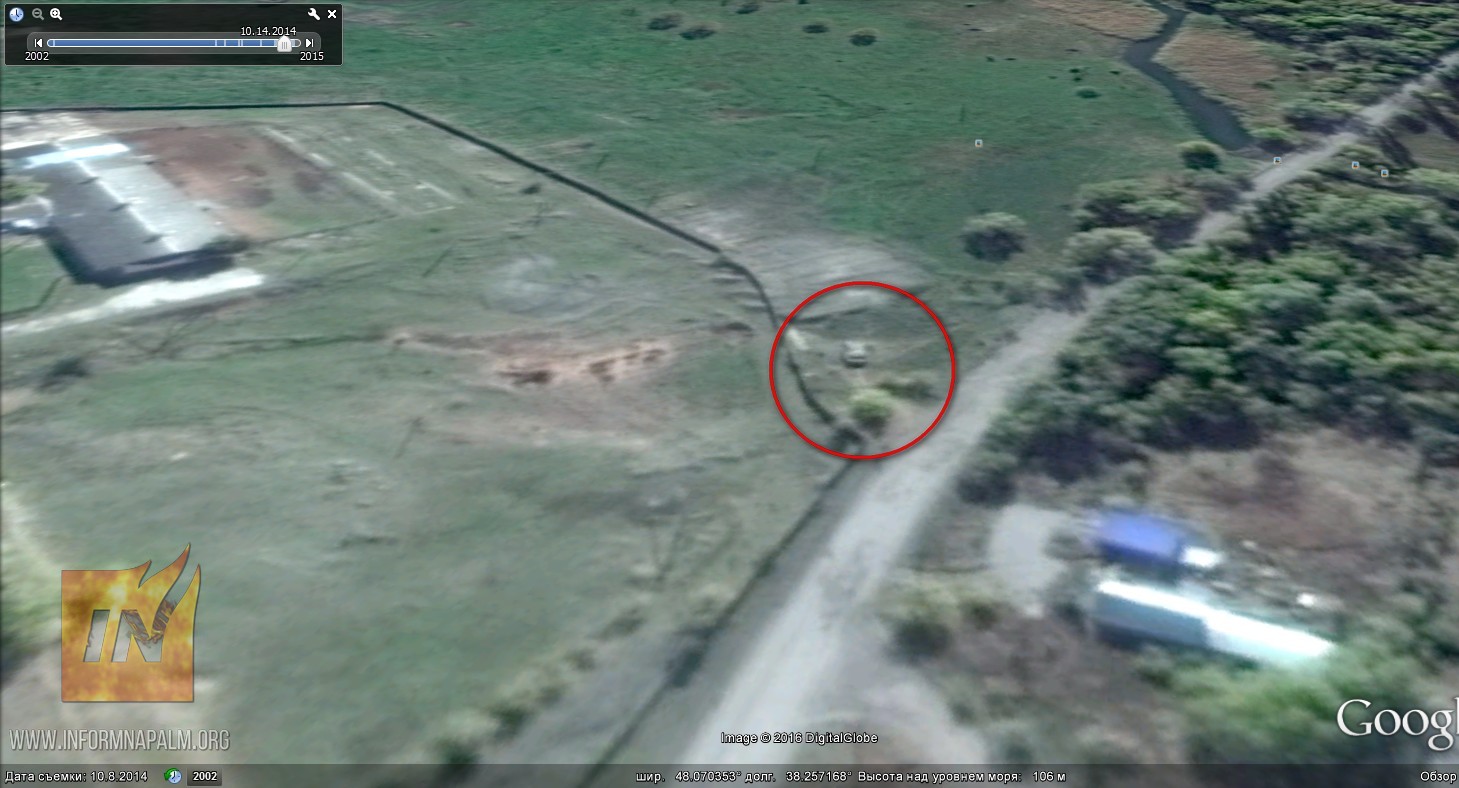 Link to the photo at Panoramio.

This is the area of Khartsyzsk of the Donetsk Oblast, exit from Zuivka town.

In April, 2016, an invitation to the Cossack’s funeral is posted on his page. And on November13, 2016, on the same page, the relatives of the deceased start posting the combat decorations which the Cossack was awarded posthumously. 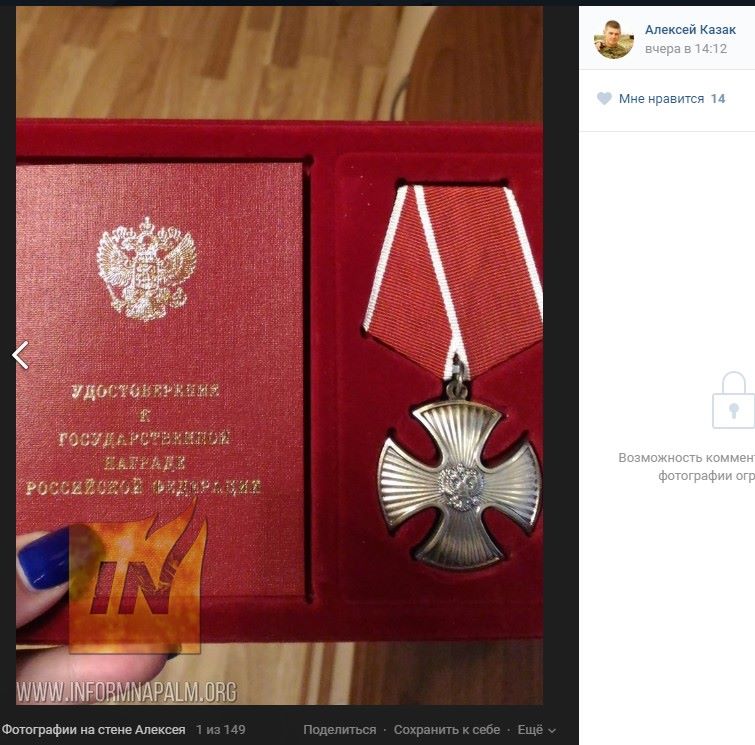 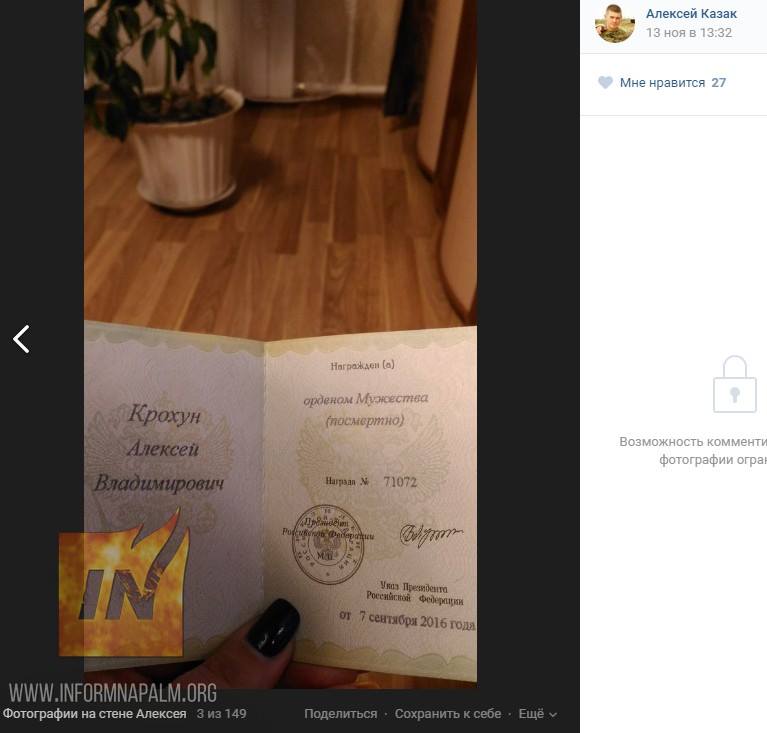 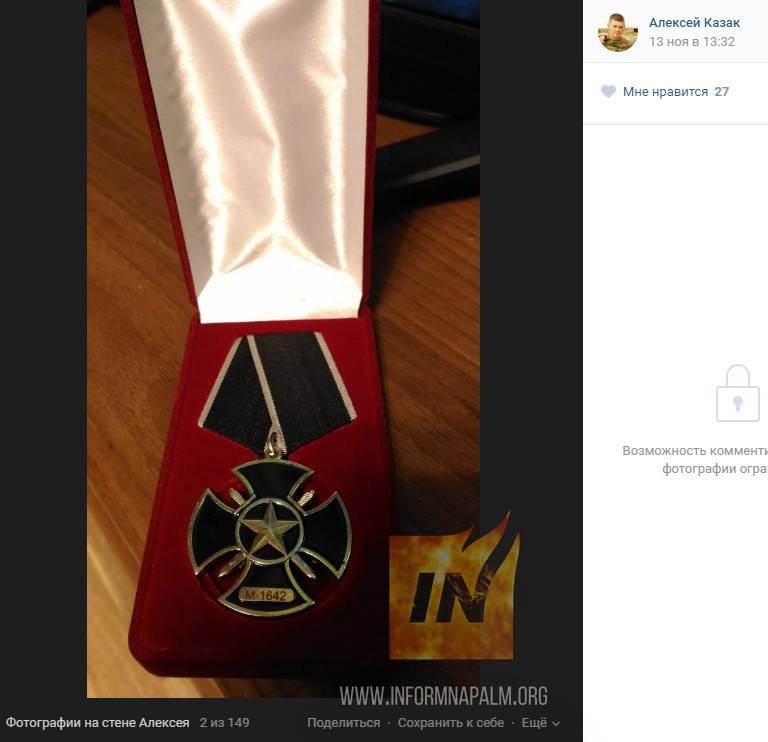 We see that Krokhun Alexey Vladimirovich was awarded the Order of Courage (award certificate No. 71072 – page, archive) by the Decree of the President of the Russian Federation of September 7, 2016. The order and the documents are posted for all to see (photo, archive).

The Statute of the Order of Courage does not give a clear definition of the achievements for which it is awarded to civilians:

“The Order of Courage is awarded to citizens of the Russian Federation who showed dedication, courage and bravery in protecting public order, fighting crime, in rescuing people during natural disasters, fires, accidents and other emergencies, as well as for bold and decisive actions committed during the performance of military or civil duties under conditions involving a risk to life” (award description).

We have already noted that in the Russian Army the Order of Courage is usually awarded to the deceased (see more details here). What could a civilian do to get such an order? Or wasn’t Alexey Krokhun a civilian?

If what is happening in Ukraine is a civil war, why are Russian citizens killed there? If the war in Ukraine is an internal conflict, why does Putin issue a decree awarding Russians for participation in this war?

P.S. We would like to specially ask Russian journalists to find out the status in which Mr. Krokhun visited Ukraine and what merits earned him an Order of Courage.

The material was prepared by Vidal Sorokin & Kirill Mefodiev.

No Responses to “Soldiers of fortune: is Putin giving posthumously awards for fighting against Ukraine?”