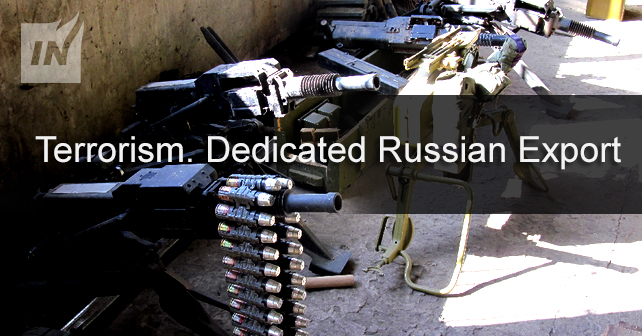 Ukrainian hacker group Trinity provided the InformNapalm international volunteer community with data for this in-depth OSINT-investigation exposing the details of involvement of a St. Petersburg terrorist in the war in Donbas, supplies of Russian arms across the border and of militant training camps in Rostov region.

The subject of the investigation is Sergey Leonidovich Astakhov, a Russian national born on October 19, 1965, passport No.4010 125052, issued on October 27, 2010; resident at 29/23 Krasnoputilovskaya Street, Saint-Petersburg; cell phone: +7 (981)-146-74-11; e-mail: sergeypiter65@mail.ru. In 1991, he “volunteered” (or so he claims) to fight in the First South Ossetian war for South Ossetia; in 2014-2015, he fought in Donbas as a member of “Odessa” (an armed terrorist group whose members are implicated in the abduction, torture and murder of Elena Kulish and Vladimir Alekhin, a married couple from Peremozhnoe in Lugansk region). Now Astakhov works as a driver/cash-in-transit guard at Russian CIT Association “Rosinkas” in Saint-Petersburg.

He was recruited in June 2014 through the so-called “Moscow  military enlistment office of the Donbas citizen soldiers”. He also exchanged letters with a certain Rustam Samrullin novoross24@mail.ru. “Rustam” sent his letters from the following IP-addresses: 141.212.108.13 (USA, University of Michigan, College of Engineering) and 5.104.224.246 (Netherlands, Snel.com B.V. (the provider)), probably, using a proxy server or Tor. Here is one of the letters:

Urgent!! IT IS IMPERATIVE that you arrive in Rostov precisely on JULY 18. Plan your journey so as to arrive in Rostov on July 18; if you get there earlier, say, on July 17, you will have to wait there until July 18 at your own expense. No point in coming on July 19: no one will meet you.  Upon arrival in Rostov, go across the station square and towards the railroad viaduct (in the direction of the bus station) until you reach the archway. A man (and a car) will wait for you there at 10:00 am, 03:00 pm, 08:00 pm, and 11 pm. You will be in civvies and have your passport on you. You will also have, in your BAGS:  a camouflage uniform, a change of underwear, socks, 3 days worth of food, a tactical vest, and, if possible, a walkie-talkie. Contact phone: 79281690434 (Rostov); call upon arrival. AVOID CALLING until July 18, unless you must (say, getting lost is not a good reason to call). Let me know if you are coming / not coming to Rostov before July 13!!

LOOKING FORWARD TO SEEING YOU HERE, THANK YOU! 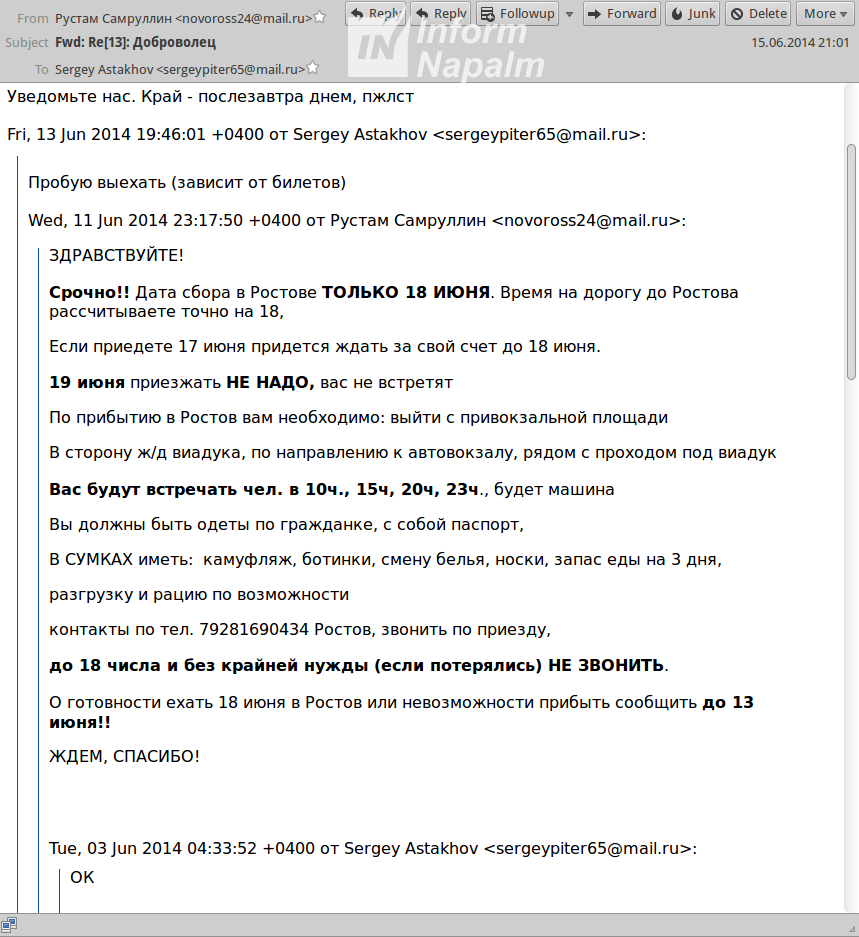 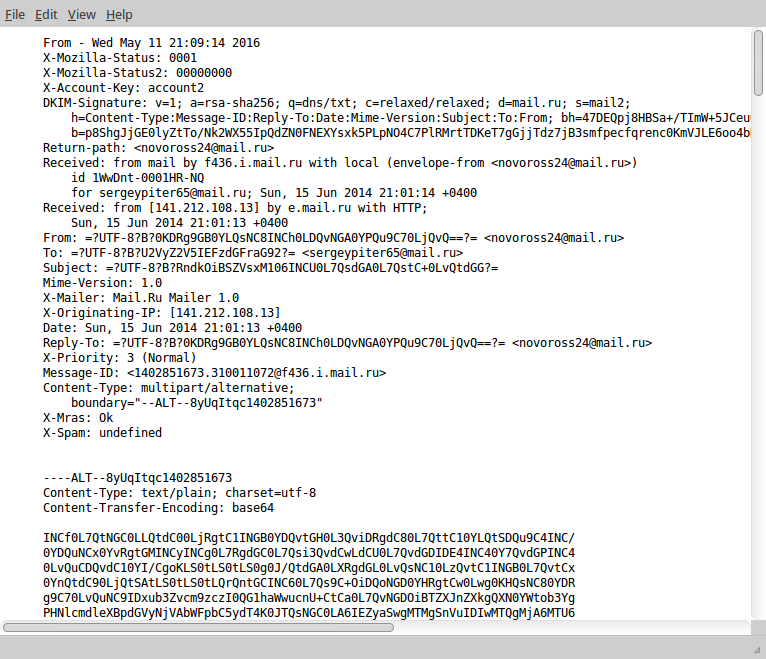 On July 04, 2014, Astakhov waited in Shakhty (Rostov region) to be transported to Donbas. Within two weeks, he was already fighting for the Dolzhansky check point. Later, in early August, his unit was withdrawn from Donbas back to Rostov region for a let-up at a military field camp. 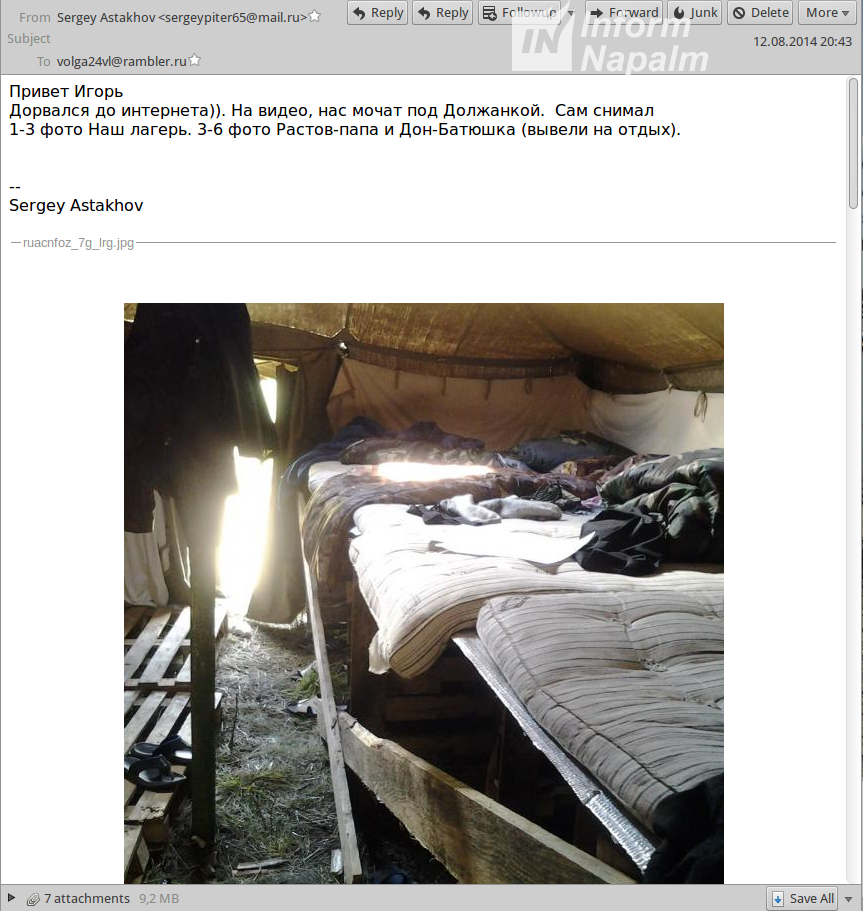 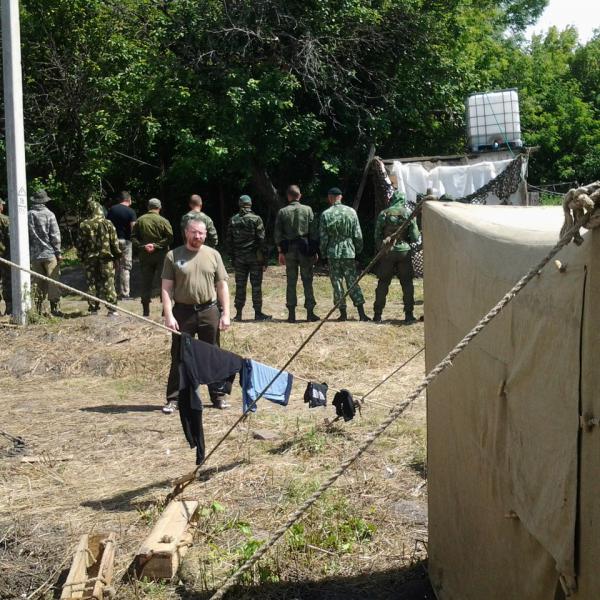 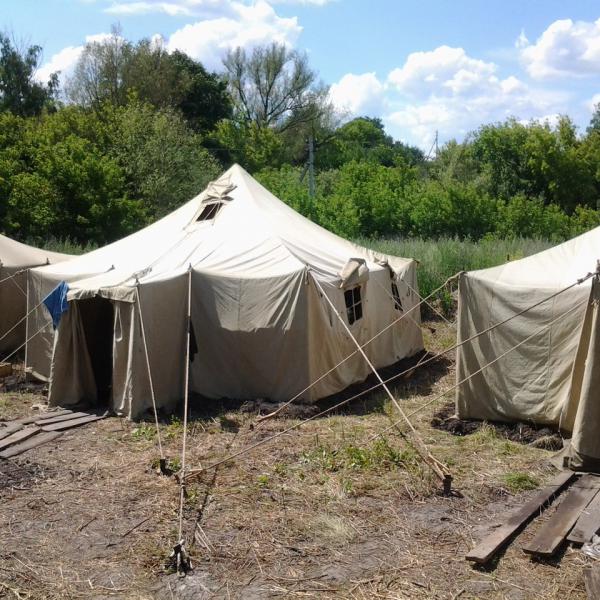 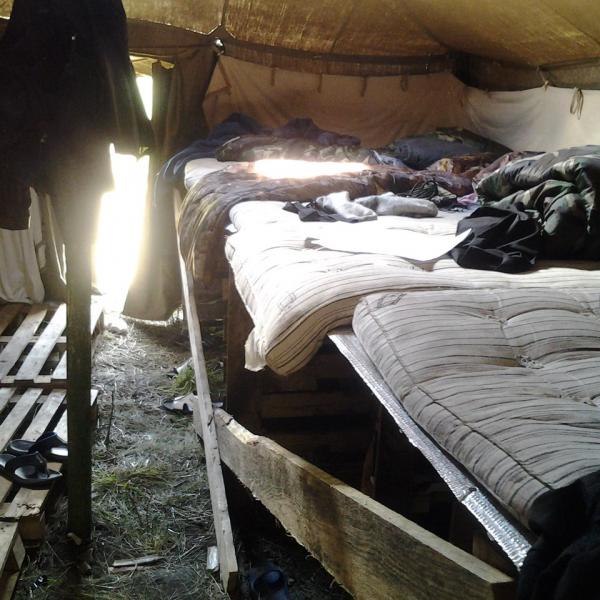 On August 29, 2014, Astakhov wrote a letter that includes the following phrase:  “Hello from Krasnodon!”. Several photos (taken, according to the EXIF data, on August 24, 2014) were attached to the letter, featuring him posing with a modern Russian version of the SVD-M Dragunov sniper rifle, an unidentified scope and a PK-M machine gun. 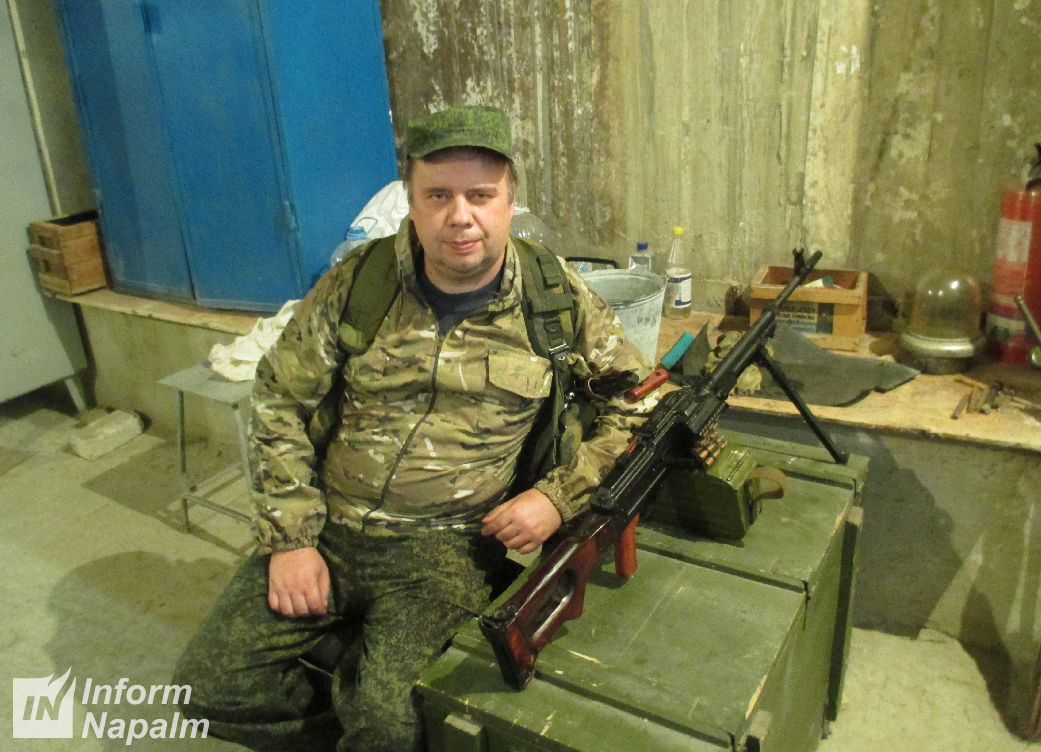 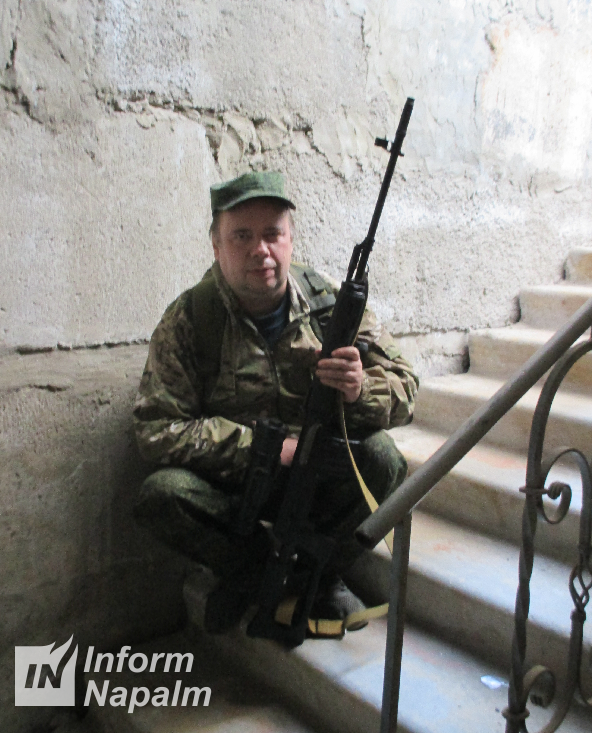 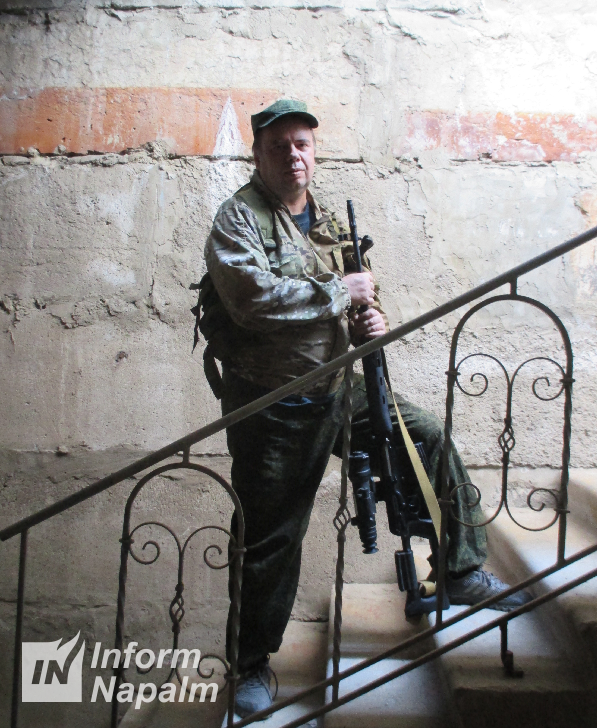 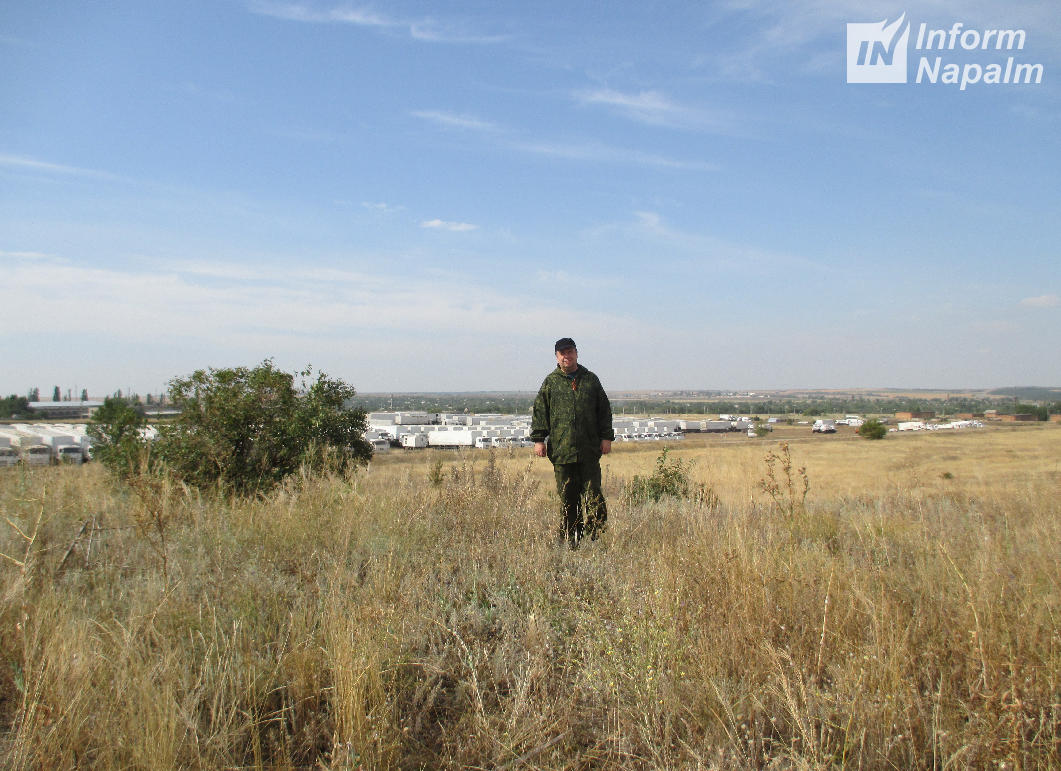 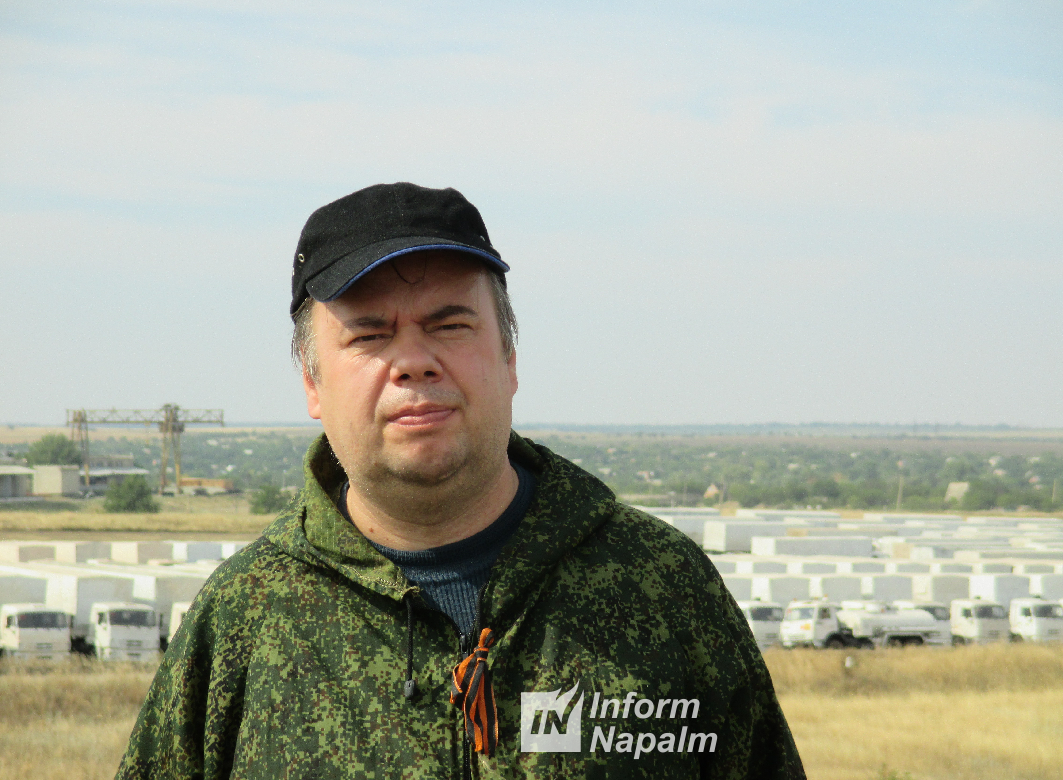 That is, at 11:39 am on August 24, Astakhov poses with the white KAMAZ trucks behind him in Rostov region, and already at 05:32 pm on 24 August with a new sniper rifle and a machine gun.

A month later, Astakhov takes a series of photos of weapons and military equipment, namely: SPG-9 and AGS-17 tripod-mounted grenade launchers, an NSV Utes heavy machine gun on a mount, 9K111 Fagot missile launchers, crates with 9M111-2 Fagot missiles, crates with 9K38 Igla portable missile launchers, a ZU-23-2 anti-aircraft cannon, and the 1989 version of Russian T-72B tank that is not operated by the Armed Forces of Ukraine and therefore could not have been captured as a trophy. 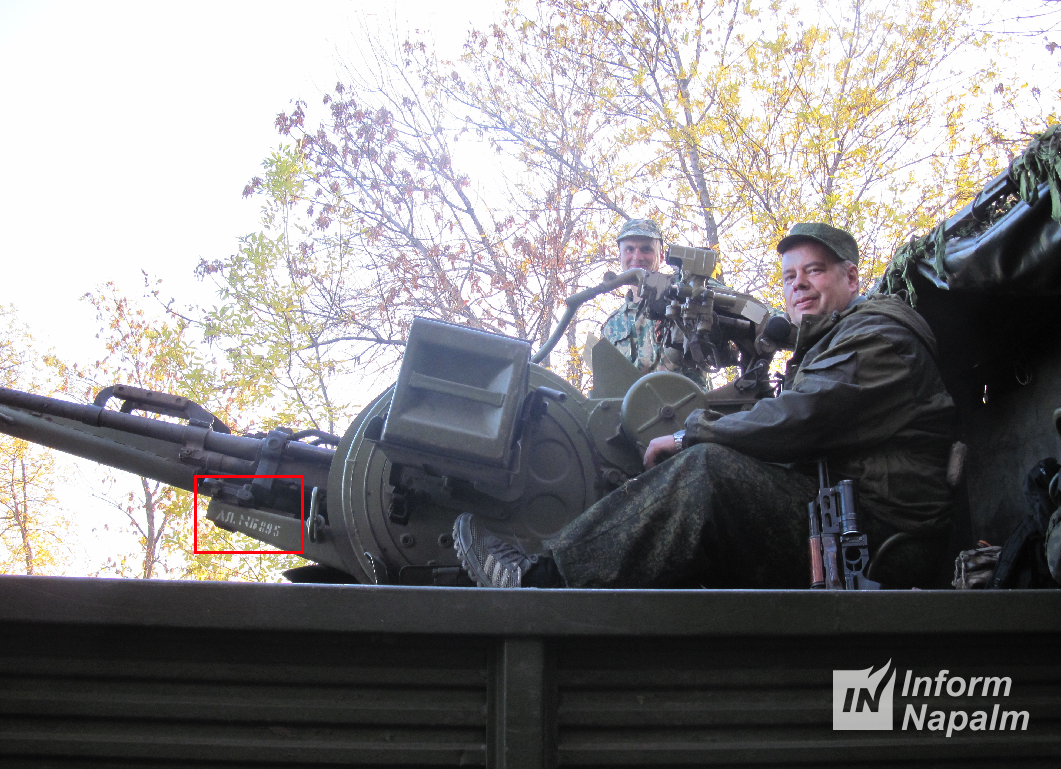 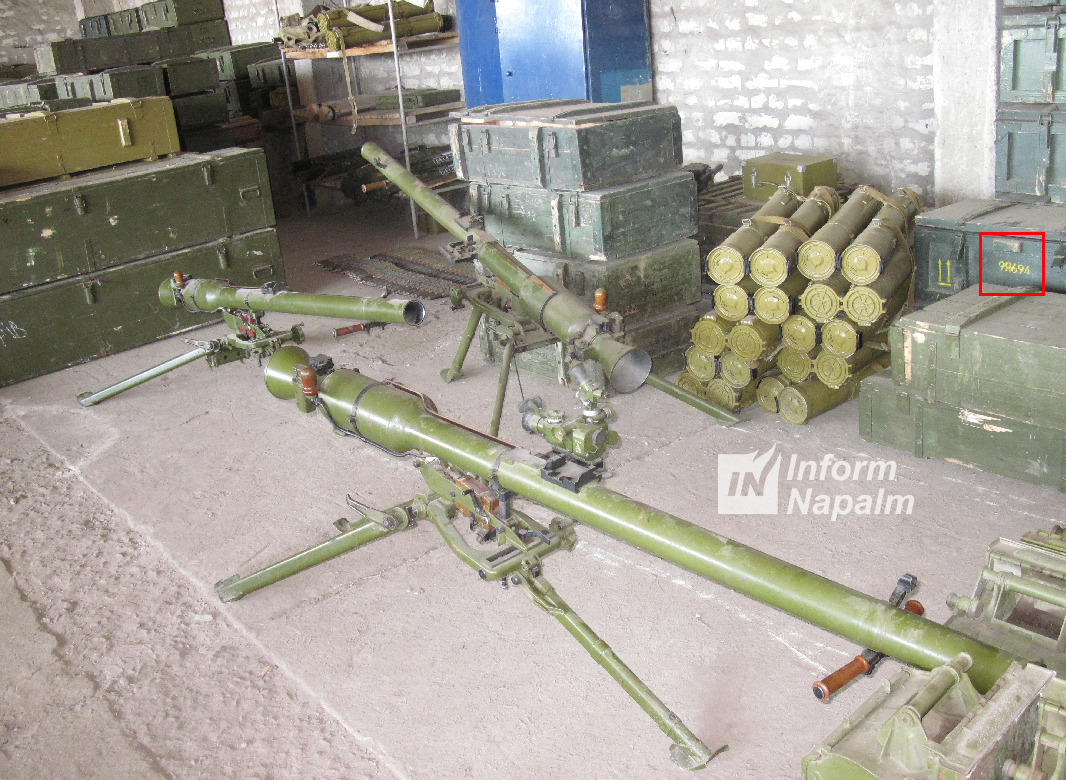 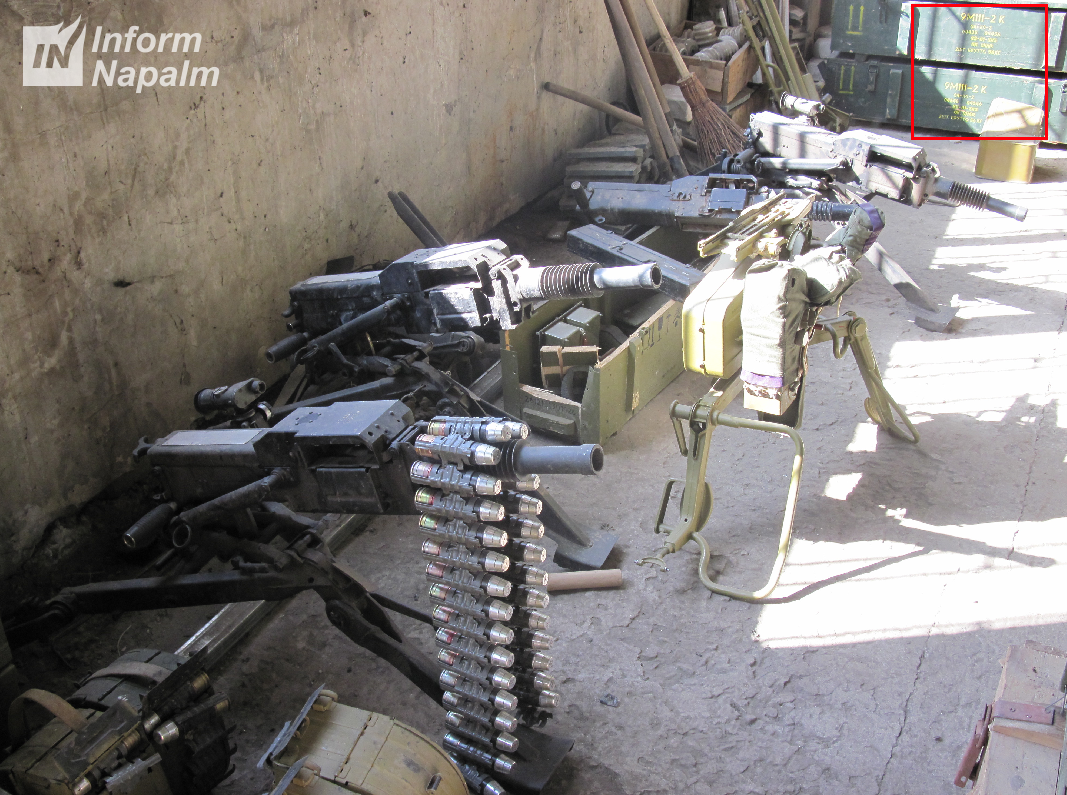 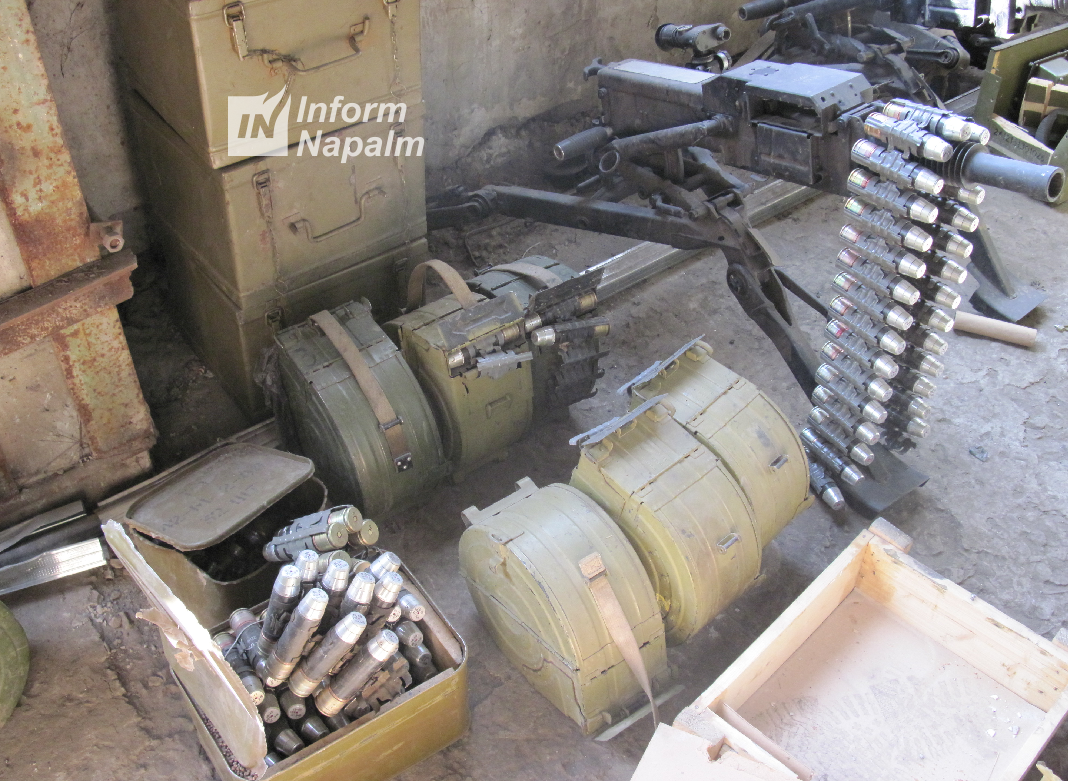 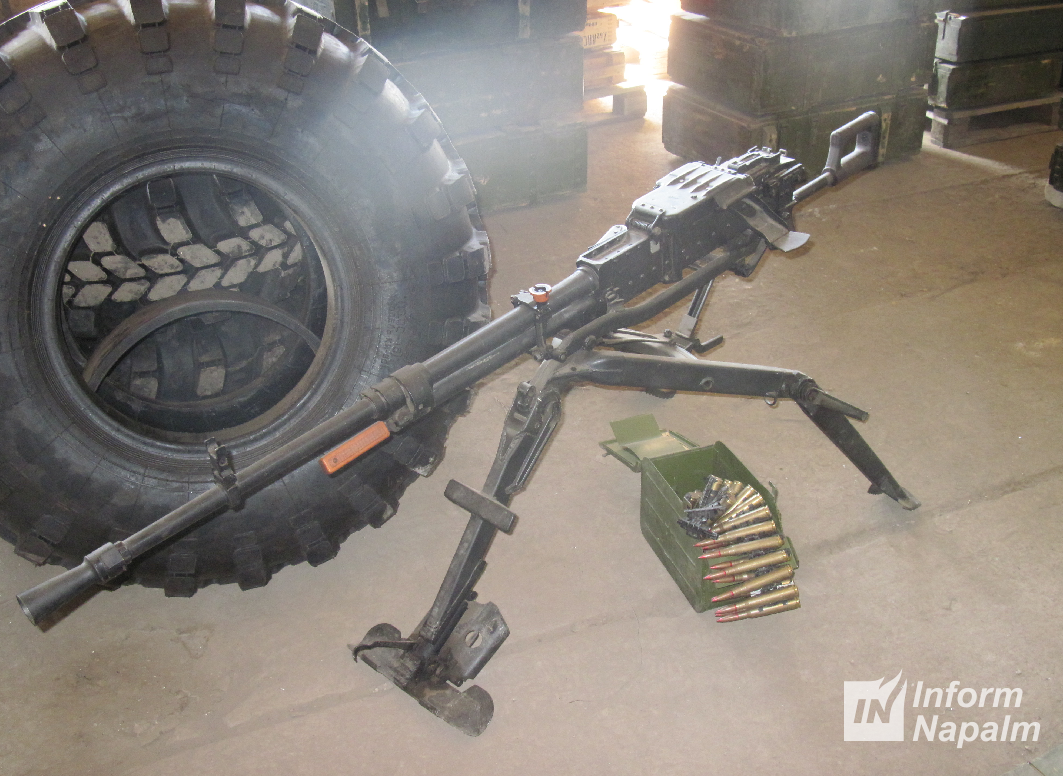 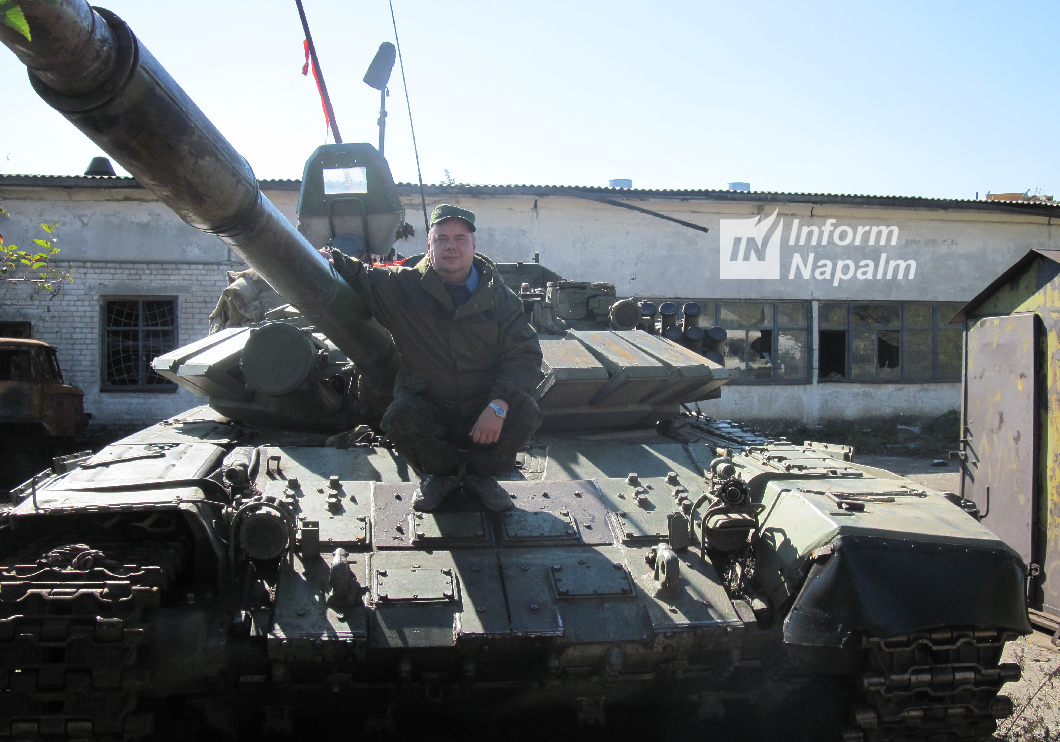 In November 2014, Astakhov apparently returned to Saint-Petersburg to raise donations (such as food, uniforms, shoes and ammunition) for terrorists fighting in Donbas. One of the letters from the so-called “diplomatic mission” of the Donetsk People’s Republic (DPR) in Saint-Petersburg headed by a Saint-Petersburg Legislative Assembly member Vitaly Milonov, instructed Astakhov on how to deliver the cargo to the occupied part of Donetsk region of Ukraine:

The procedure is as follows:
1. 1. Fill out/correct the relevant data (cargo weight, unloading address, contact details of the person receiving the cargo there, etc.) in the attached file and send it to me at dnr-spb@mail.ru. 2. Specify the unloading point on the cargo.
3. Deliver the cargo to Milonov’s warehouse in Kronstadt where it will be loaded into the truck. Address: 7 Kronstadtskoe Shosse. Shipment time should be agreed with Ivan (Milonov’s aide, +7-911-928-16-61). Trucks and porters for the transportation of cargo from Saint-Petersburg to Kronstadt will be provided by a company called “Gruzovichkov”.
To order a Gazelle van (subject to agreeing the shipment time with Ivan), give me a text at +7-931-239-47-53 specifying loading time, loading address, unloading address and a contact phone at the loading point.
4. The truck will be loaded and dispatched on Friday, December 26, 2014.
5. Tell the people on the other side that the truck is on its way. 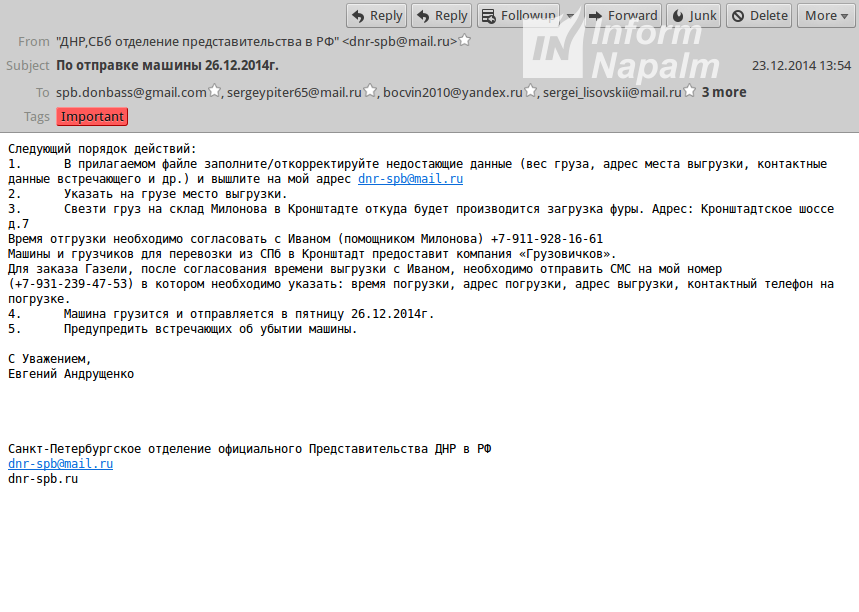 This publication was prepared by InformNapalm volunteer Mikhail Kuznetsov on the basis of data provided by Trinity hacker group.

We should like to remind that the database of InformNapalm investigations proving participation more than 60 military units of the Russian Armed Forces in the fighting in Ukraine is available at: http://bit.ly/RussianPresenceEN. We call on our readers to actively share our publications on social networks.
You can also support the site and make a donation for the development of the project at Crowdfunding. All proceeds will go exclusively into the technical support of InformNapalm.org website.