The Svitlodarsk salient separates us from Aleppo: Russian experts dream of using air force and Iskander missiles against Ukraine (VIDEO) 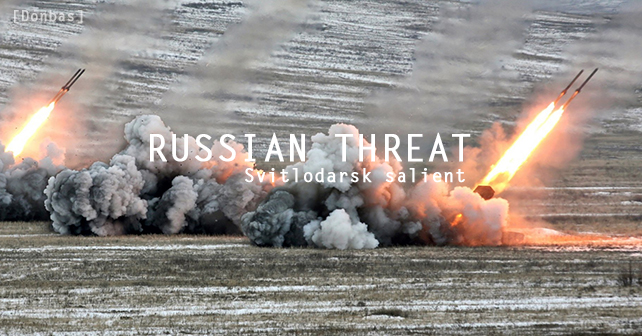 During Ukraine’s military counter-offensive at the Svitlodarsk bulge, Russian military experts dreamed of the “pacification” of Kyiv according to the Aleppo scenario.

So far, direct threats come not from the mouths of Russian senior military officials, but from prominent Russian military experts.

A leading expert of the Center for Military-Political Studies of Moscow State Institute of International Relations (MGIMO), Doctor of Political Science Mikhail Aleksandrov (bio) has stated:

“We need to seize a moment when the ceasefire is massively violated by the Ukrainian side. As soon as they break the truce, a large-scale offensive by the Donbas troops should begin, supported by our air force and long-range systems: i.e. missile systems, cruise missiles, Iskander missiles and ait force. In fact, the Syrian option, when the primary military infrastructure of Ukraine will be destroyed … “. More details in the video (English subtitles available) :

Whether the dreams of the Russian military expert are just his personal position, or if they reflect the mood and plans of the military leadership of the Russian Federation as a whole, is not yet clear. But the scale and number of provocations and attacks on the Ukrainian front by the Russian terrorist forces have been growing. Under such circumstances, Ukraine can only rely on itself and stand fast against the onslaught of the enemy.

The bombing of Aleppo by the Russian air force and the deaths of civilians, women and children, have already provoked a wave of indignation among the world community. However, no sanctions or other measures have been imposed upon Russia in response to the destruction of Aleppo so far. Under such conditions, the despair of ordinary citizens is magnified and their disillusionment grows, spilling over into acts of terror.

On December 19, 2016, Russian Ambassador Andrei Karlov was killed during a photography exhibition in Ankara. The diplomat was shot point-blank by a Turkish policeman Mevlut Altyntas, who, after shooting the Ambassador, had shouted: “We die in Aleppo, you die here!  Do not forget Aleppo! Do not forget Syria! All those who participate in this tyranny will pay for it – one after another.”

We remind you that the threat of using the Russian air force against Ukraine has been real since the very beginning of the conflict in Donbas and the annexation of Crimea. After the Russian air force started bombing in Syria which has caused large numbers of civilian casualties, as well as due to the escalation of hostilities in the Donbas, InformNapalm international intelligence community announced to Russian military leadership that in response to the shelling of Donbas the volunteers would published personal data of Russian air force pilots in Syria on a weekly basis.
A year later, we have collected and published information about 116 officers – pilots and crew members of the Russian Air Force – who participated in the bombings.
Each pilot of the Russian Air Force should recognize that, if they carry out criminal orders against the people of Syria and Ukraine, the consequences could be not only sanctions and travel restrictions to Western countries, but also revenge by people driven to despair, like the Turkish policeman in Ankara. After all, a cynical statement of Russia’s Ambassador to the UN Vitaly Churkin that hundreds of photos of dead children after bombings in Syria were staged is certainly not a convincing justification.

About 5 million ethnic Ukrainians live in Russia, and not all of them will stay calm if Russians start bombing their home towns.

In the meantime, heavy fighting continues at Svitlodarsk. Over the last few days about 10 people have been killed (no exact data yet) and dozens have been wounded.  Russian terrorist forces are using heavy artillery and MLRS’s, and Russian experts dream of using the air force. Ukrainian soldiers bravely stand fast against the attack while Europe expresses 50 shades of concern.

No Responses to “The Svitlodarsk salient separates us from Aleppo: Russian experts dream of using air force and Iskander missiles against Ukraine (VIDEO)”