The numbers of Russian World defenders are growing smaller 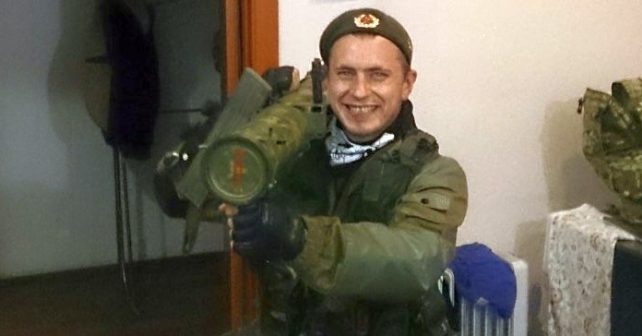 The numbers of Russian World defenders are growing smaller, while the list of Russian citizens with severed limbs and other permanent injuries is getting longer.

Dmitry Aleksandrovich Sukharev, born on July 30, 1987, served in the 6th Tank Brigade of the Russian Army (military unit 54096) from 2011 to 2015. He had fought in Donbas since 2014 until his right foot was destroyed in a firefight near Debaltseve on February 8, 2015. Most likely, he was medically discharged from the army. 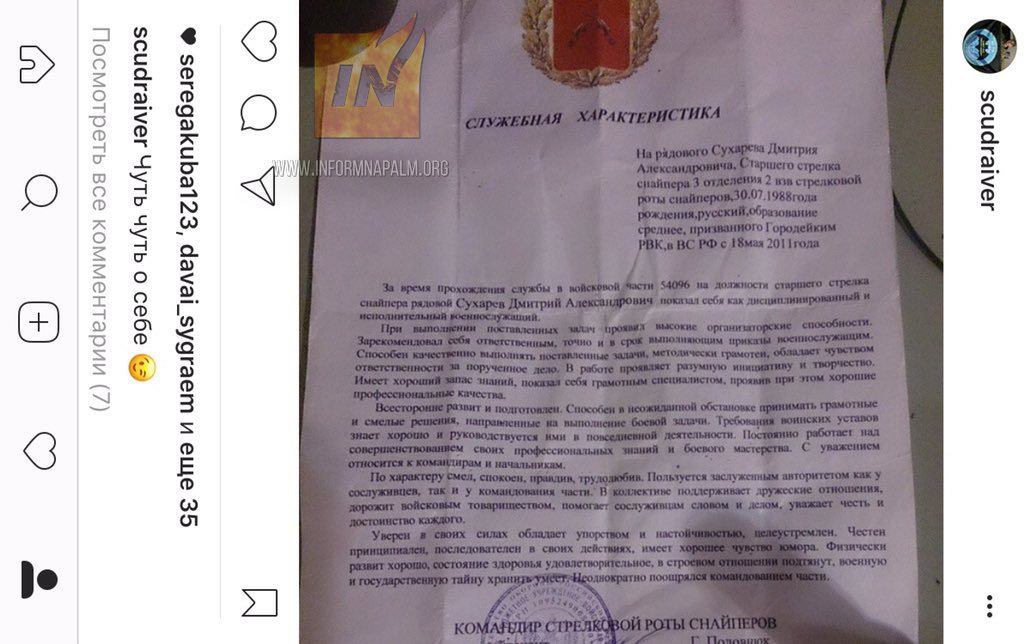 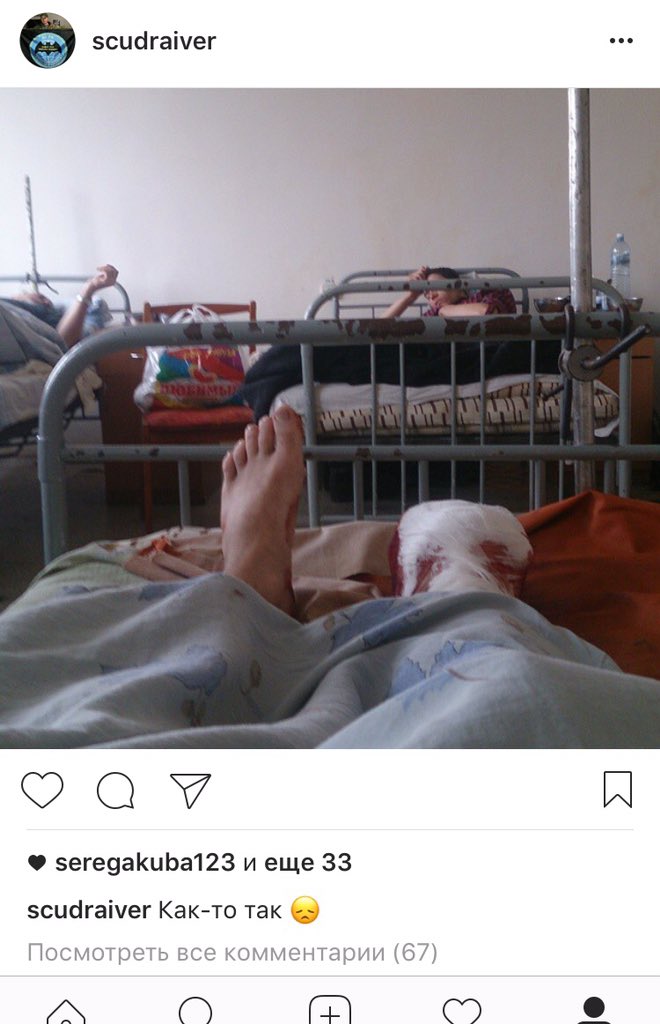 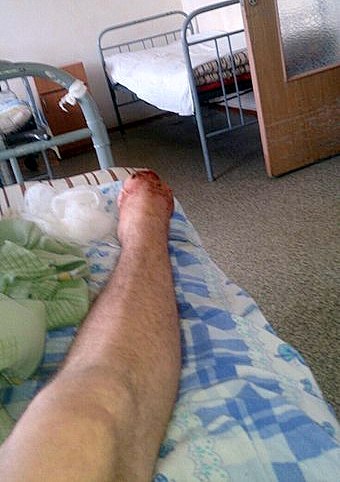 Dmitry Sukharev is the first person on the left in the photo below, with a blue shoulder patch. 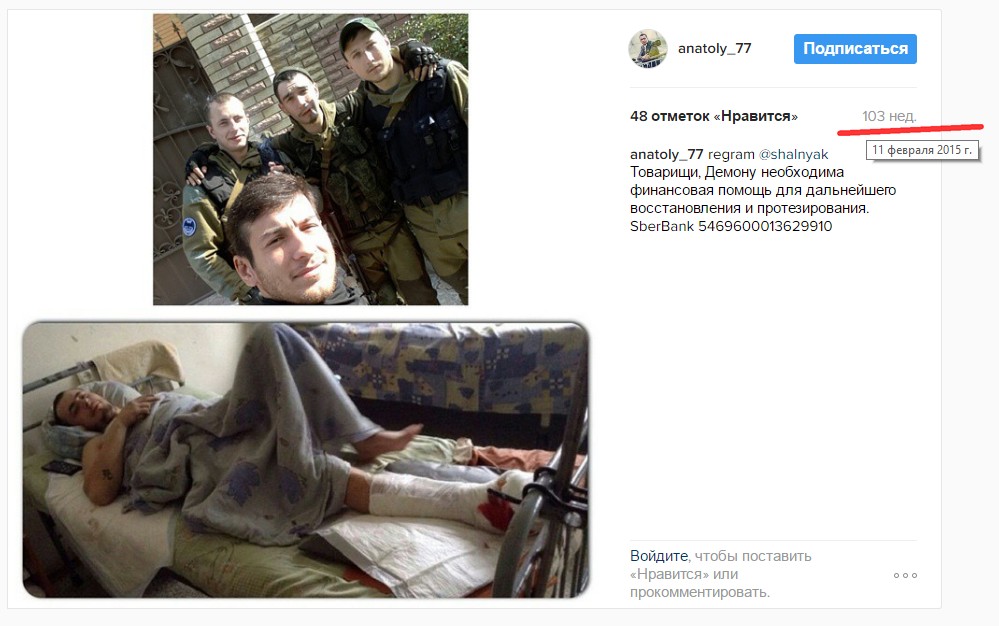 In the same photo you can also see Magomedkhabib Magomedovich Gadzhiyev (nearest the camera). He has been a contract serviceman in the military unit 3655 since 2008. It is evidenced by the patch worn by his comrade sitting next to him in an earlier picture. On VK social network, he calls himself “Shalnyak Merkucio”, and in Instagram –  «shalnyak». 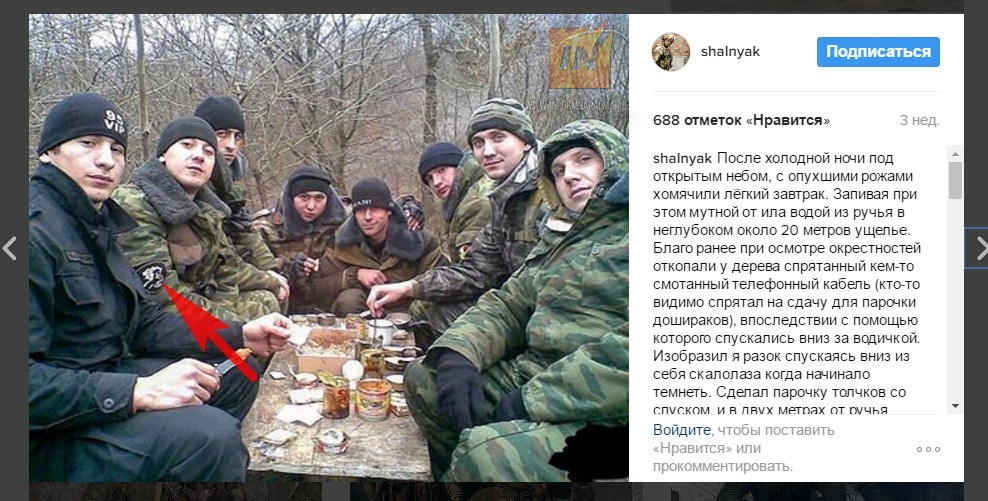 He took active part in the fighting in the Donbas. 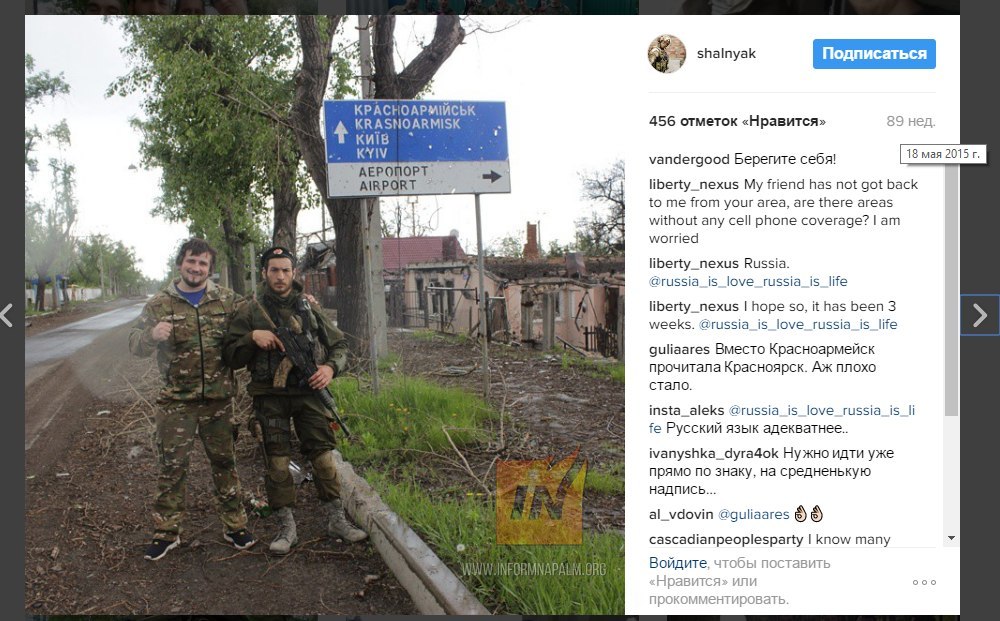 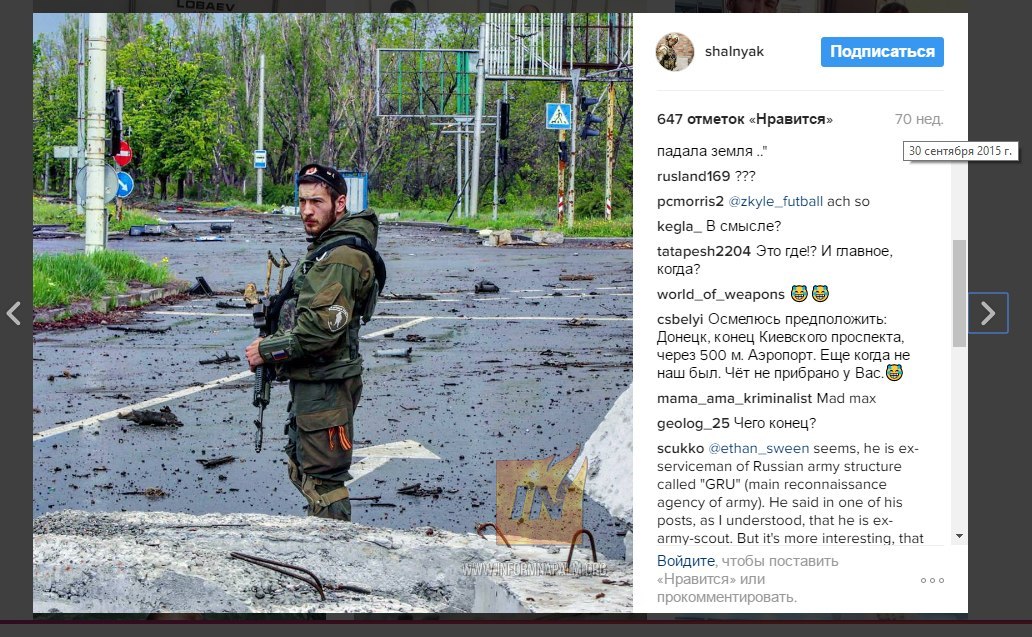 Magomedkhabib Gadzhiyev posted many interesting photos in the social network. Let us focus on some of them. 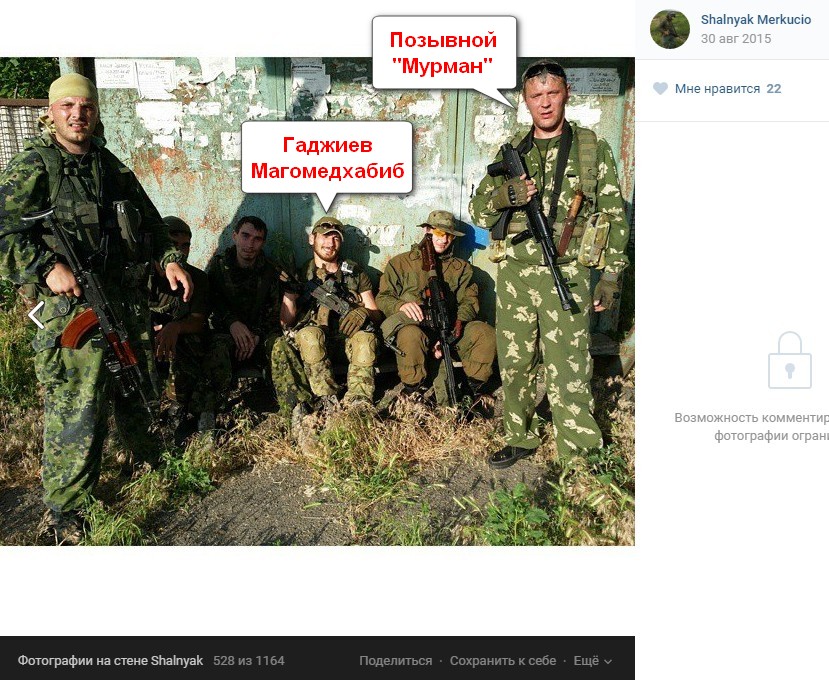 This photo has the comment “the picture was taken 2 years ago prior to moving out to the airport area. Murman is on the left…” Someone named Vladimir Zakharov commented later, “That’s definitely Vitaliy in on the left, memory eternal to him!”

On Vladimir Zakharov’s page in VK social network we found the picture with the comment “Collecting contributions for body transportation and funeral expenses. Vitaliy Zhdanov “Murman””. 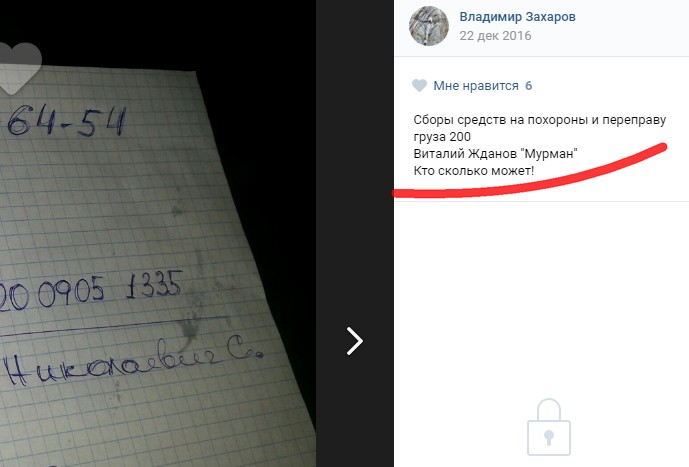 The “Murman” mentioned here is Vitaliy Sergeyevich Zhdanov – the Russian citizen who participated in the fighting in the Donbas since 2014. He was killed on December 16, 2016. His service in the Russian Armed Forces has not been confirmed yet. 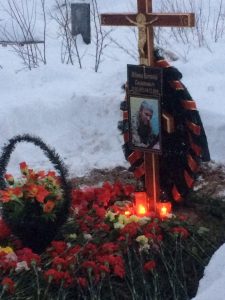 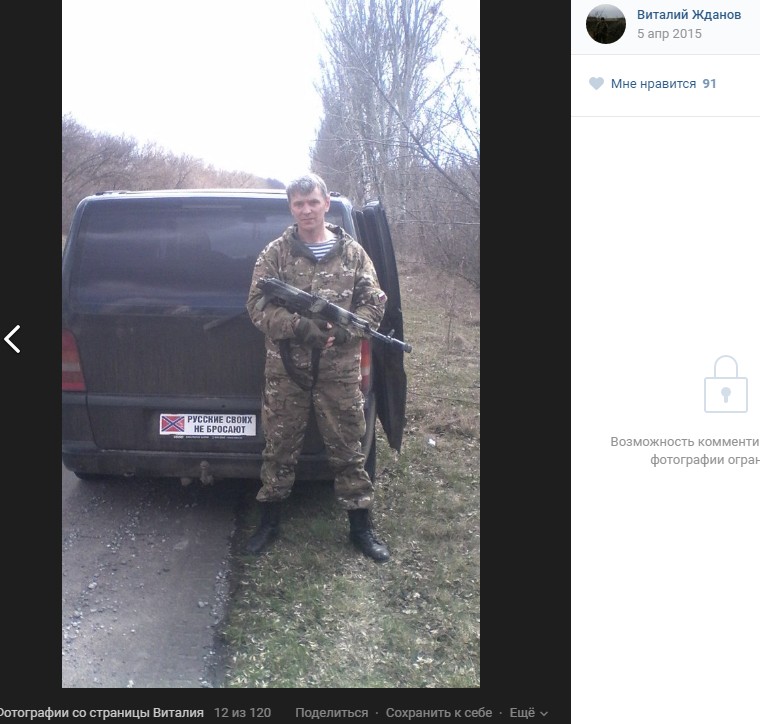 One of the first casualties, for whom Magomedkhabib Gadzhiyev collected money to transport the body for the burial in Russia, was his comrade-in-arms Yuriy Vladimirovich Sikhvardt, call sign “Dietrich”, born on October 7, 1985, a Russian citizen who lived in Omsk. He was killed in the Donbas on December 01, 2015.

We would like to note that Yuriy Sikhvardt was a hockey player from the Omsk team “Yastreby” (“Hawks”), who was identified by InformNapalm in early 2016 in the article “Hockey Coach from Tambov Fights in Donbas in the 5th Brigade of 1st Army Corps”. 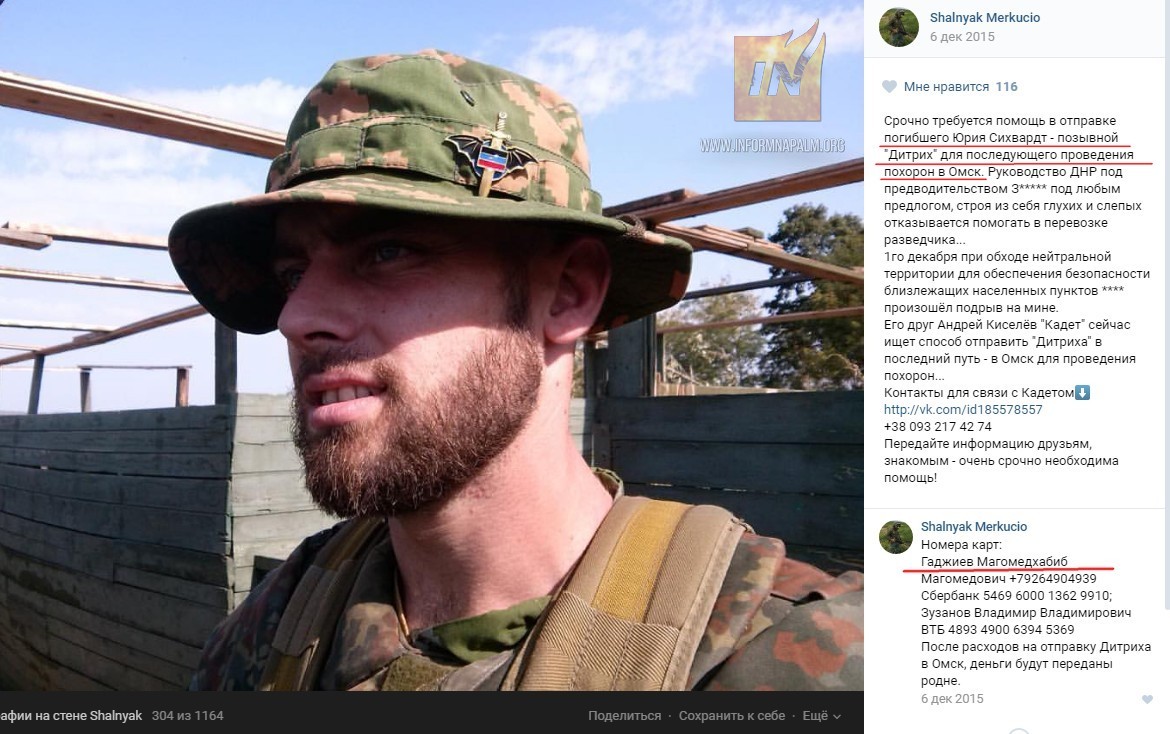 All people, named in this material, have several things in common: they are citizens of Russia, not of Ukraine, and they all served or still serve in the Russian Army, that is they have significant combat experience, and this is absolutely contrary to the image of the Donbas “militia miner” opposing the Ukrainian Army that Russian propaganda diligently creates.

We urge readers to actively share our publications on the social networks. Broad public awareness of these investigations is a major factor in the information and actual warfare.