Uprising behind iron curtain: Article on UPA from September 30, 1948(!) 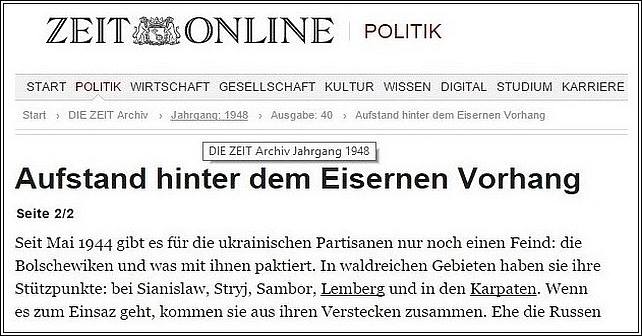 In Germany, several books, articles and much more have been digitized for some years, and many archives are now freely available on the Internet. Today we present an article from the archive of the German newspaper Die Zeit about the UPA

The struggle of the Ukrainian partisans (UPA)

Before the international refugee camp’s barrier, the Regensburg Ganghofer settlement ceases to receive train from German cities. Not even the onion turrets and the coarse-limestone walls with the small windows are able to enforce their Bavarian character compared to the whimsically altered street scene.

Thousands displaced Ukrainians from the ”people’s democracy” and its reign of terror have built houses with gardens and alleys, a true reflection of their eastern homeland. The protected and guarded area gives them an illusion to be anywhere along the rivers Don, Donets or Dnipro. Laughter is rarely heard in the streets or houses. Escape, poverty, misery, fear, persecution and deprivation have left signs in the Ukrainians’ faces. They stand back from strangers because their centuries long struggle for existence has caused distrust. What they wear is visible in the eyes and carries what the Lord demands of them. A small step on the road to independence. The country of origin regularly sends messages about the Ukrainian Resistance Army (UPA) from the battlefields to the American zone in Germany. Then, the refugees regain courage, and the West learns that freedom-loving people behind the iron curtain successfully fight their oppressors. 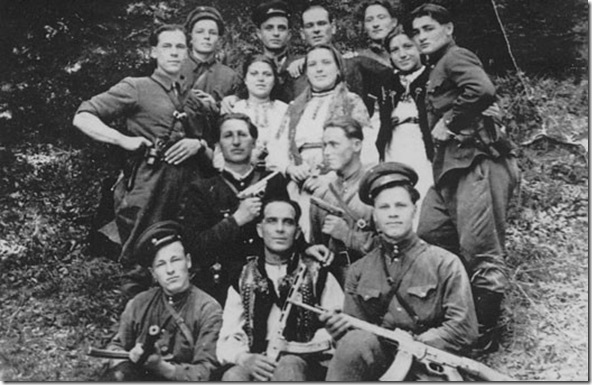 – Before we talk, look at the pictures, the normal-sized, muscular Ukrainian says, in whose modest rooms we sit.

He is 24 years, a commander of UPA, entrusted one of its campaigns in the West. His real name is registered in the home church’s christening records, but it does not matter long ago. His friends call him ”Berkut”, the mountain eagle. The pictures show partisans in the woods, with and without weapons, bending partisans at a church service in an open area, people beside a deceased person’s grave, in action behind bushes and shrubs. There are also some pictures with laughing young women.

– Believe nothing, says Berkut. They are such sentimental pictures. The girls fight like men, they are partisans like us. They carry weapons and have fought bravely.

A group photo shows uniforms and weapons, a colorful mix of Czech, Russian and Polish equipment. ”We have to conquer everything”, says Berkut. ” Who will give us something if we do not take it ourselves”. ”We must take the ammunition we use against the enemy, but despite this, our caps have a Tryzub (Trident), the free Ukrainians symbol. We are not a gang, but an ordinary uniformed army and we identify ourselves. The military organization covers the whole country, ranging from group units to regiments. Although we write as little as possible, our news service works well. When the help of the regiment is needed it is ready. We fight as partisans because of the balance of power. The enemy has heavy weapons and we do not. We do not use heavy weapons if we fight in the forest. Yet there are areas where the occupation force only dares to move in larger groups.

The enemies of the Ukrainian partisans

We mention to Berkut about suspected German SS soldiers and former Vlasov troops in the ranks of UPA. Berkut’s voice shows some irritation. In 1943 he fought against German civilian administration, SS, Gestapo and Polizei. UPA does not suddenly make enemies to friends. Vlasov is a former Soviet General who recruited his troops from prison camps in Germany. Neither Berkut nor his comrades had ever been soldiers of the Red Army. Since 1943, they have fought against all forms of oppression, first against the national socialists, then the Bolsheviks. But Germans who fled from Soviet captivity were their ranks, because they never had anything against Wehrmacht. This because its soldiers used to behave properly.

The Bolsheviks and some in association with them

Since May 1944, there is only one enemy of the Ukrainian partisans, Bolsheviks and some in alliance with them. In forested areas, they have their bases at Sianislav, Stryj, Sambor, L’viv and the Carpathians. When they are active, they come out from their hiding places. Before the Soviets can return fire, they are gone again. UPA is not only linked to its bases, the organization covers the entire country. What is happening on Crimea today, everyone in the forests will be knowing tomorrow. The partisans do not have sukkahs and holes in the ground, but deep bunkers built through great work. Four to ten meters below ground are necessities, hospitals and defense casemates. NKVD’s special forces in the Soviet Union have made great efforts to drive UPA from their hiding places. They have not succeeded, despite 40,000 to 60,000 well-equipped Soviet soldiers scanning the forest. Their losses have always been higher than they had expected.

– But it is not in the end a hopeless struggle carried out by the Ukrainian rebel army?

– If we fail, our children must do it, and the goal is the same, a sovereign Ukraine, says Berkut. The fight is not hopeless.

No society according to Soviet patterns 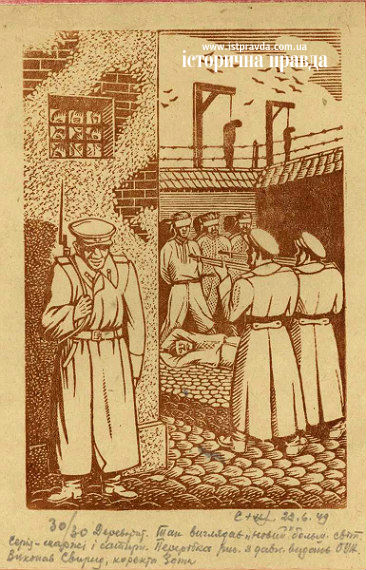 The Ukrainian people want to enjoy free agriculture, not in social communities, according to the Soviet pattern. So, kolkhozes go up in flames with all the equipment and machines. The Soviets gather people because they need to have work slaves. Therefore, transports are attacked, and people freed. Many German prisoners have been saved thanks to such attacks. NKVD sets up bases in the cities to create headquarters to fight the partisans. So, these bases fly in the air.

– And in what better way should allies work together to create deterrent?

– We want the West to be aware of our struggle. They should know that even the most powerful Soviet military machine is not unassailable.

In September 1947, Berkut was ordered to march west, with his group and weapons, as partisans and witnesses of resistance. Others came before him, others after. Their experiences are just like each other. Two and a half months they were on their way, they struggled bitterly. Now they have reached their destination. ”We have no problem filling our equipment”, says Berkut. ”The Russians deliver their weapons to the Poles and Czechs, and neither of us surrender to the enemy alive. These are our rules and laws”. ”The world has learned about us, we can find allies in our struggle. We are ready and waiting for new orders, maybe we’ll be back soon”.

– If you will not prevent someone if you dare to raid in the opposite direction?

It really looks like nobody can stop them. When Poland repatriated all Ukrainians from the southwestern corner of Polish East Prussia, an UPA unit was ordered to protect its compatriots. For a long time, it was quiet around the group, which marched north through the woods at night. The first reports of clashes with ”people’s enemies” were recently reported in Lithuanian newspapers. That was how UPA fought at the time when the ”envoy” Berkut came to the west with his people.

No Responses to “Uprising behind iron curtain: Article on UPA from September 30, 1948(!)”