Wagonloads of unwanted cash: the cost of a new railroad bypassing Ukraine 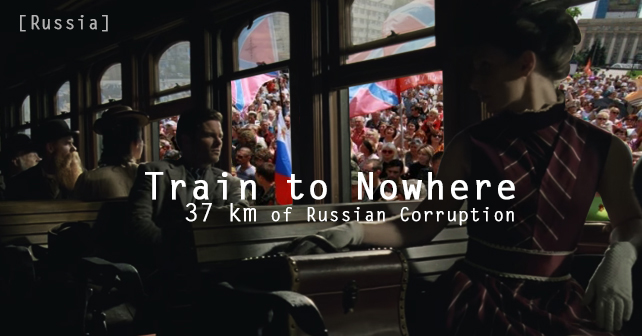 InformNapalm decided to find out, when the first trains would start on a new railroad bypassing Ukraine, which resources had been allocated for the project, and whether the targets are feasible at all.

The Russian government has recently been paying heightened attention to the railroads, which are more than means of communication and transportation in Russia. The number of training exercises among railway troops has also increased. One of the latest were the exercises in the Southern Military District of Russia, involving Amur and Baikal armored trains. They were practicing security of railroad bridges against subversive and reconnaissance groups of the opposing force. Not surprisingly, the representatives of the Ministry of Defense spoke about the stages of construction of the railroad bypassing Ukraine.

It is worth mentioning that the construction started on April 25, 2015. That decision was based on the desire to bypass the 37-km rail link passing through the territory of Luhansk Oblast on the Moscow-Adler train route. Russian patriots said that the project of the new railroad had nothing to do with disowning Novorossia. They were convincing themselves and others that should such a railroad pass through the territory controlled by so-called “militia”, the construction would not start.

By that time, in December 2014, the movement of Russian trains through the territory of Ukraine was terminated due to profitability issues. The schedule of the Federal Passenger Company included only one train on the Moscow-Chisinau route passing through Ukraine, and also through Transnistria, the occupied territory of Moldova.

The cost of the railroad project to bypass Ukraine is estimated at about 55 bn rubles. In April 2016 there were reports of the construction progressing at a record pace and ahead of schedule.

So, according to public auction data, as of December 2016 it was supposed to allocate about 39.2 bn rubles for the railroad construction. Although it was reported earlier that 6.5 bn rubles were supposed to be spent in 2015, and 18 bn rubles in 2016. The construction costs broken down by railroad stations can be represented as follows: 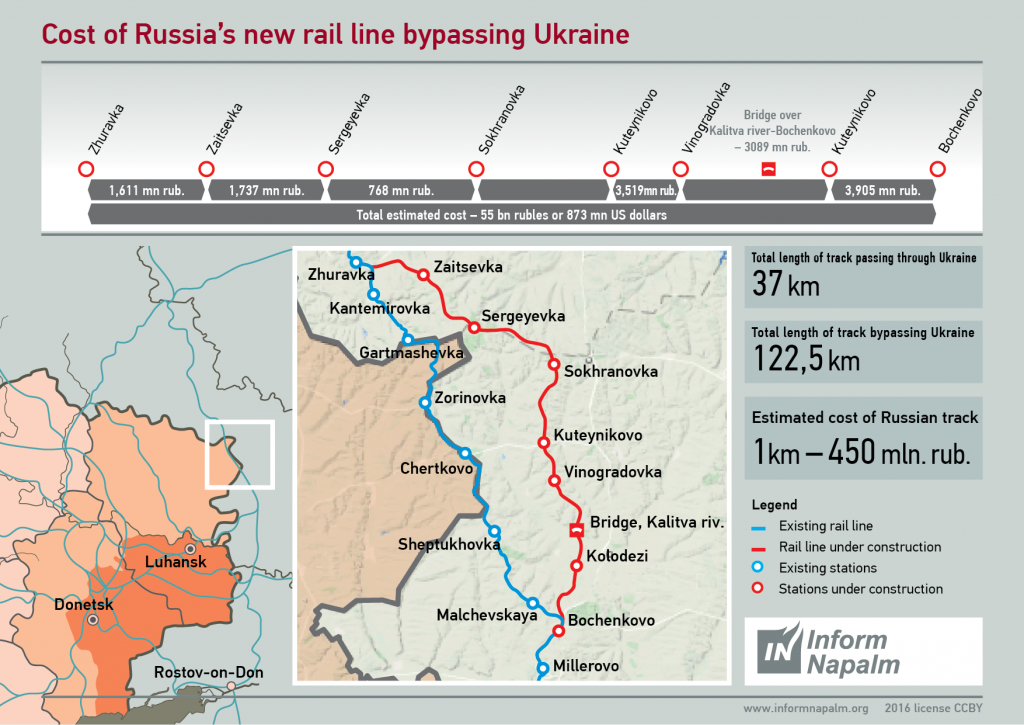 However, contractors at some road sections are not eager to set to work. Thus, some tenders were deferred several times. Although according to the initial plan, the works should have been finished before the end of 2016. First of all, the postponing of tenders was caused by tight deadlines and by the wish of Russian Railways managers to finish work until June 30, 2017. The second reason was the declared maximum prices of contracts.  So, we detected the following troubled sections:

Thus, since mid-2016, contracts for more than 10 bn rubles have not been concluded. Untimely performance of work will slow down commissioning of the facility. The speed of work in winter is also affected by the weather. But Russian military conscripts of railway troops, as free manpower resources of the Russian Ministry of Defense, have to brave rain and cold. Moreover, some construction accidents did happen. On May 11, 2016, two conscript soldiers were showered with sand from a dump truck. One of them died on the spot, the other was taken to the Voronezh central hospital with pelvic bone fractures. 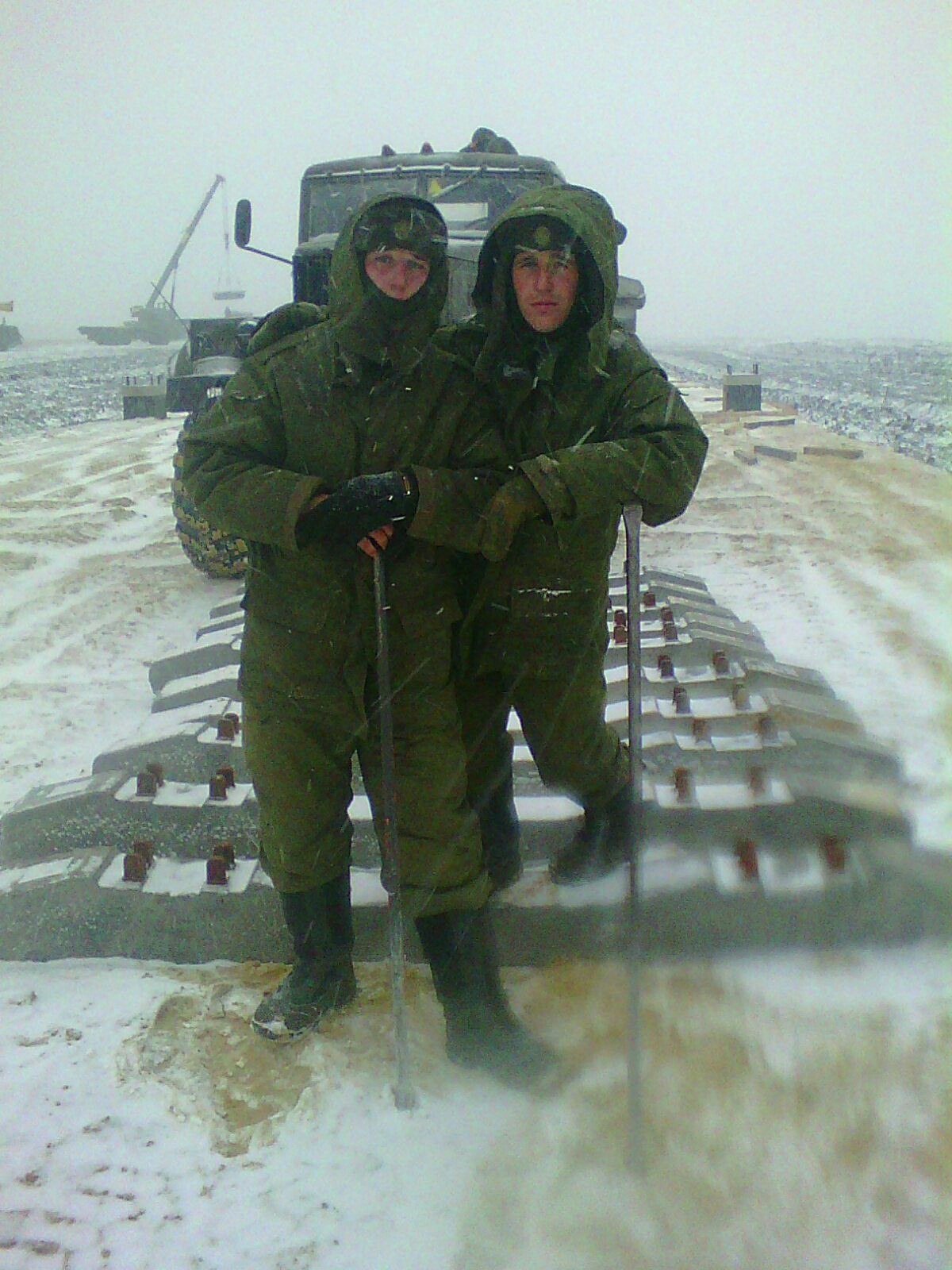 For the New Year holidays, from December 25, the conscripts of railway troops are to be sent home. The equipment will be mothballed, and the critical infrastructure of the railway military base will be secured. In mid-January 2017 the military will proceed with the work. According to the plan of the Defense Ministry, after commissioning of the road, the railroad workers will be transferred south to perform grading work on the Crimea bridge project.

Despite the target set by the President of Russia, the Defense Ministry has rushed to state that the trains would move on the new section bypassing Ukraine in August 2017. Given the reluctance of construction companies to participate in construction of the facility, snubbing government tenders, even this new date is not guaranteed. It is worth stressing that Russia took all this effort including loss of human life and multibillion financial expenditures to bypass a 37-km-long section of rail track passing through Ukrainian territory in Luhansk Oblast. To date, the budget cost of 1 km of Russian rail track amounts to about 450 mn rubles.

This publication was prepared on the basis of an OSINT-investigation by InformNapalm volunteer intelligence community. Author Victory Krm, translated by Victoria Batarchuk, edited by Artem Velichko

2 Responses to “Wagonloads of unwanted cash: the cost of a new railroad bypassing Ukraine”