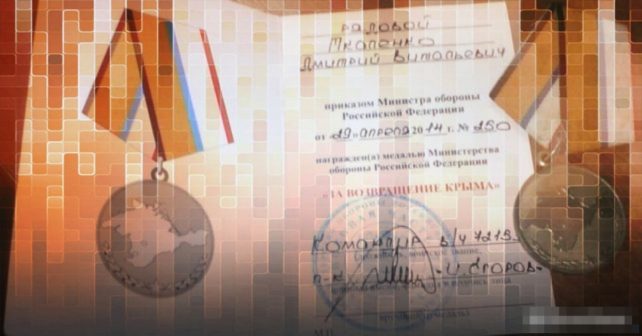 In early March, Russian President Vladimir Putin signed amendments to the law On the Status of Military Personnel adopted by the State Duma. From now on, Russian soldiers are prohibited from reporting to the media and publishing information on the Internet about themselves and other servicemen of the Russian Armed Forces, including those who have been discharge into reserve, about their family members, and on the activities of military command. It is also prohibited to use while in service electronic devices that allow you to store and distribute on the Internet audio, photo, video, as well as geolocation data.

Over the past five years, this is not the first attempt of the Russians to stop the leak of information into the world network about war crimes committed by Russia in different countries. However, these attempts have not been successful: information of a military nature has been published not only by the Russian servicemen themselves, but also by their relatives, so the circle of people who in Russia should be banned from using smartphones is very wide. In short, the State Duma has more work to do.

Today, InformNapalm volunteers unveil information about a serviceman from the 76th Maintenance Battalion (military unit 23286, home base in Slavyansk-na-Kubani, part of the 99th Logistics Brigade, military unit 72153, based in Maykop) who participated in the seizure of Crimea. And his wife helped us in our investigation.

Burned by his wife 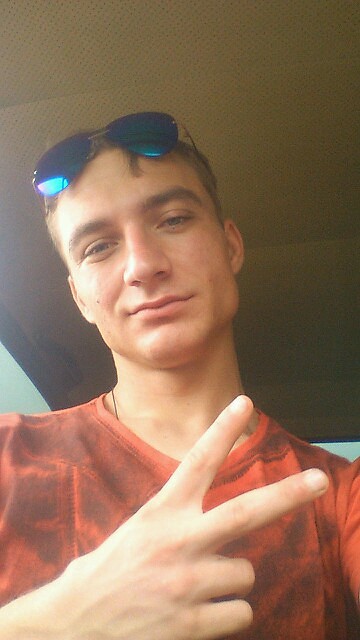 His first army photos appeared in the album on Odnoklassniki Russian social network in July 2013. And in the spring of 2014, in Tkalenko’s album appeared pictures taken in Crimea. 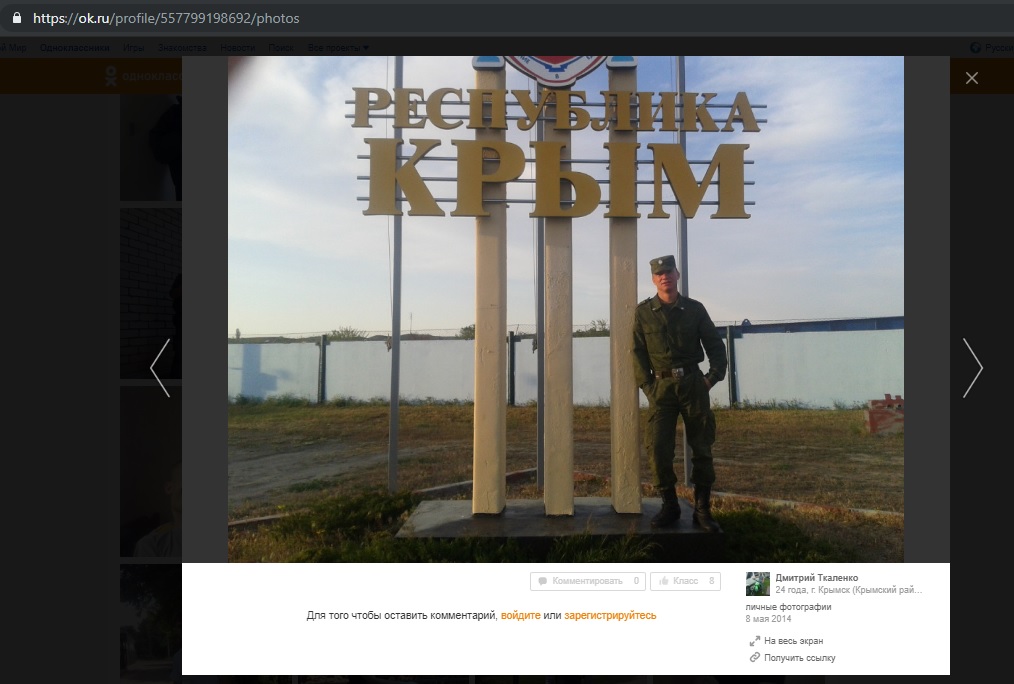 In February 2017, Dmitry’s wife Olesya Tkalenko (Khorosheva) published photos of the medal “For the Return of Crimea” with its award certificate in her VKontakte account. Later, Olesya deleted these photos from her album, but we saved them for the International Criminal Court. 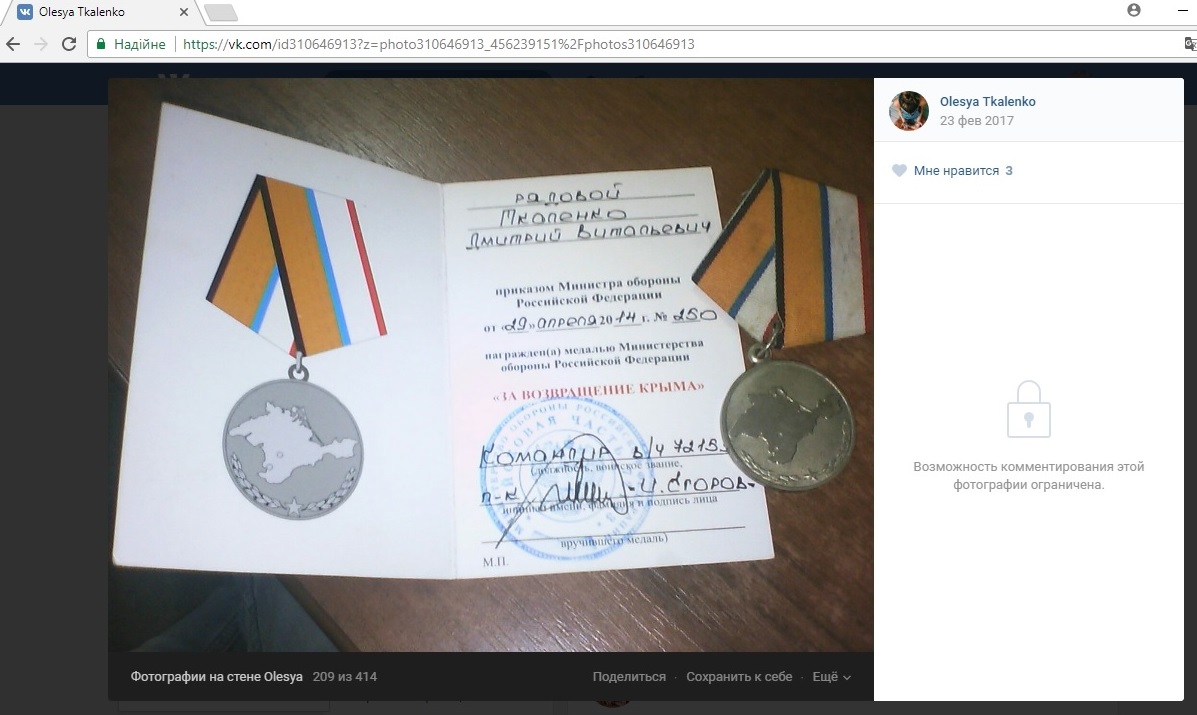 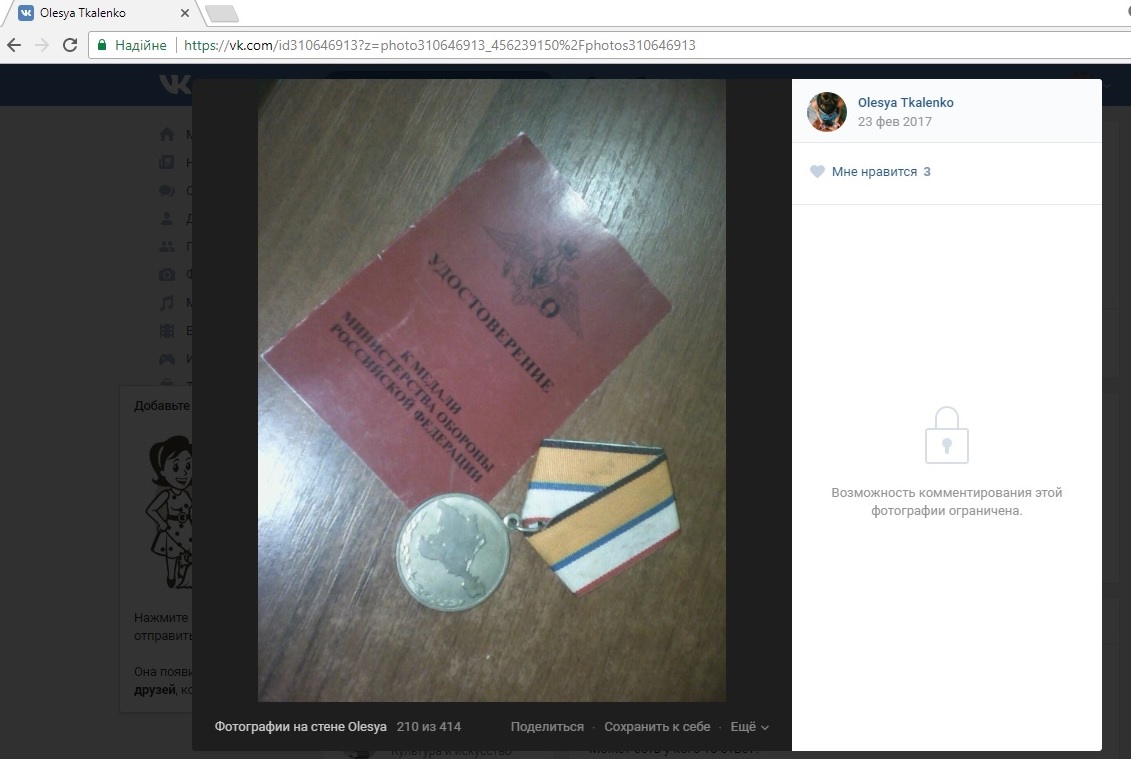 The award certificate indicates the number of the military unit where Private Dmitry Tkalenko served (judging by the patches on the uniform as a signalman): military unit #72153. This is the 99th Logistics Brigade. The certificate to the medal was signed by Colonel Igor Anatolyevich Yegorov who in 2014 commanded the 99th Logistics Brigade. We mentioned him in an article about soldiers from the automobile battalion of this brigade. 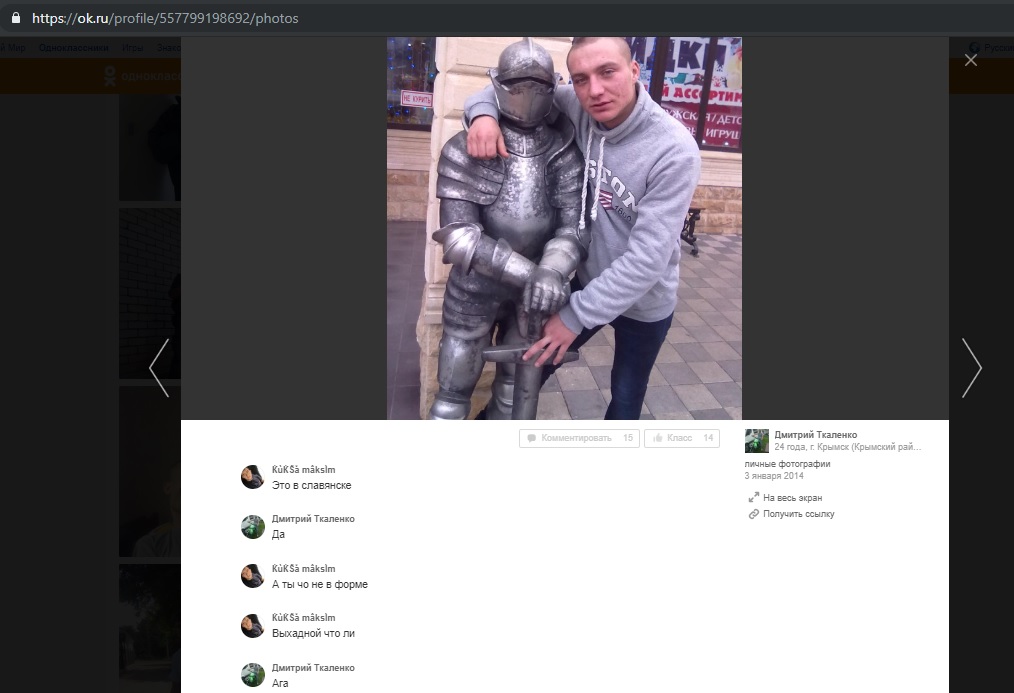 In the comments to the photo below, Dmitry Tkalenko says that he is in Slavyansk:

Apparently, he is in Slavyansk-na-Kubani, where the 76th Maintenance Battalion is based. This is confirmed by the information in Tkalenko’s friends’ accounts.

Tkalenko was identified in a group picture on his friend Yuri Shangin’s page: 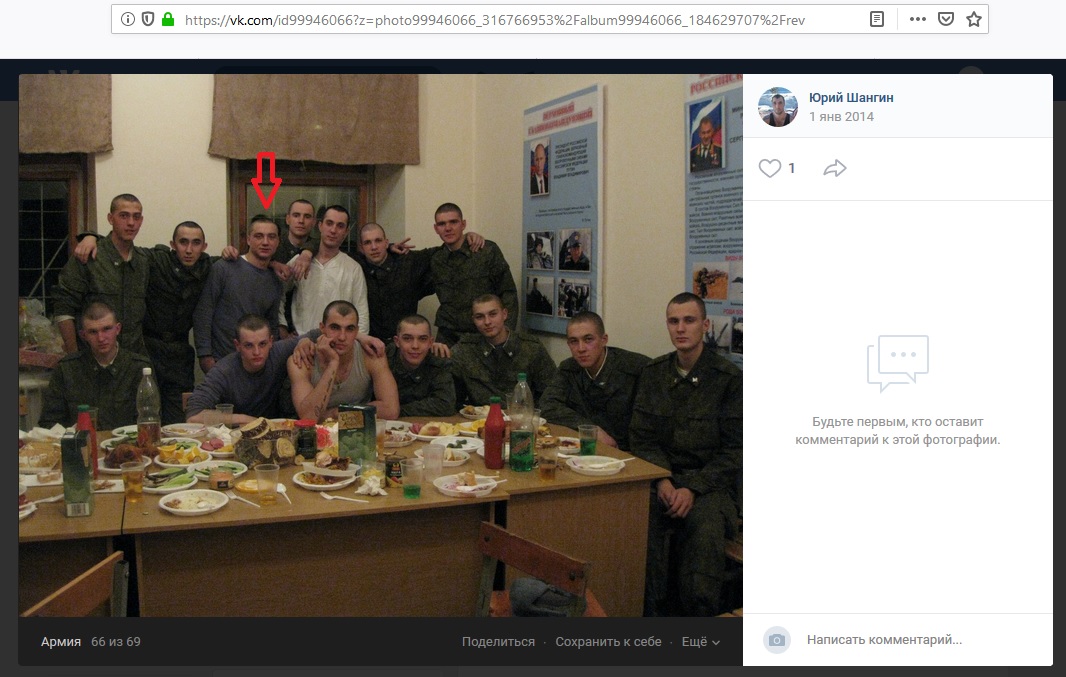 Shangin also posted a photo of soldiers that was taken at the military base. On the wall we see a poster with the inscription “Slavyansk-na-Kubani”: 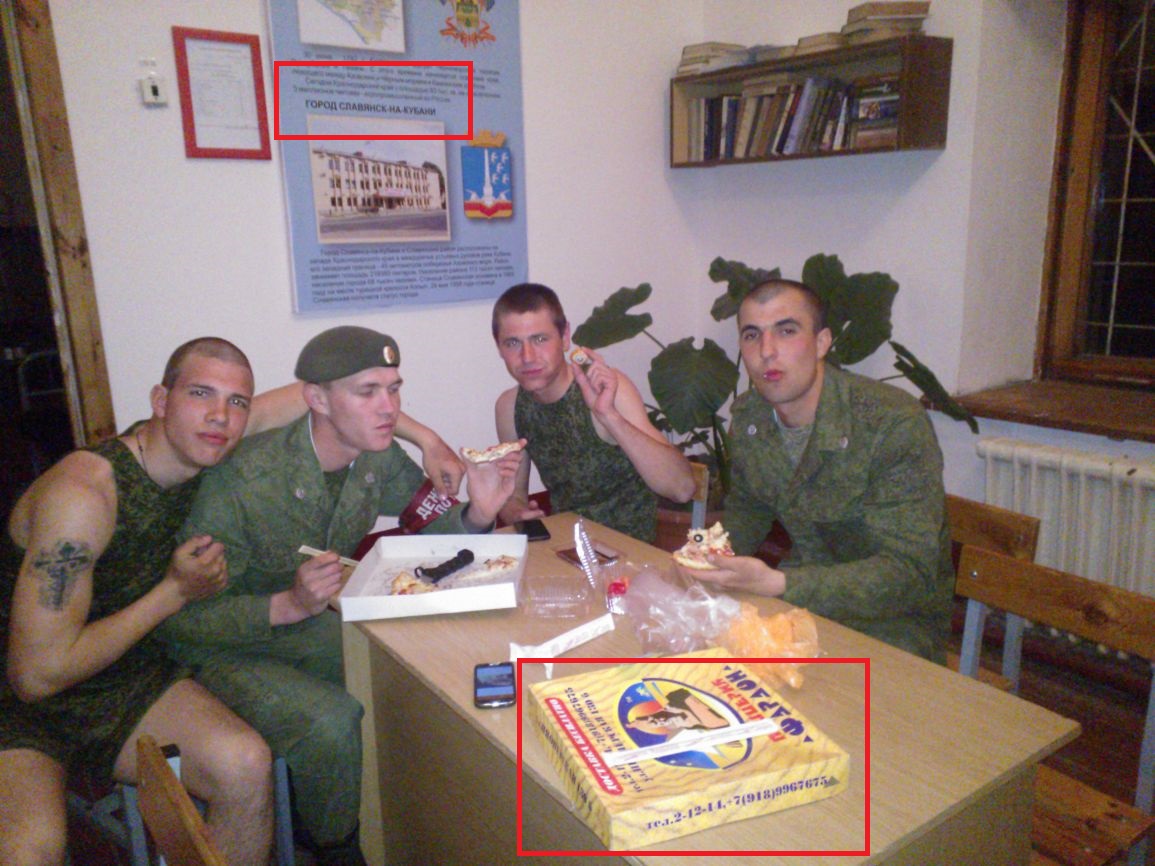 There is a pizza box on the table with the name of the pizzeria and a phone number. This is a phone of Pharaon Pizzeria in Slavyansk-na-Kubani: 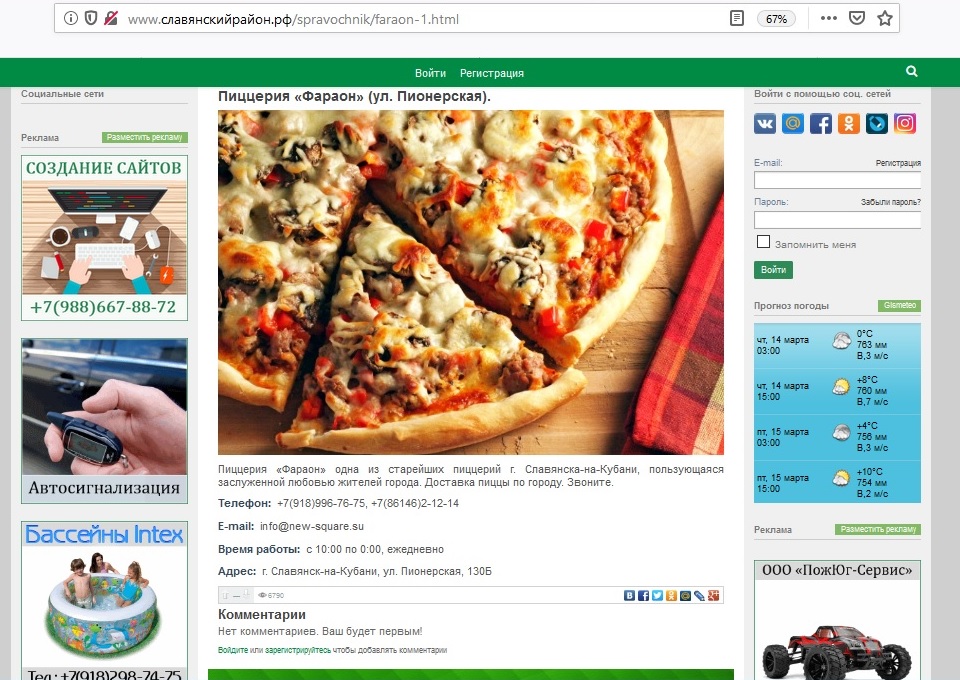 Another important photograph was found in the album of Dmitry Tkalenko showing him and his father, both in military uniform and with weapons. The caption: “I am with my father in Crimea))”. 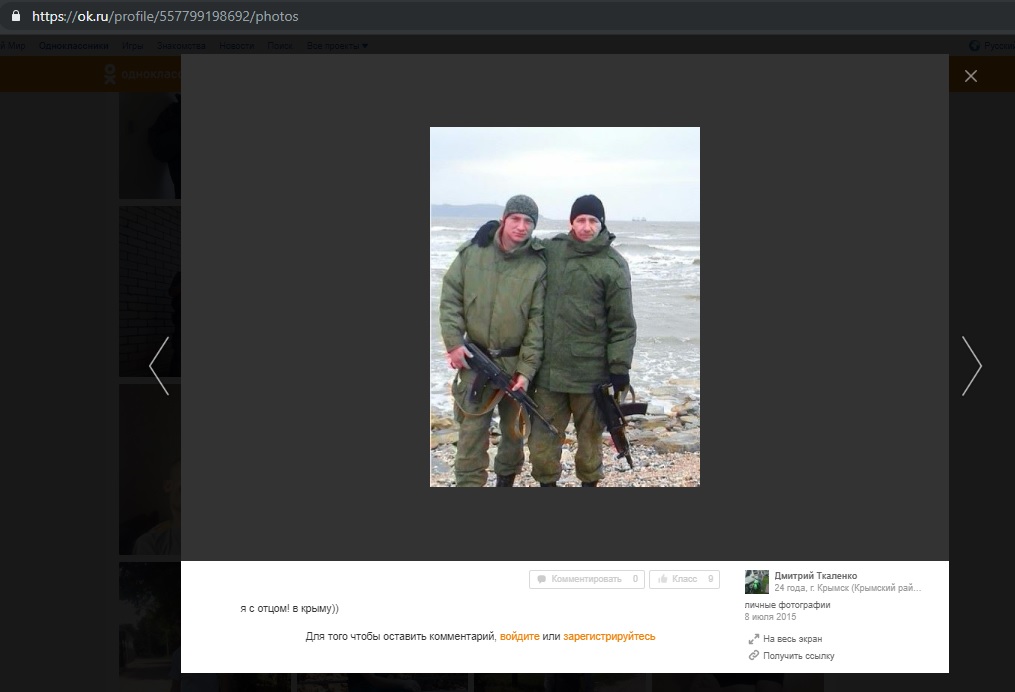 Vitaly Tkalenko, Dmitry’s father, also participated in the annexation of Crimea serving in the 18th Motorized Rifle Brigade. He was mentioned in our investigation List-1097: How the Russian 18th Brigade occupied Crimea.

When using the information an active link to the source is required.
(Creative Commons – Attribution 4.0 International – CC BY 4.0 )
Press repost and share with friends
Subscribe to the InformNapalm community pages on