Money Gone With the Wind. Largest Electrical Windfarms in Ukraine Under the Control of the Terrorists 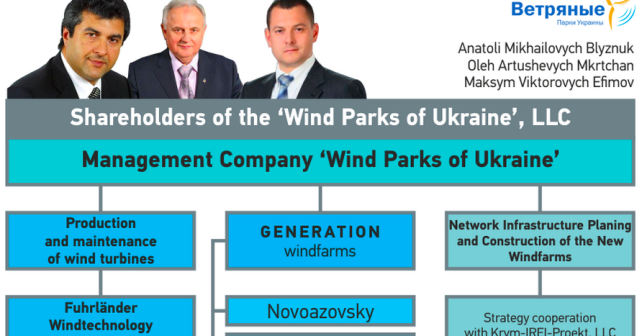 InformNapalm international volunteer group gathered evidence of presence of the Russian militants within the territory of the ‘Novoazovskyi’ windfarm and monitored the activities of the Ukrainian electrical windfarms in the occupied territories of Ukraine.

In 2008 Ukrainian authorities launched a green tariff, according to which companies generating power from renewable sources (solar, wind, water and waste fuels based energy) earn many times more comparing to thermal or nuclear power stations. Subsidies of the ‘green’ power generation are practiced all over the world. It is a strategic investment and the protection of the environment for the developed countries. But in Ukraine the green tariff became an enrichment scheme for Andriy Klyuyev, former Verkhovna Rada deputy and head of the Presidential Administration of Ukraine at the times of Victor Yanukhovych. Klyuyev owns Active Solar doing installations of solar panels. But when Active Solar lost its leadership after the annexation of the Crimea, the windfarm operators took the lead role.

Management Company ‘Wind Parks of Ukraine’, LLC is one of the biggest holdings in the wind power generating sector of Ukraine. It includes ‘Fuhrländer Windtechnology’ — an enterprise, specializing in the production of modern wind turbines, incorporated in Kramatorsk in July, 2010 and a group of windfarms, producing the power or being at the stage of construction/planning. 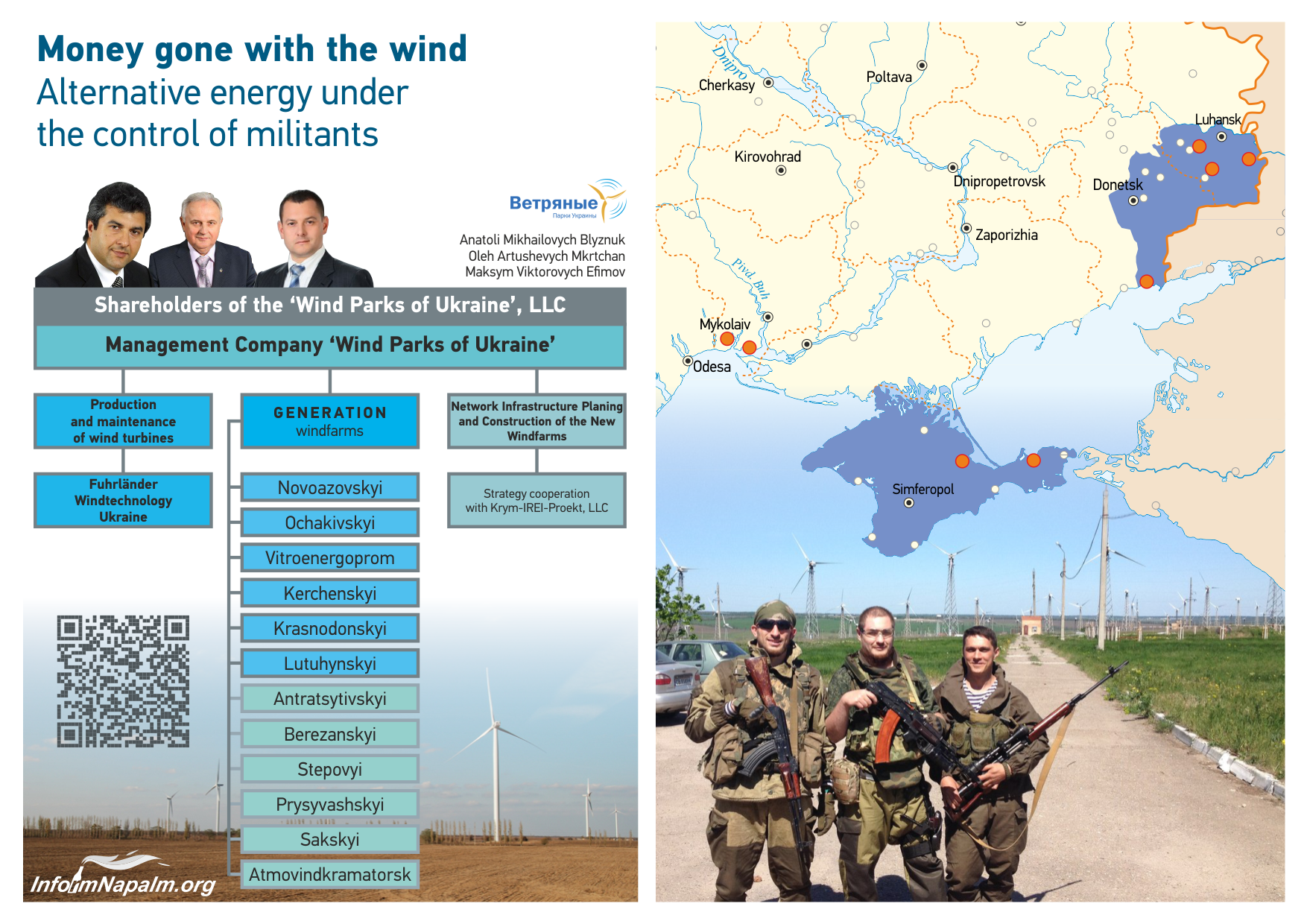 Most of the windfarms, namely: Novoazovskyi, Krasnodonsky, Lutuhynskyi are located in the occupied territories of Donetsk and Luhansk Oblasts. In 2014 these companies changed the registration address: 01021, Kyiv, Klovskyi descent, 7.

It is not quite clear about Kerchenskyi windfarm, since it is registered in the Autonomous Republic of Crimea, Leninsky raion, Novomykolaivka, Oktyabrska str., 18A. But the Russian state register of corporations says that this windfarm is located in the occupied Crimea and was registered as the Russian legal entity on November 28, 2014. Balla G.E. is the director of the enterprise according to both: Russian and Ukrainian registers of corporations.

An article in the Russian Rossiyskaya Gazeta notes that the Crimean windfarms seceded from the Ukrainian mother company. ‘We have registered four legal entities in Crimea,’ — says Gennady Balla, the director of the Crimean windfarms. ‘Kerchenskiy windfarm is already operating. As for the Prysyvashskyi — we have already received the technical specifications from Krymenergo for interconnection with their supply substation. Sakskyi and Stepovyi windfarms are waiting for their turn.’

Thus, the construction of windfarms is funded with the money of the shareholders of the Industrial Union of Donbas, family of the former Donetsk Oblast governor Anatoly Blyzniuk and Maksym Efimov, an MP from Solidarnist, Petro Poroshenko Bloc in the Ukrainian Parliament.

Nashi Hroshi [Our Money] website investigating corruption reports that the State Enterprise Enerhorynok, responsible for operating the electricity market in Ukraine, signed a contract on supply of electricity with Novoazovskyi windfarm back in 2011.

At the same time the National Commission for State Regulation of Energy and Public Utilities issued a number of orders in March 2015 by which the decision was made not to transfer payments to producers of electrical energy, whose equipment was located within the occupied territory of Ukraine. Novoazovskyi windfarm was also in the list. But in April 2015 this windfarm and Vetroenergoprom company managed to get a court decision to exclude them from the list. The court took into account the fact the company’s facilities are located in the territory of the Rozivska village council in Donetsk Oblast.

By the government’s ordinance of November 2015, only Krasnoarmiyske and Novoazovsk in Novoazovsk raion and Primorske in Starobesheve raion were marked as settlements uncontrolled by Ukraine. No evidence of companies’ capacities being in the uncontrolled territory were provided to the court.  Thus, the court decided on July 22, 2015, that State Enterprise Energorynok must compensate 52.73 million hryvnias in favor of Novoazovskiy windfarm.

We will not delve into the intricacies of this legal process, but we should mention that the representatives of the Russian occupation forces pay attention to this wind park despite the fact that the production of electricity is located in the disputed territory. 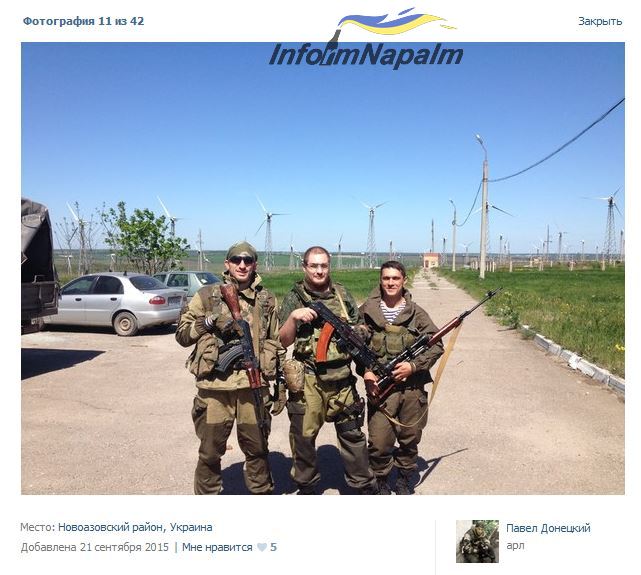 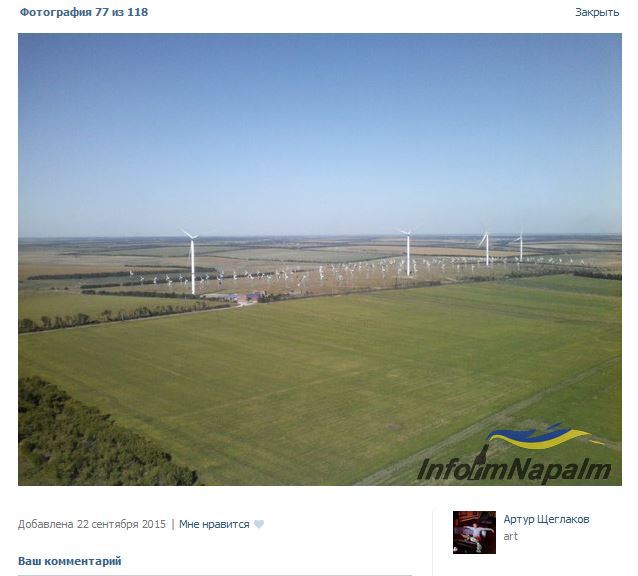 Earlier there were only group selfies in front of wind turbines. Now we found the evidence that the military criminals started to play the masters in the territory of Novoazovskyi windfarm. The militants climb the turbines and use them as observation points. All this was documented in the video by Artur Shcheglyakov, a militant from Luhansk (VK profile, archive 1, archive 2).

Let’s take a closer look at the video location on the map. The video was shot from FL-2500 wind turbine produced by ‘Fuhrländer Windtechnology’. You can see the sea in the distance, the town of Sahanka can be found on the left, the USW 56-100 wind turbines are on the right. 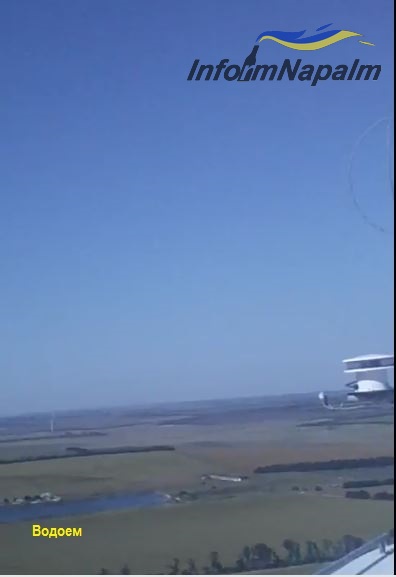 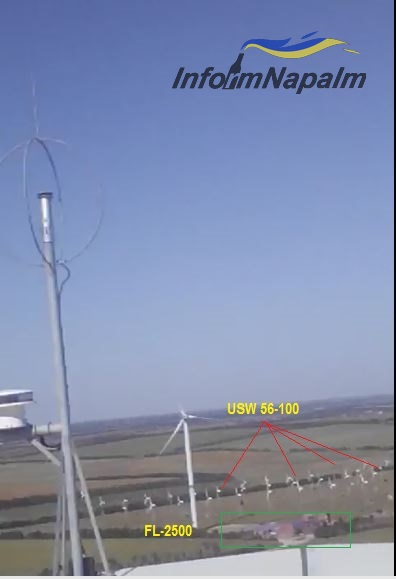 This geolocation leaves no doubt that the video was taken in the territory of Novoazovskyi wind park.

What do militants do in the windfarm territory? Do they observe positions or use the wind turbines as a shield for their camp? There is another video of a field camp in this profile, but the position of it remains unknown.

The aerial reconnaissance conducted by ‘Dnepr-1’ battalion disclosed a build up of the military equipment in the Bezimenne village. The photos demonstrate defensive works at the wind turbine basement from which Artur Shcheglyakov made his video. 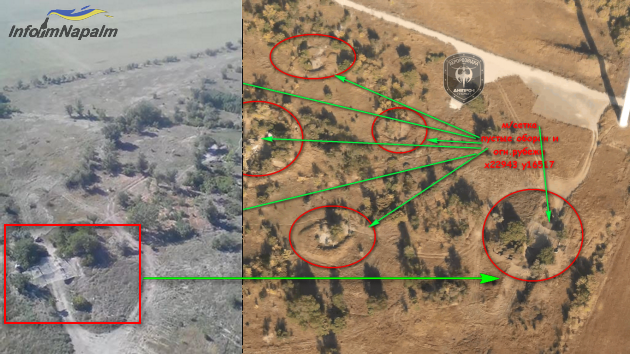 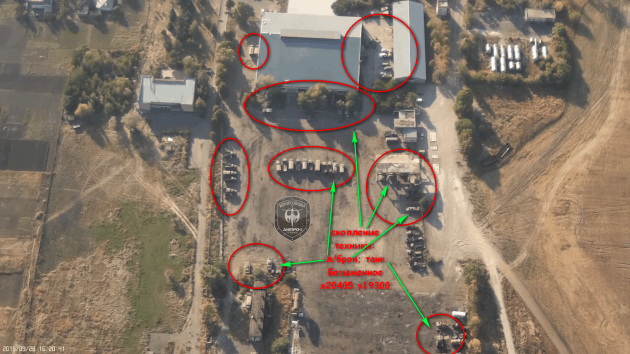 This way, no matter if the residential area is in the list of the uncontrolled ones, the production of the electric power is done under the control of the Russian occupation forces. How much does such kind of ‘protection’ cost? 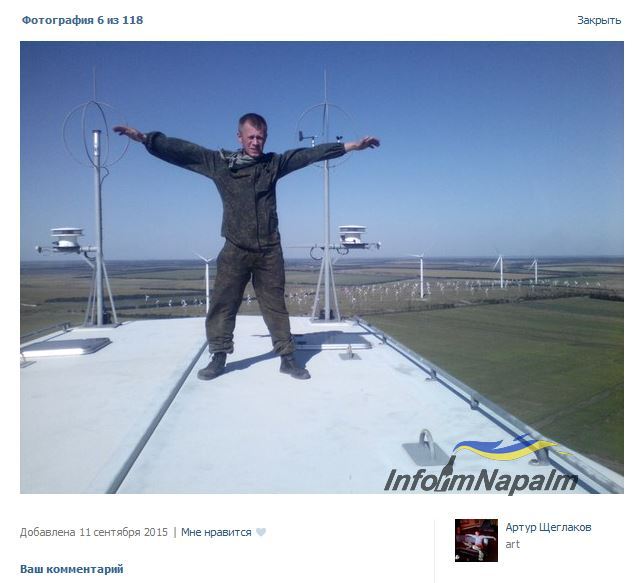 We are going to continue monitoring the windfarms’ functioning not only in the area of Novoazovsk, but also in Lutuhyne, Krasnodon and Antratsyt raions.

No Responses to “Money Gone With the Wind. Largest Electrical Windfarms in Ukraine Under the Control of the Terrorists”