Appeal of Chairman of Mejlis of Crimean Tatar People to Leaders of Ukraine, Germany and France 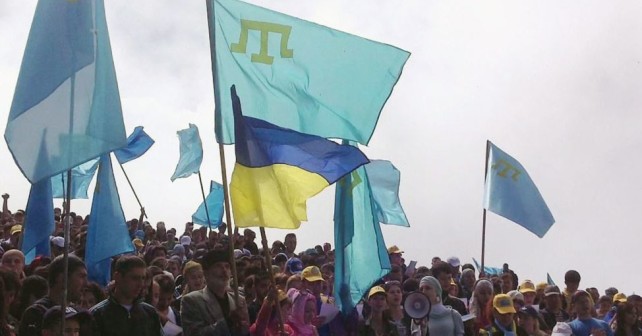 That day, when you meet in Berlin, it will be 542 day (On February 27, 2014), as world had witnessed the fact of starting the special russian military action against Ukraine. As a result of it, Crimea was occupied and the bloody battle on the territory of the Lugansk and Donetsk regions is continuing to these days.

542 days the Ukrainian society is living in a state of Russia’s war against Ukraine, during which thousands of people (civilian and military) were killed, tens of thousands were injured and maimed, and more than 1 million 500 thousand people were forced to leave their homes.

On the territory of the Crimea peninsula, now occupied by the Russian Federation, there is a direct threat to the existence of the Crimean Tatars, the indigenous population of Crimea, who organized mass rallies and protests against the invasion of the Russian troops on February-March,2014. Crimean Tatars until now support UN General Assembly Resolution (A / RES / 68/262) on the territorial integrity of Ukraine, adopted on March 27, 2014.

At the same time, numerous statements made by international organizations, including the UN, EU, Council of Europe and the OSCE, as well as the leaders of the different countries with an expression of concern and their calls on to respect the rights of the Crimean Tatar people and other residents of Crimea, still remain without attention of the Russian Federation, which annexed the Crimean Peninsula.

The situation of the Crimean Tatars, which is tragic already, is deteriorating day by day. Violence against the members of the Mejlis of the Crimean Tatar People is continuing. At this time, the acknowledged leader of the Crimean Tatars, Mr. Mustafa Dzhemilev, Chairman of Mejlis Mr. Refat Chubarov, civil movements Sinaver Kadyrov and Ismet Yuksel have been banned from entering and residing in Crimea. Also, Deputy Chairman of the Mejlis Ahtem Chiygoz, as well as activists Ali Asanov and Mustafa Degermendzhy have been illegally detained for months in the dungeons of the FSB and subjected to moral and physical terror.

Dozens of young Crimean Tatars were forcibly abducted, some of them were later found dead, the fate of the others is unknown. Hundreds of activists of the Crimean Tatar national movement are being persecuted and harassed by the secret police of the occupation administration of Crimea.

History has placed on you, as well as on the leaders of other sovereign states, enormous responsibility not only for the further fate of their people and their countries, but, without any exaggeration and pathos, the future of all mankind.

Human civilization, which stood in the 20th century before the death threats, bringing the fascist and communist regimes, can not and must not to become again a hostage of the irresponsible actions of the current rulers of the Russian Federation, which stepping over all the norms of international law and flouting the will and the right of people on freedom and peace.

It is equally impossible to bring a separate country and individual nations as a victim in favor of the aggressor. The Ukrainian and the Crimean Tatar people, who survived the catastrophic Famine and Deportations, have the right to receive full support and assistance of the international community they belong to.

I would like to take this opportunity to underline the high importance of taking during your meeting in Berlin on August 24, 2015, effective measures to restore the territorial integrity of Ukraine within its internationally recognized borders, ensure Ukraine’s sovereignty over its entire territory, including the Autonomous Republic of Crimea.

No Responses to “Appeal of Chairman of Mejlis of Crimean Tatar People to Leaders of Ukraine, Germany and France”