Architects of Terrorism: Failure of FSB’s Special Operation against Ukraine 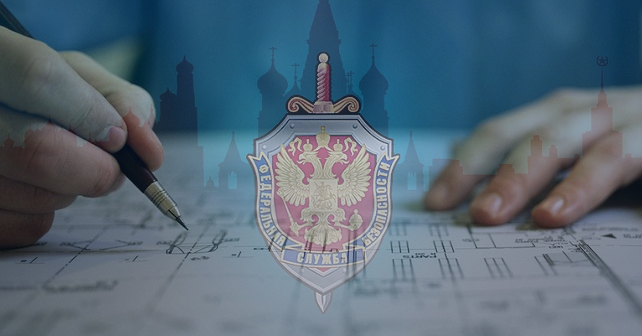 Russia’s hybrid war against Ukraine is not limited to the annexation of Crimea and military operations on the Donbass. This “hybridity” is especially strongly felt by those who directly participated in the Anti-Terrorist Operation in the separate districts of Donetsk and Luhansk Oblasts. They become the targets of new provocations while outside the zone of the Anti-Terrorist Operation. After they return to their civil life, former soldiers and their families can be kidnapped by the Russian special services or used by them in propaganda operations.

International Intelligence Community InformNapalm has obtained exclusive documents that complement the description of one of FSB’s failed special operations, which was publicly disclosed in the briefing of the Security Service of Ukraine on August 17, 2017. We were able to analyze the methods Russian agents used to lure ATO participants into Russia under the pretext of well-paid short-term construction work.

As a quick reminder, the former soldiers were invited to Russia and given detailed instructions which, when fulfilled, could become the grounds for a fabricated charge of attempted terrorist acts. When the citizens of Ukraine realized that they were invited to Russia for anything but construction work, they quickly left the country and informed the special services about the incident. You can find more details of the story, which reads almost like a thriller, in the article published by Radio Liberty.

While choosing the candidates for the provocation, Russian special services used the girl of easy virtue Darya Mastikasheva (VK page, archive), who moved to Moscow from Dneprodzerzhinsk (now Kamianske) in 2014. 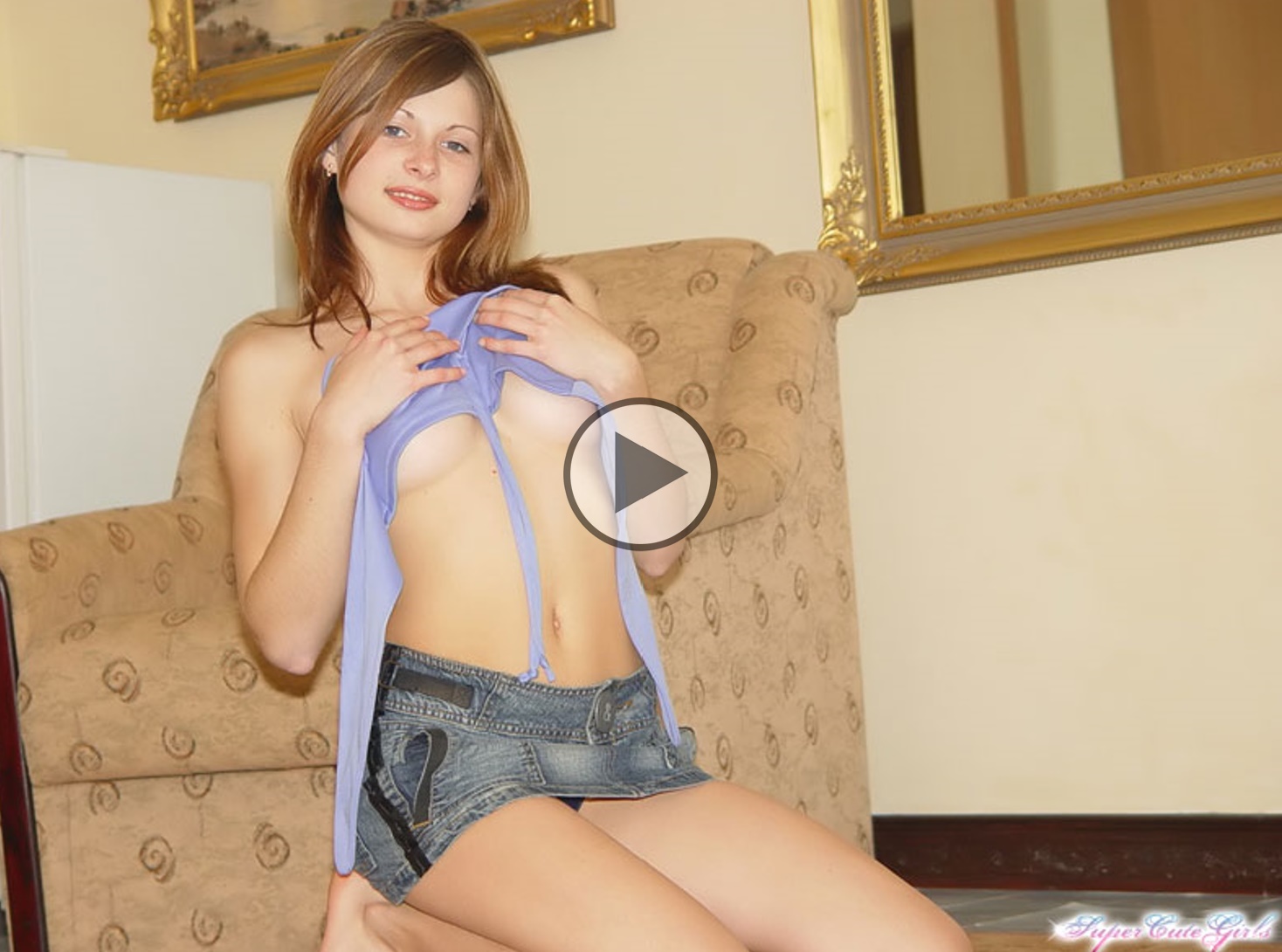 In Moscow, Darya has been living with the Russian propagandist Sergey Sokolov (the details of his background and his role in the propaganda operations of Russian special services are provided below) since 2014. Mastikasheva, who had become the leader of “Golden League”, an organization for support of youth and sport development, started to appear in public with Sokolov quite often. Later Sokolov used Darya in a failed Russian special services operation, taking advantage of her regular visits to her relatives in Dnipropetrovsk Oblast. Later Darya was arrested by the Security Service of Ukraine. 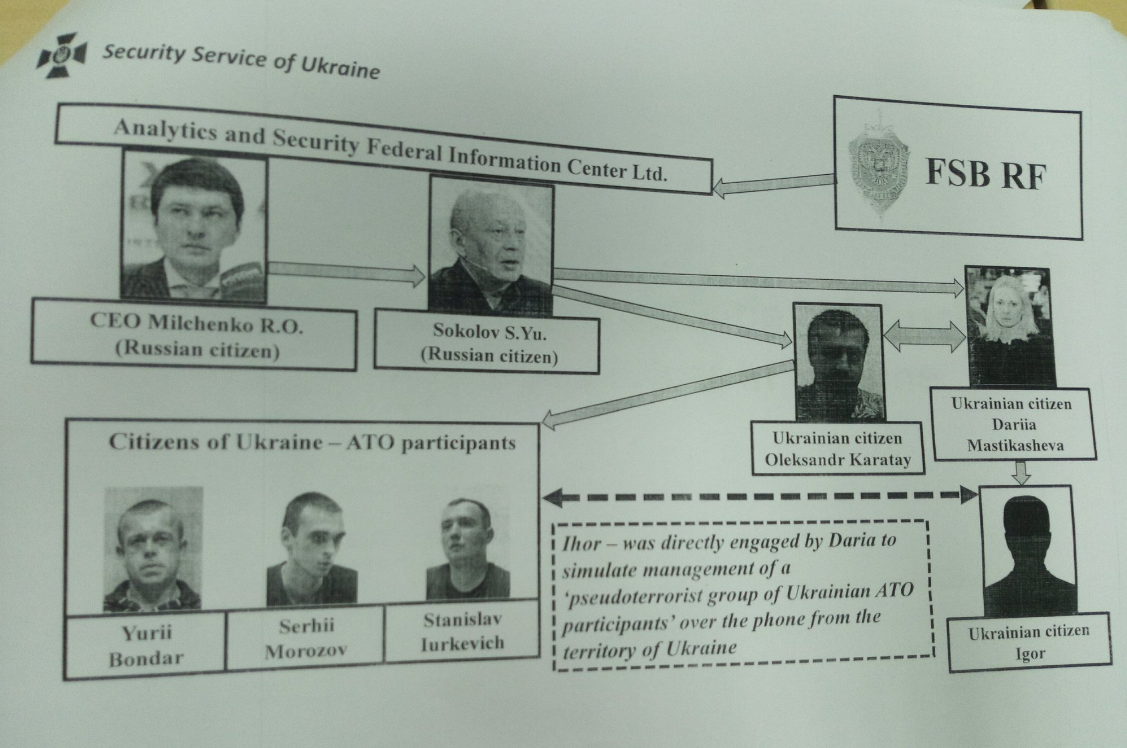 Sergey Sokolov has a rather interesting background in Russian criminal and political circles. He is a well-known Russian propagandist. He claims to be an expert of the private organization “Analytics and Security” Federal Information Center. 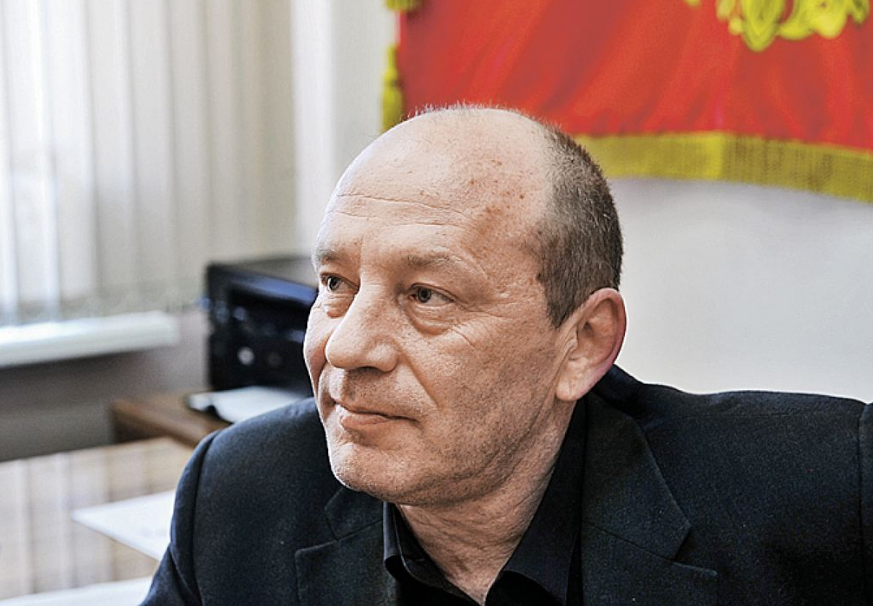 From 1994 to 1999, Sokolov was in charge of Boris Berezovsky’s personal security and was the head of his private security company, Atoll-1. Currently, Atoll is operating under the guise of an information and analytics agency. During Boris Yeltsin’s presidency, Atoll was engaged in illegal wiretapping and collection of compromising materials on top government officials and businessmen. After Berezovsky fled Russia, there was an attempt of holding Atoll and its head criminally liable but the case was derailed.

In one of his interviews, Sokolov was candid: “I said right away – if I am arrested, I won’t stay silent. I’m not stupid enough to do time for somebody else. Of course, I had to help Boris and soft-pedal the case.”

In his interview  to Moskovskij Komsomolets published in issue 2240 of June 22, 2006, Sergey Sokolov also spoke of Boris Berezovsky’s shadow business with the Chechens.

“In LogoVAZ reception house, the guests from the Caucasus stayed day and night. I often saw Arbi Barayev, Zakayev, Basayev there. Also, Udugov, who never took off his papakha. Many came armed. I remember a certain colorful fighter who strolled around the club in his camo brandishing his Stechkin pistol. In about 1996, Boris realized that if he played his Chechnya card wisely, it can win him both political dividend and a lot of money at the same time. He engaged in ransoming people kidnapped by Chechens. It was a never-ending cycle. The thugs would kidnap people, get ransom and use the money to kidnap more people”.

In the interview, Sokolov also admitted that he personally carried the money for Chechen fighters.

The special operation of the Ministry of Internal Affairs against criminal activities at “AvtoVAZ” in 1997-1998, when it was under the control of Berezovsky and Chechnya criminals, showed that the criminals connected to “AvtoVAZ” killed more than 65 company managers and business competitors. When asked whether there were fighters among the Atoll personnel, Sokolov answered, “They were not fighters, but high level professionals, since firing a sniper rifle and planting explosives is also a sort of art.”

On May 3, 2016, the BBC2 channel ran a story on the tragic events of Flight MH17, which, according to our data, was shot down in Donetsk Oblast by a Buk missile launcher of Russia’s 53rd Anti-Aircraft Missile Brigade. At the Kremlin’s suggestion, Sergey Sokolov made an expert statement, now in the capacity of a “private investigator”. He assured the audience that the Boeing was destroyed by bombs detonating inside the plane: “The explosion was inside. The explosives were planted in the aircraft back in Amsterdam. This operation was performed by the special services of Ukraine and the Netherlands”.

Sokolov also said that he allegedly managed to obtain the recording of the telephone conversation between two CIA agents preparing two bombs for Flight MH17.

However, this “evidence” was not presented and remained just empty statements of the Russian “expert”, like many other fake stories told by Russia to divert the attention of the investigators and the global community from the true perpetrators.

Sokolov and the Voronenkov case

Sokolov’s other information project concerns the murder of Denis Voronenkov, ex-deputy of the State Duma of the Russian Federation. Sokolov accused the “Dnepropetrovsk organized crime group” for which, according to Sokolov, Denis Voronenkov was working. None of the statements made by Sokolov were ever confirmed.

Sokolov and the Minors’ Case

The most absurd case in the propagandist’s service record is the fake story about the supply of “young boys and girls” to Poroshenko, Yatsenyuk and Turchynov.

Sokolov and Mastikasheva: the coordination of the provocation against ATO participants

From the practical point of view, the most interesting operation was the one in which Sokolov acted as an FSB’s contractor and where he engaged his mistress, Darya Mastikasheva, in recruiting veterans of the Anti-Terrorist Operation and using them later in a political provocation.

We managed to obtain screenshots of notes stored in Mastikasheva’s phone.

The initial analysis performed by InformNapalm volunteers shows that we obtained the plans of the provocation in the making. The correspondence indirectly points at the action organizers. Mastikasheva received the documents from Sokolov. The action plan consisted of seven stages. We use the most plausible to us interpretations of some abbreviations. We also offer copies to journalists for analysis. 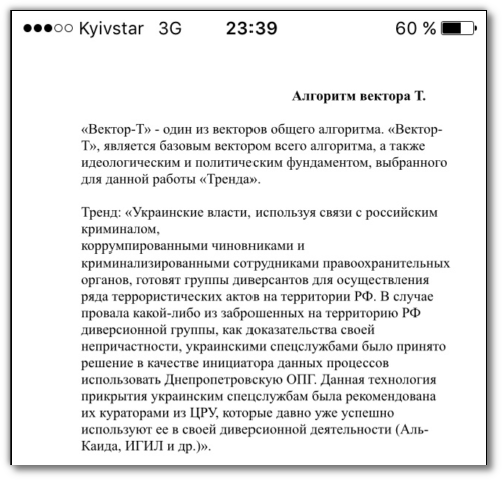 Vector T is one of the vectors of the general algorithm. Vector T is the main vector of the entire algorithm as well as the ideological and political basis of the Trend selected for this operation.

Trend: Ukrainian government uses its connections with Russian criminals, corrupt officials, and criminalized members of law enforcement to prepare sabotage groups to execute acts of terrorism in the Russian Federation. Should any sabotage group infiltrated in Russia fail, the Ukrainian special services decided to present Dnepropetrovsk organized crime group as the initiator of all these acts, as a way to deny their involvement. This method of cover-up was recommended to the Ukrainian special services by their CIA supervisors, who have been successfully using it for a long time in their covert operations (Al-Qaeda, ISIS, etc.) 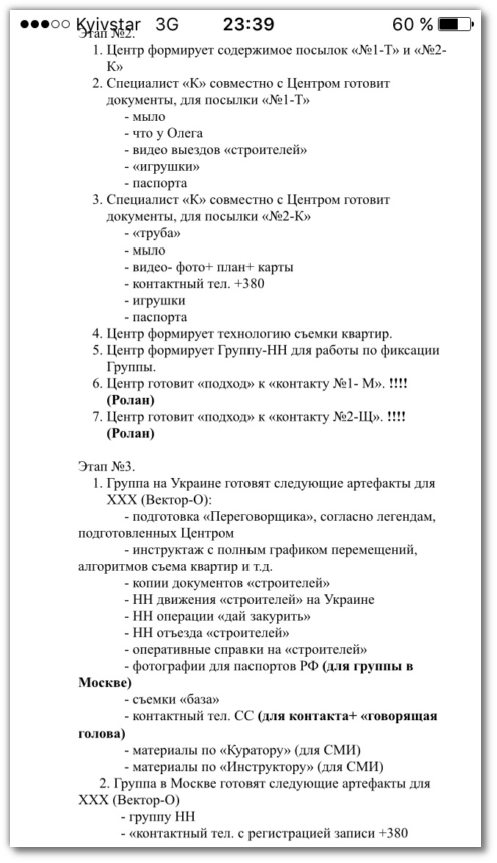 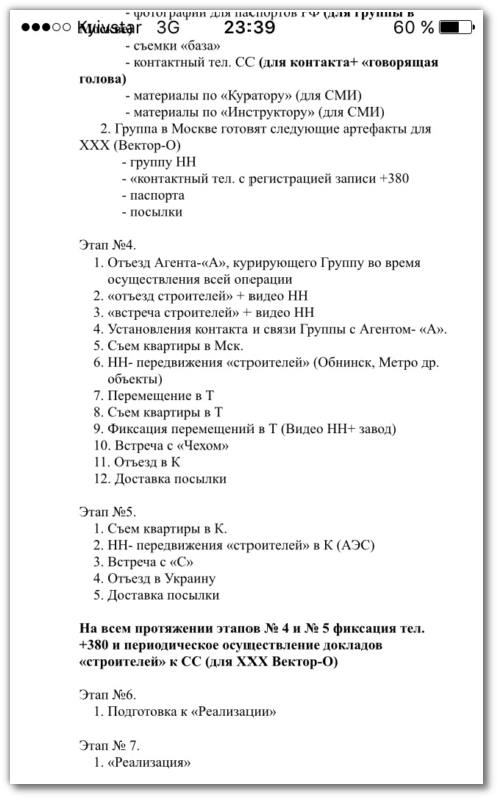 The FSB operation failed at Stage 4, when the group of “construction workers” realized that they were being used and hitchhiked their way back to Ukraine.

So, each citizen of Ukraine, especially former or active military who participated in the Anti-Terrorist Operation, as well as their families, can become the object of a special operation by Russian special services. At the same time, young girls offering jobs in Russia, easy income, intimate acquaintance and other services to citizens of Ukraine may be in fact members of an agent network deployed in Ukraine to catch careless souls. Stay alert.

One Response to “Architects of Terrorism: Failure of FSB’s Special Operation against Ukraine”