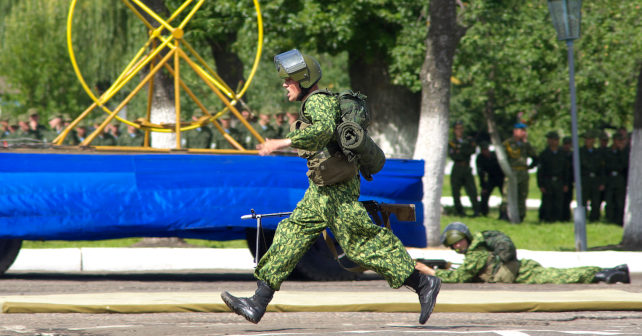 On August 16, Дзяніс Івашын  the Belarusian journalist & investigator of InformNapalm international intelligence community  has wrote on his Facebook page:

The head of the regime of the internal occupation announced plans to relocate units of the Belarus’ 103rd Vitebsk Separate Airborne Brigade (103rd Brigade) to Grodno.

The reason for the decision was ′′a challenging situation at the Western borders”. Obviously, this is a cover up reason, and the real goal is a possible preparation to crash mass protests in Grodno which are getting out of control.
Explain why.

Washington and Warsaw approved a military cooperation agreement just yesterday, August 15. It includes increasing the US military personnel by 1,000 additional troops, to include the forward elements of the US Army’s V Corps headquarters and a Division headquarters in Poland. Presently, approximately 4,500 American military personnel are on rotation in Poland. The additional arrival of US soldiers is only planned.
However, according to the information from open sources, the units of the 103rd Brigade have already been sent to Grodno.

The US V Corps consists of tanks and mechanized units armed with the Abrams main combat tanks, the Bradly Fighting Vehicles, tactical missiles, 203-mm 155-mm howitzers, helicopters, anti-aircraft artillery, and more. For comparison, the Special Operations Forces (SOF), which include the 103rd Vitebsk Brigade, deploy Soviet modernized BTR-70 and BTR-80, the D-30 22-mm artillery guns, the Fagot, Konkurs and Metis anti-tank systems. They don’t deploy the main combat tanks. The key tasks of the SOF of Belarus are: counter-diversion activities, reconnaissance, and fight against illegal armed formations (IAF). It is obvious that the 103rd Vitebsk Brigade cannot fight successfully against the American military units based in Poland.The 103rd Brigade’s goals are completely different.

This task can be accomplished by the 6th Separate Mechanized Brigade of the Republic of Belarus which is based in Grodno and has the T-72 main combat tanks in service. To respond to the extension of the NATO armored units in Poland, it would be logical to relocate the mechanized units based in Grodno, but not the Special Operation Forces.

It is noteworthy that the military equipment of the Special Operation Forced was seen in Grodno on August 10, on the second day of protests (bit.ly/2Fkze3F). At that time, Grodno was a site of the largest wave of protests in Belarus in which employees of a number of large enterprises participated. The white-red-white flag has flown over tall buildings in the center of the city. Protests mood seized the whole city. On this background, the relocation of army units from Vitebsk is a manifestation of complete distrust of local authorities. In this context, the residents of Grodno are seen as “illegal armed formations”. The city is gradually getting out of control of Lukashenka’s regime.

Therefore, the most likely main task of the units of the 103rd Vitebsk Airborne Brigade in Grodno is to engage its force in the potential suppression of mass protests.

(Photo:Personnel of the 103rd Guards Separate Mobile Brigade during a demonstration. Wikipedia.org)