What is burning the Ministry of Defence of the Russian Federation? InformNapalm to start series based on leaked information 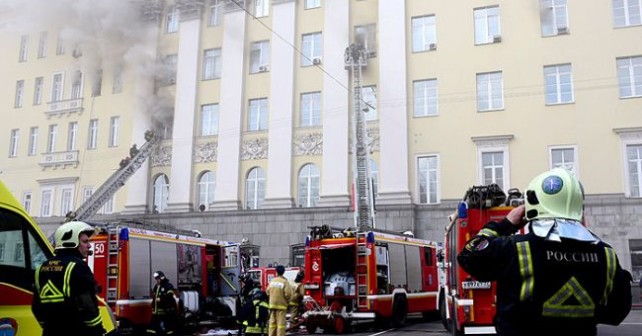 On April 3, 2015, the international volunteer community, InformNapalm, started publishing information based on breaking emails of key persons involved in coordinating activities of mercenaries, Russian soldiers, and militaries in Donbass and Syria.

The emails were obtained by a faceless group of Ukrainian hackers (Falcons Flame (#FF)) and passed on to InformNapalm team for analysis. We received over 30 GB useful information, about 12,000 letters and over 6,000 private messages from social media. Many of the conversations expose participation by the Russians in both Ukraine and Syria, demonstrate funding sources, disclose the network of agents and informers working in the rear – on Ukrainian-controlled territory.

The #FF hackers, OSINT (Open Source Intelligence) experts from InformNapalm and Mirotvorec Centre passed initial information to Ukrainian security agencies prior taking any action. After a pause the team switched to the active phase.

Data with correspondence was not obtained through a classic cyber hack – it was a result of far-reaching operation that detected and made use of weak links in a vast chain of organizations and agents of influence working for Russian security services.

Taking control over the email accounts became possible after Russian spy Mariya Koleda, also known as “Bagira”, was caught by Security Service of Ukraine on April 8, 2014 (she was absolved on September 16, 2014 via a prisoner exchange). After release she was appointed as Acting Head of the Department of Public Relations of the so called Donetsk People’s Republic Ministry of Foreign Affairs.

The operation was successfully followed up by the burning of the whole network of Russian agents – large organization that is called  “The Union of Donbass Volunteers” (UDV). Massive data leak from the UDV gave our team 5,000 profiles of mercenaries recruited to take part in combat in different parts of the world for the benefit of the Russian Federation. The leaked database contains not only profiles of Russian citizens, but also foreigners recruited to act as mercenaries and propagandists of so called “Russian World” in Western countries.

The Security Service of Ukraine (SSU) has already started cutting the tentacles of this network. Security officers are shutting numerous sources of funding and are hunting Russian spies down.

The information that is disclosed by InformNapalm does not contain data that may hurt SSU operations. On the contrary, it will help in bringing the whole terrorist network down.

This video demonstrates only a small part of #FF’s work which will be analysed by InformNapalm team step-by-step and reported to public once our experts sift through data.

Today we will publish the first part of our investigation based #FF’s data. It will tell about visa support of foreign mercenaries who enter war zone in Donbas through Russian territory.

You can bookmark this page to stay tuned and learn about new parts of our investigation as they go online. Sharing this page on social networks helps to fan the flame at the foundation of The Ministry of Defense of the Russian Federation.

The list of newly released investigations based on massive data leak (to be updated):

5 Responses to “What is burning the Ministry of Defence of the Russian Federation? InformNapalm to start series based on leaked information”