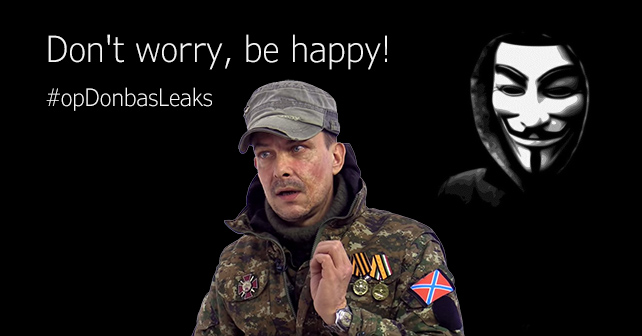 On Cosmonauts Day, 12th of April 2016, hackers drove the Russian propagandist Gennady Dubovoj on the 1st Sloviansk Brigade of the «DNR» terrorist enclave to hysteria. In connection with the hacking on his page on the social network «VKontakte» he recorded a video message.

In fiery speeches about «honorable Russia», Gennady Dubovoj asked rhetorical questions while speaking sarcastically about the Russian security service’s inability to protect the «military in cyberspace». At the same time, he also stressed that: «Ukrainians are hardworking and focused».

On Friday, the 8th of April 2016, the Municipality of Sevastopol commemorated the occupation of Crimea. When it was time to sing the Russian national anthem, a lyric with a completely different content was shown on the screen. An «opus» of patriotic hacker groups.

In early April 2016, the hacker group Anonymous #FF Falcon Flame provided InformNapalm with obtained hacked data for further analysis and processing. The material consisted of 30 GB of information, about 12 000 letters, 6000 posts on social networks. All this casts a light on the Russian side’s actions in the military conflicts in Ukraine and Syria. The material also shows a large network of agents, informants, tutors and funding sources. The hackers have dubbed the operations to #opDonbasLeaks as they began on the 3rd of April 2016, in connection with the #PanamaPapers.

On the 11th of April 2016, #FF Falcon Flame informed on their Twitter account about plans for an upcoming hacking of Russian propagandists.
More on the topic

∙ InformNapalm advertises the series «What burns the Russian Defense Ministry» based on data leaks
∙ Russia opens visa for terrorists operating in Ukraine: Leaked passport details of mercenaries
∙ Medical Assistance for Russia’s VIP mercenaries
∙ Hackers and OSINT-analysts uncover details of a Russian hybrid soldier
∙ Mercenaries in Donbas revealed by a former deputy head of the FSB
∙ Database of more than 60 military units, revealing the Russian involvement in the fighting in Ukraine.

CC BY 4.0 – Original article written by InformNapalm. Upon reprint or reuse of the material, an active link to our project is desirable.