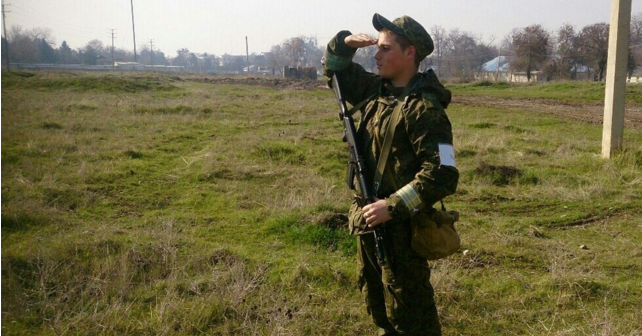 InformNapalm continues a series of publications based on the analysis of an array of hacked data of the Russian mercenaries and active military personnel involved in the military aggression against Ukraine in Donbas. As we wrote earlier, Ukrainian hackers of the anonymous cyber-group alliance FalconsFlame and Trinity launched an operation at 00:00 on May 9, 2016 coded   #OpMay9. It involved 9+ successful hackings of the web sites of Donetsk People’s Republic (DPR) terrorist organization, Russian private military companies operating under the protection of the FSB in Ukraine and Syria, as well as Russian web outlets disseminating aggressive anti-Ukrainian propaganda. In addition to elegantly defacing the sites of the occupants, the alliance handed over to InformNapalm data from more than 40 hacked social network accounts, mailboxes and cloud accounts of the Russian war criminals. More on the topic: Why the Russian Defense Ministry is burning? InformNapalm announces a series of publications based on the leaked data

The object of this investigation is Yaroslav Volkov, DOB June 12, 1992, a Russian serviceman serving under contract at the 201st Gatchina military base in Tajikistan, unit No. 92752, a native of Chelyabinsk, initial civilian occupation – car mechanic. Social networks accounts (profile, photo album), (profile, photo album). Judging by the photos in December 2014, Yaroslav was in the Rostov region, at one of the training camps serving Russian invasion forces. Then, prior to May 2015, he served at his home station, on the border between Tajikistan and Afghanistan. His private messaging correspondence indicates that one of his colleagues, who had been sent to Ukraine under the guise of a militant, was killed in action in Slovyansk, Donetsk region. On May 25, 2015, Yaroslav reports that he is in Lugansk, and that he was deployed to Ukraine through Rostov. After a mission to Donetsk and Horlivka, under the guise of a “volunteer” with the callsign “Tikhiy”, in mid-August 2015, he returns to Tajikistan, where he continues to serve at the 201st military base of the Russian Armed Forces. Photos below corroborate the fact of participation of  Yaroslav Volkov, a Russian serviceman on active military duty, in the fighting in Donbas. 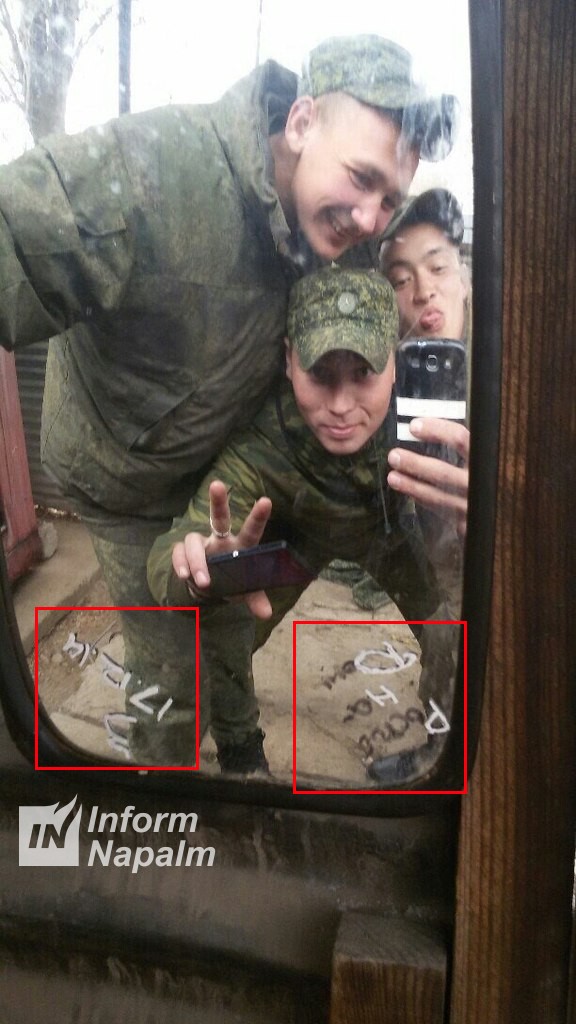 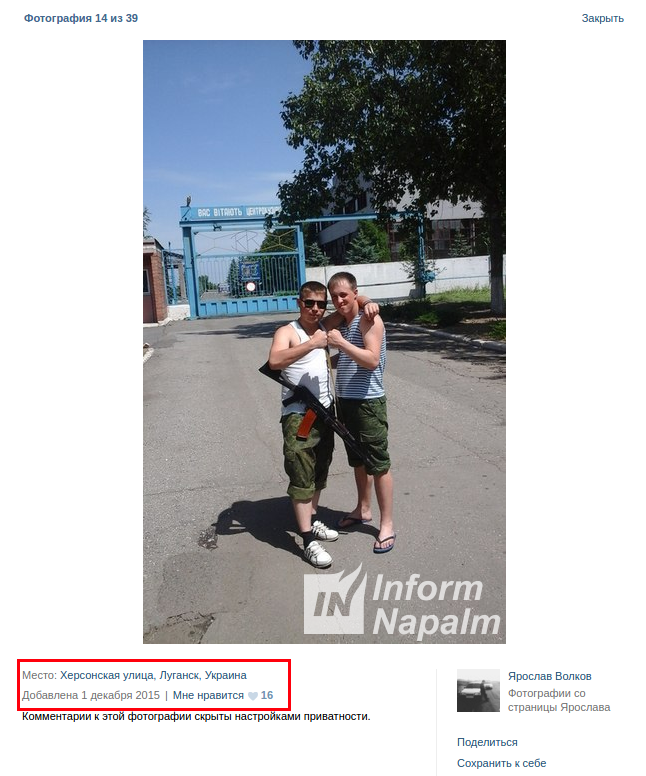 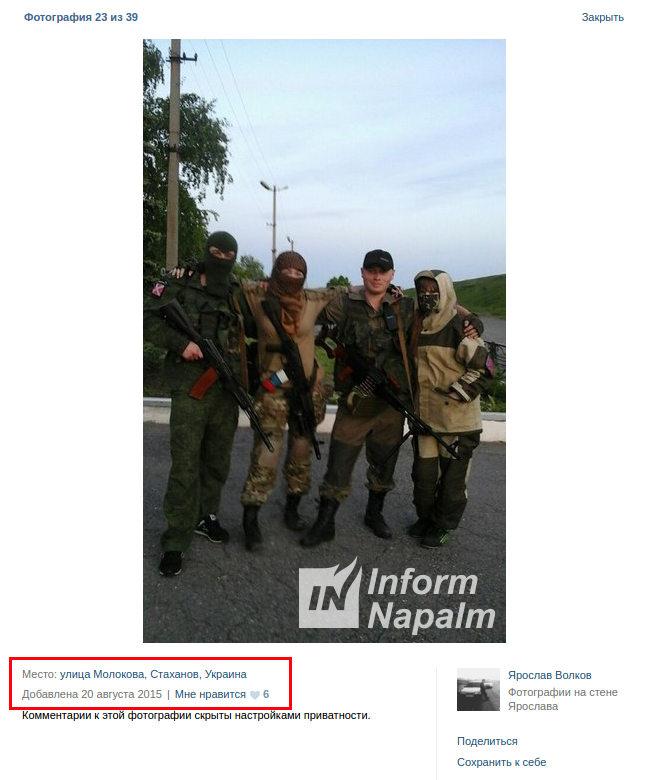 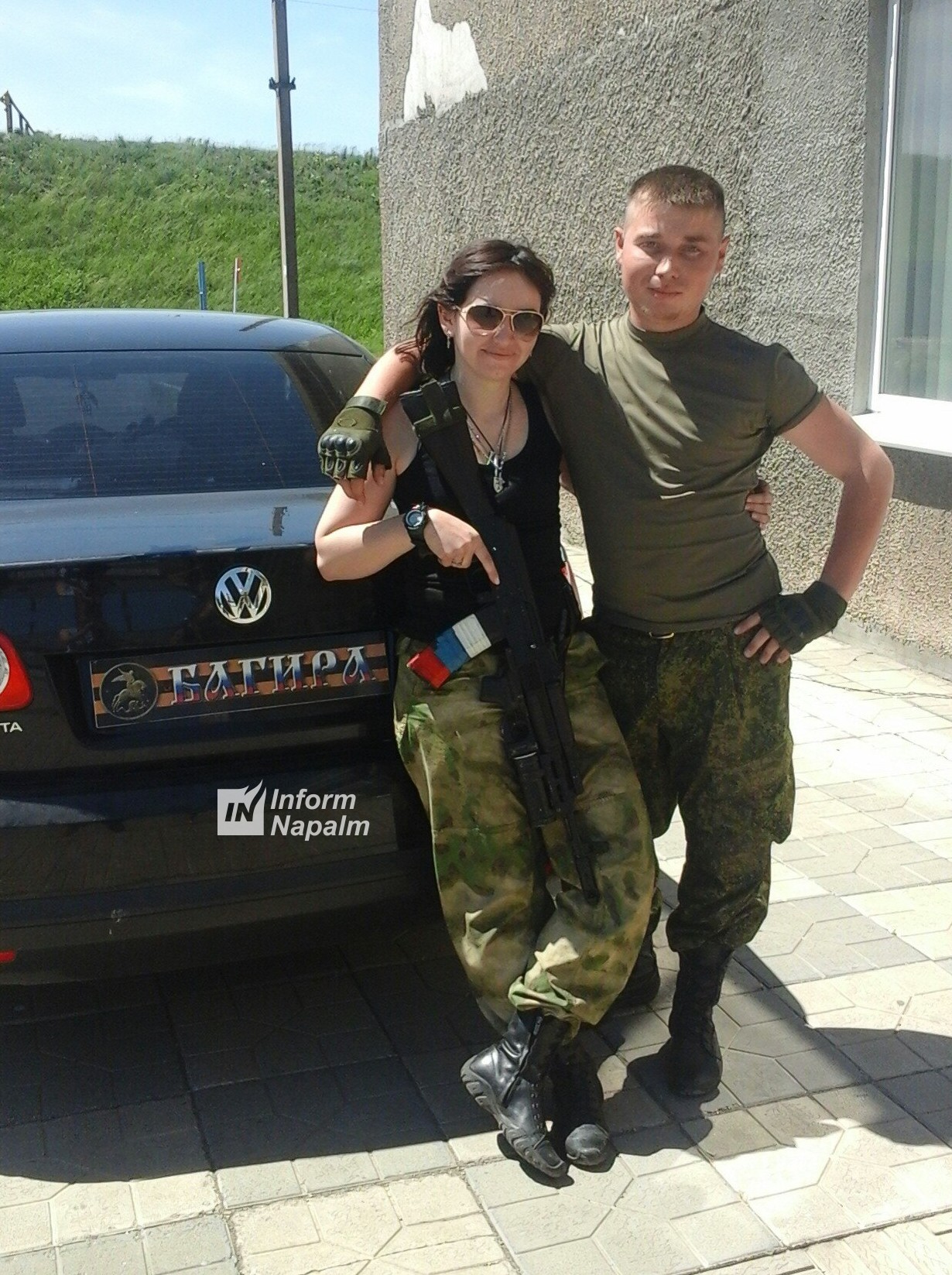 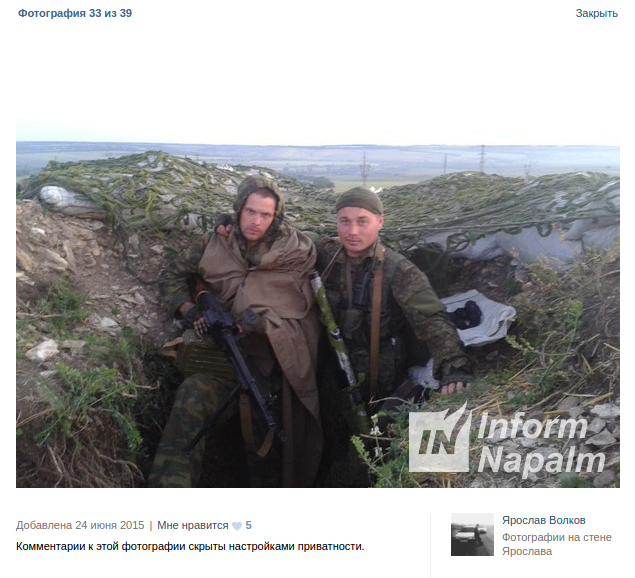 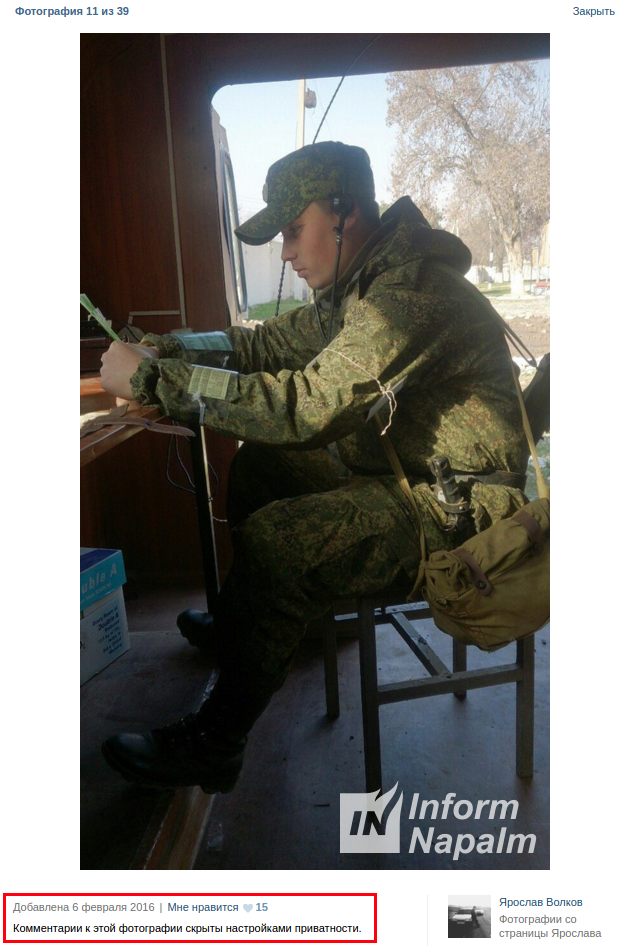 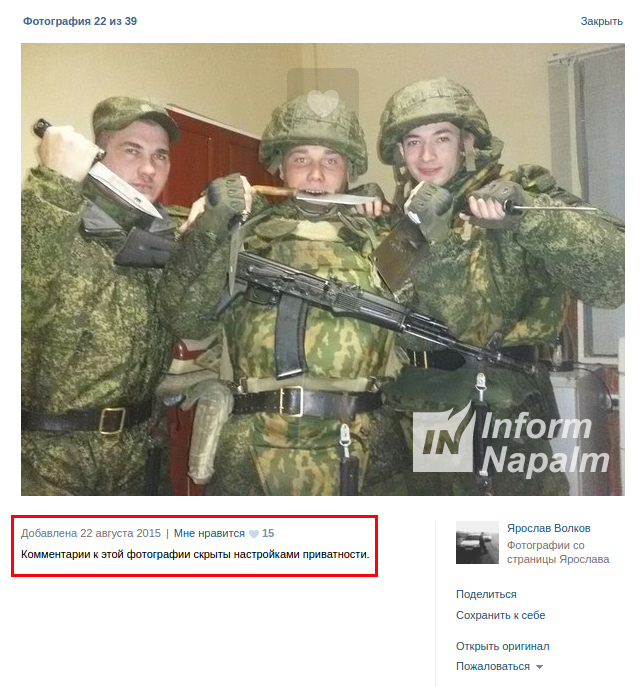 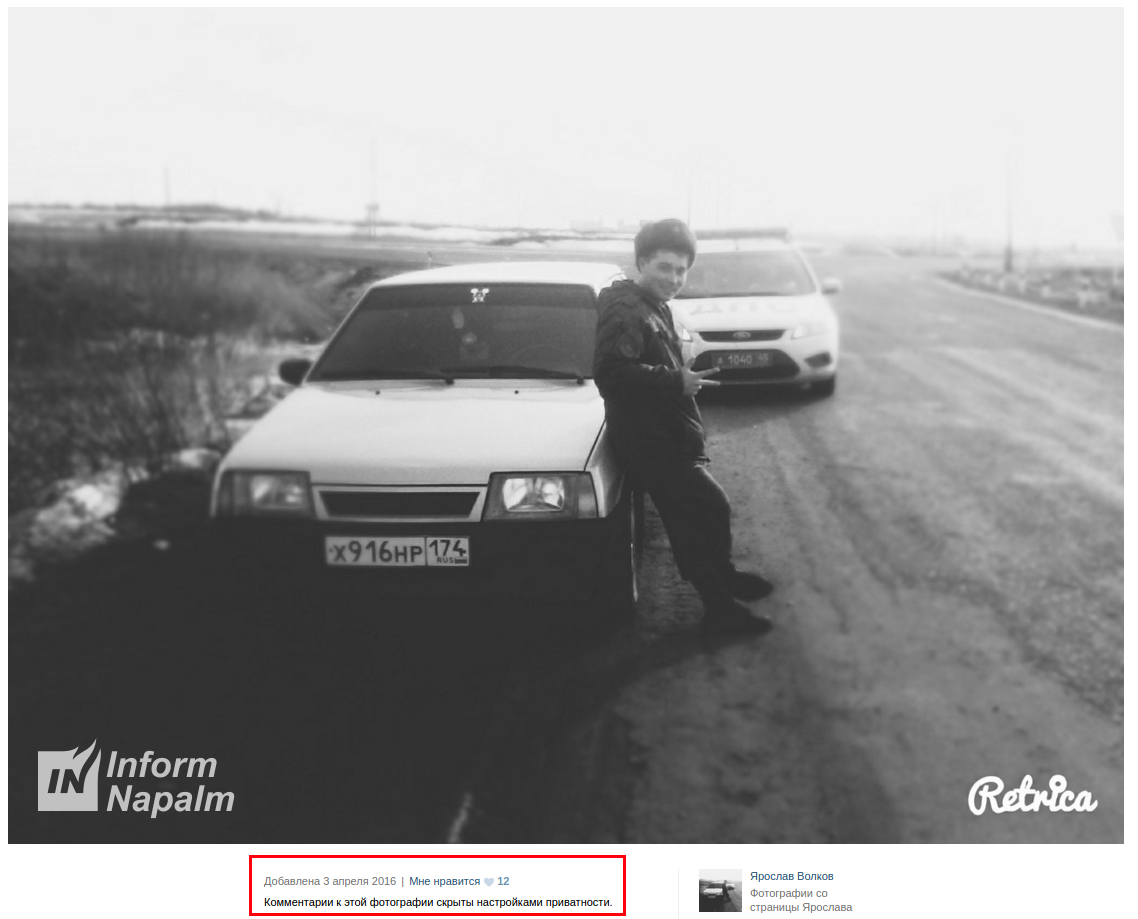 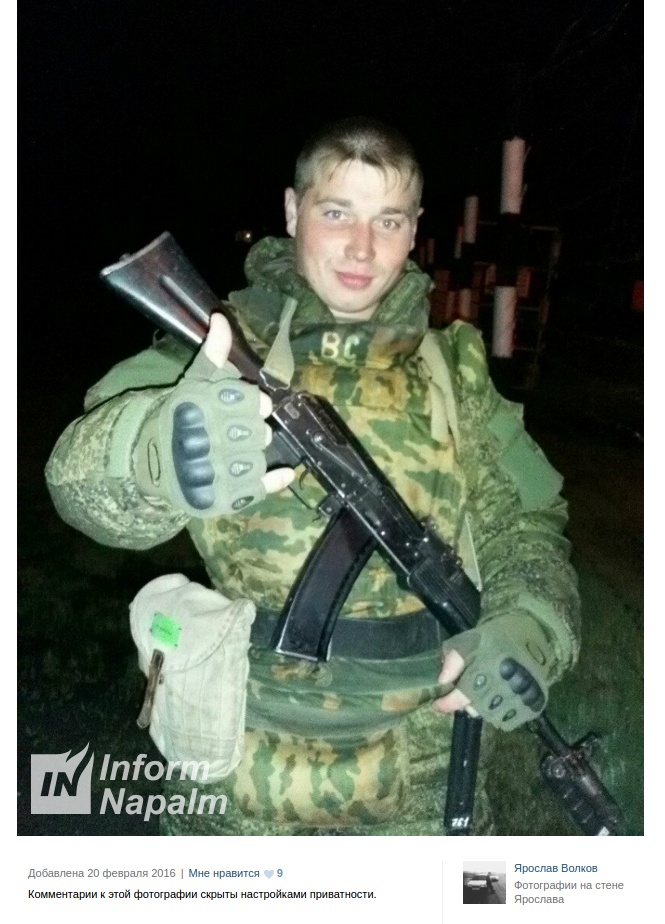 The correspondence with Denis Chameyev (Profile, photo album, https://vk.com/id66946923) directly confirms that Russia is sponsoring the war in the Donbas, as well as evidences other facts:

As we see, Russian mercenaries and soldiers are engaged in banditry, looting. racketeering and property seizure. There is no ideology under the “Russian world” and under what is happening in the occupied territories of Donbas. But there are there are these 22-year-old Russians, who are “bored” and want to play soldiers, and who are wallowing in the power over other people, granted to them by the weapons in their hands. They carry out criminal orders of the Kremlin, in parallel engaging in looting and profiteering at the expense of the inhabitants of another country. Just like in South Ossetia in summer 2008.

Read more: investigations of the InformNapalm community based on the analysis of hacked Russian war criminals’ data:

This publication was prepared by the volunteer of the InformNapalm international community Mikhail Kuznetsov based on the data obtained by the hackers of FalconsFlame group.

(CC BY 4.0) information specially prepared for InformNapalm.org site, an active link to the authors and our project is obligatory for any reprint or further use of the material.

We should like to remind that the database of InformNapalm investigations proving participation more than 70 military units of the Russian Armed Forces in the fighting in Ukraine is available at: http://bit.ly/RussianPresenceEN. We call on our readers to actively share our publications on social networks.
You can also support the site and make a donation for the development of the project at Crowdfunding. All proceeds will go exclusively into the technical support of InformNapalm.org website.