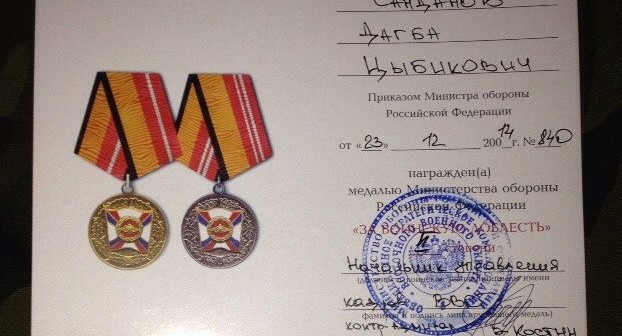 While the Russian servicemen, who participated in the occupation of Crimea, were generously decorated by the Russian military command with the medals “For the Return of Crimea”, the combatants in Donbas don’t get much official recognition. And when they do, usually it comes in the form of the medals “For Military Valor.” For example, we discovered that in September 2014 some paratroopers of the 247th Airborne Assault Regiment of the 7th Airborne Division were awarded for their participation in battles in Donbas.

In some exceptional cases, Russian servicemen are decorated with medals “For Courage”, as it was in case of Anatoly Osipov, the contract serviceman of the 8th Mountain Brigade, who lost his arm in Donbas.

Here is a collection of photos of Dagbit Sandanov, the serviceman of the 5th Armored Brigade from Buryatia, who has been “on a trip” to Rostov region since November 2014. Among his photos one can find the certificate to the medal  “For Military Valor” of the second degree, issued by the order of the Minister of Defense of the Russian Federation №840 dated 12/23/2014, signed by the personnel department commander of the Eastern Military District. There are other photos on his page, pointing to his present location. 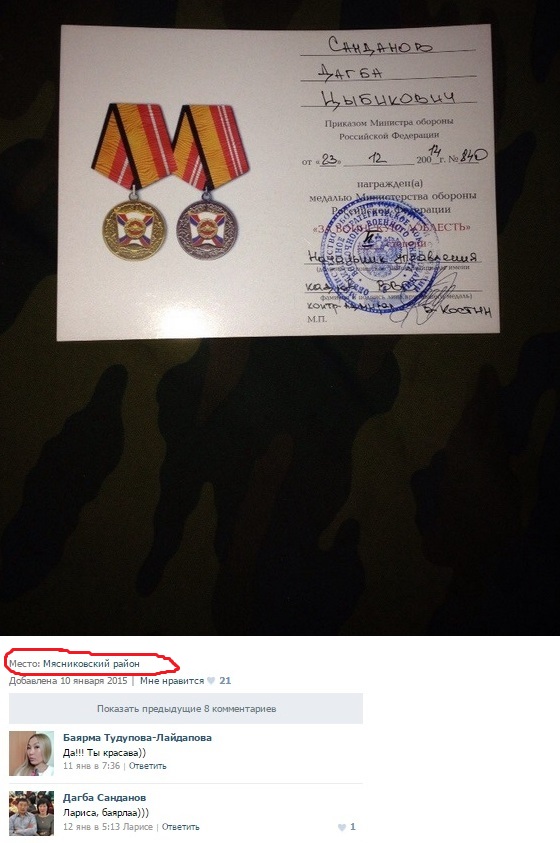 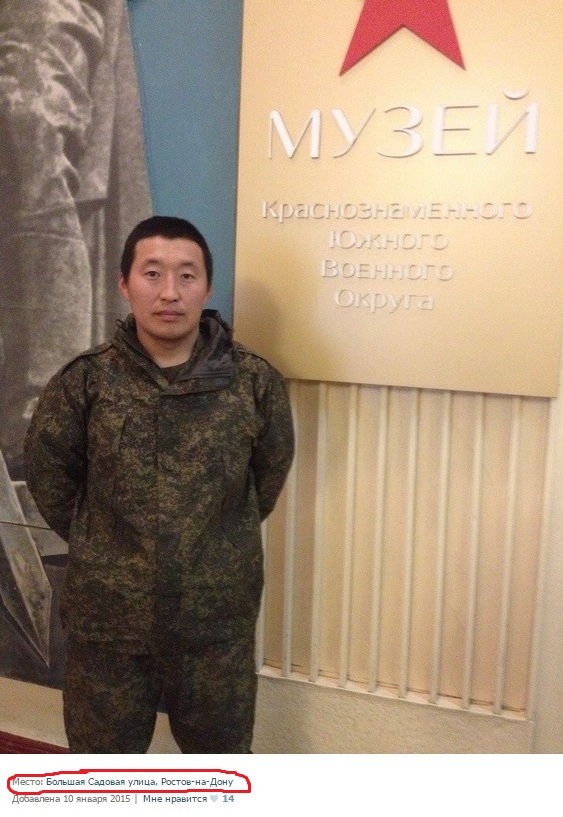 Medals “ For Valor” are not awarded for nothing, so we can assume that Sandanov managed to visit not only the Southern Military District Museum, but also Ukrainian Donbass.

On a related note, we would like to share the information from a source close to the servicemen of the 5th Armored Brigade. He reports that in December 2014 a group of servicemen from a combined unit of this brigade participated in the deployment of Russian military equipment from Rostov region to Donbass. During one of these visits to Ukraine, the Buryat soldiers came under the fire of the Ukrainian Army and lost several items of their equipment.  According to the same source, a rotation of personnel of the Tank Brigade is being prepared now. Contracts have been signed with new servicemen, since some of veterans refused to go to the South under the pressure of their relatives and the Buryatia community.

– “Towards Kiev” – a unit of the 5th Armored Brigade of Rostov group of invasion forces;

– “ Towards Kiev -II″ – additional information on a unit of the 5th Armored Brigade of Rostov group of invasion forces;

News of Deployment the 5th Tank Brigade of the Russian Eastern Military District to the Ukrainian border.

– Buryatia community against the war in Ukraine;

Buryat community against the war in Ukraine

This information was gathered exclusively for the project InformNapalm. Copying and use of the materials are allowed provided that a reference to the author and a link to our website are given