Conflict in the Kerch Strait, Information War, and Destabilization of Ukraine 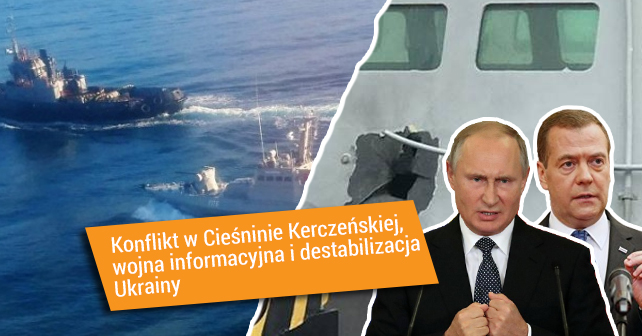 The attack by the Russian forces on the Ukrainian navy ships, the recent strengthening of Russian military capabilities in the Azov Sea, and the regular obstruction of navigation in this area are, among other things, an attempt to destabilize the Ukrainian state. The extended delays of the merchant ships passing through the Kerch Strait to or from Ukrainian ports of Berdyansk and Mariupol caused by the actions of the Russian government, threaten the economic stability of the region. As a result of the partial blockade of the Ukrainian ports, profitability of the local industry, including the metallurgical plants in Mariupol that export their products to such countries as Vietnam, South Korea or the United States, has been negatively affected. A huge role in this process was played by the so-called Crimean bridge. As the recent events have shown, it can be used as a gate that can be locked by simply anchoring a barge across the passage. The complete blockade of the Sea of ​​Azov, which could be one possible way for Russia to respond to Ukraine’s diplomatic activities (lobbying for new sanctions), would have a huge impact on the economy in the south and east of Ukraine. Decline in the local industry highly dependent on ports and exports would lead to a significant rise in unemployment and social discontent.

Aggressive actions by the Russian Federation are unlikely to remain limited to political or economic pressure. Russian media reports and information published by the Ministry of Defense of Ukraine confirm that the Kremlin is conducting an active disinformation campaign to destabilize the Ukrainian state. 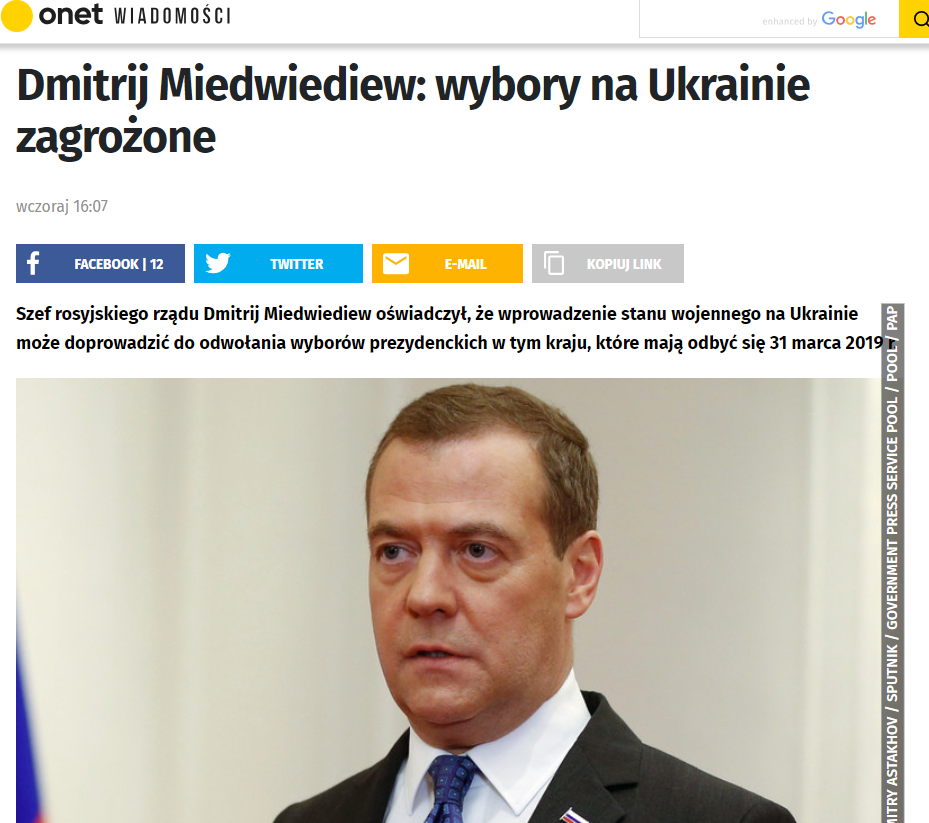 The main message circulated by the Russian media concerns the introduction of the martial law in Ukraine. This decision is supposedly motivated by pure politics and aims to postpone the date of the presidential election. This narrative is spread not only in Russia and Ukraine, but also appears in the media of the EU countries, in particular in Poland, for instance in the publication of the onet.pl portal “Dmitry Medvedev: Elections in Ukraine at risk”. 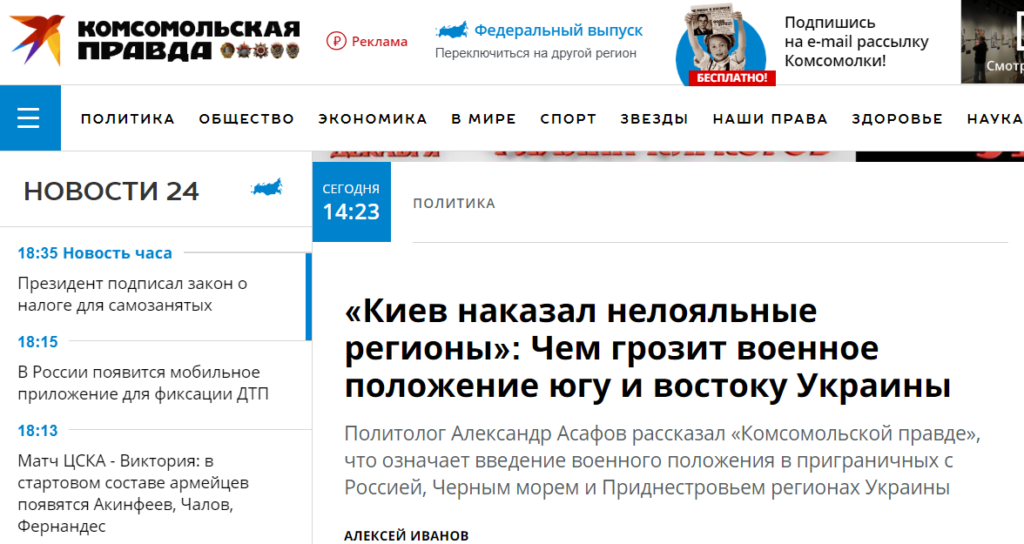 Russian media’s dissemination of this message is aimed to decrease the trust of Ukrainian citizens in their power, as well as to grow social discontent. A new wave of messaging on this topic appears to be targeting the Ukrainian president and the reasons behind the actions of his administration. One of the narratives created by the pro-Kremlin media interprets the introduction of the martial law as a form of punishment of the “disloyal”, as described by the Russian propaganda, regions in the south and east of Ukraine.

Explanations of the introduction of martial law fit into the context of future presidential elections. According to the Russian narrative, Petro Poroshenko is not only delaying the date of the election but is deliberately trying to hold them only in those regions where he has support. According to the Kremlin media, such as the Komsomolskaya Pravda newspaper, the martial law in the eastern and southern regions should give Poroshenko victory. It’s worth noting that this type of message appears to be aiming to incite internal conflicts by calling the East and South of the country less patriotic and more prone to vote for the candidate with the less anti-Russian, as seen by the Russian propaganda, views.

The autocephaly of the Ukrainian Orthodox Church is presented as another lever used to influence the election. According to Russian media reports, the “fracture” in the Ukrainian Orthodox world, coupled with the so-called Ukrainian, or “Poroshenko’s” provocation in the Sea of ​​Azov, should create conditions for the reelection of the current president.

Pro-Russian politicians in Ukraine also play their role in the legitimization of these narratives. One of the leaders of the pro-Russian opposition, Yuriy Boyko, said that the introduction of the martial law in Ukraine is directly linked to Poroshenko’s low rating. This is one of the talking points spread by the Russian RIA Novosti news agency. 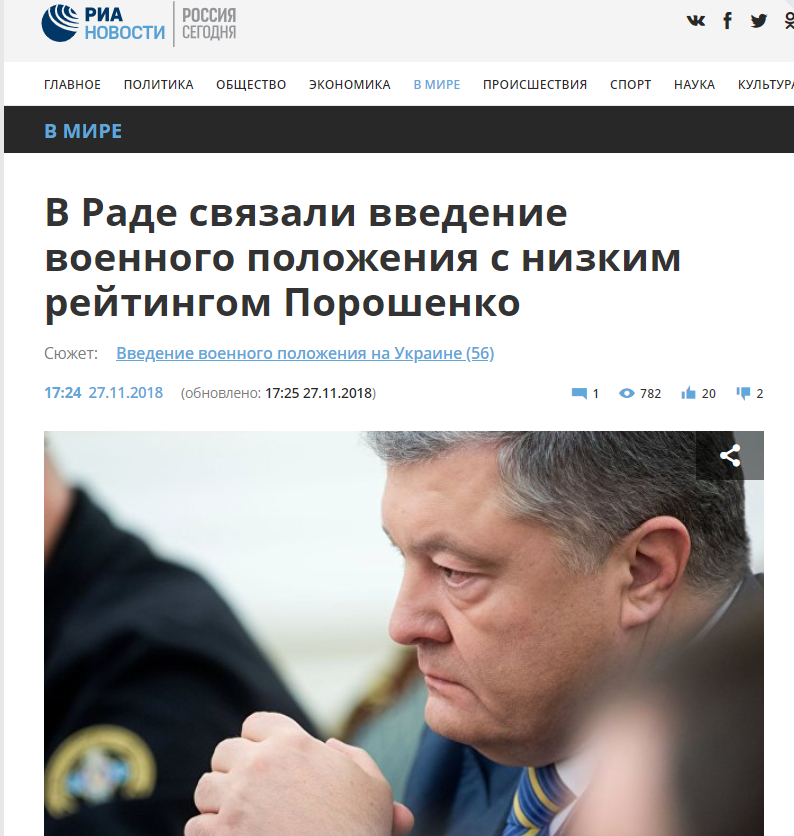 The dissemination of narratives that attack the positive image of Ukraine, Poroshenko, the government of Ukriane, and its armed forces, serves the needs of Russia’s internal propaganda and is also used to achieve Kremlin’s external goal of the destruction of Ukraine’s position while strengthening its own in the West. It should be noted that Russian media is also consumed by Ukrainians, and Ukrainian media, especially the pro-Russian outlets Newsone, Inter, and 112 often cite Russian publications. The news published by Russian media spread through social networks, including VKontakte, which is officially blocked in Ukraine but can be still accessed with a little effort. The contacts between Ukrainian citizens and their relatives living in Russia also help Russian news reports reach Ukraine. The people who consume Russian media may unknowingly assist the Kremlin.

A wave of misinformation, helped by the many doubts Ukrainians may have about the true purpose and consequences of the martial law, could seriously destabilize the situation in the east and south of the country. The greatest risk of destabilization exists in the border regions. There is evidence that border areas could be the main target of this destabilization. One example is the mass distribution of SMS messages received by some residents of Sumy Oblast. The messages that claimed to have been sent on behalf of the Ministry of Defense, urged the citizens to go to the nearest military units as soon as possible. The Ministry of Defense of Ukraine, in an official statement, accused the Russian Federation of this provocation. 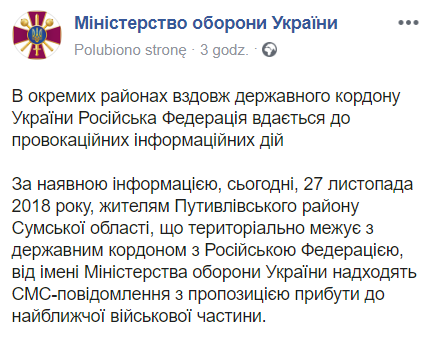 A similar case took place in Poland. According to a statement from the Governmental Security Center, the residents of the eastern regions of the country received text messages obliging all men aged 18-65 to go to local administrations, presumably due to events in Ukraine. Judging by the fact that the Ministry of Defense of Ukraine and the Internal Security Agency of Poland published their releases just one hour apart, the two attacks are related. Such activity could be an attempt to test the reactions of Ukrainian and Polish societies. It could also be a test of the security services of both countries. 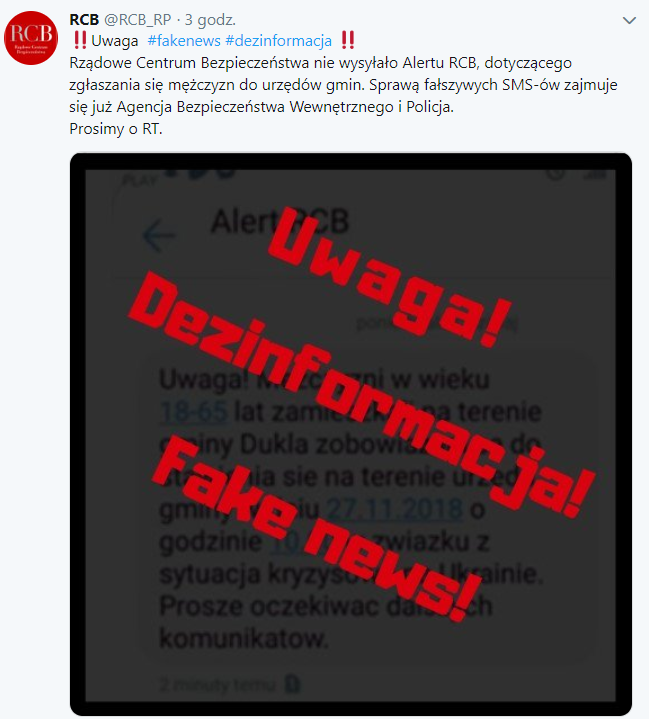 A new round of the conflict in the Sea of ​​Azov is one of the facets of the Russian-Ukrainian war in the broad sense, and it fits perfectly into the context of Russian hybrid action. The blockade of the Kerch Strait and the seizure by the Russian military of Ukrainian ships are just some of the means by which the Kremlin is trying to fulfill its main goals. One of those goals is the gradual disintegration of Ukraine, incited by systematic disinformation.

Translated by Andrii Gryganskyi, edited by Max Alginin .When using the information, an active link to the source is required.
(Creative Commons Attribution 4.0 International – CC BY 4.0) Press the repost and share with friends.
Subscribe to the InformNapalm community on Facebook / Twitter
and quickly get information about new materials.

No Responses to “Conflict in the Kerch Strait, Information War, and Destabilization of Ukraine”